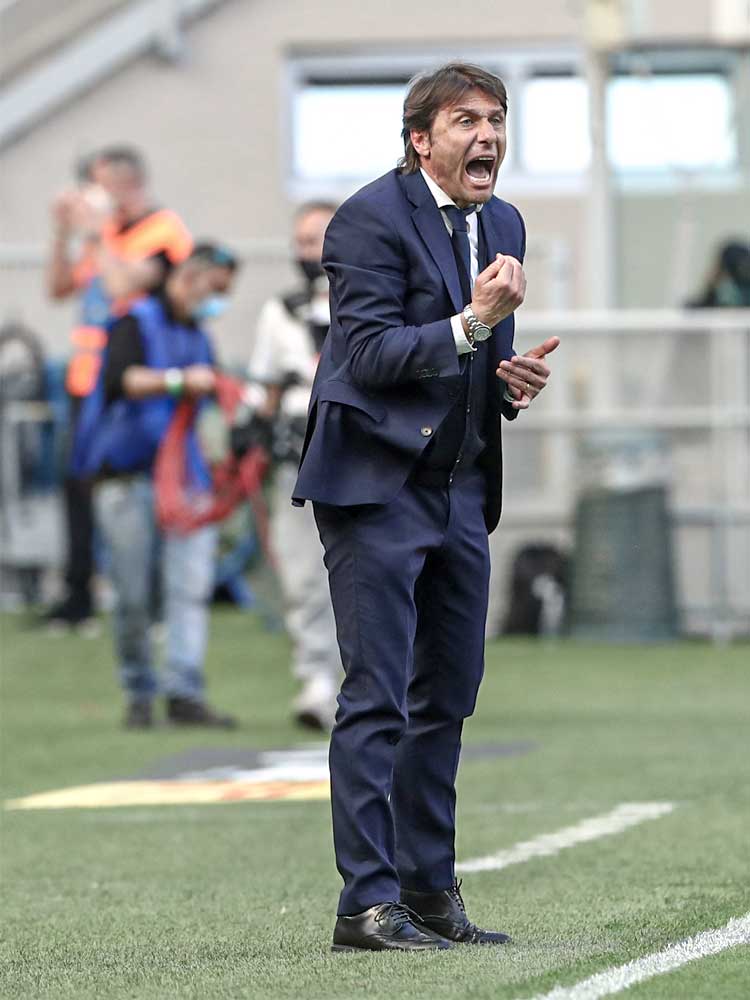 Profile
In the summer of 2019 Inter Milan turned to Antonio Conte, a favourite of their fiercest rivals Juventus, in their pursuit of the manager they hoped would return them to the top of Italian football for the first time since José Mourinho’s departure in 2010. Indeed, it was Conte who in 2012 delivered Juve’s first title since the Calciopoli scandal, and who laid the foundations for the extent to which they had since dominated Serie A.

After leading Italy to Euro 2016, Conte, then 47, also impressively inspired Chelsea to the 2017 Premier League title, but Inter – and largely because of the extent to which Juve had become so powerful – perhaps represented his greatest challenge. During 2019/20 they challenged for the title and were runners up in the Europa League, demonstrating significant progress, but so fierce a competitor demanded significantly more, and achieved that during 2020/21, ending Juve's nine successive titles by leading Inter to their first in 11 years with four fixtures still to play.

Playing style
Perhaps the greatest adaptation in Conte's approach took place while he was at Juve, where his preference for a back four was replaced by the in-possession 3-1-4-2 his other teams – Chelsea excluded – have often since used. Arturo Vidal, Claudio Marchisio and Paul Pogba offered direct, penetrative attacking runs from midfield (below), and Marchisio and Vidal were regular goalscorers via the forward runs they made ahead of Andrea Pirlo, who operated from defensive midfield.

As was the case when he managed Italy and Inter, Juve also regularly played passes around the corner that involved the deepest midfielder moving towards possession and bending a first-time pass over the opposition's defence into the space behind their central defenders. Those passes are complemented by a front two operating on different lines – one to draw a central defender out of position, the other to run on to the pass in behind and, potentially, into a one-on-one against the other central defender, overcoming their compact shape.

Italy's 3-1-4-2 was significantly more direct. They lacked a ball player of Pirlo's calibre at the base of midfield and they also had less technically gifted attacking midfielders, so Conte encouraged his wing-backs to adopt more advanced positions and his attacking midfielders to make wider forward runs to create overloads with those wing-backs. Their front two also remained as advanced as possible for as long as possible, complementing that direct approach and ultimately discouraging opposing central defenders from moving to assist the stretched full-backs alongside them.

At Chelsea, Conte instead built a successful team on a 3-2-4-1 formation that featured Diego Costa as their lone striker, supported by narrow inside forwards – two of Eden Hazard, Pedro and Willian – and two wing-backs in front of a double pivot. Individually, those defensive midfielders combined with the relevant wider central defender, wing-back and inside forward to create a diamond that encouraged the wing-back to remain wide, build forwards, and move play on to the inside forward. César Azpilicueta’s advanced positioning as a central defender strengthened Chelsea's defensive transitions – when they otherwise would have been vulnerable – and provided another proven ball player for the curved passes Conte demands. During 2017/18, Álvaro Morata particularly relished those passes.

Regardless of that shape inspiring Chelsea to the title, his return to Serie A with Inter involved Conte reverting to his 3-1-4-2 or 3-5-2. Their wing-backs – Ashley Young was among those recruited – combined with a wide-moving attacker or forward-moving attacking midfielder, or sought to beat defenders one-on-one and then deliver from a wide position. Their defensive midfielder was instead the one playing the set pass, and in a further adaptation the wing-back clipped possession forwards towards one of their front two – often doing so having cut infield on to his stronger foot – ensuring their strikers followed the ball away from goal, instead of towards it, as was previously the case.

The versatility of Romelu Lukaku and Lautaro Martínez also proved a strength. Both are as capable of holding the ball up as they are running in behind, and therefore complement each other when operating on different lines. There were also occasions when Alexis Sánchez was used in a front two to withdraw into a deeper position, or when a double pivot was used behind a number 10 – Sánchez or Christian Eriksen – supporting their front two. Marcelo Brozovic was most commonly the defensive midfielder instructed to play line-breaking passes (above) in their more familiar shape, and two of Nicolò Barella, Matías Vecino, Stefano Sensi, Roberto Gagliardini and Vidal made forward runs from central midfield to combine with those in more advanced positions.

That approach evolved during 2020/21 (above). While one of their front two – most consistently Lukaku – continued to move short, retain the ball and link with those making runs, their wing-backs increasingly made runs from narrower positions to penetrate through the centre of the pitch and to provide another threat on goal. Where for so long in Conte's teams those runs were mostly made by their attacking midfielders, on the occasions it was instead their wing-backs doing so, their central midfielders remained compact and in a position from which to potentially apply a counter-press. Even if they didn't immediately do so, the numbers they offered there could delay opponents until those wing-backs could recover their defensive positions.

By running into different positions – including towards the far post – Inter's wing-backs could deliver crosses from new angles and therefore increase the variety they offered; they also preserved Conte's favoured front two by one making that nature of run when either striker has withdrawn into a deeper position. Their presence there contributed to Inter's attacking midfielders increasingly operating from outside of the penalty area and, should those wing-backs be more central, drifting wide.

Defending and pressing
The introduction of a back three at Juve meant that Andrea Barzagli, Leonardo Bonucci and Giorgio Chiellini consistently featured in central defence, and gave Conte's attacking midfielders the freedom to make regular forward runs. When defending they reorganised into a particularly compact and organised 5-3-2 that gave opponents minimal space to attempt to play through – Conte's Juve proved particularly difficult to penetrate. If ever they looked vulnerable, it was after their attacking midfielders and wing-backs had made those aforementioned forward runs, and opponents were positioned to quickly counter. With only a single pivot offering protection in midfield, and an occasional lack of agility in their front two that undermined their attempts to counter-press and restrict opponents to their deep block, even a back three as experienced as theirs could become stretched.

A 5-3-2 mid-block and, when necessary, a lower block, have so far proved Conte's most successful defensive approaches. His front two is used to screen attempts to build play through central positions, forcing opponents to take play wider, and in the case of Italy at Euro 2016, limiting the potential of high-quality opponents like Toni Kroos for Germany and Sergio Busquets for Spain. A further effective trait that exists in his mid-block is the wider pressing traps that follow their front two forcing play wide; their three central midfielders shift across, covering against access through the inside channel and advancing towards the opposing full-back. With Italy, Daniele De Rossi superbly covered against access into their opposing attackers, and their wing-backs effectively limited spaces that otherwise would have existed in wide areas, protected as they were by the three central defenders behind them. Chelsea, and then Inter, regularly applied the same high press occasionally seen with Italy (above).

At Inter, the 5-3-2 they often defended with (above) sometimes became a 5-2-3 in which one striker worked to limit access into the opposing single pivot while the other striker and an attacking midfielder prioritised their opposing central defenders. Their wing-backs advanced to engage with the full-backs opposite them – even if that risks a three-on-three in defence – and the aerial strength that is consistent in his central defenders meant Conte's teams often pressed high to force direct balls and, ultimately, regains.

Though Chelsea's defensive shape was a 5-4-1 mid-block, they were less vulnerable at defensive transitions because of the double pivot that remained in front of their defence. They also pressed with greater aggression in midfield; their back five and their additional midfielder gave them the potential to press all three central lanes, and in more than one direction, protecting against opponents seeking to operate between the lines without sacrificing their defensive stability. When one of their wider central defenders advanced to a position alongside their double pivot, the inside channels were also covered when possession was lost in the attacking half, and their attacking players also applied pressure from behind the ball.

Inter had Serie A's best defensive record in 2019/20, through defending with what was typically a 5-3-2, but until 2020/21, as with Juve, there were occasions they were exposed at the point of defensive transitions. When their wing-backs and attacking midfielders advanced, their defensive midfielder could struggle to protect the central lanes. Given Inter's wider central defenders can be vulnerable when defending one-on-one against a fast and capable attacker, Conte experimented with a double pivot that featured one advancing to contribute to attacks alongside their number 10.

When they were defending with a mid or lower block, their central midfielders worked to provide defensive support in wide areas, the closest striker to screen access back infield, and their wing-backs to track runs along the touchline and attempt to press possession wide, often forcing opponents to return the ball to central defence should they want to switch play. If they did so, Conte's team adjusted to do the same on the opposite side of the pitch; the alternative was for opponents to attempt direct passes over Inter's block, which Inter would engage, and aggressively press or duel. Their wider central defenders pressed out from defence (above), and their attacking midfielders engaged wide as their wing-backs moved infield to track those making forward runs, ultimately maintaining the numbers Conte demands in the centre of the pitch.

In the same way their wing-backs' movements enhanced their attacking potential, they also made Inter's defence more resilient. Their back three and defensive midfielder received greater support because their attacking midfielders' positioning meant that they were considerably less exposed, negating many of the weaknesses both Inter and Juve previously demonstrated during moments of transition.

A further potential change existed in their approach to pressing high, when only one of the two wing-backs advanced and the three central defenders drifted across to form a back four, and their midfield three moved so that one operated similarly to the advancing wing-back. The remaining two then formed a double pivot and, for brief periods, Inter therefore pressed with a 4-4-2 from which they worked to keep the ball to one side of the pitch and in which their front two worked to both screen the centre of the pitch before pressing their opposing central defenders and goalkeeper.