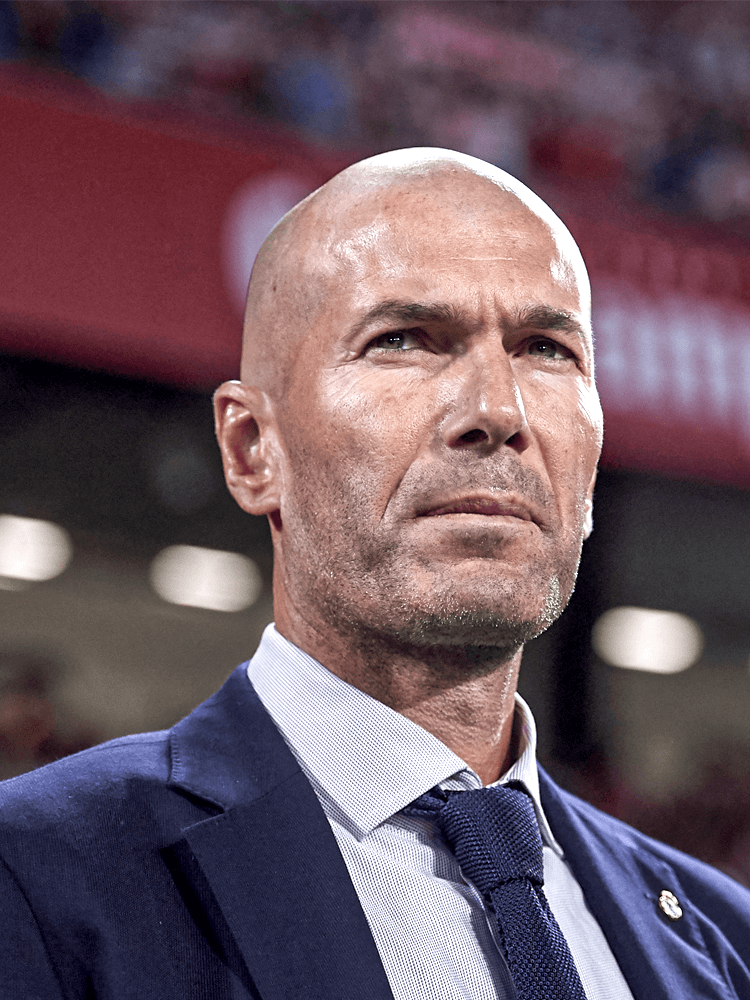 Profile
It was only 10 months after his resignation that Zinedine Zidane returned to manage Real Madrid. He first stunned those at the Santiago Bernabéu when he departed only five days after leading them to a third successive Champions League title in May 2018, having excelled since succeeding Rafa Benítez. Julen Lopetegui and Santiago Solari then had short periods as the club's manager before Zidane returned again, in March 2019, and restored a much-needed sense of stability.

He returned, however, to a squad weakened by Cristiano Ronaldo's departure to Juventus, and instead of managing a fine collection of players at their peak was being asked to oversee a period of transition and to develop a younger team. A further league title followed before Zidane left again in May 2021; perhaps more significantly, he oversaw the continued development of Marco Asensio, Federico Valverde and Vinícius Júnior, players expected to lead their new-look team. "Zidane is one of Real Madrid's great icons and his legacy extends beyond what he has achieved as a coach and player at our club," Real said in a statement when he resigned again.

Playing style
Consistent team selections and performances inspired so much of Real's success during Zidane's first period as their manager. For both of the 2017 and 2018 Champions League finals, for example, he used an identical starting XI; a more central role for Isco in 2018 was their only change. Even if his team evolved from using a 4-3-3 formation to a four-diamond-two during that period, their personnel remained similar.

It was also significant that they posed a balanced attacking threat. From goals scored in the Champions League, the competition that has long defined Real as a club – and which they dominated under Zidane until his first resignation – 16 assists came from the left side of their attack, 16 came from central positions, and 18 came from the right. Support offered by their advancing full-backs Marcelo and Dani Carvajal invited Ronaldo, Isco, Gareth Bale and Asensio to drift infield from wide starting positions when they were organised into a 4-3-3, and when that 4-3-3 became a four-diamond-two they became responsible for providing Real's width.

Zidane also prioritised playing his best players in their most natural positions for as long as possible. Ronaldo was perhaps the finest player in the world inside the penalty area for the period Real were managed by the Frenchman, and he was therefore moved from his a role as a left-sided forward who cut infield to shoot to a permanent central position alongside Karim Benzema.

Benzema also thrived from that change. His off-the-ball movements – particularly when withdrawing away from opposing central defenders – offered Isco freedom from his role as Real's number 10 that the Spaniard regularly used to combine with those positioned wide, often giving Ronaldo increased room (below) in the areas in which he was so influential. Him doing so also contributed to increased numbers in wide areas, leading to Real dominating in the territory their then-manager values.

After Zidane's return that desire to make the wide areas a priority continued. Ronaldo's departure contributed to Benzema being given a different role, and again within a 4-3-3 (below); he occasionally still withdrew from his starting position to link with those in midfield, but often remained more advanced than he did alongside Ronaldo. Many of those recruited – Eden Hazard, Rodrygo and Vinícius among them – are often at their best attacking around the outside of opponents, and combining inside with their attacking full-backs Marcelo, Carvajal, Lucas Vázquez and Ferland Mendy.

The demands on their central midfielders also subtly changed. Two of Toni Kroos, Casemiro and Luka Modric usually formed a double pivot, as an alternative to the occasions Kroos and Modric operated in front of Casemiro – as they did when winning three successive Champions Leagues. Valverde's emergence and deployment in those positions also offered further support around Benzema, and contributed to Isco adopting a wider position, as he did before Real moved to their four-diamond-two. Those operating from central midfield were encouraged to advance into the penalty area regularly, most commonly through the inside channels, between Benzema and those either side of him in their front three. That goals were being scored more evenly throughout Real's squad perhaps owed to that increased flexibility – there no longer existed the focal point that Ronaldo once was.

Pressing and defending
The extent to which Real's full-backs were encouraged to advance placed an increased importance on their defensive balance (below). If Kroos, Modric and Casemiro so often excelled in feeding those further forwards, when attacks broke down they combined impressively in front of their central defenders to negate attempts to attack on the counter.

When they adopted their four-diamond-two, Kroos' positioning towards the left and Modric's towards the right, meant that further diamond shapes existed among those attacking. Kroos and Modric were at the base of those diamonds which were led by the relevant striker and featured an overlapping full-back to one side and Isco to the other; the two midfielders, supported by the disciplined Casemiro, defended effectively on the occasions an opponent advanced. With two advanced full-backs contributing to the pressure being applied further forwards, and two strikers positioned to attack, Real were similarly effective when reorganising into a reserved 4-4-2.

Their return to a 4-3-3 ultimately contributed to a change in their counter-pressing approach. Real continued to press as intensely and as often, and still started doing so with a unit of five. Their full-backs were less advanced than they were required to be when playing behind a diamond midfield, so opponents were likelier to play longer passes, leading to Real regaining possession in deeper territory when they once would have done so close to their opponent's goal.

Through their wide forwards forcing the ball into more central areas, those in central midfield advanced through the inside channels as a second wave, when previously that second wave was formed by their advanced full-backs and number 10. That they therefore also retained four in defence meant that passes were often effectively negated, contributing to attempts to resist the pressure Real applied – often through rushed clearances – and the numerous regains made by the players Zidane selected in central defence.