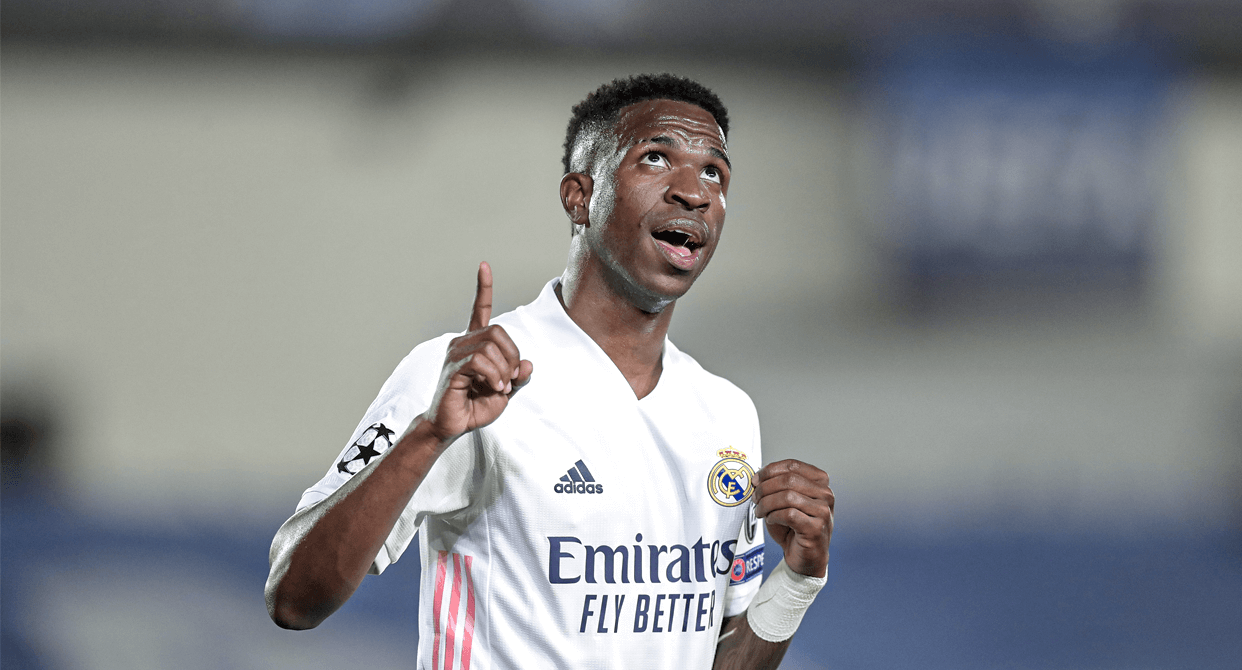 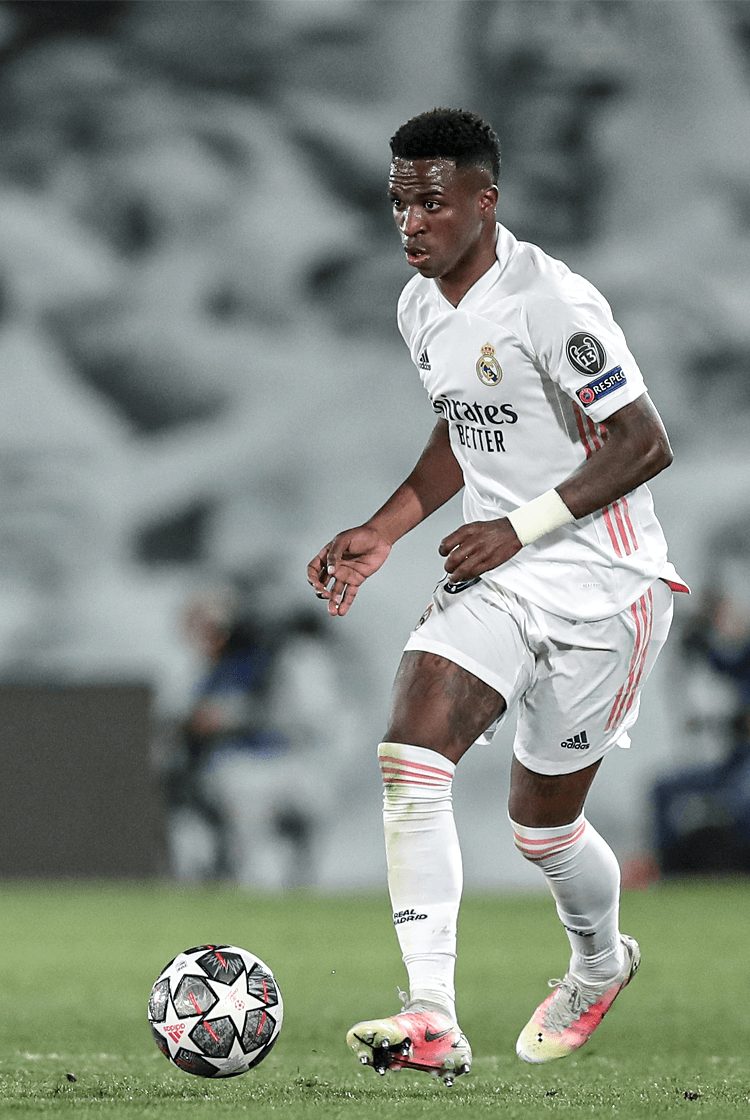 Profile
So convinced were Real Madrid of the talent Vinícius José Paixão de Oliveira Júnior possessed at the age of 17 that they signed an agreement to bring the youngster to Madrid in July 2018 – the day he turned 18 and was therefore permitted to leave his native Brazil. Comparisons were immediately made with compatriot Neymar, who moved to Barcelona at the age of 21, but while Neymar moved to join one of the game’s greats in Lionel Messi, Real signed Vinícius in the same summer that Cristiano Ronaldo left for Juventus, and therefore as a potential long-term replacement.

A hugely talented and highly regarded left-sided forward, Vinícius had a €30m buyout clause written into his first professional deal with Flamengo and, after making his debut, that buyout clause was increased to €45m. Real, wary of missing out on another Neymar, coughed up the cash to bring him to the Bernabéu.

Following an understandably slow start given how young he was when he joined one of the biggest clubs in the world, Vinícius has grown in importance and influence under Zinedine Zidane. “I'm delighted for him,” said Zidane. “We are seeing some fantastic stuff from him right now. We know how good he can be when he gets into space and he is showing that.”

Tactical analysis
Vinícius oozes confidence, and perhaps unsurprisingly given his Brazilian roots and favoured position as a right-footed, left-sided attacker, flair, flamboyance and dribbling ability are key components to his game. He is at his most threatening after having received a pass on the left flank against an isolated right-back. He tends to try and move infield and on to his favoured right foot, because when goes on the outside on his left foot, he is far less effective.

The youngster beats defenders regularly, doing so more often than not by pushing the ball past his opponent and quickly accelerating in the direction that he has moved the ball rather than through his manipulation of the ball and quick feet, like Neymar. He can do this to either side effectively and will be smart in how he pushes the ball, often moving it to one side of an opponent and then running around the other (below), and sometimes even lifting it over a defender before attempting to retain possession on the other side of them. Such is his confidence that he will also regularly try to nudge the ball through an opponent’s legs. He fails more often than not but there is no sign that he will not continue to try.

His impressive acceleration means that opponents cannot commit to closing Vinícius down too tightly if he receives the ball out wide. If he has the opportunity, he will gladly nudge the ball away from the player closing him down, into the space they have vacated and sprint after the ball. Instead, defenders tend to take a more conservative approach and stand off him if he is facing towards goal, leaving open the possibility that he will be able to build up some momentum as he runs towards the static defender, and may even be more difficult to stop. It is no coincidence that Vinícius wins plenty of free-kicks after being dragged back by a helpless defender.

His movement is extremely clever and a crucial part of what makes him so effective. He shows great awareness both of where space is and how to use it: he often uses quick in-to-out movements to draw an opponent towards the ball before spinning out into the space he has created (below). He isn’t a natural goal scorer though, and given how frequently he loses his closest marker – usually a player in the last line of defence – with a sharp movement, he does not score enough goals. Often his decision-making when one-on-one with a goalkeeper lets him down.

His short passing and link play is not a particularly strong side to his game, but he does show glimpses of ablity when combining in intricate areas around the edge of the area. If a pass is misplaced, Vinícius is quick to react and counter-press; a few of his goals in Real Madrid colours have come as a result of a turnover high up the pitch.

Role at Real Madrid
Vinícius plays almost exclusively on the left side of attack in Zinedine Zidane’s 4-3-3 for Real Madrid, though there have been occasions when he has been paired in a front two alongside Karim Benzema. His role remains consistent whatever the on-paper formation, though, with Benzema staying central and Vinícius keen to threaten the space in behind the opposition right-back. The right-sided attacker – usually Marco Asensio or Lucas Vázquez – will tend to play a different role to Vinícius, playing more of their football in front of or on the outside of their opposition full-back. Vinícius, on the other hand, will give his opponent a different problem.

His priority is getting goal side of the full-back, and he is constantly on the move, looking to try and get into that position. Given this, opponents tend to be wary of moving too far out of their slot alongside the centre-back, meaning that Vinícius is often able to find space in front of his opponent by moving towards play. From this position, he then tries to isolate his opponent and dribble at them.

To ensure that he remains a threat on the opposition’s goal, Vinícius is not required to provide the width on Real’s left side. He tends to drift into central areas whenever he can, and he will often use the run around the outside of left-back Ferland Mendy or Marcelo to create himself space to cut on to his right foot and cross (below).

He tends to float crosses rather than put curl on them after cutting back on to his right foot, but when he gets them right, they can still be extremely dangerous. He often manages to angle his crosses towards the far corner of the goal, meaning the goalkeeper will have to intervene if nobody gets a touch on the ball. This means the goalkeeper’s weight will shift towards that side as the ball travels, and any deft touch by a teammate attacking the ball can wrongfoot the goalkeeper. Assists have been too few and far between from Vinícius but he is still refining certain skills and this is one area in which he continues to improve.

Competition from Eden Hazard, an established left-sided forward who joined Real for a fee of £130m a year after Vinícius might have threatened the young Brazilian’s development. However, the reality has been far different: Vinícius has stepped up and become integral while Hazard’s form has nosedived after a terrible run of luck with injuries. While Hazard’s career appears to only be heading in one direction, Vinícius’ is very much on an upward trajectory.