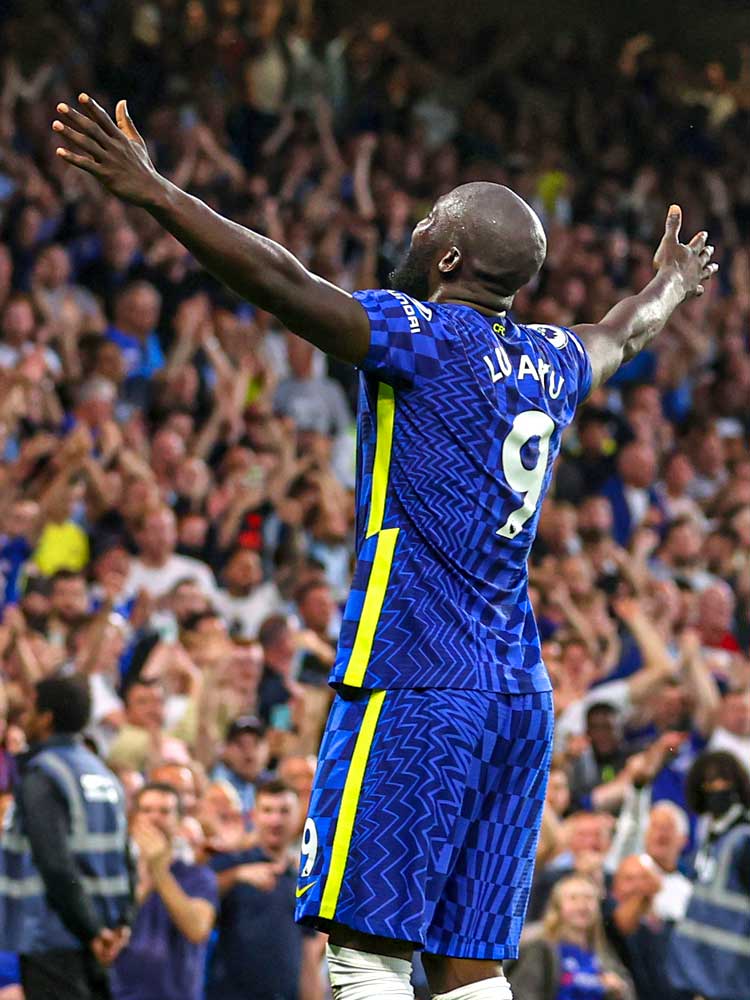 Profile
Chelsea paid a club record £97.5m to bring Romelu Lukaku back to the club from Inter Milan, where under their former manager Antonio Conte he evolved into one of the world's leading strikers, and perhaps to even become the long-term replacement they sought for Didier Drogba when first signing him for £20m in 2011.

Lukaku moved on to Everton for £28m in 2014, but aged 28 when his return was confirmed in August 2021, he is a player in his prime. Andriy Shevchenko, Fernando Torres and Álvaro Morata have all tried and failed to replace Drogba – Timo Werner could yet prove another – making Diego Costa's relatively short-term success the only time a high-profile striker has delivered what he was signed to do. The position of Chelsea's senior striker has therefore become increasingly pressured, but Belgium's Lukaku said: "I'm coming back with a lot of experience and more mature. To be back and trying to help them win more titles is an amazing feeling."

Tactical analysis
Lukaku is a powerful striker who, though more comfortable on his left foot, is also capable of striking the ball effectively with his right. He generates significant power while doing so, even if shooting from a static position, and is demonstrating improving balance both when shooting and when making off-the-ball runs.

When shooting with the inside of his foot, he remains relatively static; few movements are made until the relevant pass is played; he also often disguises his shots to put both the opposing goalkeeper and, if necessary, defender, off-balance. His ability to twist and turn with the ball at his feet, and to then strike it with either one, makes Lukaku a threat from most angles (below) and positions in the attacking third. That he is also strong in the air, and to the extent he can compete with the very best – particularly from inside the penalty area – enhances that threat.

That same strength and power is largely why he is so effective at driving forwards with possession and holding off opponents. He is quick on the counter, but even when defenders can match his speed they struggle to stop him because of his upper-body strength (below) and ability to protect the ball while on the move, which often ensures he eases past opponents – and to the extent he remains aware of his surroundings.

Another consistent and impressive trait exists in the forward movements he offers around his opposing central defenders, when supporting the ball and seeking forward passes. He excels at moving his opponent, and then moving again to receive the ball, when his timing creates the necessary room to receive and then potentially shoot at goal.

His link play is similarly effective. By pinning even the strongest central defenders (below), Lukaku creates opportunities to spin and drive in both directions, and often complements doing so by using his arms to keep opponents away from the ball. If combinations offer greater potential than him receiving on the move or attacking in behind, or indeed if teammates are better positioned, Lukaku adjusts by adopting positions between defenders and then dropping, and times doing so just before the ball is played.

That same sense of timing is extended to when he releases the ball, when he resists retaining it for so long that he risks being pressed from more than one direction. He, similarly, is capable of providing a valuable outlet and working to hold on to the ball for lengthier periods – particularly if pressure is being applied from behind him – to provide time for his teammates to make runs or adopt new positions as the opposing defenders attempt to adapt to Lukaku's movements.

Role at Chelsea
Though there have been occasions Chelsea have used a similar 3-5-2 to that almost perfected by Inter under Conte, their most consistent shape is a 3-4-2-1 led by Lukaku and in which he is supported by two 10s. As in Italy, it is a regular feature of Lukaku's game for him to receive passes while occupying opposing central defenders and using his significant upper-body strength to hold them off.

The close support offered by the two 10s behind him (below) means that he often has an additional forward runner in central territory whose feet he can play into when he has already drawn the attention of the central defenders opposite them. Mason Mount, Christian Pulisic, Kai Havertz and Werner have also been seen making runs to ahead of the ball, similarly to those made by Alexis Sánchez and Lautaro Martínez in Milan.

The instinctive runs made by his teammates at Chelsea regularly capitalise on Lukaku's willingness to withdraw into deeper territory and tempt an opponent out of position; that there are also times both 10s simultaneously run through both inside channels invites the striker to turn and link both ways, when previously at Inter he was mostly limited to Martínez's movements to his left. There is therefore ultimately less need for Lukaku to retain the ball for the same period of time, encouraging him to play off of fewer touches, and then to spin and run forwards into more effective shooting positions at an earlier stage after releasing the ball. The support provided by Chelsea's 10s also leads to Lukaku using them as decoys when rolling defenders before advancing with the ball at his feet.

That wing-backs are such a consistent feature of Chelsea's attacking play, similarly, enhances his effectiveness. Marcos Alonso, Reece James, César Azpilicueta and Ben Chilwell are all encouraged to attack into advanced territory and to continue to provide their attacking width, and crosses. Rotations between those wing-backs and Chelsea's 10s continue to unfold and take those wing-backs into goalscoring positions, also therefore continuing to present Lukaku with decoy movements and teammates to link with.

There are regardless occasions when it's Lukaku's movements in the final third (above) that instead impress. When possession is being built through wide territory, or during moments of transition, he can be seen making two movements – one to draw his opponent to create space, and the second to attack the ball, as he so often does when targeting direct passes from those in central midfield. If confronted by lower defensive blocks, Chelsea's link play is more heavily influenced by their two 10s, and complemented by Lukaku making movements in behind.

That their wider central defenders advance to combine with the relevant wing-back presents Lukaku with a wide variety of deliveries that complement his movements. He, crucially, demonstrates a similar variety of finishing techniques from inside of the penalty area – he continues to score with headers from both set-pieces and open play, and with strikes off of both feet.