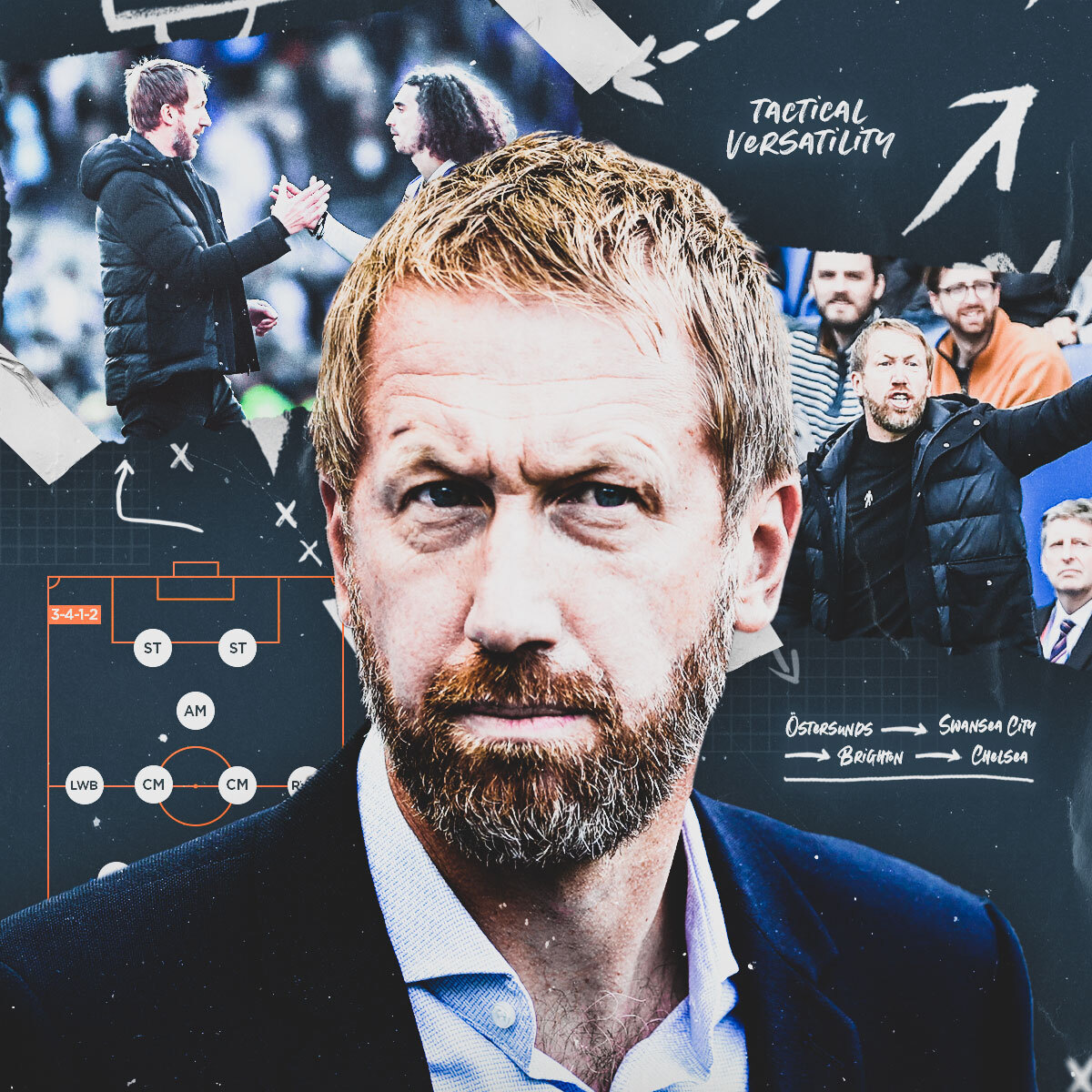 With his appointment as manager of Chelsea, Graham Potter has completed an astonishing rise through the game. After studying football while working with the Leeds Metropolitan University team, Potter went to Sweden, where he took over at fourth-tier Östersunds. He took them all the way to the first division and into the Europa League, where they enjoyed famous wins over Arsenal and Galatasaray. (Potter explained the tactics behind the latter of those victories in this exclusive Coaches' Voice masterclass.) His work caught the eye of Swansea City, who appointed him as manager in 2018, but it has been his success at Brighton between 2019 and 2022 which has earned him his new role.

In his third season at the Amex Stadium, he guided Brighton to their highest ever top-flight finish, when they came ninth. He departs with the club fourth in the Premier League in 2022/23, two places above Chelsea, who he now joins.

Potter replaces the Champions League-winning Thomas Tuchel at Stamford Bridge, having forged a reputation as one of the best English managers in the game at present. During his time at Brighton, he oversaw memorable wins over Manchester United, Liverpool, Arsenal, Tottenham and Manchester City. City manager Pep Guardiola was effusive in his praise for his opponent.

"We were in front of the best English manager right now," Guardiola said after a fixture between City and Brighton. "As a spectator, I like to watch these teams. I like watching Brighton play. I recognise it. When I was a football player, I would love to play in this team."

In a seven-year stint from 2011 to 2018, Potter led Östersunds from Sweden's fourth division to the top tier. He did this with the team starting in what was on paper a 4-4-2 (below), but the fluidity he likes from his teams was clear to see from the start. The wide midfielders generally held the team’s width and one of the front two consistently dropped to create a 4-2-3-1. When he came up against deeper defensive blocks and wanted his team to be more adventurous, the team's shape resembled a 4-2-4, with their full-backs pushing right up the pitch.

Potter showed an early preference for wide players playing on their 'natural' flank and attacking around the outside of their opposing full-backs. In each of Östersunds’ three seasons in the Allsvenskan under Potter, they recorded the highest number of dribble attempts, but very few crosses. This was due to Potter giving his players the freedom to try and beat their opponent but asking them to make diagonal passes back infield after going wide; the wide players on their natural side were not asked to attack the byline and put crosses into the box. Instead, one of the two strikers would usually drift towards the wide midfielder to combine with short passes. The far-side wide midfielder, meanwhile, moved infield to preserve the front two.

Potter used a 4-2-3-1 in his one season at Swansea, with a focus on possession-based football. A solid double pivot allowed their attacking full-backs to push on, and Kyle Naughton – a right-footer playing at left-back – came into central areas to create overloads and encourage combinations through the middle of the pitch. It was an attack-minded set-up, and Swansea registered the fifth highest xG in the Championship, despite finishing 10th.

At Brighton, Potter consistently changed system. A 4-4-2 and 4-2-3-1 have been used, but a back three – in a variety of shapes – has been more common. He also changed the personnel he used regularly, requiring subtly different rotations from his attacking players depending on the opponent. He likes to use players who can perform a number of different roles and change position constantly during games – the likes of Pascal Groß, Alexis Mac Allister, Solly March and Leandro Trossard have all been used in several different positions, for example. Potter also asks a lot from his forwards, and he likes to have energetic players in his front line, such as Neal Maupay, Danny Welbeck and Trossard. His attackers often drift out wide to support an advancing wing-back, creating space for central midfielders or the wing-back to make a direct, off-the-ball run into attacking areas.

Potter regularly used a 3-4-2-1 in which two attacking midfielders support a lone striker (above) and form a four-player central midfield box which could overload opposing midfield threes. The wide centre-backs in this shape were encouraged to get forwards regularly – Ben White and Dan Burn did so particularly effectively – to support the wing-back on their side. There was a fluidity to their shape that opponents consistently struggled to deal with.

In 2021/22, Potter turned Brighton into a more possession-based side, with his side making the fourth most passes in the Premier League. Potter continued to use a variety of formations and structures across the campaign – they started their 38 league games in 13 different formations – with a commitment to tactical flexibility depending on the opposition.

As was the case throughout his time at Brighton, they once again underperformed their expected goals return. Potter’s Brighton sides routinely created enough chances to win games but failed to take them, and that was again the case in 2021/22. Skilled wide players in Marc Cucurella, Tariq Lamptey, Pascal Groß and Joël Veltman provided the width and made constant penetrative runs into the final third. After Burn had departed for Newcastle, Cucurella played more as the left centre-back, and from there, he provided runs through the inside channel. Potter is clearly happy asking a converted centre-back or a converted full-back/wing-back to do this role.

Build-up around the opposition was key for Brighton, and wide rotations helped them progress and also change the point of their attack. Potter’s use of a number 10 such as Mac Allister, Trossard or Groß helped occupy the opposing centre-backs, as it was very common for the centre-forwards to move out wide to create space for a runner through the middle.

The inside channels were also key for Brighton as their central midfielders would also push forward to join attacks, rotating with the number 10 to add further support to their wider build-up, while still providing cover against opposition transitions.

Under Potter, Östersunds mostly used an out-of-possession 4-4-2 (below), regardless of their in-possession structure. If they were attacking with a 4-3-3, one of the wingers would drop back into the midfield unit, with one staying high alongside the centre-forward. The front two focused their attentions on blocking the central lane and forcing play out wide.

When the ball went out wide, there were similarities in their defensive play to the aggressive man-marking approach of Marcelo Bielsa’s Leeds. Their full-back and wide midfielder followed their direct opponents very closely, and were very aggressive with their pressing. The central players held their positions and used a more zonal approach to create a hybrid system that combined intense pressing out wide and screening players in the middle of the pitch.

As was the case with Brighton’s attacking approach, the quality of Potter's options meant plenty of variety to his defensive systems. He showed a preference for a double pivot protecting the defensive line, and when he played with two 10s, they moved out wide with the aim of preventing the opposition from playing passes back infield. Again, when play was forced wide, they applied aggressive pressure to both lock the ball close to the touchline and try to win it back.

When the opposition have possession for longer periods, Potter asked his Brighton side to drop back, and he used both mid and low blocks. When playing with a back three in possession, they withdrew into a 5-4-1 or a 5-2-3 (above). Whatever the shape, Potter consistently asked Brighton's two defensive midfielders to cover lots of ground across the pitch when play is switched. The aim was to force play into the wide areas, which not only moved play away from goal, it also creates space for Brighton's attackers to counter into following a regain.

When they had the opportunity to press, though, Potter encouraged his team to do so. They pressed, duelled, tackled and made interceptions often – they were the fourth most aggressive team in terms of defensive actions in the Premier League in 2021/22. Much of this came from counter-pressing in central areas due to the presence of two number 10s and two pivot players in their 3-4-2-1.

With a significant amount of their attacking play coming down the flanks, when they lost the ball here, they used the touchline as an extra defender, which helped them regain the ball effectively in advanced positions. This also meant they didn’t withdraw into a deeper block as early as they had in previous years under Potter. His central defenders were also encouraged to jump out to join the press if the opposition broke the first lines of Brighton’s press with a vertical, line-breaking pass. The centre-backs often followed their direct opponent deep into the opposition’s half as a result. Whatever the phase of play, it was easy to see how fluid Potter wanted his teams to be.

At every opportunity, Brighton attempted to lock the ball wide, and their centre-forwards would press the ball from behind, curving their runs outwards to stop their opponent from recycling play through the goalkeeper (above). This helped Brighton’s wide players engage the ball, with pressure coming from several different angles. The players on the far side then narrowed aggressively to make the pitch as small as possible and help the team to press.

Potter's hugely impressive Brighton side have got the plaudits they deserve, and it is no surprise to see him finally given a chance at one of the Premier League's top clubs. The biggest challenge for him may well be getting his ideas across to a team full of stars, which is something he has never had to do before. Time will tell if he can be a success at the top end of the Premier League and Europe.