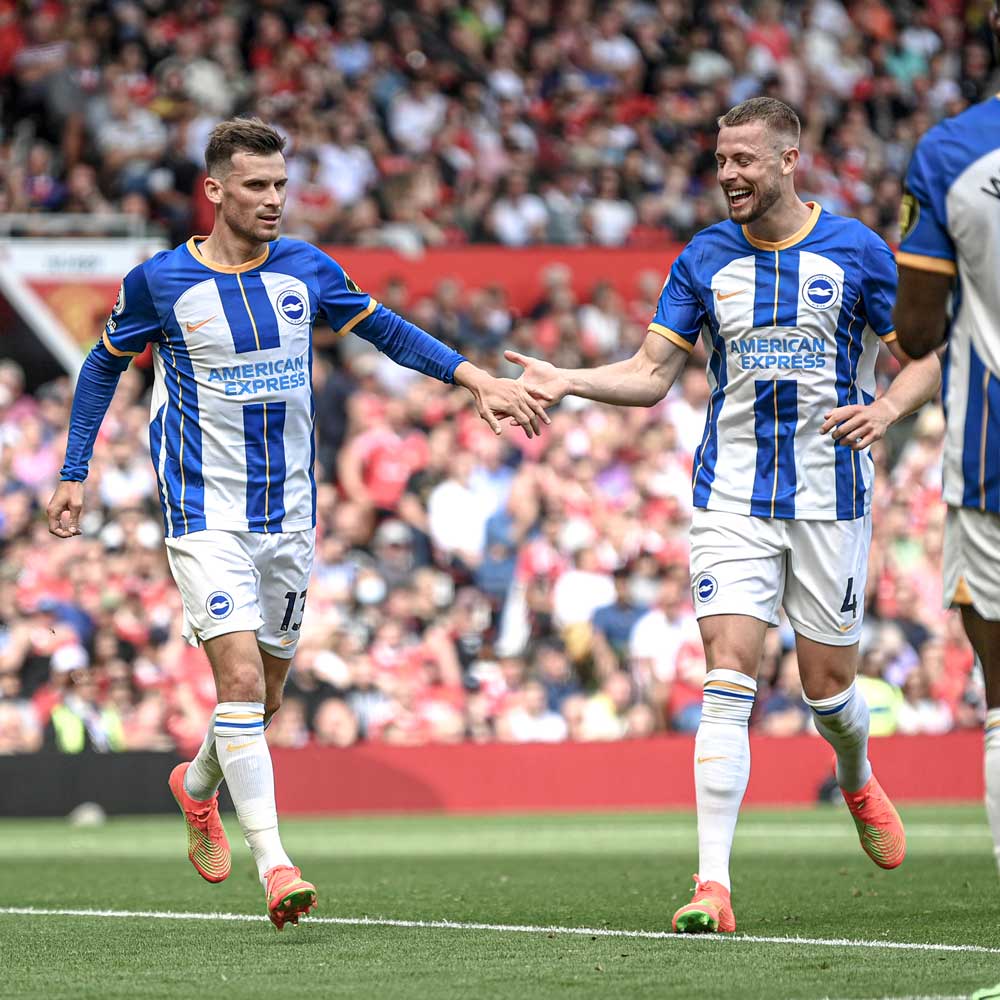 Erik ten Hag's Manchester United reign got off to a forgettable start as Brighton earned a memorable win at Old Trafford. Pascal Gross struck from close range midway through the first half, before he doubled the visitors' lead nine minutes later. United pushed hard to get back into the game, and an Alexis Mac Allister own goal halved the deficit, but even the second-half introduction of Cristiano Ronaldo was not enough for the hosts to find an equaliser. Following a miserable 4-0 defeat to Brighton in May, United fell to a second successive defeat against Graham Potter's impressive side.

“It is a hell of a job [that we have to do] – we have to work really hard, analyse and then move forward,” Ten Hag said after the game. “Today was a good start, and then after that we dropped down a level in belief and we made mistakes that the opponent punished. But it was a good opponent. We worked well together, but when you make mistakes you get punished for that.”

“I have got a fantastic group of players that have got ambition," said Potter. "They give everything every day.”

Movements through the inside channel

Manchester United were set up in a fluid 4-2-3-1 structure. During their build-up in the first half, Christian Eriksen dropped away from his starting centre-forward position, while Scott McTominay pushed forward from the double pivot, moving through the right inside channel. Bruno Fernandes then adapted as the 10, drifting into the left inside channel, while the wingers, Marcus Rashford and Jadon Sancho, aimed to stretch Brighton’s three centre-backs across the pitch by taking up very wide positions. The aim here was to create space in the inside channels for McTominay and Fernandes, as well as full-backs Luke Shaw and Diogo Dalot. They underlapped often, or inverted to provide support around Fred, who was now a single pivot (below).

Eriksen often dropped very deep, almost acting like another pivot. This provided the trigger for United to develop their left side further. Fernandes moved even wider on the left, while Rashford became the centre-forward. Shaw continued to push forward from left-back, but held the width when Rashford moved into a central position (below). United’s right side was less inventive, meanwhile. The hosts struggled to create chances from their sustained possession, and only really looked threatening when breaking from deep.

The second half initially saw Eriksen hold a deeper position, accompanied by Fred and Fernandes as a central three, although Fred was withdrawn early in the second half as Cristiano Ronaldo entered the fray. Both full-backs then pushed forward to provide the team’s attacking width, with Sancho and Rashford offering more presence closer to goal. McTominay still pushed forward, but he took up positions similar to Eriksen early on in the match. After Ronaldo was introduced, Brighton dropped back into a more settled out-of-possession back five, defending in a 5-3-2 low block. United pushed forward with a more permanent central attacking three in Ronaldo, Rashford, and Sancho, but still struggled to break their opponents down.

Donny van de Beek was introduced to form a rotating and attacking central-midfield three with Eriksen and Fernandes. Both full-backs continued to push forward, and held very high positions as Ronaldo dropped to connect with central midfield. Shaw and Dalot stretched Brighton’s back line of five, with Ronaldo then spinning out and joining Rashford and Sancho to threaten from crosses and cut-backs. However, Brighton’s back five and low block guaranteed sufficient defensive numbers to deal with most of the home side’s attacks. Brighton lacked any attacking threat in the second half, but they frustrated the home side with their organised block and only conceded a goal through a messy set-piece.

Graham Potter set Brighton up in a fluid 3-4-2-1 attacking shape, which at times converted into a 3-4-3 with a very wide front line. On the left, Leandro Trossard operated in a wing-back role, pushing high in attack against Manchester United right-back Diogo Dalot (below). Centre-forward Danny Welbeck occupied the space between the hosts’ two centre-backs, with Solly March attacking wider from the right side. March and Adam Lallana started as the two number 10s in the 3-4-2-1 and would individually drop to form a midfield diamond and numerically overload United’s midfield three. Pascal Gross provided extra support from right wing-back, often inverting as an extra player between the lines – this was particularly useful when Lallana or March held the width on the right. Welbeck was instrumental in securing more direct central balls, as well as running beyond to penetrate the hosts’ back line. This was seen in the opening goal, when his low cross found Gross to finish at the far post.

Exploiting transitional spaces between the lines

With United looking to use lots of rotations, Brighton were able to exploit spaces between the lines on transition – especially as they were proactive in terms of their defensive positioning. Using attacking players such as Gross and Trossard as wing-backs meant that they didn’t just instinctively drop into a back five when defending. Instead, they held higher positions throughout the first half, ready to attack after a regain. Brighton’s second goal exploited the lack of compactness between the hosts’ back line and central midfield (below). The visitors were able to build quickly from their own half using their fluid number 10s, with Gross eventually popping up on the left to tap in the rebound from March’s initial shot.

Brighton had only limited spells of possession in the second half, so had to make more use of a defensive back five. March played as the left wing-back after the break, with Trossard closer to Welbeck in what looked like a more defined centre-forward pairing (below) during the spells they had with the ball. Lallana and Moisés Caicedo pushed forward through the inside channels from central midfield, with Gross still attacking from the right side. Brighton also occasionally built play with a back four in the second half, keeping an extra player back in the back line. This allowed their central midfield to recover back when they lost the ball, protecting against United’s direct counter-attacks and runs beyond. Ultimately, though, they held out to secure a very impressive first win of the new Premier League season.