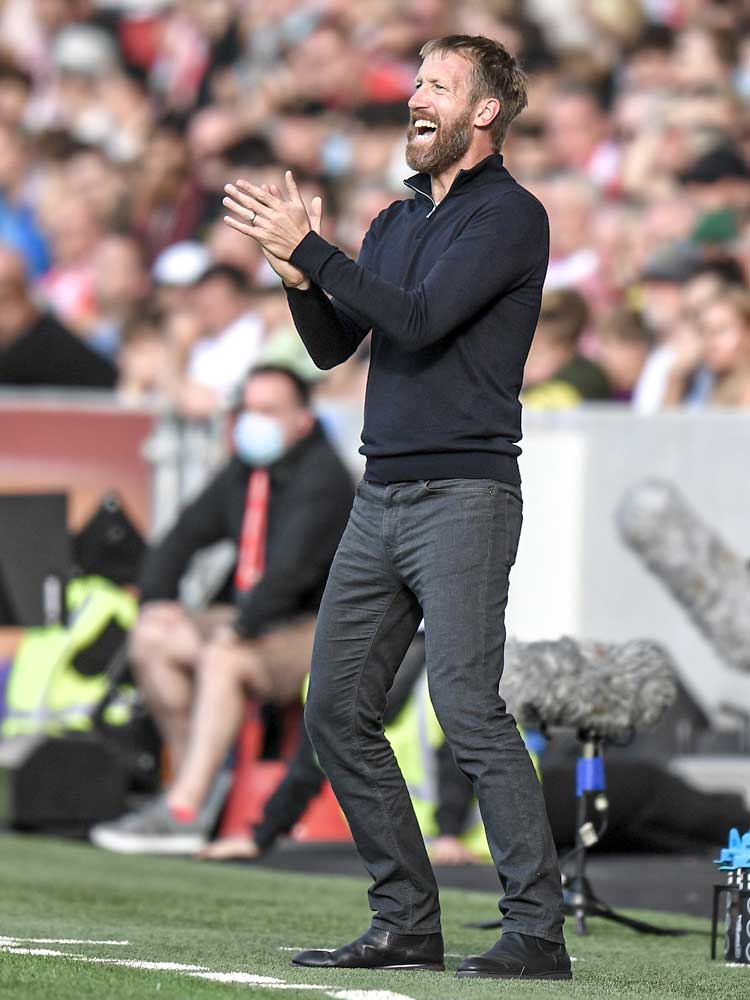 The gradual transformation of Brighton into an expansive, flexible team, along with their consistent improvement, has enhanced Graham Potter’s reputation as one of English football’s leading coaches. Working effectively with their technical director Dan Ashworth, Potter’s methods – for which he was admired with Östersunds and Swansea City – have continued to evolve.

None other than Pep Guardiola, widely regarded as one of the greatest coaches of all time, is among those to have expressed his admiration for Potter, who was just 44 when he succeeded Chris Hughton at Brighton in May 2019. After a period in which few English managers built particularly strong reputations, Roy Hodgson and Harry Redknapp have been followed by Potter, Gareth Southgate, Dean Smith and Eddie Howe. “We were in front of the best English manager right now,” Guardiola said after one fixture between Manchester City and Brighton. “As a spectator, I like to watch these teams. I like watching Brighton play. I recognise it. When I was a football player, I would love to play in this team.”

Playing style
Östersunds, who Potter led from Sweden’s fourth to first division, were mostly organised into a 4-4-2 (below), but his desire for fluidity meant that even while they did so, they often adopted different shapes. Their wide midfielders retained their positions, but rotations between their front two often meant one withdrawing to create a 4-2-3-1, featuring cautious full-backs. On other occasions against deeper defensive blocks, a 4-2-4, in which their full-backs were more adventurous, was favoured.

The individual roles given to his players also changed. Saman Ghoddos, who moved on to Brentford, was used both on the left and as a striker who linked and combined with wide players. Ken Sama, later of Watford, and Hosam Alesh, on the left and right, respectively, demonstrated Potter’s preference for wide players playing on their ‘natural’ flank and attacking around the outside of their opposing full-backs. In each of their three seasons in the Allsvenskan under his management, Östersunds recorded the highest number of dribbles when attacking one-on-one, but very few crosses, due to of a preference for close combinations, penetrative forward passes, and diagonal passes back infield. Their attacking style and the use of a front two supported their wide midfielders’ attempts to progress possession; the closest striker drifted towards that midfielder, so the far-side wide midfielder moved infield to preserve the front two.

A 4-2-3-1 became Swansea’s most-used formation during Potter’s solitary season there. The presence of a double pivot provided cover behind their attacking full-backs, and they put a focus on short passing and building possession through their double pivot to encourage others to rotate. During 2018/19, Swansea recorded the Championship’s second highest number of passes, and its lowest total of long-range passes. Their central midfielders, among which Leroy Fer was prominent, connected possession into the inside channels and out wide, and resisted advancing to instead encourage their wide forwards, number 10 and striker to attack.

Martin Olsson was favoured at left-back until the right-footed Kyle Naughton replaced him, and attacked from behind the right-footed Daniel James. Connor Roberts regularly advanced from right-back and provided effective off-the-ball runs. Both full-backs, regardless, were regularly used on both sides of the pitch (below) across the course of the season, enhancing the potential for combinations through the inside channels. When those combinations occurred, the full-back moved infield and penetrated forwards via diagonal dribbles, or made off-the-ball runs similar to those made by Östersunds’ wide midfielders. Also reminiscent of Östersunds was the use of Wayne Routledge, Barrie McKay and Nathan Dyer in different attacking roles – mostly as their two wide forwards. Wide forward and full-back rotated regularly, as did wide forward and number 10, contributing to Swansea’s xG total being the division’s fifth highest, regardless of the fact they finished 10th.

Both systems – a 4-4-2 and a 4-2-3-1 – have also been used at Brighton, but a back three, and a 3-4-1-2, has been significantly more common. Their front two will occupy their opposing central defenders, and are regularly supported by a number 10 (below) – mostly Leandro Trossard – and a double pivot, but Potter has continued to change his personnel, perhaps in pursuit of the specific rotations he favours against each opponent. Pascal Gross and Alexis Mac Allister have therefore both also featured as their 10, and Neal Maupay, their leading striker, has been paired with Aaron Connelly and Danny Welbeck. The attackers often drift wide to support an advancing wing-back, and a defensive midfielder also sometimes makes forward runs if Brighton are no building patiently in the way Potter’s Swansea did.

Potter has also regularly experimented with a 3-4-2-1 in which two attacking midfielders support a lone striker and form a central midfield box. Brighton’s ability to make those changes mid-match has helped them regularly penetrate forwards and break lines via quick combinations.

Their combinations help them progress around opposing defensive blocks and – not unlike Sheffield United under Chris Wilder – Brighton’s wider central defenders have supported their attacks. Throughout 2020/21 Ben White, who has since moved on to Arsenal, impressed when doing so on their right; Dan Burn attacked on the left to add an additional aerial threat in the penalty area.

With their double pivot and the nearest attacking midfielder moving wide to support those combinations, the attacking players on the far side of the pitch move infield to get closer to the lone striker. Östersunds’, albeit from a different shape, did the same.

Defending and pressing
Östersunds mostly used an out-of-possession 4-4-2 (above), even when they attacked with a different in-possession structure. If they were attacking with a 4-3-3, one of the wingers would drop back into the midfield unit, with one staying high alongside the centre-forward. The front two focused their attentions on blocking the central lane and forcing play out wide. They curved their movements as the ball was passed across the opposition’s back line, only moving out to engage the ball carrier if the ball was there to be won.

In wide territory, they often used a similar defensive strategy to the aggressive man-marking approach of Marcelo Bielsa’s Leeds. Though they assumed more of a zonal approach that involved them screening, rather than pressing, their full-back and wide midfield pairs followed their direct opponents very closely. Should the winger press outwards, and the central midfielders hold their position, then the Östersunds’ full-back would jump out of the back line. Here, they defended the inside channel but were still extremely aggressive in their individual pressing. When the wide midfielder held their position, meanwhile, Potter’s full-back stays in the back line, narrowing to remain close to the two centre-backs.

Swansea, regardless of their starting 4-2-3-1, mostly defended in a 4-4-2, via their 10 advancing to form a front two. They also sometimes set up in a 4-4-1-1 in which their 10 held his position to support their double pivot against an opposition midfield three. When that was the casem their wide forwards started deeper, encouraging opponents to progress forwards without the intense press that was applied from their 4-4-2.

At Östersunds, when a full-back moved forwards from their defensive line, they had less cover in central midfield, tempting opponents to attempt quick combinations and work possession back infield if the wide midfielder was also advanced or hadn’t tracked back. At Swansea, however, the presence of a 10 (above) meant one of their defensive midfielders having the freedom to withdraw to where he could support their back four, in turn freeing up their full-backs and wide forwards to move out to press, and potentially make regains in advanced territory.

As with their attacking approach, the increased number and quality of Potter’s options has meant Brighton using both of his previous favoured defensive systems, as well as a back five – via their wing-backs withdrawing into deeper positions. With their double pivot protecting the spaces in front of their defensive line, their two 10s move into wider territory to prevent forward passes back infield and, via aggressive pressure, attempt to keep the ball close to the touchline; their wing-backs, similarly, have the freedom to press forwards, and are often supported by a 10 and striker.

The foundations for that defensive pattern could be seen at Östersunds, where the full-back, instead of the wing-back, was instead the one pressing outwards. There is also the potential for a defensive midfielder to move across and support Potter’s press, as they most often will when the 10 hasn’t done so or has been beaten one-on-one.

Should the opposition have possession for longer periods, Brighton will instead withdraw into a 5-4-1 or, if they have started with two strikers, a 5-2-3 (above) and a mid or low block in which their focus is on funnelling possession into wide areas, from where crosses can be defended against in numbers. Potter consistently asks Brighton’s two defensive midfielders to cover lots of ground across the pitch – potentially from side to side when play is switched – and his attacking midfielder to retreat to support them. Doing so encourages opponents to advance into wide territory, which in turn creates space for Brighton’s front two to attack into when countering forwards following a regain.