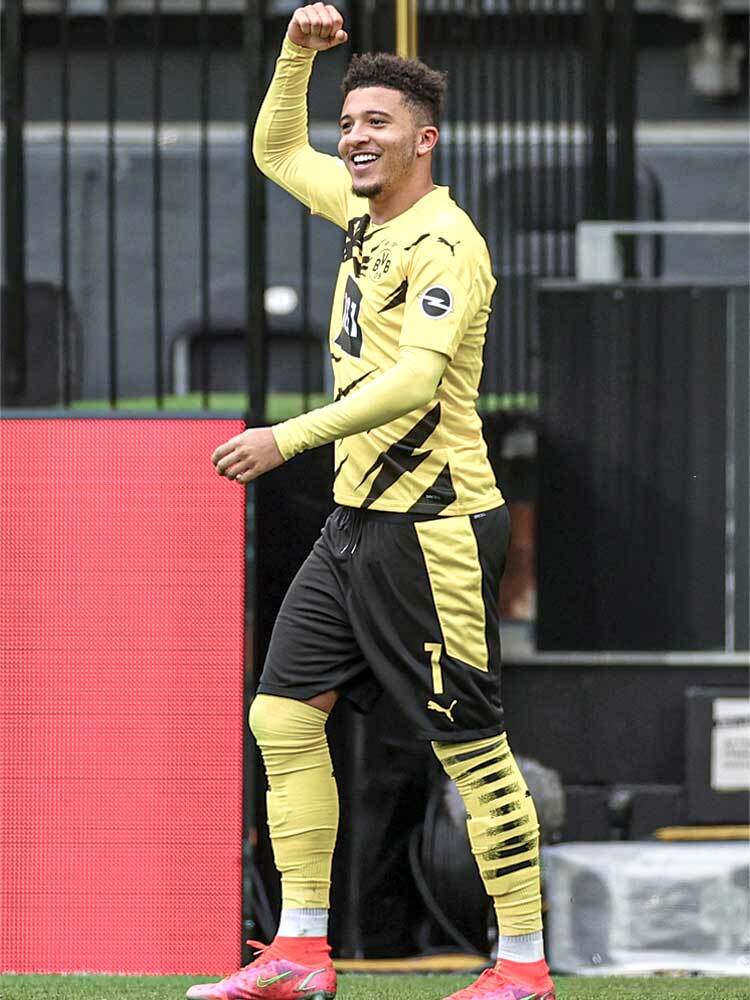 Profile
Manchester United's Jadon Sancho threw himself into the great unknown when, at the age of just 17, he took the bold decision to leave Manchester City for Borussia Dortmund. Having decided there were too many hurdles in his path into the first team at the Etihad, Sancho moved to the Bundesliga, where he shot to stardom, hitting double figures for both goals and assists in successive seasons – a feat few players achieve in their entire career, let alone before their 21st birthday, as Sancho did.

He broke records from the moment he moved to Germany, becoming the first ever player born in the 2000s to score twice in a Bundesliga match, and the youngest ever to do so for Dortmund, before becoming the youngest player to score 10 Bundesliga goals in a season. It was, then, no surprise to see him swiftly break into the England squad, where he has become an important player under Gareth Southgate.

Tactical analysis
Sancho is a particularly talented dribbler, and it is that side of his game that produces the most eye-catching and effective football. He is capable of exploding away from a standing start and swiftly reaching top speed, and he manipulates the ball superbly even when moving at pace. He uses small, quick touches to change direction before bursting away from opponents (below), or to come to a stop, take stock of his surroundings and move away from pressure. When advancing he uses simple, effective drops of his shoulders to put opponents off balance and, from there, uses his brilliant close control and balance to take advantage. He is hugely effective in one-on-one situations.

His ability to take lots of touches can, however, sometimes undermine his progress; if an opposing defender can match him for pace over a short distance, a high volume of touches can slow him down and reduce his chances of beating them. Few opponents are capable of staying with him over larger distances, but if he is carrying the ball infield, those touches not only help a defender keep up with him, but also invite them to make an attempt to steal the ball.

His technique when receiving a pass isn’t the most orthodox, and hints at a touch of the street footballer about his game. He often receives with his back to goal – even when wide – which becomes a trigger for an opponent’s press, but because of his acceleration and speed he can capitalise on his opponent’s movement. As the ball comes his way, Sancho will check what’s behind him and take a lateral touch around the advancing defender before exposing the space they have left behind them (below). He is lightning quick and spots opportunities to sprint into space quickly, giving his opponents little chance to react.

His vision and passing ability are an underrated part of his game, and he has the ability to thread an inch-perfect through ball between defenders and into the path of a teammate running through on goal (below). His short passing game and decision-making – particularly regarding when to release the ball – are becoming a further asset. He used to carry possession into crowded areas of the pitch too often, he has become better at using combinations with his attacking teammates before making a penetrative run off the ball to receive a return pass.

It is extremely difficult to stop him in these situations and he is a huge threat to the space in behind the opposition’s defensive line. He scores goals regularly, often after breaking beyond the opposition’s defence and finishing coolly, and he is also adept at coming off the left flank to shoot with his right foot. He is able in these situations to curl the ball into the far corner of the net, and has scored some brilliant goals this way.

Role at Borussia Dortmund
Sancho has largely been used as a right-sided forward during his time in the Bundesliga but, as with England, there have also been occasions when he has been used on the left. Under four different managers at Dortmund, Sancho adapted impressively to changes in system and changes to his role, though the club has generally used a 4-2-3-1 formation, and it was in that formation that Sancho impressed over the course of 2018/19 and 2019/20 under Lucien Favre. He also showed his versatility, though, in continuing to perform well following a switch to a 3-4-3 formation, in which Sancho played as one of the two narrow 10s behind a lone centre-forward.

Sancho combined well with that forward, whether it was Paco Alcácer, Mario Götze or Marco Reus, but the arrival of Erling Haaland midway through 2019/20 helped take his game to the next level. The Norwegian is brilliant at holding the ball up while the likes of Sancho and Thorgan Hazard sprint to join in, and he not only has the ability to play passes that can put his teammates in on goal, but also has the pace to catch play up again once he has played a pass.

Sancho and Haaland are both extremely quick and use their pace and clever movement to pull opponents out of the way for the other (above). They both like to get beyond the opposition defence and their midfield teammates know they can put balls in behind for them to chase. Equally, the threat of them making runs in behind pushes defenders into deeper positions and in turn creates space between the lines for Reus, Jude Bellingham or Giovanni Reyna to operate. Sancho is content to run in behind or come short looking for a pass to feet.

Dortmund are no longer the counter-attacking side they were under, say, Jürgen Klopp, but with Sancho and Haaland in tandem they are a significant threat on the break. At attacking transitions, both sprint in a straight line heading for goal to force their opponents to retreat at speed. They are exceptional at exploiting gaps in the opposition at transitions and as a pair are devastatingly effective on the counter.

With 38 goals and 45 assists in 104 Bundesliga appearances for Borussia Dortmund at such an early stage in his career, Sancho has already proved himself to be among the very best forwards in European football. Moreover, he has vindicated the risk he took by leaving Manchester City for Germany as a teenager, and he has inspired many others to follow his example by leaving England in search of first-team football. England have felt the benefits of Sancho’s trailblazing move, and United – City’s local rivals – will be the next club to reap the rewards of his decision.