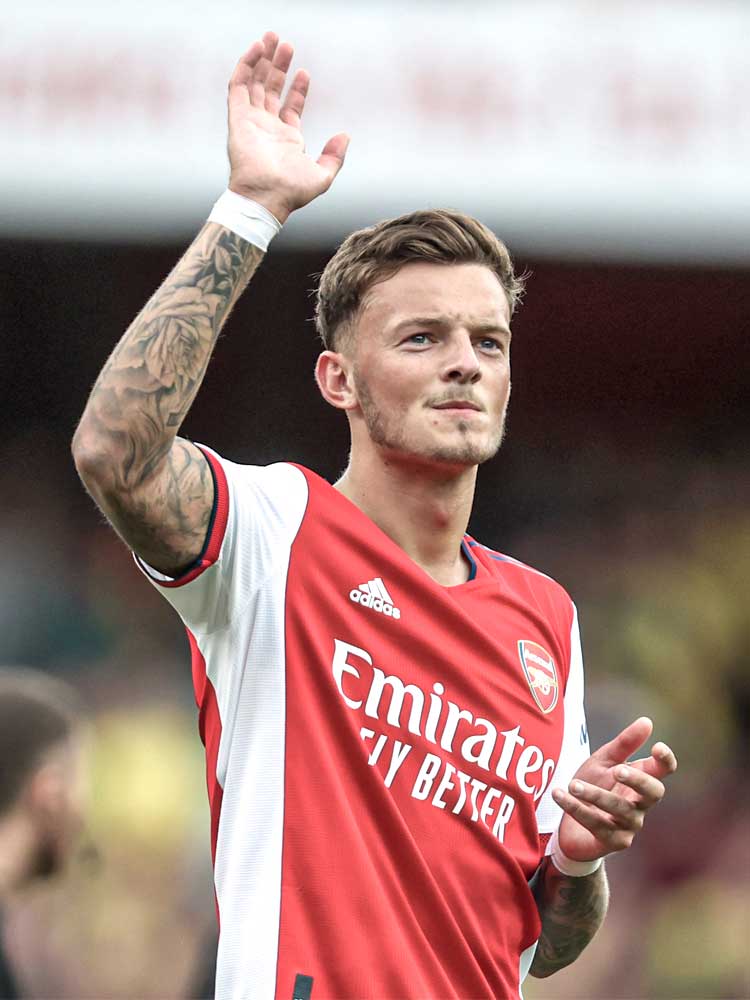 Profile
It was a lack of convincing defensive options that was widely considered to have undermined the last years of Arsène Wenger's reign as Arsenal manager as well as the entirety of that of Unai Emery. Gabriel Magalhães was one of the first major signings Mikel Arteta oversaw, and yet in the summer of 2021 his priority remained a new central defender, leading to Arsenal paying Brighton £50m for Ben White.

"Ben is an intelligent defender who is very comfortable with the ball at his feet and his style fits perfectly with us," said Arteta when the signing of White, then 23, was confirmed in July 2021. "His age and profile fits with what we are building here. We are all looking forward to Ben being central to our future long-term plans."

Tactical analysis
White is a right-footed defender whose versatility makes him capable of not only featuring anywhere in a back four, but also of deputising at the base of midfield. He, regardless, is most convincing as the right-sided central defender in a back three or four, where he can demonstrate his ability with the ball.

He defends with aggression when pressing from behind (below) and following opponents moving towards the ball. He is effective at preventing passes into the feet of those opponents, when he correctly times stepping ahead to intercept the ball, and at assertively defending one-on-one, even if there are times – mostly when he is further forwards – when his front-foot approach to defending means he concedes free-kicks.

He is proven at preventing opponents from turning, particularly when they have received with their backs to goal – a valuable asset in the defensive third. His mobility means he is also capable of advancing from his defensive line to follow an opponent, and of duelling with and pressing both powerful strikers and nimbler, agile forwards.

He complements those abilities by willingly blocking shots at goal, and by offering cover (below) if not the defender closest to the ball, when his recovery runs can stop opponents attempting to attack infield or diagonally across goal with the ball. It is when deployed as the first defender to compete for headers that he is less authoritative, and when his limited aerial abilities can lead to him becoming exposed.

He is instead at his best with the ball at his feet. He advances into midfield (below) by dribbling past opponents, disguising touches across his body to feint opening passing lanes to his right and then playing with his left foot and advancing into the space opponents have vacated. His passing range is also impressive. White plays direct passes, switches of play to the left, and penetrative, forward passes with accuracy. Driven passes with power, back spin and minimal backlift are also executed without sacrificing much of that accuracy, and often follow him playing off few touches to work possession away from pressure if play is not being built with short passes.

His off-the-ball movements can then contribute to attacks being built. He willingly advances into wider territory or, if selected as a defensive midfielder, drops off the shoulder of an opposing midfielder to play passes from different areas of the pitch.

Role at Arsenal
So far at Arsenal, White has featured as the right-sided central defender in a back four in which Gabriel is most commonly his central defensive partner, and Takehiro Tomiyasu is the full-back to his right. That their favoured shape is a 4-2-3-1 means the presence of a double pivot providing security from in front of White and Gabriel, regardless of whether Arsenal are with or without the ball; they most consistently defend with a 4-2-3-1 mid or low. block, or with a 4-4-2 (below).

Towards the right of their structure there exists significant defensive cover, balance, and support. White, Tomiyasu and Thomas Partey, their right-sided defensive midfielder, swiftly developed a sound understanding, and between them, even given Arsenal's relatively reserved approach to defending, make numerous interceptions and commit to duels.

The defender's role has also changed from his time at Brighton, where he was regularly one of three central defenders. The willingness of Bukayo Saka to make defensive contributions from his role as a wide forward has often meant White covering, and remaining braced to withdraw and protect the spaces that otherwise would exist in behind – particularly when his team is recovering into a withdrawn defensive block. It is in those circumstances that he also provides defensive support against direct play, when he can potentially be seen effectively protecting spaces around Gabriel.

The instinct with which he aggressively jumped forward during moments of transition has regardless been preserved, but even if he can be seen doing so less regularly than at his former club, he is likely to advance further forwards when he does. When Tomiyasu advances White has increased space to defend, which means him less regularly stepping ahead of his opponent to intercept passes and, with one fewer central defender alongside him and the second phase of pressure coming from Arsenal's double pivot, that it is more risky for him to do so – for all of his ability.

With the ball at his feet, White is less commonly dribbling into midfield than he was, largely because of the increased numbers that exist there in front of him. It is when Arsenal's central midfielders are being aggressively marked that they are likelier to drift from the centre of the pitch, in turn encouraging White to advance forwards and link into their overlapping full-backs or those in the final third.

He, similarly, is attempting fewer switches of play, but his ability to play longer-range passes remains a consistent feature of his attempts to build possession. Often targeting those towards the right (above), he executes accurate passes over or around the opposition's defence, which particularly complements the left-footed Saka and Nicolas Pépé – who adopt wide positions with the intention of running infield or in behind – and Tomiyasu's instincts to overlap.