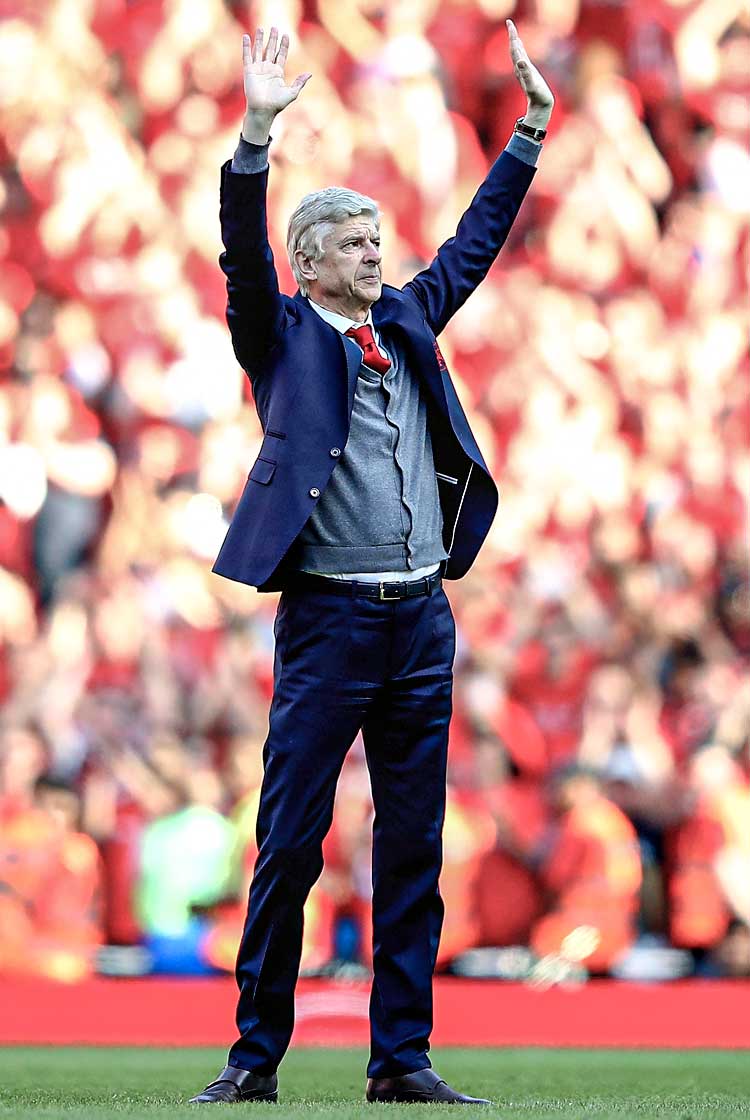 Arsène Wenger: In Others’ Words

The great visionary, Arsène Wenger, was responsible for building one of the greatest teams in the history of English football, in Arsenal's Invincibles of 2003/04. He also accounts for one half of one of the most compelling management rivalries the game has ever seen, with his Arsenal and Sir Alex Ferguson's Manchester United winning every league title between 1996 and 2004. Wenger's influence transformed Arsenal into one of Europe's leading clubs, and the rivalry with United helped develop the Premier League into the world's most popular league.

The Frenchman left Arsenal aged 68 in 2018, having won three Premier League titles and seven FA Cups, as well as taking them to the finals of both the UEFA Cup and the Champions League. Some of the players he had at Arsenal have since followed him into coaching, and in exclusive interviews with The Coaches' Voice, they have revisited what it was like to play for one of the game's most successful ever managers. His influence stretches so far that many of players or coaches who only ever came up against him also saw fit to pay him credit.

We have delved into our archive of interviews to bring together the best recollections, and they are listed below.

"'Arsène came in, and immediately I felt resentment. Pat Rice was doing a great job as caretaker manager, and we were fourth in the table, and going for the league. Then Arsène swanned into town against Borussia Monchengladbach in the UEFA Cup and demanded Pat took me out of the back three we’d been playing and use a back four. We lost, and then he left.

"In the dressing room afterwards, I said: 'Pat, what’s that about? I’ve got maybe one opportunity to win this cup and he’s just knocked us out.' I was absolutely livid.

"On his first day of work, I showed up ready for a massive fight, but you know Arsène. He’s so charming – he’s wonderful, and spiritual – and he didn’t like confrontation.

“'Tony, you’re very athletic. You’re very tall. You’re much bigger and stronger than I thought.' I’m an absolute sucker for anyone who’s nice to me.

"Biomechanically, physically, he got me into the best shape that I’ve ever been in. 'Tony, my advice is use your strengths.'

"I wasn’t fit, but I would have put a few more injections into an injury and kicked on. Arsène went: 'No. Go to the south of France. One week of rest, one week of rehab, and one week of training again. If you’re not going to be 100 per cent right, I don’t want you. Go and get right.' That was revolutionary."

"Arsenal was a team with fantastic players, a settled system and, in Arsène Wenger, they had a manager with a philosophy I was looking for. The way he thinks and looks at the game isn’t for everybody, but for me it was easy to connect with. It was easy for me to play his style of football.

"That way of thinking was already within me. That’s why we excelled as a team – because we were all on the same wavelength.

"Arsène’s approach with the back four was to focus on the block as a unit – he’d put in a system, but individually it was up to you. He wasn’t relying on you to be quite the finished product, but to be almost there.

"It’s a bit different now, but in those days you had to kind of figure things out."

Freddie Ljungberg played for Wenger at Arsenal from 1998 to 2007

"I met with Arsène Wenger. He was so convincing. We talked for a long time about how he saw football, how he wanted to play the game. Winning was important to him, but so was respect. Something just clicked in me; I had to sign. I don’t think we even talked about salary, it was just about football.

"Anyone who has been close to Arsène Wenger knows how much he likes to win. He is a gentleman, of course, but he would show if he wasn’t happy in his own way – and we would know it.

"Arsène was also someone I spoke to when I started to think about coaching,

"With Arsène, the players were allowed to be individuals – but he was strong on respect and had no time for arrogance. You always understood what he was doing, and you could see why he made the decisions he did."

"Sir Alex Ferguson respected Arsenal. He respected Wenger and he knew that it was the fine details that could perhaps get us the result.

"They could out-football anyone, and if they wanted to get aggressive or it was ever going to get a bit nasty, they could look after themselves, which was the same as us.

"They were huge battles. Together with the sideshow of the managers who looked like they didn't get on.

"I arrived at Crystal Palace in 2002, at what was probably the height of Arsène Wenger's influence on the English game. Clubs and players were still dealing with the changes at the time, but I have no doubt that that period made the Premier League the force it is now.

"Wenger not only made the game more athletic and altered players’ habits in England; he also brought in a style of play that made permanent advances in how the English game was played.

"The way his Arsenal team played was amazing – a game of speed, precision and movement. As I think about what excites me now as a coach, a lot of it is based on the movement and fluidity of that Arsenal team.

"I’d managed against Roberto Mancini, Roberto Martínez and of course Sir Alex, and then we had Arsenal and Arsène Wenger away. We started really well, but got beat 6-1.

"I’ve got pictures with all of those other managers of when we’ve gone to shake hands. They’ve all been brilliant with me."

"I wasn't the first French manager in England. Arsène Wenger and Gerard Houllier were already there, respectively at Arsenal and Liverpool, and I had a good relationship with both.

"When I arrived in London to sign my contract, Arsène called me and we went for dinner. There was no sense of competition, no pressure. On the contrary, he welcomed me, and we talked a lot about the managerial code in England. In each country, it is different.

"I still speak with Arsène now. Every year I try to meet up with him, spend a few days in his company.

"It's always a pleasure. We don't set the whole footballing world to rights, but we talk about things all the same."

"Arsène Wenger was brilliant with us that day. He was under real pressure at the time – getting a lot of criticism from every quarter. And yet he still gave us 90 minutes of his time to talk about football after the match. He had so much passion and love for the game – it really impressed me.

"We talked about selection headaches and training regimes. Even though we were polar opposites in terms of levels, it was really interesting that we faced similar problems and dilemmas.

"But the one moment that will live with me forever was when Arsène pulled these yoghurts out and put them on his desk. Me and Nicky sat forward in our chairs, preparing ourselves for some in-depth tactical insights. Then he just started drinking them.

"That was 90 minutes that will live with us forever."

"What Arsène did was totally unique. He transformed the mentality of English football, and to see that happen was incredible. I wanted to instil a mentality with the women’s team that fit with his ‘Arsenal way’.

"Our targets were focused on what we could do with the ball. We wanted to control the game when we had the ball, and be proactive when we were defending. That way we would feel in control then, too."

"My destination after two marvellous years at Mallorca was Real Madrid. Everything was ready for me to sign the contract, but right before I did my agent got a call from Arsène Wenger.

“'Come to London, we want to talk to you,' he told him. So we did. We met at David Dein’s house. That was the first of many days that I spent with Wenger, and I always felt, ever since that first moment, that the feeling he transmitted was of assurance, calm, and total confidence.

"You could tell he was not coming out with a load of hot air. Many times I have taken part in negotiations. I have always been present in all the contracts I have signed and you can perceive the feelings. You know if you’re being told something that later is not going to be delivered. Wenger made you feel secure that he would deliver what he was saying.

"He is a manager thar cares not only about the player, but about the person. He wanted feedback from his players, about what was happening on and off the pitch. For him it was very important also to know the emotional side of the group.

"In 2003/04, Wenger didn’t say anything about an invincible team. Nobody made any comments about it. Obviously, coaches know about their team's potential. Wenger and his staff knew what we were capable of, but nobody talked about it that season.

"We took it one game at a time, and we made it at the end. We won the Premier League unbeaten. No one had made it before, and to this day no one has managed to do it again."