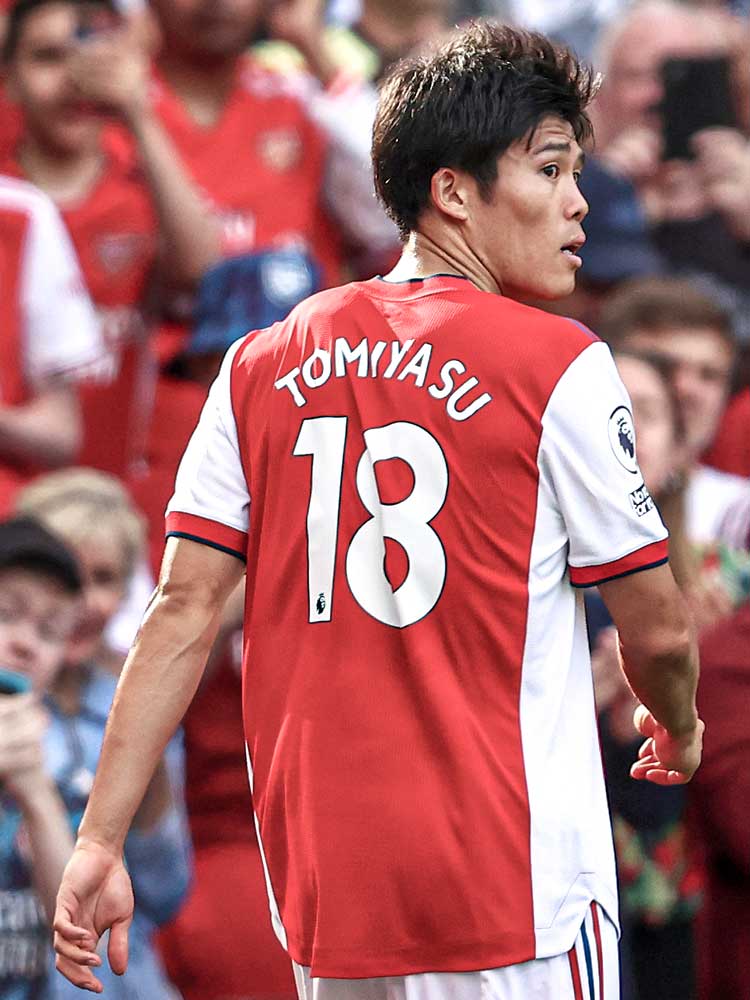 Profile
Joining Ben White, the £15.5m Takehiro Tomiyasu is one of two players Arsenal are relying on to transform what for so long has been an inconsistent defence. Unlike White, in the departed Héctor Bellerín, Tomiyasu is also being asked to replace one of Arsenal's most popular players.

Aged 22 when he arrived from Bologna in August 2021, Tomiyasu, a Japan international, also represents a continuation of the more recent transfer policy that has involved Arsenal again targeting younger players, as they also did for so long under Arsène Wenger. "Takehiro is a strong defender with good experience in Serie A and at international level,” said their manager Mikel Arteta, once a teammate of Bellerín. “He’s a versatile defender with great defensive qualities, high technical ability and composure on the ball."

Tactical analysis
Tomiyasu is a right-footed defender proven at both full-back and in central defence. If playing centrally he defends with greater aggression by stepping out more and attempting to step across of or in front of his direct opponent (below) and therefore make interceptions.

Though he also jumps out when in wider territory, he jockeys opponents more to force play along the touchline, slow the opposition's attacks, and secure time for his teammates to recover their defensive positions or make recovery runs back into their defensive block. Should he instead be more aggressive, his ability to accelerate and dribble forwards with the ball after making regains means that he can initiate counters.

Capable of competing at aerial duels, and of making interceptions and recovery challenges and commiting to further duels, Tomiyasu regardless records relatively few fouls. It is when his direct opponent hides and shields the ball that he can become frustrated; when possession is securely away from him and that opponent uses their back to absorb pressure, it is likelier Tomiyasu will commit a foul or be beaten one-on-one. Though willing to press to prevent opponents from turning and progressing possession, intelligent attackers can take advantage of his enthusiasm by drawing fouls, particularly if he has been selected at full-back (below) – and is potentially defending against a wide player who has retreated to receive.

A similar versatility extends to when Tomiyasu is the one with the ball at his feet. Confident and composed under pressure, he can break lines via his passing and dribbling ability. From a wider position he drives forwards with the ball, using an effective jink and disguised touch to move around his opponent.

It remains unlikely he will beat numerous opponents with repeated changes of direction, but he is efficient and direct and, from the right, drives forwards (below) to cross, which he can do from a variety of positions. Aerial deliveries from a slightly withdrawn position, and cut-backs from more advanced territory, represent his favoured nature of delivery. From a wider starting position, when space outside is limited, he has also been known to dribble back infield, and instead show his passing range with his left foot – potentially by executing more direct passes.

He, similarly, offers support by moving forwards off the ball to deliver crosses after making overlapping runs, or by moving infield towards those in central territory, in turn encouraging the wide player in front of him to receive while wide and make runs in behind. Should shorter passing options not exist for Tomiyasu, his ability to explode past opponents and into larger spaces can instead help him to resist an opponent's press; if instead playing longer or direct passes, he can use both feet to find advanced teammates or release them in behind, and consistently does so with accuracy.

Role at Bologna
Tomiyasu started 2020/21 in central defence, where he was most commonly paired with the experienced Danilo in a back four – mostly at the base of a 4-2-3-1. Selected as the left-sided central defender, Tomiyasu, like Danilo alongside him, regularly contested aerial deliveries and direct passes through the centre of the pitch; they recorded Bologna's highest number of aerial duels across the course of the season.

Tomiyasu's pressing out of defence and movements to intercept (below) were supported by Danilo, who provided cover – particularly against passes along the ground. Through both the centre and left inside channel, Tomiyasu was particularly aggressive in applying that individual press, contributing to those beside him in defence adopting more central positions to remain compact if one of Bologna's defensive midfielders didn't withdraw into defence to cover him – something that proved more common when they were adopting a deeper block and defending from inside their defensive half.

If an attack was instead unfolding on the opposite side of the pitch, Tomiyasu instead became responsible for covering from behind Danilo, and moved to his right to do so if further cover wasn't provided by those in midfield. Switches of play from the left inside channel from his favoured foot proved as effective at finding teammates as direct, vertical passes played off of his left and into those already in central territory or also drifting into the left inside channel; clipped passes to between the lines, instead of in behind, also succeeded.

It was later in the season that Tomiyasu was instead used at full-back – mostly towards the right (below) – where his ability to defend as an individual helped to force play wide, and was supported by those featuring in Bologna's double pivot moving across to cover when they were defending with a deeper block. In turn, during moments of transition, his ability to delay opponents and force possession wide provided time for their defensive midfielders to assume their desired position, and potentially prevented play being switched to the far side of the pitch and behind their retreating left-back; if a regain was made, Tomiyasu readily countered forwards, often doing so by moving infield to combine with those in the final third.

From full-back, Tomiyasu received possession and advanced significantly further than when positioned in central defence. His wider position and ability to drive forwards represented an important outlet in Bologna's attempts to progress possession around their opponents' attacking lines, to where he then supported their right-sided wide forward, who regularly moved into the inside channels. When Bologna's central attacker and number 10 advanced further forwards, increased spaces existed for off-the-ball movements that included Tomiyasu's overlapping runs.

There, regardless, remained occasions when he would attack while further infield, instead of by providing overlaps. With Bologna's striker and 10 advanced, Tomiyasu capitalised by operating ahead of their double pivot, drawing opposing defenders towards him to create space for his teammates in the right inside channel or in wider territory, and then complementing doing so by disguising passes and using his left foot to take him through or around the opposition's midfield.