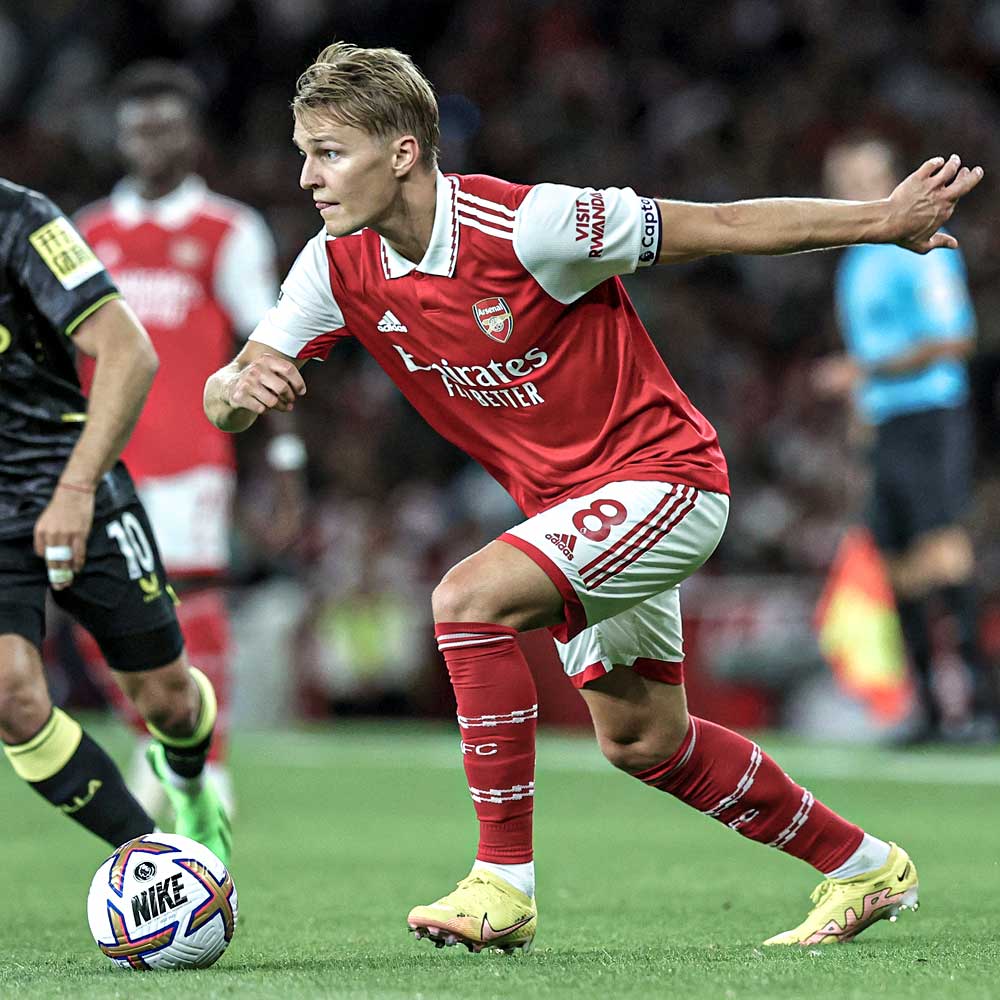 Profile
Norway's Martin Ødegaard was only 16 when, in January 2015, he joined then-European champions Real Madrid from Stromgodset for a reported fee of £2.3m. Drawing comparisons with Lionel Messi even at that age, he was still taking a huge risk in moving to the Santiago Bernabéu; many others before him had been tipped for greatness at Real but struggled to realise their potential.

By the time of Ødegaard’s move to Real, he had become the youngest player to appear and score in the Norwegian Premier League, but his upwards trajectory tailed off. Following temporary moves to the Eredivisie and Real Sociedad, he moved to Arsenal – first on loan and then permanently for a fee of £30m in August 2021 – and it is there that he is rebuilding his career. “He always wants the ball and he commands our pressing,” said their manager Mikel Arteta. “He's really influential.”

Tactical analysis
The most impressive aspect of Ødegaard’s game is how forward-thinking he is when in possession. He takes every possible opportunity to attempt to progress play by breaking lines with incisive passing, and so he regularly cuts opponents out of the game (below). He also regularly gives the teammate receiving his pass a ball that they will have a good chance of controlling and using positively.

Similarly obvious is his intelligence, and in particular his understanding of how to access his teammates in more advanced positions. He disguises and times the release of his passes so well that his teammates will adopt dangerous positions between the lines or look to run in behind, secure in the knowledge that Ødegaard has the ability to find them.

His constant movement across the attacking third maintains both the intensity of his game and the momentum of his team’s attacks. He always follows a pass with a movement to receive again or to take an opponent away from the ball. He recognises when to withdraw after a pass – in preparation for it to be laid back to him – and when to continue running forwards in the hope of receiving a return pass beyond his direct opponent (below).

If forward passes aren’t available, he is content to remain in possession and to attempt to advance through tight spaces through his dribbling. Even though he is not particularly fast, his balance, agility, low centre of gravity and excellent close control mean he is able to evade pressure consistently. His technique in jinking past challenges is the main reason he was compared to Messi at an early age.

He is slightly too left-footed in all that he does, and that restricts him somewhat in his dribbling, when his body shape often indicates an intention to move on to his left foot when there is more space to his right (below). Were he also to dribble to his right more confidently he would be far less predictable.

That proves particularly problematic when he is already on the left. He doesn’t have the pace to take an opponent on around the outside, and getting into a position to cross from the left isn’t part of his game. He is also not very effective at moving into the left half-space from the touchline, where an ability to pass with his right would be beneficial. That can mean he will too readily look back for a supporting teammate to recycle possession through, allowing the opposition to reset when a progressive pass or dribble would have been best.

For the majority of his Arsenal career, Ødegaard played as the number 10 in Arteta’s 4-2-3-1 shape. The double pivot regularly drop to support the back line, with Ødegaard operating higher, and only dropping short to bounce the play into the wide areas, usually to the advancing full-backs.

As Arsenal have evolved under Arteta and have used a 4-3-3 shape, Ødegaard has moved towards the right as a number 8 in a fluid midfield three. Granit Xhaka, initially part of the double pivot, moves up and across to occupy the left inside channel, with Thomas Partey or Albert Sambi Lokonga as the single pivot (below). From here, Ødegaard looks to connect with Bukayo Saka on the right wing, but will also drop deeper much more often than when used as the single number 10.

Ødegaard will also combine with Arteta’s full-backs, who come inside more than previously, with Ben White and Takehiro Tomiyasu versatile enough on the ball to drive inside from right-back. They can either move inwards to join Ødegaard in central midfield or rotate with him as he drops out wide. From this particular position on the right side of a three, Ødegaard has consistently demonstrated his ability to break lines, particularly with first-time passes, but also help his team play through an opposition press, helping switch the play to the left centre-back or the inverting left-back Oleksandr Zinchenko or Kieran Tierney.

When higher up the pitch, Ødegaard consistently looks to receive between the lines, using his half-turned body shape to play forward as often as possible after receiving. When a wide forward makes a diagonal run in behind, Ødegaard is adept at sliding a through balls in behind from a central position. When he played behind Alexandre Lacazette, the dropping centre-forward gave Ødegaard a close passing option in the central areas, but Lacazette closed Ødegaard's space down and also meant Arsenal did not have enough of a threat beyond the opposition’s defence.

Since Gabriel Jesus’ arrival, however, Arsenal have had impressive and consistent movements to disrupt the opposition’s centre-backs. This has given Ødegaard more space to receive between the lines, and this, coupled with penetrative movements from Saka on the right and Gabriel Martinelli on the left side, has given Arsenal more threat and variety in the final third.

Ødegaard will occupy the right inside channel more, trying to create overloads on that side of the pitch (above). Arsenal’s central midfield adapts with Xhaka pushing forward, and the other pivot player readjusting. With left-back Zinchenko also moving into central midfield, by overloading the right side, Arsenal also create more space on the left for Martinelli to attack his direct opponent 1v1. Ødegaard is perfect for this role, able to combine in tight spaces and change the pace of Arsenal’s play, before looking to find the more dangerous attackers. He has rekindled his career under Arteta, and now looks to be fulfilling the vast potential he showed at such a young age in Norway.