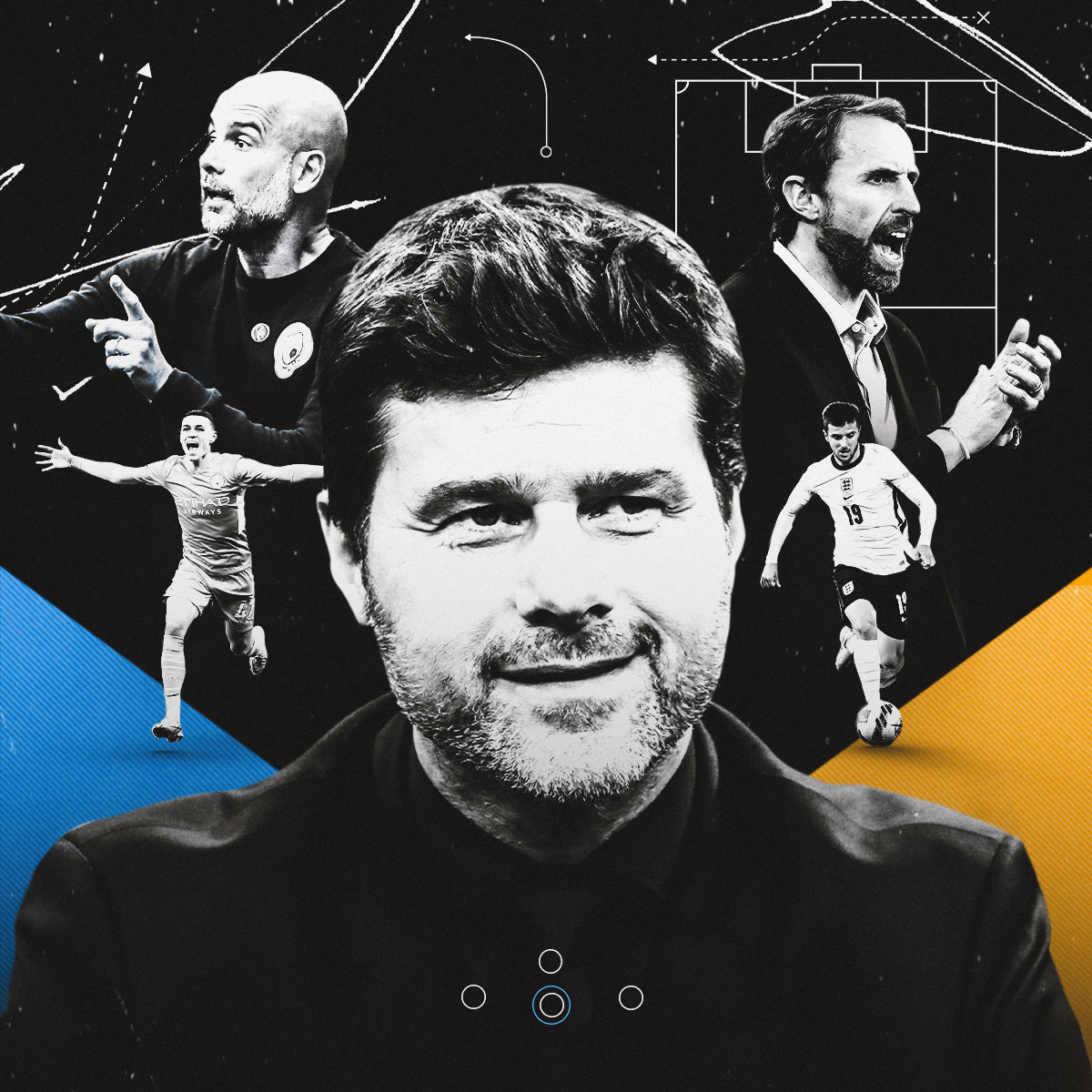 The 4-2-3-1 formation operates with four lines. In defence, there is a back four consisting of two central defenders and two full-backs. Two deeper central midfielders operate ahead of the back line and are often referred to as a double pivot. Further forward, an attacking midfield three play behind a lone centre-forward.

With many teams using a withdrawn centre-forward in a 4-4-2 in the late 1990s, the 4-2-3-1 was eventually introduced in the 2000s to prevent access into central spaces between the lines. This initially stemmed from having a single pivot covering these spaces – Claude Makélélé was the most notable of these – before a second defensive midfielder was added ahead of the back line.

This formation became more popular as pressing became a bigger part of the modern game. The double pivot covers the space in front of the back four but also supports the press behind the centre-forward and attacking midfield three. Manchester City assistant manager Juanma Lillo is thought to have instigated the change from 4-4-2 to 4-2-3-1 in Spanish football, with the high press a significant contributing factor.

What are the in-possession responsibilities of players in a 4-2-3-1?

The single centre-forward is supported by the number 10 to provide the team’s main central attacking threat. It's also common for the wide attacking midfielders to cut inside, often playing on their unnatural flank – as ‘wrong-footed’ players – to provide a more direct threat on goal. The nine and and 10 will also rotate and swap positions to drag defenders out of shape and create space in central areas for the wide players to run in behind.

The two players in the double pivot support underneath the ball, and are free to drift wide to help the team switch play. During transitions, one of the double pivot can push forward to provide extra threat on the counter-attack. For the most part, though, they remain central and connected to the centre-backs. These two players provide the link between the back four and the attacking unit of four.

With many wide midfielders working infield, the full-backs can overlap to provide width in the attack (above). From here, they can deliver crosses and cut-backs from out wide, and provide an option for a switch of play. The double pivot gives security behind the ball, allowing both full-backs to push forward simultaneously.

The centre-backs will bring the ball out of defence, passing into midfield or playing direct balls into the attackers. They will rarely dribble into midfield, as there is already a double pivot ahead of them.

What are the out-of-possession responsibilities of the players in a 4-2-3-1?

The back line of four will defend as a compact unit. The full-backs tuck in, and will defend against wide players in one-on-one situations. The central defenders will mark the opposition’s strikers. The double pivot provides protection ahead of the centre-backs, covering the spaces between the lines.

The double pivot also supports behind a higher press, working from side to side to cover the gaps between the three attacking midfielders. One may jump forward to press alongside the number 10 or a wide midfielder, as well as moving across to support a full-back.

The attacking midfield three and centre-forward will narrow, screening the central spaces when in a mid or low block. The centre-forward will often instigate a high press, with the number 10 pushing forward to press alongside them as a flat two, or covering beneath and marking the opposition’s pivot. An in-possession 4-2-3-1 can therefore become an out-of-possession 4-4-2 or 4-4-1-1. In any of these shapes, the far-side wide midfielder will move narrow to add a body in the centre of the pitch. This can be in a mid-block, low block or when pressing high.

In Pochettino’s 4-2-3-1, Harry Kane was supported by Dele Alli as a penetrative number 10 who often ran beyond the centre-forward. Son Heung-min also provided penetrative movements, but did so more often following transitions. Christian Eriksen played as a central number 10 or sometimes as one of the wide attacking midfielders, although he would move central to help the double pivot break through the opposition midfield. Kyle Walker and Danny Rose provided attacking threat from the full-back positions, overlapping to give the team width in attack (below). Meanwhile, a versatile double pivot of Eric Dier and Mousa Dembélé provided protection in front of the two centre-backs, Toby Alderweireld and Jan Vertonghen.

Flick’s 4-2-3-1 (below) was particularly effective in Bayern's successful 2019/20 Champions League campaign. They beat Chelsea 7-1 on aggregate and Barcelona 8-2, having also won 7-2 at Tottenham in the group stage. Centre-forward Robert Lewandowski had support from the mobile Thomas Müller, who ran beyond the striker, provided extra presence in the box to attack crosses, and rotated with wide players Kingsley Coman, Ivan Perisic and Serge Gnabry, who moved infield towards goal. Thiago controlled the tempo of the team’s passing from his position between the back four and attacking midfield. He was paired either with Leon Goretzka, who provided penetrative runs around Müller, or Joshua Kimmich, who added a stronger defensive presence in the double pivot. This allowed both full-backs, Benjamin Pavard and Alphonso Davies, to attack simultaneously.

In the 2020/21 season, Guardiola used a 4-2-3-1 more often than in any of his prior seasons at Manchester City. A double pivot of Rodri and either Ilkay Gündogan or Fernandinho covered the space ahead of the back four (below). The back line often converted into a three, as João Cancelo moved forward from left-back. City often attacked without a traditional centre-forward; if Guardiola went without Gabriel Jesus or Sergio Agüero, he would instead use a midfielder or winger – Raheem Sterling, Riyad Mahrez, Phil Foden, Bernardo Silva or Ferran Torres – as a false nine. Central rotations allowed Gündogan to push forward from the double pivot – often with Cancelo joining Rodri in midfield to maintain a two. Gündogan then made penetrative runs through the inside channels in the space created by the high and wide wingers.

Southgate has almost always favoured a double pivot with England. He has used a 4-2-3-1 both at Euro 2020 (below) and during the 2022 World Cup qualifiers. Kalvin Phillips and Declan Rice made up the double pivot whenever they were available. Both demonstrated exceptional ability to link the back line to the attacking midfield three and centre-forward Harry Kane, who often dropped into midfield. England’s attacking midfield three rotate constantly, making penetrative runs in behind as well as dropping into similar positions to Kane. Mason Mount, Jack Grealish, Jadon Sancho and Phil Foden all offer impressive ability to combine in tight spaces. Marcus Rashford and Raheem Sterling make more penetrative runs beyond the opposition back line.

The 4-2-3-1 provides a central midfield three that can overload a midfield two. The number 10 provides a presence between the lines, and can receive in space when up against a flat midfield.

The double pivot provides a solid midfield base, allowing wide rotations and cover if one or both full-backs push forward. They also protect the central spaces when defending, and give an added later of security at defensive transitions.

The 4-2-3-1 provides a good, staggered defensive presence when in a mid or low block, making it harder to penetrate through, especially in central areas. A 4-2-3-1 shape also provides lots of different passing lines and angles to play out from the back. The formation lends itself to triangles, making it conducive to a possession-based game.

The single centre-forward can be isolated. They are always underloaded against opposing centre-backs, and the use of a double pivot means it can take longer for others to push forward and support attacks.

The wide areas can be vulnerable to switches of play during counter-attacks if both full-backs have pushed forward. One of the double pivot can cover underneath an advanced full-back on one side; as they move across and the other member of the double pivot is left alone, however, a switch of play can bypass both of them.