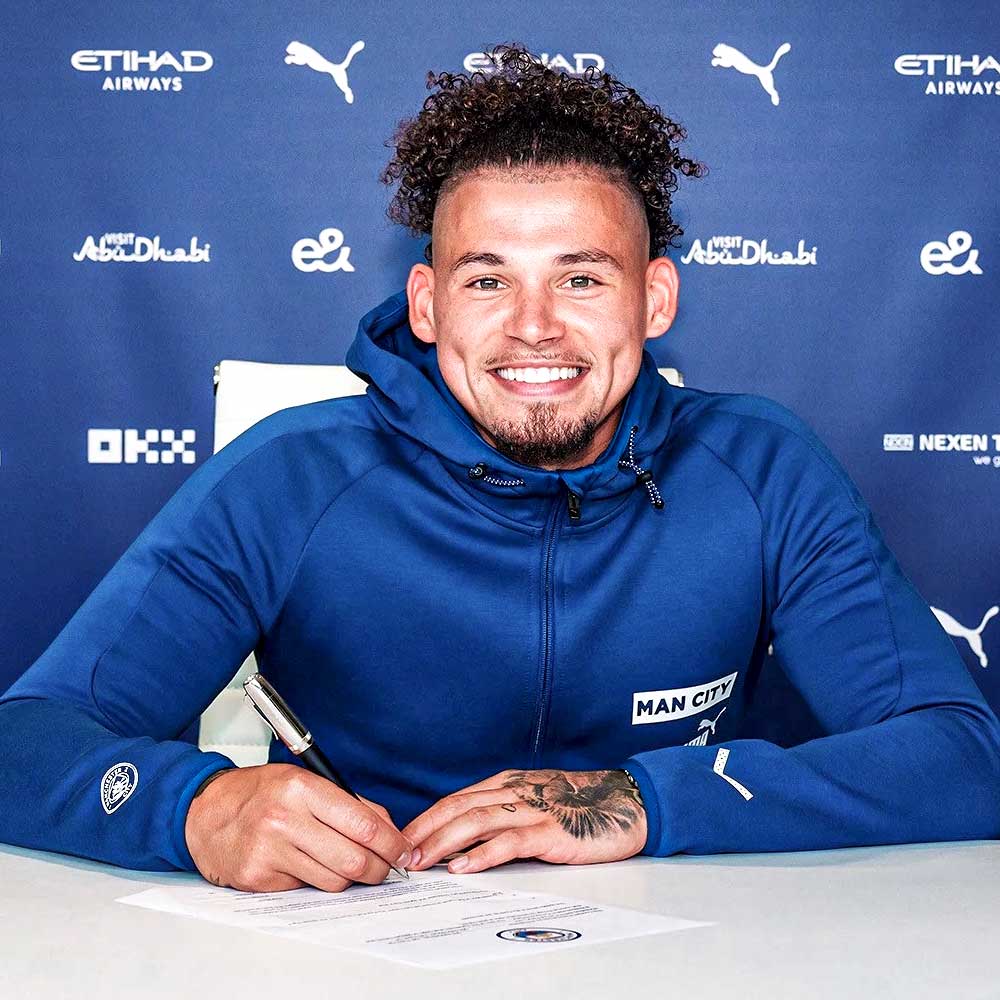 Kalvin Phillips has had a remarkable rise since his 2015 debut for boyhood club Leeds, and the latest development in this young midfielder's impressive career is a £42m move to champions Manchester City.

He first caught the eye in midfield in Leeds' promotion season under Marcelo Bielsa – so much so, in fact, that he became only the third player this century to represent England before having made a single appearance in the Premier League. Phillips started for Gareth Southgate's team in a Nations League fixture against Denmark in September 2020, four days before anchoring the Leeds midfield in a thrilling 4-3 defeat against Liverpool on the team's long-awaited return to the Premier League.

Phillips, a Leeds youth product who went on to make more than 200 appearances for the club, has since gone on to even bigger and better things. He had a stellar 2020/21 season for both club and country, in which he was a key figure in Leeds finishing ninth in the Premier League and then starred for England in the national team's run to the final of the delayed Euro 2020. His absence through injury for much of the 2021/22 season played no little part in Leeds' struggles in their second season back in the top flight, and the ultimate departure of Bielsa. Injury has, however, not put Pep Guardiola off bringing Phillips to the Etihad stadium.

“I am absolutely delighted to have joined Manchester City,” said Phillips after completing his move. “City have again proved to the best team in the country with an amazing squad and a manager in Pep Guardiola who is rightly considered to be the finest in the world. To be able to play under Pep and learn from him and his coaching staff as well as be part of a such a fantastic squad is a prospect that I am incredibly excited about.

Phillips is a defensive midfielder with a superb passing range and great tactical awareness. Most often used as a single pivot at the base of a midfield, he withdraws into deeper positions to assist the team in building possession in the defensive third. A player with impressive stamina, he is also capable of offering consistent movements across the pitch to create forward passing options and avoid being screened.

His availability to receive contributes to his passing range, while his technique means he is capable of playing off few touches. As a result, he can combine and build while receiving the ball or under intense pressure. He can also break lines in central areas, accurately finding teammates making forward runs ahead of him (below). The speed with which he executes passes is a further strength, while his timing has improved since his arrival in the Premier League at the age of 24.

From his starting position in the middle of midfield, Phillips can manage the tempo of his team's possession. He looks to draw defenders to one side, before using his awareness of both space and his teammates' positions to change his body shape and switch play.

If he can improve his longer-range passing, so that his accuracy when playing over defences into a teammate on the move matches that when playing into feet or switching play, he can be even more influential. As is often the case for deeper-lying midfielders, it is in the attacking half where he is likelier to lose possession.

Phillips' understanding of movement, positioning and spaces makes him effective at stopping opposition counter-attacks, particularly in central areas. He often recovers possession by intelligently predicting where loose balls will arrive and making interceptions (below), and by anticipating his opponents' movements.

A combative player, Phillips is also impressive when duelling for possession – something he developed further during occasional spells operating in the middle of a back three. He stands only 5ft 10ins, but his reading of the game and athleticism mean he is also useful in the air. When possible, he looks to control aerial balls on his chest and use his qualities as a ball-player rather than head it elsewhere.

Phillips most consistently featured at the base of midfield in the 4-3-3 that Bielsa preferred during his tenure. He links the defence and attack, where the team's attacking central midfielders advance to join their front three. As a result, he often has both time and space in which to operate and vary his movements to receive. Opponents are aware of his importance and often attempt to negate his influence by man-marking him. When they do, he draws them away from the ball so another teammate can move into his position and assist the build-up (below).

When he is under less pressure, Phillips looks to assist with wider combinations. Here, he receives from the full-backs before playing first-time passes through the inside channels. Fluid movements ahead of the ball, from either the attacking midfielders or wide forwards, give him options when doing so. The width of their full-backs also gives Phillips the opportunity to withdraw into or alongside the central defenders to receive the ball.

Bielsa's favoured wider combinations tempted pressure from opposing attacking players. In this situation, Phillips looked to take up positions from where he could support the ball without sacrificing his ability to receive. Should that pressure increase, Phillips' ability to combine in tight spaces helped the team progress from their defensive half. His one-twos and third-man runs around the Leeds full-backs also proved valuable here.

When Bielsa instead used a 3-3-1-3 shape, Phillips featured either as their most withdrawn midfielder or as the central defender in their back three (below). From there, he excelled in breaking lines from deep positions to find his attacking teammates. If opponents changed their pressing strategy to adjust to that, Phillips' versatility meant his play from central defence instead focused on initiating the wider combinations mentioned above.

Off the ball, his aerial ability is more intensely tested when playing in the back three. Here, he prioritises covering his midfield and delaying attacks over committing to challenges against fast or strong forwards.

It is when he played as the defensive midfielder in the 4-3-3 that Phillips is so important to preventing the counter-attacks so many opponents look for because of Leeds' commitment to attack. Phillips covers the three central lanes particularly well, increasing his fellow midfielders' freedom to contribute to the expansive movements Bielsa demanded in the attacking half.

Phillips was a vital part of the Leeds team since his ascension to the first team back in 2015. His qualities and his form, both at club and international level, have meant he has now outgrown his boyhood club.