Profile
The emergence of Emile Smith Rowe has not only made him a central figure in reviving Arsenal’s 2020/21, it has perhaps made him one of the most exciting new additions to the Premier League and, more significantly, alongside Bukayo Saka given Mikel Arteta’s team a new identity. Not since Jack Wilshere’s mature performances throughout 2010/11 has one of the club’s youth products made so dramatic an impact, and to the extent expectations surrounding his abilities are likely to soon be similarly high.

Discussing Saka and Smith Rowe, Arsenal’s manager, once a teammate of Wilshere’s, said: “When we are winning they put a smile on my face. I know what they are capable of doing; they are developing really well. The performances they are putting in are extraordinary.”

Tactical analysis
Smith Rowe is an extremely energetic attacking midfielder who excels in running from box to box and supporting his teammates – particularly those setting possession or playing backwards passes. His often vertical, well-timed movements and runs regularly support from behind play – making him a suitable target for the ball carrier – and involve changes of speed or direction that make him so penetrative.

Where there are numerous number 10s who favour creating between the lines and operating as the passing link between units, Smith Rowe is a willing runner who penetrates via his runs as well as his passing. Positive first touches are taken with the intent of moving towards goal, and into space – potentially drawing an opponent to follow him – from where he then correctly times his passes to encourage others to continue to attack.

On the occasions he is the one receiving between the lines, he superbly scans – both quickly and often, before and while playing the ball – even if he too regularly does so with his back to goal. If under reduced pressure he is capable of quickly turning (below) and potentially releasing possession with his second touch, and because of his positional sense and awareness, he is equally capable of drawing an opponent out of position to enhance his team’s attacking options.

During moments of transition Smith Rowe demonstrates the same creativity and potential whether attacking on the break or through a set-block. If he can continue to improve his positioning so that his attempts to turn when receiving the ball or so his first touches aren’t closed down by an opponent – particularly when receiving vertical passes – he can take possession with a more open stance and better protect the ball. 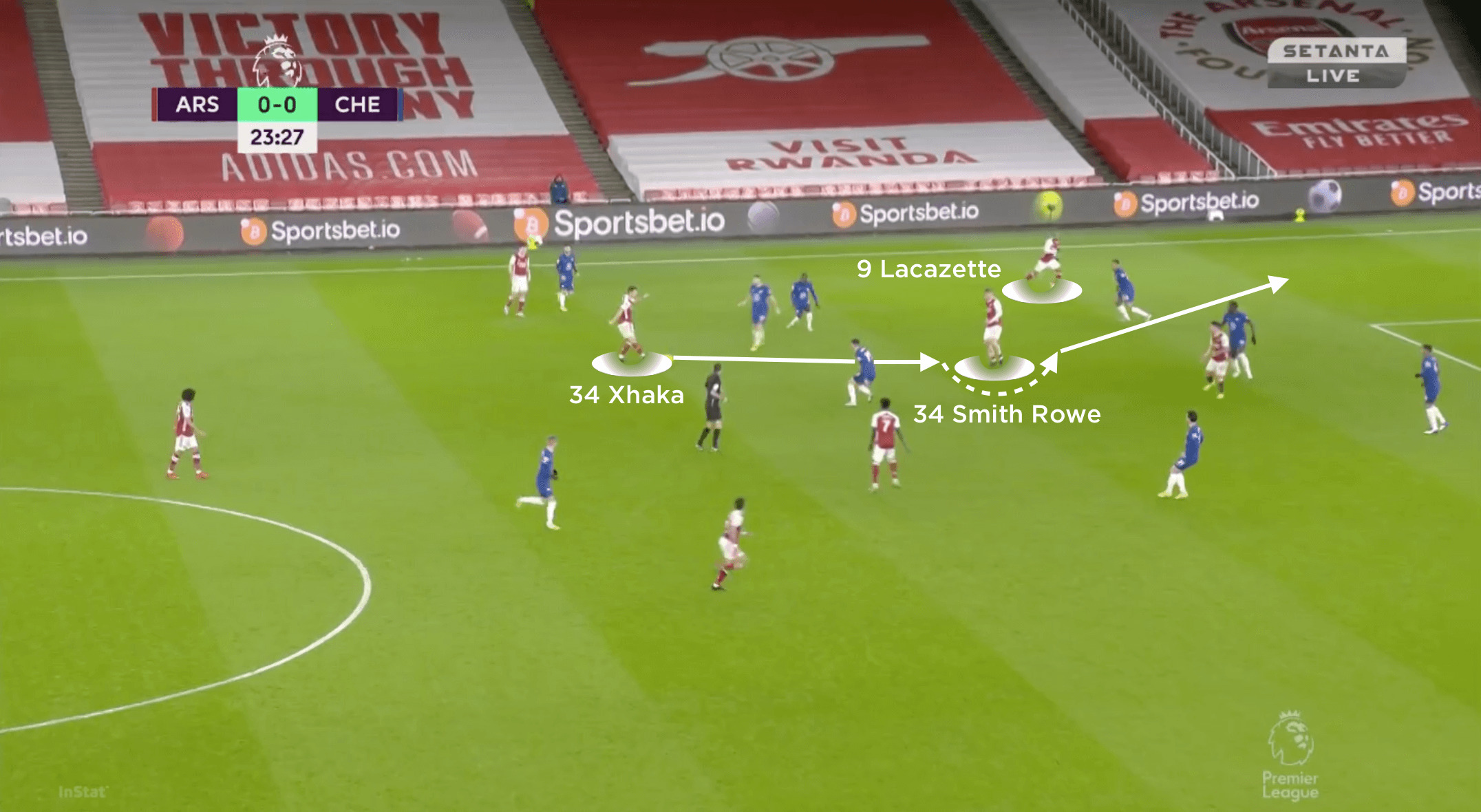 Unlike Mesut Özil, his predecessor as Arsenal’s senior number 10, and compared to other more nimble players, Smith Rowe’s dribbling technique often relies on bigger touches, ensuring that if his options are limited he can be tempted into attempting dribbles when he and his teammates are underloaded, and therefore risk conceding possession. In those circumstances he also becomes over-reliant on his right foot; if pressure is coming across his body, when he should be using his left foot he can be guilty of unrealistically attempting to use his right and playing the ball with his right back across pressure before recovering it behind his opponent.

He regardless demonstrates greater versatility with his body shape when the target of crosses, cut-backs or combinations in limited spaces, or indeed when in the path of deflections or loose balls. He favours releasing possession towards the edge of the penalty area, but once inside it he impressively adapts, with composure, to what is unfolding without overcommitting and shooting with excessive power if he has resisted playing it elsewhere. 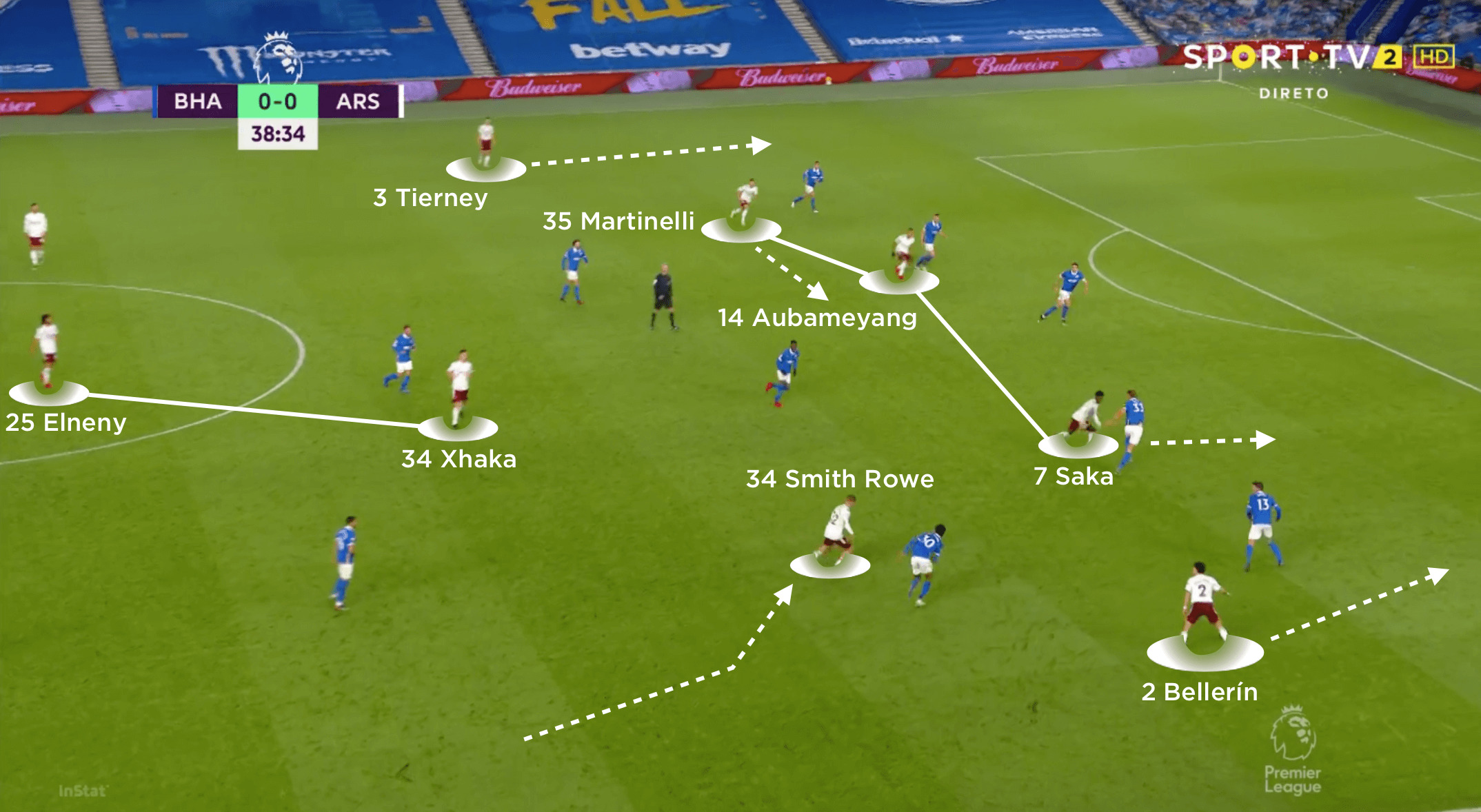 Role at Arsenal
Since featuring regularly under Arteta, Smith Rowe has been selected as the number 10 in Arsenal’s 4-2-3-1 (above) or one of two in a 3-4-2-1. As their lone number 10 he has proven particularly effective at linking with their forward runners – he has a particularly good understanding with Saka who, like Pierre-Emerick Aubameyang from the left, offers pace in behind and often increases the height and width of Arsenal’s attacks – and receives from a position that presents him with both options and freedom.

His preference to drive forwards upon receiving the ball is complemented by Arsenal’s wide players so regularly occupying their opposing full-backs, and their central striker drifting across to towards the central defender closest to Smith Rowe, encouraging him to turn and advance. By attacking through the inside channels he is also less likely to receive while not facing goal, and inside of their wide attackers, increasing their potential in those areas of the pitch and therefore increasing the number of crosses or cut-backs delivered. 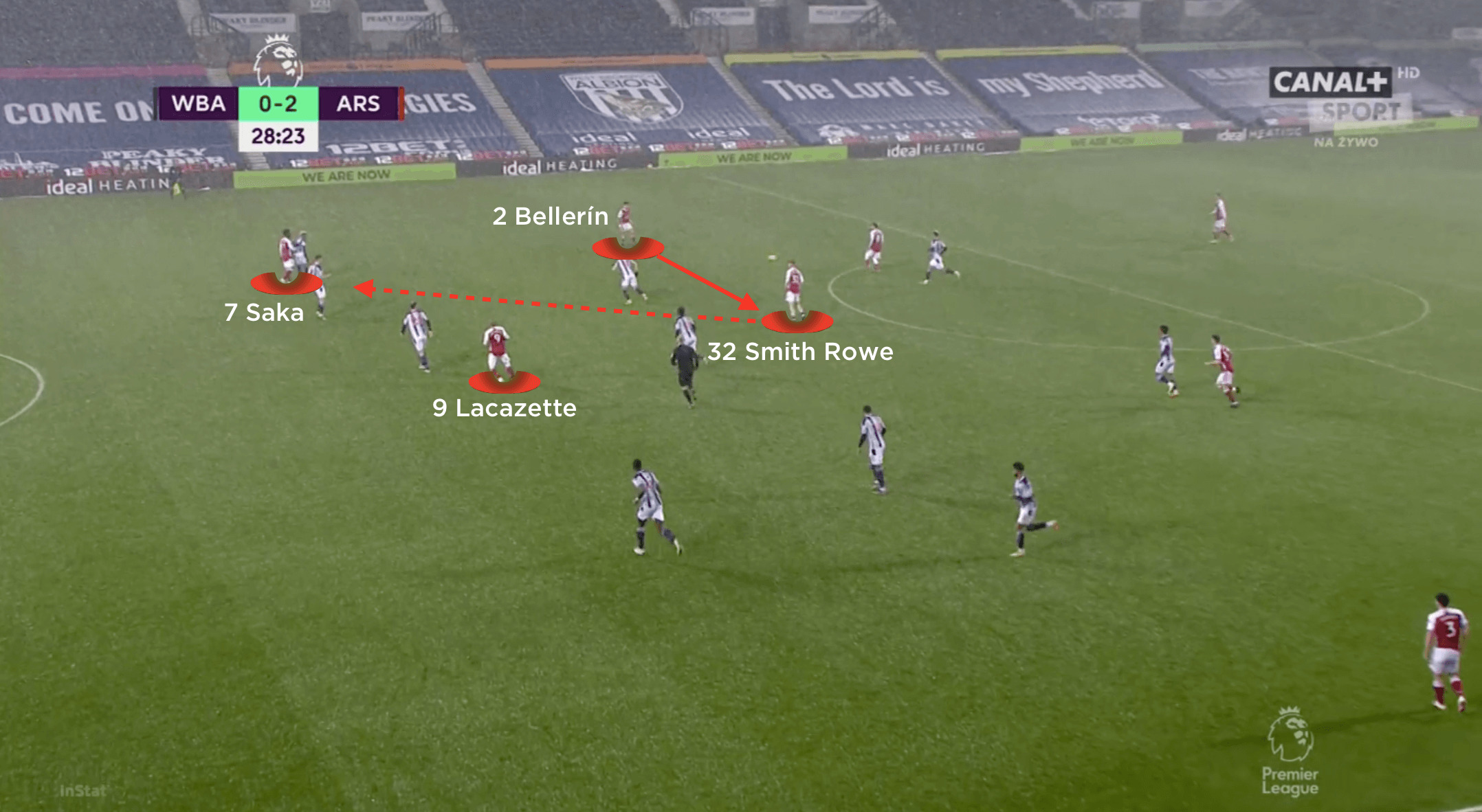 When teammates remain in line with or ahead of him, Smith Rowe’s positive touches and drives forward also lead to him sliding those teammates in behind before rejoining the same attack. Their full-backs Kieran Tierney and Hector Bellerín also often represent suitable options when they advance ahead of the double pivot that so often features at the base of Arsenal’s midfield. If he is instead one of two 10s, his freedom is reduced and he instead operates more towards one side of the pitch and without wide targets to follow and fewer spaces to pursue, ensuring he instead increasingly carries the ball, or delays his actions while their wing-backs reach or overlap him. During moments of transition in that system his potential seems particularly undermined.

It is against deeper defensive blocks that he is considerably more suited to their 3-4-2-1, largely because of the increased options and more immediate support that leads to. He regardless remains in a wider position, when he is instead more effective centrally (above), and less influential while waiting for support from their wing-backs that would already exist if he was their lone 10 between two wide forwards. 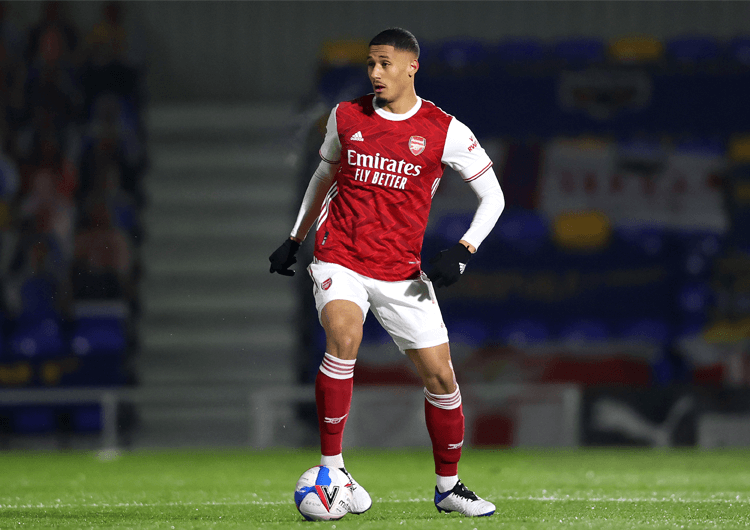 William Saliba has left Arsenal to join Nice on loan in a return to Ligue 1. We assess why the young French defender is so promising 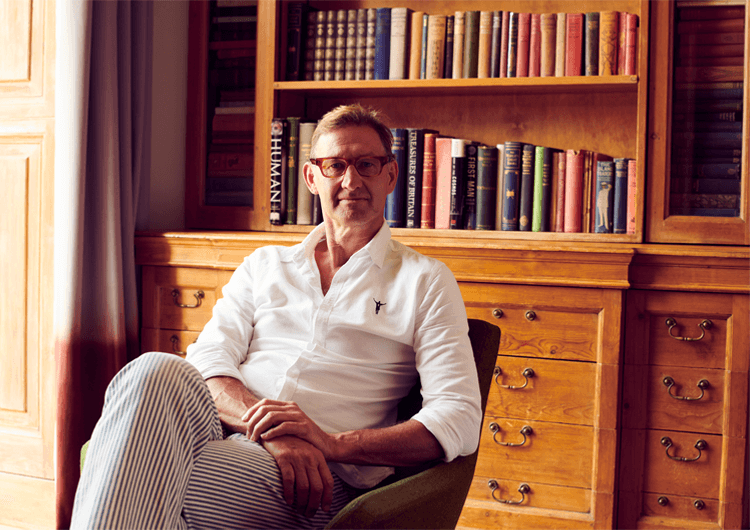 It was in 1996 that Arsène Wenger arrived at Arsenal. Tony Adams revisits a professional rivalry with Manchester United, and a special time in his own life 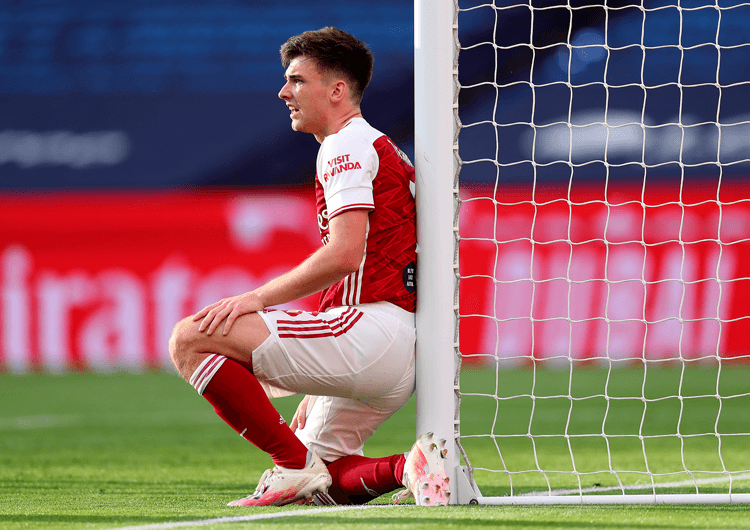 Arsenal spent £25m recruiting Kieran Tierney from Celtic. Our professional coaches assess what can be expected of him in their improving defence