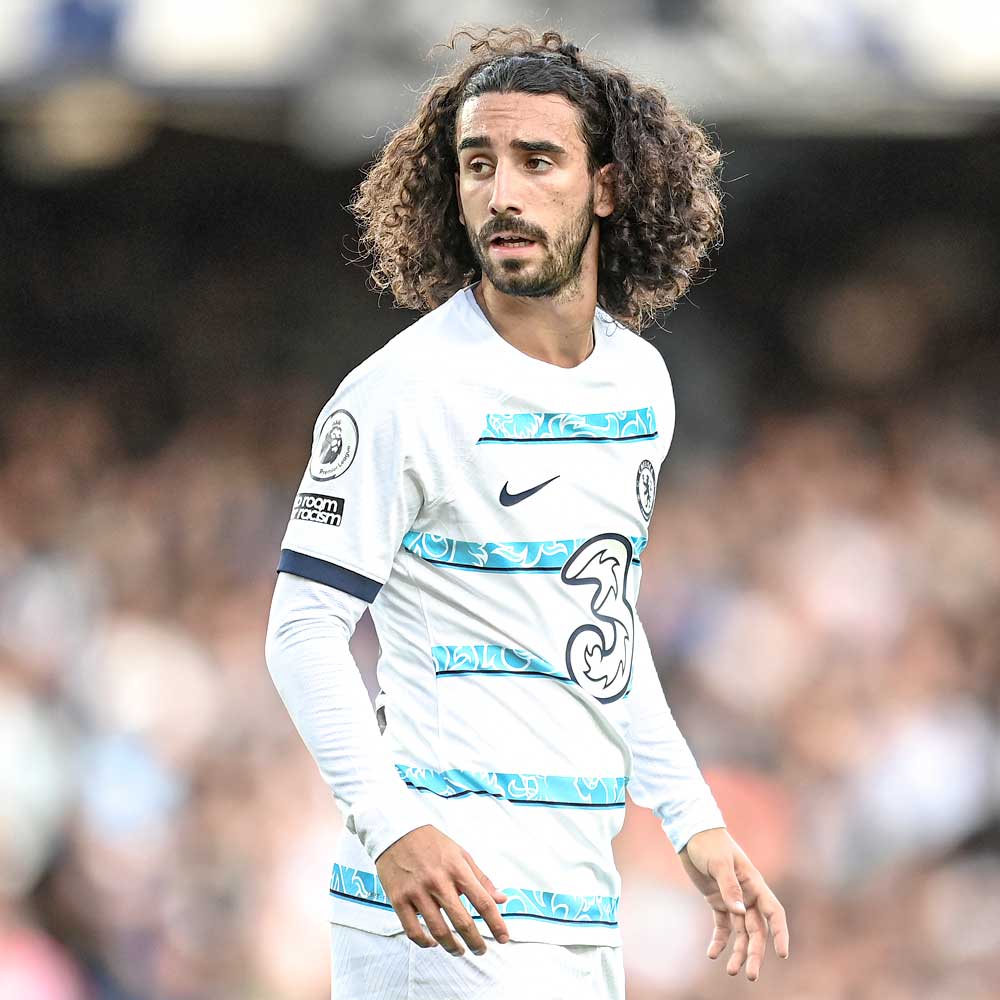 With six of his formative years spent learning his trade in Barcelona's youth team, Marc Cucurella has had a career so far that suggests big things could be expected of him. It should come as little surprise, then, that for much of the summer of 2022 – which came after his one season at Brighton – some of the Premier League's biggest clubs have been chasing his signature. In the end, Chelsea won the race to sign him, after Manchester City reportedly failed to agree a fee with the south-coast club.

It took a fee that could reach £63m for Brighton to agree to sell a player who appeared in a variety of positions and quickly became something of a fans' favourite. In the end, though, Graham Potter's side could not keep hold of a player who racked up more Premier League game time than any other Brighton outfielder in 2021/22, with Cucurella starting 35 of their 38 matches.

Thomas Tuchel was keen to bring the Spaniard to Stamford Bridge to add left-sided options to his team, both in their back three and at wing-back. The German got his man a few days before the start of the season when a deal between the clubs was finally agreed.

Cucurella is a left-footed defender with experience in a variety of positions. He has spent most of his career at full-back and wing-back, but has also – perhaps crucially for Tuchel in his decision to sign the defender – gained some experience as a left-sided centre-back in a back three. This versatility is a significant part of what makes him so useful.

When defending the wide areas in one-on-one situations, Cucurella can decelerate quickly after sprinting towards his opponent (below), in the process limiting how often he is beaten by an attacker with their first few touches. It also means he does not concede as many fouls as others might because he remains in control and composed as he approaches the ball.

Cucurella has a low centre of gravity, so he can turn to either side and sprint back towards his own goal quickly when the ball is played into the space behind him. He also uses both feet well to block crosses using his leading foot depending on which side his opponent moves the ball – an ability that even top-level full-backs and wing-backs do not always possess. This means Cucurella can deal with opponents who want to cut inside and deliver inswinging crosses, as well as those who go around the outside to provide outswinging deliveries.

He is strong in duels and usually times his challenges well, but when he mistimes an attempted tackle or interception he can be beaten by a quick opponent who touches the ball past him. Cucurella can recover well, though, if he remains touch-tight with his opponent and is able to lock them near the touchline. When he gets into a footrace against a fast winger who has significant space to attack, he can be left behind.

When he gets into a position to press high up the pitch, Cucurella is aggressive in his approach, but rarely commits a foul. He is happy to follow the ball very deep into the opponent's half if necessary (below), and he is clever with his decision-making, movement and positioning when it comes to forcing play into the pressing line of his teammates. He is tireless in his defensive work; his ability to stay with his man and press for a long time is extremely useful.

On the ball, Cucurella has the ability to provide high-quality crosses that target runners in the middle of the pitch. He can whip the ball into the penalty area from wide, and also provides accurate, low, driven balls across goal. His vision is a huge asset; he times cut-backs well to find space that has become available near or on the edge of the penalty area. A key quality to his wide deliveries is his ability to bend the ball around his direct opponent, which means he doesn’t have to take a defender on before putting a cross into the middle (below). He also puts curve on the ball to help his crosses evade the centre-backs, and will often make his crosses land in front of a defender so they also have to deal with the bounce of the ball.

These awkward deliveries enable teammates to try and get across the defence and into the space at the front post to finish early or flick the ball on. They also help create more unpredictable moments in the final third for underloaded attackers to take advantage of. By adding a bounce to a cross, Cucurella can draw mistimed first contacts from defenders, who must focus on the flight path of the ball. As they do this, an attacker is more likely to lose their marker and get on the end of the cross.

Although he is not as much of a threat in combination play as he is with his crosses, Cucurella can also create chances through quick interchanges out wide. He also has the ability to dribble directly towards defenders at pace, which means he can draw opponents towards the ball. He then shows good timing and ability, both when and how he releases the ball, before offering direct runs in behind the opposition. Even if he does not receive a return pass, Cucurella consistently shows the endeavour to drag defenders away from play, creating space centrally and underneath his new position.

Whenever Cucurella played in a back four in his one season at Brighton in 2021/22, he played with either Dan Burn or Lewis Dunk as his closest teammate at left centre-back. These big centre-backs took charge of aerial challenges in their zone of the pitch, while Cucurella provided cover in behind, and sometimes found himself in a left centre-back position as a result.

Cucurella was encouraged to push high up the pitch as Brighton almost always attacked with a narrowed front line, no matter the starting structure or formation. Therefore, Cucurella pressed deep into the final third if needed, supported by Yves Bissouma on his inside shoulder, who provided brilliant transitional cover in the space Cucurella left behind him. When defending deeper in a back four, Cucurella was always quick to move out wide to shut down opponents, delaying the ball so that a teammate – usually Bissouma – joined to create a 2v2 that was more difficult for the opposition to break through.

In attack, Brighton’s central numbers provided plenty of targets for Cucurella’s near-post crosses. Brighton’s narrow front three occupied the opposing centre-backs, with the wide players moving inside very early, giving Cucurella plenty of space to advance into (above). The midfield unit also narrowed in attack in an attempt to overload the central channel and create opportunities to play through the opposition. This provided even more options for Brighton’s attacking and talented full-backs, Cucurella and Tariq Lamptey, to aim for.

When defending as a wing-back, Cucurella was again supported by Dunk or Burn as the left-sided of the three centre-backs. His higher starting position led to even more pressing high up the pitch, particularly given that there was no teammate ahead of him due to Potter’s narrow front line in the 3-5-2 or 3-4-3 structure. Cucurella was smart in pressing inwards, with Burn ready to jump out while also anticipating any move into the wide spaces (below). Cucurella would then recover back through the middle, joining the three centre-backs to defend the next phase as a temporary third centre-back.

When Burn drove forward around the outside, Cucurella could also roll inside, and receive line-breaking passes before then looking to cross from deeper, more central positions. Once Burn moved to Newcastle, Cucurella was used as the third centre-back, providing overlapping runs around the left wing-back – usually Solly March or Leandro Trossard – to ensure he still got into positions to provide crosses and maintain his attacking threat.

A versatile and technical player with plenty of ability both with and without the ball, Cucurella has all the tools to succeed at a higher level than he has played at before. His first year in the Premier League proved he is at home there, and the step up to Champions League football doesn’t appear beyond him. If he can hold down a starting spot at his new club, there's no reason he can't step up to the challenge.