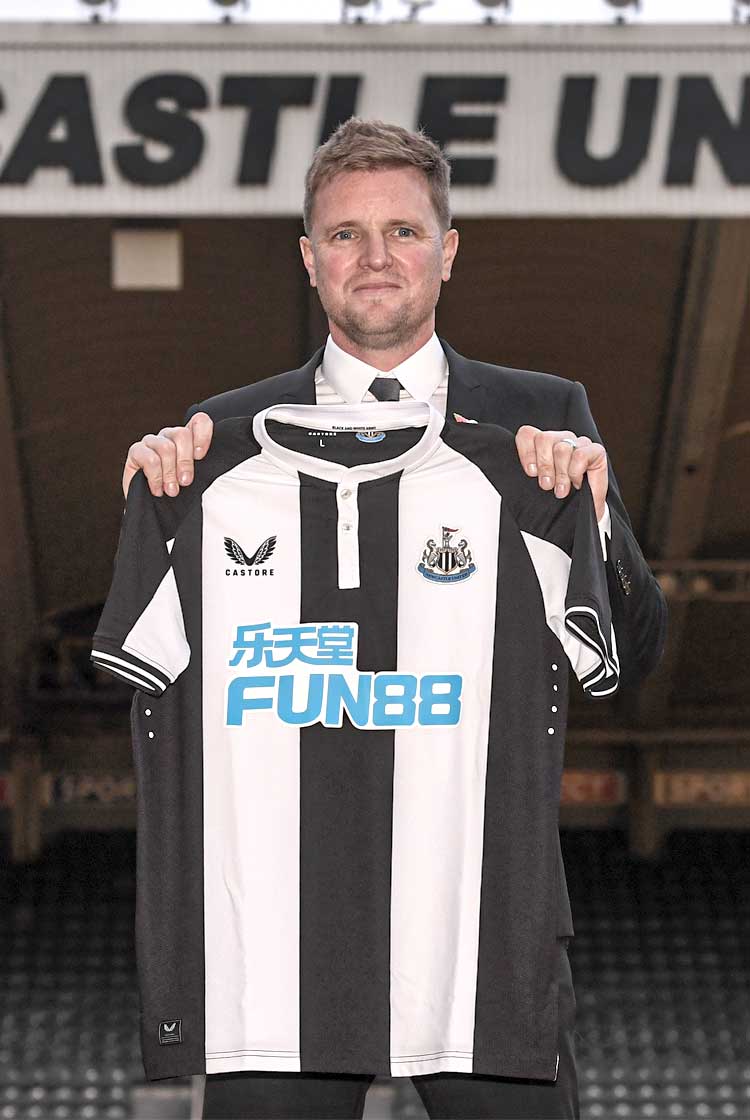 Profile
In taking Bournemouth from the brink of relegation out of the Football League all the way to the Premier League, Eddie Howe oversaw one of the most remarkable recovery stories in recent footballing history. When he took over as caretaker manager in December 2008, Bournemouth were in the relegation zone in League Two, having been given a 17-point deduction for their financial problems. Howe saved Bournemouth from the drop and went on to lead them to promotion the following season despite a transfer embargo.

Five years and a brief stint at Burnley later, Howe was managing Bournemouth in the top flight. He went on to establish them there, all the while playing an eye-catching brand of football. His success led to him being linked with several high-profile jobs, but he stayed with Bournemouth until their relegation at the end of 2019/20.

Following a year out of the game, Howe returned to Premier League management when he was named manager of Newcastle in November 2021, shortly after the club’s takeover and the sacking of Steve Bruce. Despite his success with Bournemouth, Howe goes into his new job with plenty to prove to Newcastle’s ambitious new owners. He will be expected to both win games and play attractive football; two things Newcastle haven’t enjoyed much of in the years leading up to his appointment.

Playing style
Howe led Bournemouth into the Premier League playing in a 4-4-2 led by Callum Wilson – with whom Howe has been reunited at Newcastle, along with Ryan Fraser and Matt Ritchie – and either Yann Kermorgant or Brett Pitman. The team’s width was provided by overlapping full-backs Charlie Daniels, Simon Francis and Adam Smith, with the wide midfielders playing on their unnatural side. The left-footed Ritchie dribbled infield from the right, and the right-footed Marc Pugh did the opposite from the left.

These wide players also made off-the-ball runs into central positions around Wilson, particularly when his strike partner withdrew into midfield. When this happened, one of Bournemouth's central midfielders dropped into defence to form a back three while the full-backs pushed on. Bournemouth used the same approach in 2015/16 – their first season in the Premier League – but a serious injury to Wilson left Bournemouth to adjust to life with either Benik Afobe or Lewis Grabban up front. Their rotations suffered as a result.

Their approach evolved in 2016/17. They played in a 4-2-3-1 (above) in which Josh King played as a second striker behind Wilson or Afobe, and Jack Wilshere featured in the double pivot at the base of midfield. In contrast to their 4-4-2, the double pivot sat deeper, meaning the wide forwards moved infield earlier than before. These wide forwards – picked from Fraser, Jordan Ibe, Junior Stanislas and Pugh – came off the flank to pick the ball up between the lines. Their full-backs continued to provide the team’s attacking width.

In 2017/18, Howe’s Bournemouth often played in a 3-4-3, with a narrow front three and wing-backs providing plenty of width. The addition of a third central defender came at the expense of an attacker, but there was more variety to their attacks and they became less predictable as a result.

Wide forwards Ibe, Fraser and Stanislas were all happy to move infield from the wide forward positions (below), but they also moved into wide positions to create overloads alongside the wing-backs. There were also occasions when Fraser featured at wing-back. He provided even more attacking threat from a deeper position.

When a wide forward moved towards the touchline, a central midfielder advanced, safe in the knowledge that three defenders and the other central midfielder were behind him. Despite the change to three at the back, this shape was similar to how Bournemouth had set up when they played with a back four under Howe.

Howe constantly looked to keep his ideas fresh. When he saw the need for another change, he reverted to the 4-4-2 he had once relied upon. Fraser attacked infield from the left to create chances, and combined particularly well with Wilson. On the right, a left-footer in David Brooks or Ritchie came off the flank and looked to get on the ball between the lines.

There were occasions, though, when the 4-4-2 lacked the balance of the shape with which they won promotion. Daniels provided overlapping runs and crosses from left-back, while the more reserved Simon Francis played at right-back (above). There was also an overreliance on Fraser to create. When he suffered a dip in form in 2019/20, Bournemouth created far fewer chances. The eventual switch to a 4-3-3 shape failed to save them.

With a midfield three picked from Lewis Cook, Dan Gosling, Jefferson Lerma and Philip Billing, Bournemouth had too many players who were more effective in deeper positions than in between the lines. Their form dipped with Harry Wilson looking to cut in and shoot rather than create – as Fraser had – and they were relegated.

Defending and pressing
Bournemouth adapted their press with their changing shape. The Championship-winning team of 2014/15 pressed in the centre of the pitch after possession was conceded, because their wider midfielders were already in relatively narrow positions having come off the flanks to look for the ball.

Their second striker dropped in to help, while the main striker pressed from behind the ball. When they were out of possession for longer periods, their wide midfielders dropped in to form a line of four, while the front two stayed narrow to screen passes into central midfield. There were also occasions when they faced an opponent playing a midfield three, so one of Bournemouth’s front two dropped into midfield.

There was little difference in the defensive approach of Howe's 4-4-2 and 4-2-3-1 when Bournemouth made it to the Premier League, owing to the positioning of the second striker – who often withdrew into a deeper position to add another body in midfield. In the top flight, Bournemouth dropped into a mid-block far more often than they pressed high up the pitch. They were organised and forced opponents out wide, with Steve Cook and Nathan Aké adept at dealing with crosses into the box.

Blocking off the centre of the pitch remained the out-of-possession focus when Howe switched to a back three. The wide forwards worked to block off access through the centre of the pitch – advancing to engage only if the ball travelled wide – and the central midfielders tried to stop anyone getting between the lines. The wing-backs and centre-backs would occasionally jump out to press the ball, but if a centre-back moved out, a wing-back would tuck in to preserve the back three. That back three became a back five in a 5-4-1 when they dropped into a block (above).

Fraser's pressing ability meant that, when he was selected at wing-back, he defended more aggressively. On the other side, Daniels or Smith – more natural full-backs – were instructed to be ready to drop in alongside the centre-backs more often.

Howe returned to a back four when he wanted an extra body in midfield later in 2019/20 (above). His squad did not suit a 4-3-3 shape, though, and he was forced to select King or Dominic Solanke as a wide forward – a position neither are used to playing. The team’s out-of-possession shape suffered, and they conceded too many goals as they ended 18th in the Premier League. Bournemouth's five-year stay in the Premier League was brought to an end. With it, Howe's time in charge was over.