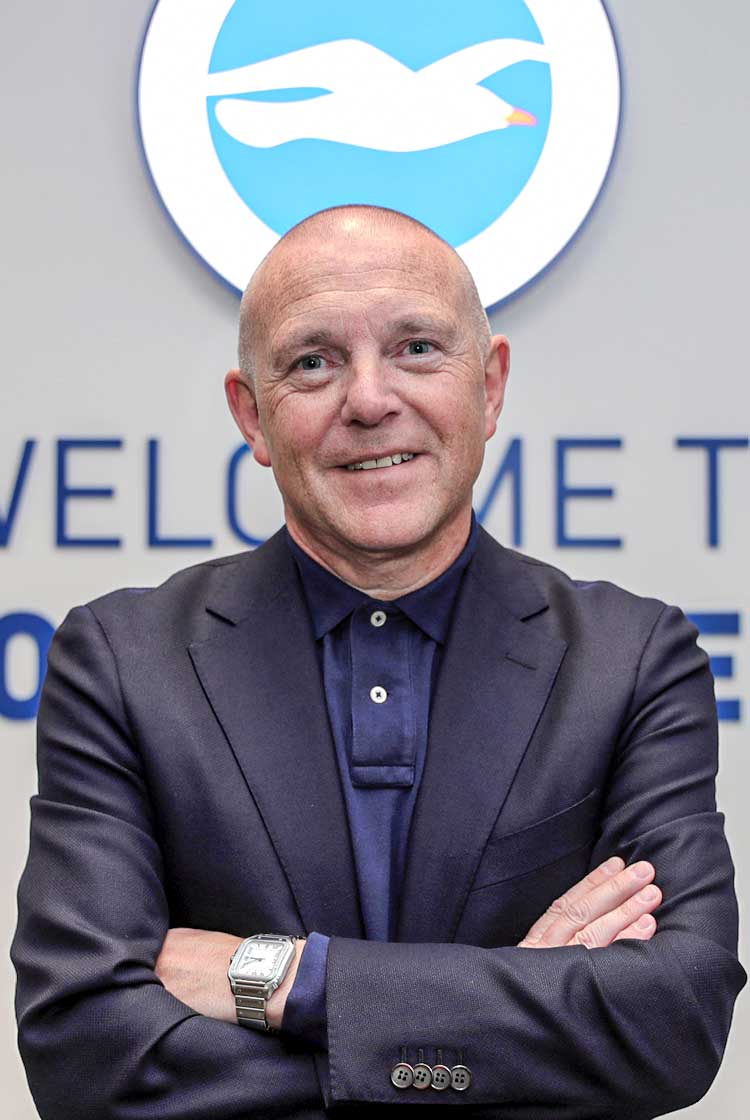 I got into football as a failed player.

But I loved football, and knew I wanted to work in the game.

I studied marketing and communications and was lucky enough that, after Euro 96, the FA asked me to join them and support a World Cup bid for 2006.

That was just part-time work, but I became the FA’s first ever marketing director a few years later.

I worked with the FA through a couple of international tournaments, so I got to see what that set-up was like before going into club football.

The two are very, very different.

I went to Tottenham Hotspur, then Vancouver Whitecaps, and now I’m at Brighton. The volume of games is so intense. You’re working week to week, rather than quarter to quarter or tournament to tournament.

The rhythm and the pattern of club football is far more relentless.

However, with the England team, the standards and the scrutiny are so high. You’re pushing to be the very best you can be all the time. Experiencing that before I went into club football meant that I had a level of expectation when I went to Spurs. I had high standards.

When others see you come in and raise the bar, it can only be a good thing for everyone else. They all see that they need to up their game, and the environment improves.

As chief executive of a Premier League club, my work is incredibly varied. On a day-to-day basis, you can’t really predict what I’ll be doing. It varies depending on fixtures, on where we are in the league – all sorts.

On a more general level, my job is very strategic. I need to be looking ahead, making targets that I then make sure we hit. I work with the owner to ensure we’re working to the budgets we need to be.

The main aim of my job, though, is to make sure the club is in the best possible place to win football matches.

It is simultaneously both one of the best things and one of the worst things about being the chief executive of a football club that, day to day, I can’t directly influence results on the pitch.

My job is just to try and create the best possible environment for our coaches and players to win matches. That’s not just the men’s first team in the Premier League and women’s first team in the Super League; it’s all the way through the academy. I want to make everybody’s job as easy as possible, because that in turn makes my job easier, too. My job is easiest when teams are winning matches.

Winning games makes the brand look better, too. People think about the club in a more positive light.

"We certainly think women's football will continue to grow"

As well as wanting short-term wins, though, we do a lot of planning ahead. If you’re a club of Brighton’s size, you’re never going to be able to compete with the fees that the bigger clubs are spending on players. You have to have a long-term plan.

We put a lot of work into developing players. We invested in a world-class training facility and are putting more money into improving it.

And we're not just thinking about the men’s and boys’ teams; we want to shore up our position in the Women’s Super League, too. We’ve invested heavily in a training facility for the women’s and girls’ teams, which will be integrated with the men’s and boys’ facility. The aim with all of this investment is that we won’t have to compete with the bigger clubs for the players they want to sign. We want to find bargains.

We want to bring in players who we can develop, so that they are either good enough to play for us or to sell for a profit.

Women’s football isn’t lucrative at the moment. It costs a lot of money to compete in the WSL and the revenues are relatively modest, but it has come a long, long way in a very short period. Sponsors and broadcasters are becoming more interested in it, and we certainly think women’s football will continue to grow. We think it is worth investing in, and we hope to see returns on those investments.

When our men’s team was approaching promotion to the Premier League, we decided to add a technical director to our staff. Dan Ashworth (below) ended up in that position, and his job is to help drive much of the strategy of the club on the football side of things.

He will work more closely with Graham Potter, the men’s first-team manager, than I do. Their aim is to establish a clear pathway for the young players we develop into the first-team squad.

Recruitment has become much more advanced over the course of my time at the club. Budgets have obviously got bigger, but that doesn’t just mean we can spend more on players; it also means we can cast our net wider and fish from a bigger pool.

We spend more on technology to help us learn about players, and we are also putting a lot more money into investing in what players are like in their personal lives. We want to know what kind of person they are and how they live.

We've invested a lot in making our recruitment the best it can be, but we still have to be smarter than a lot of other clubs due to the financial constraints on us. We have lots of people pulling in the same direction to try and achieve that.

Football is no different to any other business, in that having people united behind a common goal and clear objectives will give you a much greater chance of success. Having everybody in the club understand what we are trying to achieve, and the time frame in which we are hoping to achieve it, is really important. As chief executive, it’s my job to make sure the technical staff all understand our objectives, and then to help them sell that vision to the staff who support them.

Our vision – to consistently be a top-10 Premier League club and a top-four WSL club – is plastered all over the training ground. It’s a long-term vision, and for a club of our size it’s quite an aspirational vision – but we are ambitious and need everyone behind us. We know where we’ve come from, and will never forget how hard it was to get into the Premier League. But we still have grand ambitions, and we need every single person at Brighton to be pushing for them.

"We don't change head coach often at all. When we do, we give the decision due dilligence"

We have very strong values, and everyone at the club has to fit into those values. That includes the head coach.

We are always keeping an eye on the coaches who are making waves in the game and increasing our bank of knowledge on that front. We would never want to be without a manager without knowing who we wanted next.

But we also believe in giving our coaches time. Chris Hughton was with us for five years, and Graham (below) has a long-term contract. Our coaches should have the time and the tools they need to deliver their philosophy as they intend to. We want to give them the best possible chance of achieving success, and we’re fully aware of what that requires from us.

We don’t change head coach often at all. When we do, we give the decision due diligence. We make sure the person coming in understands exactly what resources they are going to be working with and what the expectations are of them, and we also need to be sure that they fit with our values. If those things come together, we know we have a great chance of success.

We put a lot of time and money into coach development. We’ve had a number of coaches come through our academy and move up to managerial positions, such as Nathan Jones, who has managed Luton and Stoke, and Simon Rusk, who went on to manage Stockport County.

We invest in our coaches’ future. We make sure they are doing the right courses; we let them travel to other parts of the world to learn from other people and clubs; we want them to be learning all the time.

"It's also important to us that we play attractive football"

Equally, we would never stand in their way. If a better opportunity comes along, we always let it happen – even if, in the short term, it won’t help us.

The thinking here is that if we treat them well midway through their career, they might want to come back should the opportunity arise… and we want them! Who knows where we or they will be in the future.

When I joined Brighton, we were in the Championship. We had a 20,000-seater stadium, and we didn’t have our own training ground.

We’ve changed all three of those – we have a training ground, the Amex has more than 30,000 seats and we are in the Premier League – but my ambition doesn’t stop there. We want to remain in the top flight and establish ourselves as a mainstay there.

It is also important to us to be playing an attractive brand of football – maybe more so to us than other clubs. We are doing that under Graham Potter and Hope Powell, and we aim to entertain the people who come to watch us. We want them to want to come back and watch us again.

You can’t guarantee wins, but we want to provide an enjoyable time for the fans.

"I would have loved to be a player or coach. I've ended up with the third-best option"

I am always thinking about the game and the club. I love football, so I never feel like I’m spending too much time on Brighton, though my family might disagree with me! It’s just so easy to lose yourself in a football club for seven days a week.

It is also a 24/7 business. Football is never far from people’s minds, and people consume it constantly. There is always something happening at the club, so there’s always something for me to do. I want to make sure our high standards are maintained on and off the pitch at all levels all the time.

That all means there isn’t actually that much time left over in my week. But if you love football like I do, it doesn’t feel like a job.

I would have loved to be a player or a coach, but it wasn’t to be. I’ve ended up with the third-best option.

But if someone had said to me when I was at school that I’d be running a football club for all these years, I would have signed up there and then.

I know how lucky I am.