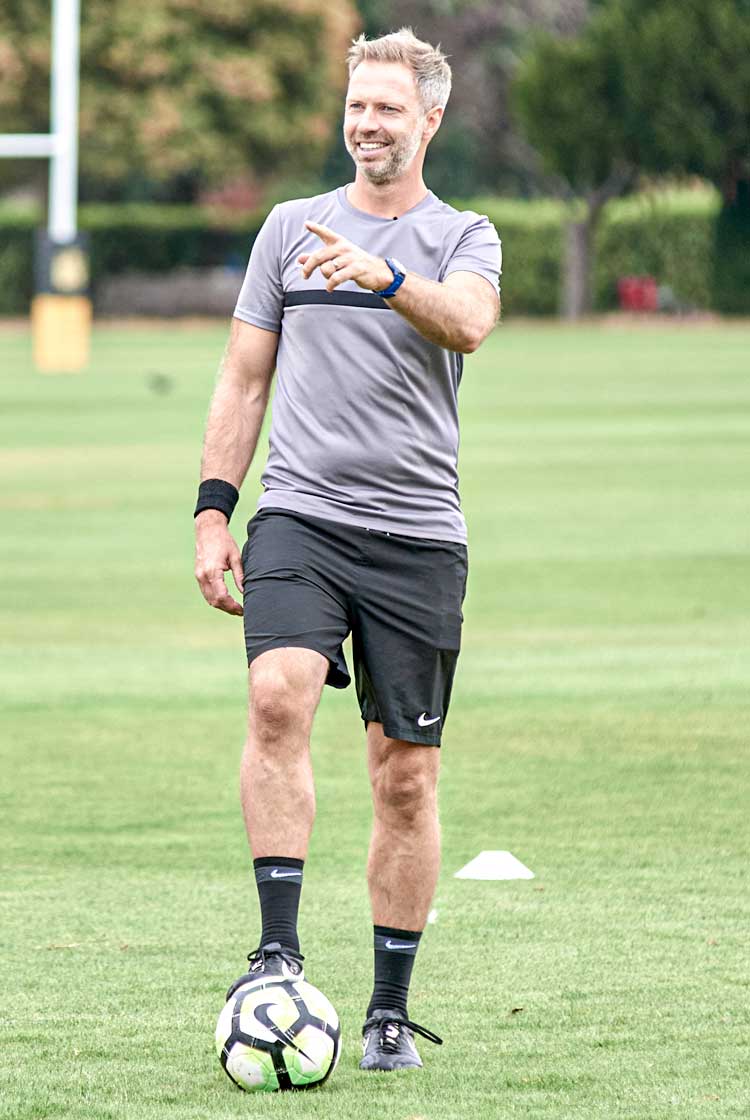 How to become a football coach

Do you have questions about how to become a football coach? Here is everything you need to know on the topic.

What is a football coach?
A football coach plans and leads training sessions with the aim of helping players improve at playing the game. Football coaches develop the skills, motivation and fitness of football players and teams. They also organise and lead the team in competitive matches.

Depending on experience and qualifications, a football coach may work with children, young adults or adults in grassroots, amateur, semi-professional or professional teams.

How do I become a football coach?
Note: the below information is non-exhaustive and is based on learning to be a football coach with the English FA or UEFA. Courses/pathways differ depending on the national association you pursue coaching qualifications through.

In order to become a football coach, qualifications are needed. There are a variety of levels of qualification, from those needed to learn the basics of coaching for use at amateur or grassroots level with children, to qualifications required to coach adult professional footballers. To do the more advanced qualifications, it is usually necessary to first pass the lower-level courses, gain experience as a coach and work your way up the coaching pyramid. Basic first aid and safeguarding courses need to be taken, too.

Here is a list of FA/UEFA courses that make up the path to the top of the coaching pyramid:

1) Introduction to Coaching Football: a four-week, entirely online course that introduces the basics of football coaching. Completing this course is not a pre-requisite for the next course.

2) The FA Level 2 has been discontinued and has been replaced by the UEFA C Licence. This is a 60-hour course that provides an in-depth introduction to coaching at grassroots level. This is the first course it is necessary to obtain if you want to move further up the pyramid.

3) The FA Level 3 or UEFA B Licence: a season-long course that teaches age and ability-specific coaching techniques to develop coaching of players through to senior amateur level. This course will help coaches learn how to design practices to meet the specific needs of their players and improve technical, tactical and physical ability. In order to take this course, the coach must be actively coaching a competitive team.

4) The FA Level 4 or UEFA A Licence: this course will develop technical and tactical coaching to improve players and teams in 11-a-side football, with a view to preparing a team and leading them into matches. It is aimed at coaches working in or aspiring to work in the professional game. To do this course, you must be actively coaching. Priority is given to full-time coaches working in the senior professional game.

5) The FA Level 5 or UEFA Pro Licence: this is the highest level of coaching qualification available. This course is for coaches who have experience in the professional game and want to become a head coach for a professional team.

There are also qualifications specifically aimed at coaching futsal, goalkeeping and youth football. Many of the professional football coaches we have worked with at the Coaches’ Voice recommend these qualifications, citing them as a helpful part of their own development.

There are also plenty of academic qualifications that can be taken, such as those in performance analysis, sports coaching and sports science. These are particularly useful for gaining entry into the professional game, where the support staff around a manager or head coach now features significantly more roles than it used to.

What qualifications do I need to be a football coach?
This depends on the level you want to coach at. Many grassroots or amateur youth teams will require no qualifications (although they may want safeguarding and first aid courses completed), but the FA’s online Introduction to Coaching Football course is a good starting point. The higher you go – both in age and ability – the more advanced the qualifications you will need.

What coaching badges can I do?
Coaching ‘badges’ is just another – and often more commonly used – term for the above qualifications. They are open to everyone over the age of 16 who has met the prerequisites to enrol.

What skills do I need to be a football coach?
To be a good football coach, you need to have good people, communication and leadership skills. You need to be personable, approachable and be able to build relationships with your players. Good organisational skills and attention to detail are also important.

What jobs can I do as a qualified football coach?
Working as a coach in the professional game is the obvious answer to this, but it is also possible to work part-time lower down the footballing pyramid. Paid work is available at some semi-professional clubs, while there are lots of unpaid opportunities at amateur level.

It is also possible to work as a football coach in non-professional academies, as well as holiday camps or after-school clubs with children.

After gaining football coaching qualifications, it is also possible to move into different areas, such as sports psychology, talent identification or goalkeeper coaching.

What hours does a football coach work?

That depends on the environment they are working in. Lower-level coaches will tend to work evenings and weekends – because the players you are coaching will be at school, work or university during the week. However, some football coaches will work in schools and so will find some work during the day.

Getting up to the professional level will increase opportunities to work more ‘normal’ hours, but evenings and weekends will be needed for matches.

What is a football coach’s salary?

There is no simple answer to this question. At the lowest level of the game, coaching roles are often voluntary, and wages increase as you go up the pyramid.

According to the National Careers Service, a full-time football coach can expect to start out on around £18,000, but with more experience, yearly salaries increase to nearer the £30k mark. Football coaches in the professional game can earn far more money, and Premier League managers earn in the millions.

Where can I find online resources to help me develop my football coaching skills?
There are many coaching resources available online, aimed at different levels and of varying quality and cost. The Coaches’ Voice Academy aims to bridge a gap in the coaching pathway between theory and practice, giving you inside access to the strategies, tactics and approach of some of the world’s best football coaches. With a focus on how and why the best coaches consistently achieve better results, we provide the insights you need to raise your coaching game. You can find out more about the Academy and subscribe here.