Profile
There is perhaps no attack in the Premier League with more options than Manchester United’s, and perhaps no more versatile player across that attack than Marcus Rashford. He has played towards the left, the right and through the centre during his career, but it was at the age of 22 in the 2019/20 season that his position settled and he started performing most consistently.

From the left of a fluid front four Rashford provided a consistent threat on goal and demonstrated an increased awareness and ability to create for his similarly potent teammates, making himself an even more important part of the exciting team Ole Gunnar Solskjaer is building. “He’s mixing up his game, he’s making defenders think,” Solskjaer said of his progress. “He runs in behind; he comes short; he can play a pass; he’s got individual skills. So, Marcus has got all the attributes to be a top forward.”

Tactical analysis
It was only towards the conclusion of 2019/20 that the debate surrounding Rashford’s best position finally apeared to end. He has produced some of his best football playing from the left – a position that provides many of the Premier League’s most potent goalscorers.

His pace, both when running at defenders with the ball and making runs beyond his opponent without it, means he is a threat wherever he positions himself. He is extremely skilled at cutting infield and shooting, even if he could improve his accuracy. He has the technique to strike the ball with power, and that will almost certainly continue to improve.

He constantly tests his direct opponent with his movement. He favours dropping deep and receiving possession in a wide position before dribbling diagonally towards goal, gathering momentum and working himself space to shoot, or darting on the outside. Defenders prefer not to follow Rashford into those deep positions because of the risk that comes with leaving spaces in behind; there are few who could compete with him in a race.

Rashford is at his most threatening, however, when he moves into a position on the shoulder of the last defender, usually on the outside of the opposing right-back, to make a diagonal dart towards goal (below). Paul Pogba and Bruno Fernandes can both consistently get Rashford into those areas, where he is exceptional, and where he possesses the pace and composure to score most of the chances they lead to. 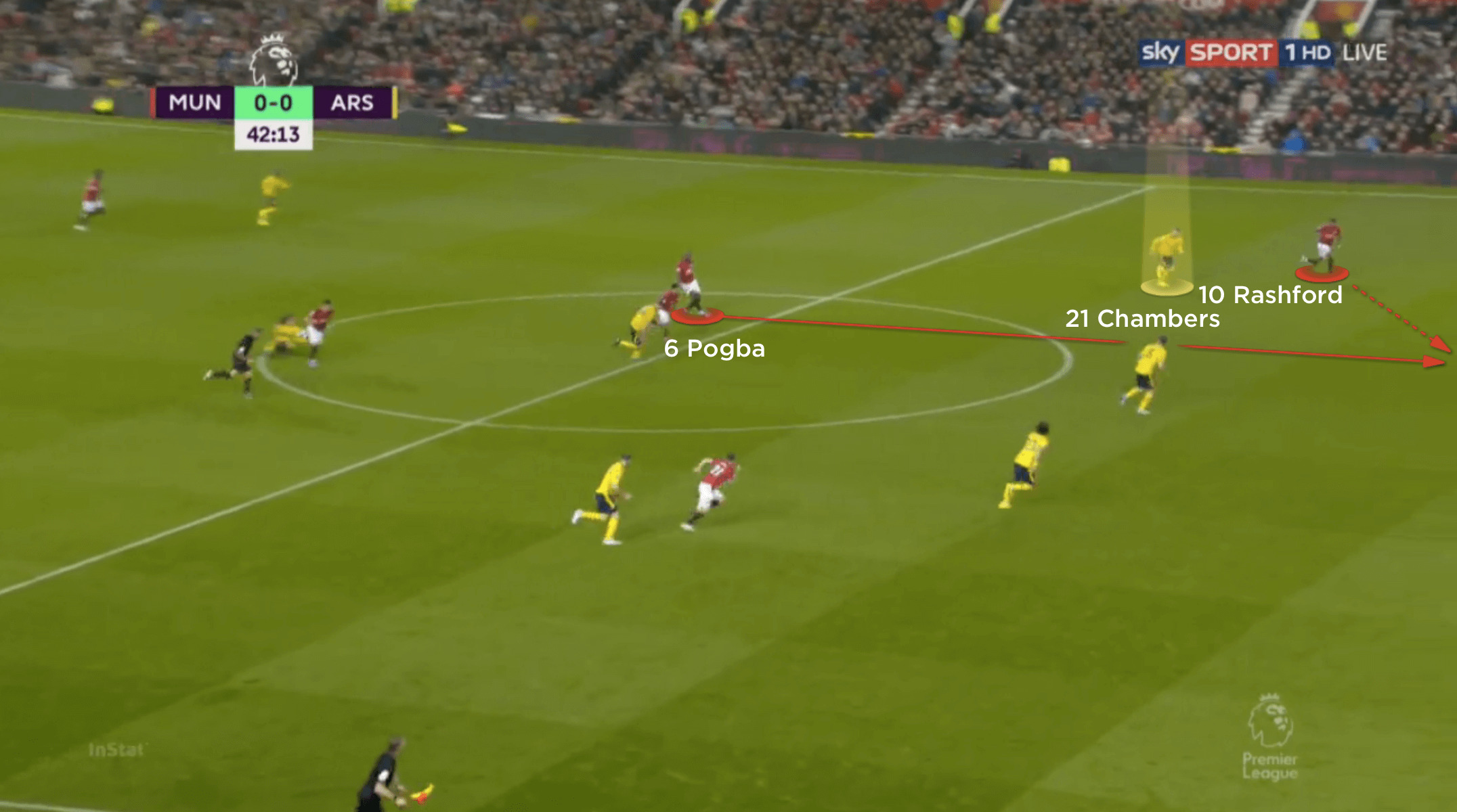 Given opponents often double up on him (below) because of that, Rashford can, simply by having the ball, create spaces elsewhere for his teammates. He has the awareness to spot a teammate’s run, but too often struggles to execute the pass he has seen, resulting in too many chances coming to little. He may even have worked on that during 2019/20’s coronavirus-enforced break; he registered three assists of real quality in United’s final eight Premier League fixtures, having managed just four in their first 30.

That increased creativity makes him more unpredictable for defenders who once expected him to try and cut in to shoot at every opportunity. He has developed another dimension that makes him even more of a threat. 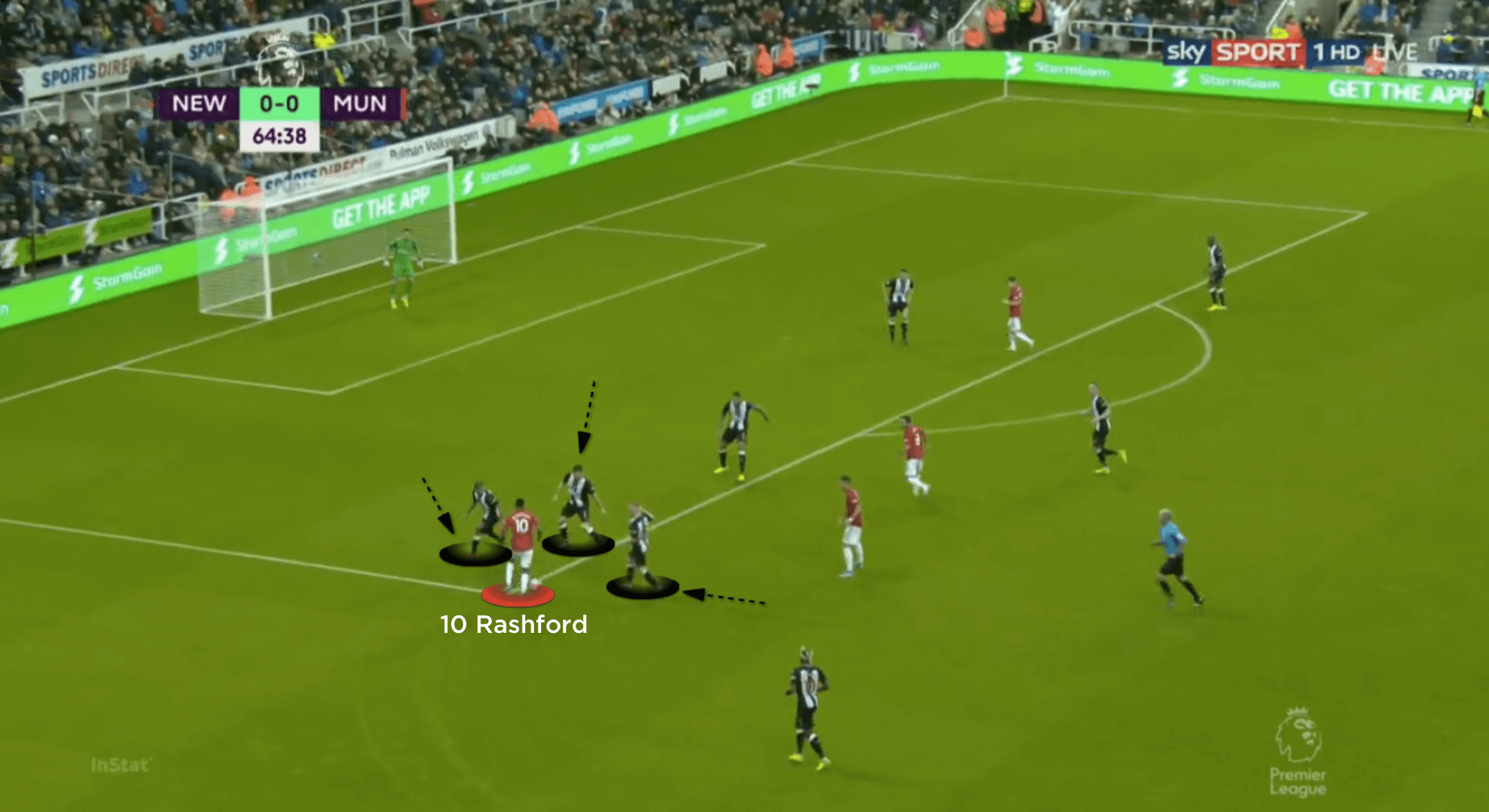 Role at Manchester United
Rashford has become a crucial feature of an attack that is brimming with potential. He plays on the left of the three in their 4-2-3-1; Fernandes is in the middle, Mason Greenwood or Daniel James towards the right, and Anthony Martial is their leading striker. All four positions provide goals. Rashford advances higher than the right-sided attacker; Greenwood is more comfortable coming infield. A common theme in how United progress play is a pass to Greenwood, who turns on to his stronger left foot and quickly switches towards Rashford on the left.

The arrival of Fernandes in January 2020 gave United an increased presence in central attacking midfield positions, and has benefitted Rashford significantly. When Rashford runs with the ball towards the opposing right-back, Fernandes provides an option for a square pass that previously didn’t exist. He can therefore either play one such pass and swiftly look for a return pass in behind – one Fernandes has the ability to execute – or use Fernandes as a decoy and instead feint to go inside before dashing around the outside with the ball. 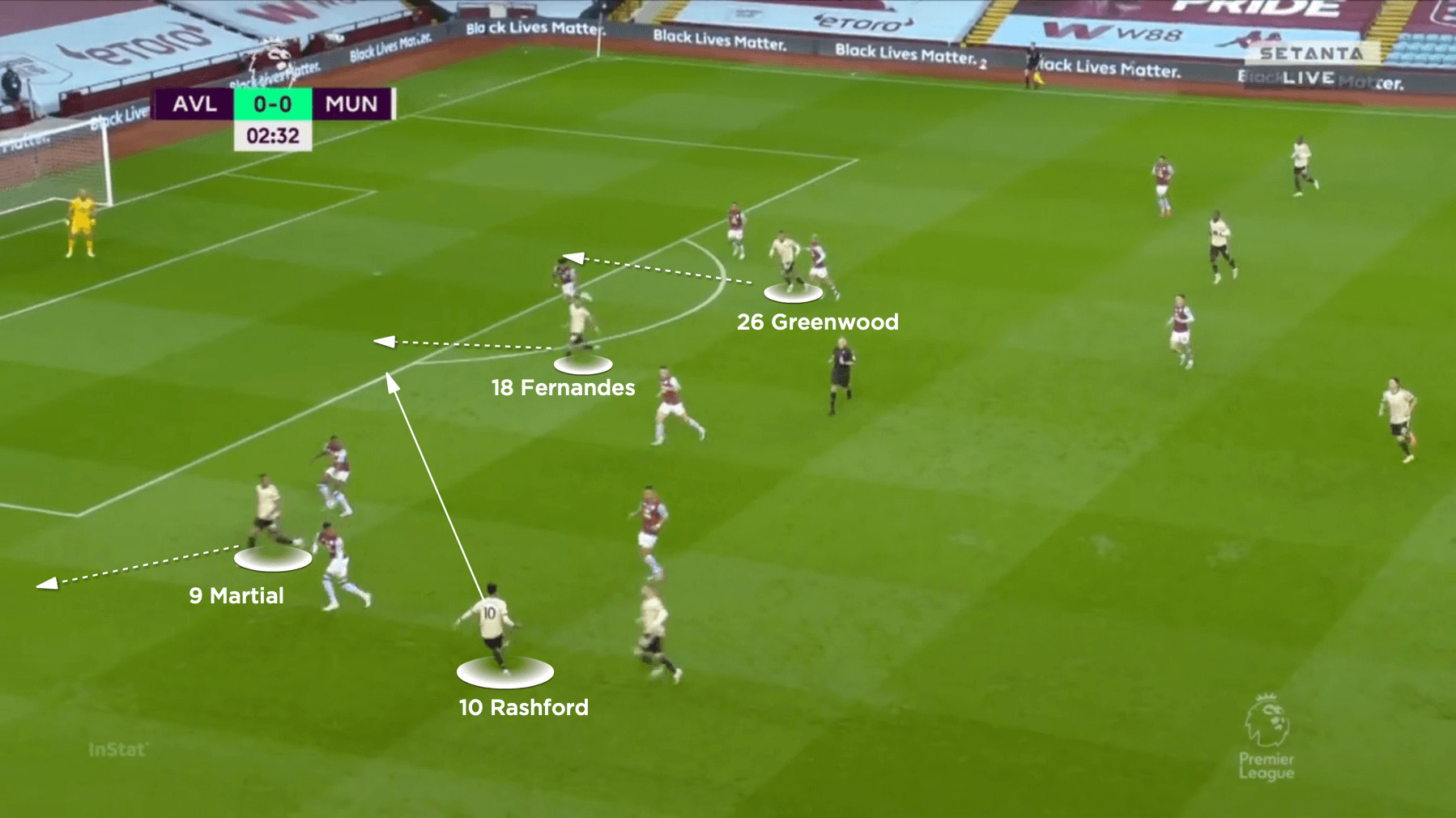 He has also developed his ability to create from deep. Increasingly, when there isn’t space to run in behind, Rashford moves into a deeper position, Martial makes a run across him into a more advanced position on the left – taking a defender with him – and Fernandes and Greenwood move into space for Rashford to find them (above). He often plays a chipped pass, which is incredibly difficult to deliver and only rarely finds its target; attacks with those patterns are more effective when he passes on the floor.

United are improving against teams who sit deep – Fernandes has been influential in that – but they are still at their best on the counter. Rashford’s ability to carry the ball at pace makes him particularly valuable. The end of 2019/20 suggested United were significantly improving, particularly against teams that sit back. Their young attack should also improve, so there is no reason Rashford should not be targeting a career-high goals tally, beyond his 17 Premier League goals of 2019/20. 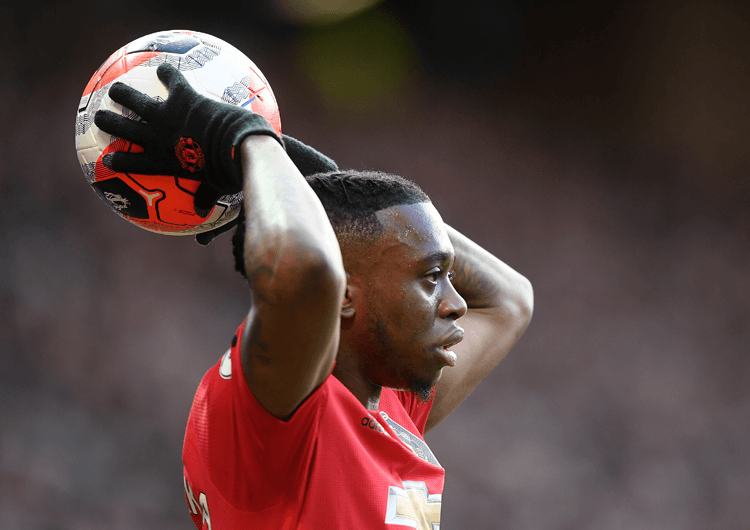 Manchester United spent £50m recruiting Aaron Wan-Bissaka from Crystal Palace. We analyse his progress a year after his career-changing move

Luiz Felipe Scolari built a relationship with Sir Alex Ferguson while he was Portugal manager. Here he revisits those who inspired him throughout his decorated career 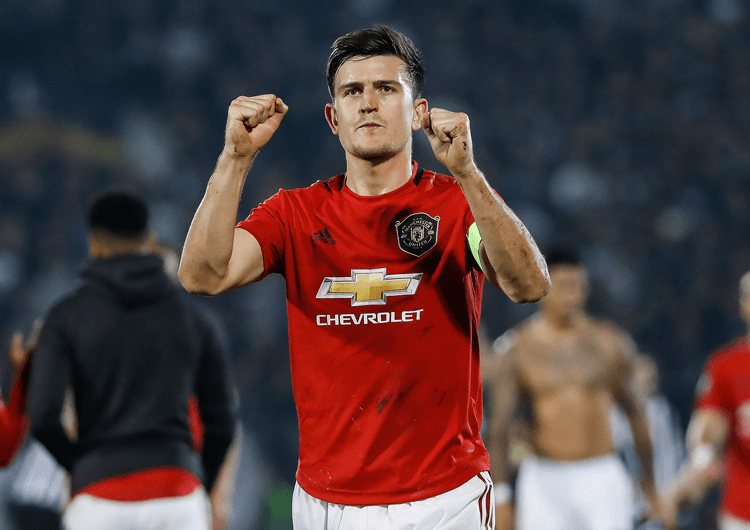 Manchester United made Harry Maguire the world’s most expensive defender. Our professional coaches assess what he has brought to Ole Gunnar Solskjaer’s team