Profile
Of the many millions of pounds Manchester United have invested in new players since Sir Alex Ferguson’s retirement, the £47m spent recruiting Bruno Fernandes is perhaps proving their shrewdest. Since Ole Gunnar Solskjaer’s appointment, Aaron Wan-Bissaka and Harry Maguire have also been significant signings, but it was Fernandes’ arrival in January 2020 that transformed their season from one that was likely to conclude in disappointment to one that finished with them qualifying for the Champions League.

“Bruno has come and been fantastic,” Solskjaer said of the midfielder whose first 14 Premier League appearances brought him eight goals and seven assists. “He has brought that winning mentality with him – that 99 per cent is not good enough. It has to be 100 per cent.”

Tactical analysis
During his time at Sporting Lisbon, Fernandes demonstrated he poses a consistent threat in the final third. He provided a regular source of goals – since his debut in August 2017 a total of 52, many of which came from distance, and owed to his fine shooting technique (below), either during open play or from free-kicks.

That technique, particularly with his right foot, is a significant strength and involves him gaining both power and accuracy when shooting across goal – potentially adding swing and curve in both directions, and therefore often around defenders or goalkeepers, from a wider position. Unlike many strikers, Fernandes shoots most effectively when he is drifting away from central positions, which encourages him to bend those efforts into the furthest corner.

A consistent move has been attacking the spaces between a full-back and central defender and then shooting with power and accuracy across goal, either with his instep or the outside of his foot and towards the bottom corner. He often played in such advanced territory for Sporting that he could be seen finishing the second phase of an attack, having instinctively gambled on second balls, and struck from closer range.

Similarly to other goalscoring midfielders, Fernandes has also regularly scored from the penalty spot. His favoured approach involves adding a skip to his run up, just before striking, and demonstrates his confidence and the relative bravery that are significant features of his wider influence, and which contribute to his creative abilities. 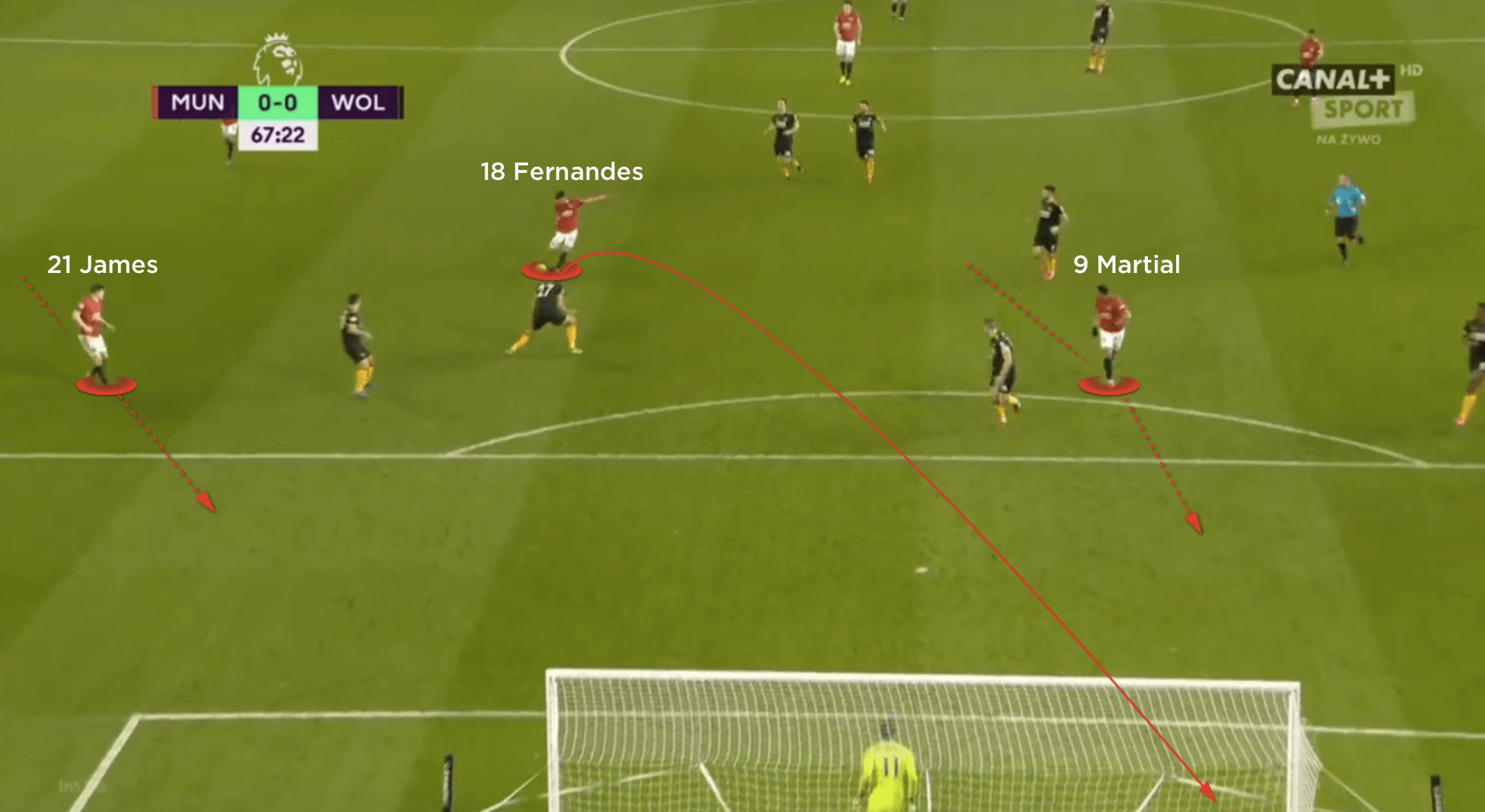 He is effective in both deeper and wider positions, where he can start attacks. One technique involves him pausing in possession (below), to encourage teammates to adopt more effective positions and to observe, in greater detail, the spaces and options available. Doing so can draw out defenders, often in isolation, but also create spaces for teammates – a skill that the renowned trio of Sergio Busquets, Xavi and Andrés Iniesta displayed for both Barcelona and Spain.

His ability to play high also means that his teams can press with a 4-4-2 formation in which he advances from midfield alongside a striker while remaining available to withdraw into central midfield to provide a further number or negate a potential overload. When he does so, the aggression, desire and intelligence with which he presses – when he adjusts to subtle changes of direction from the ball-carrier – not only make him effective, but similar to his compatriot Bernardo Silva. 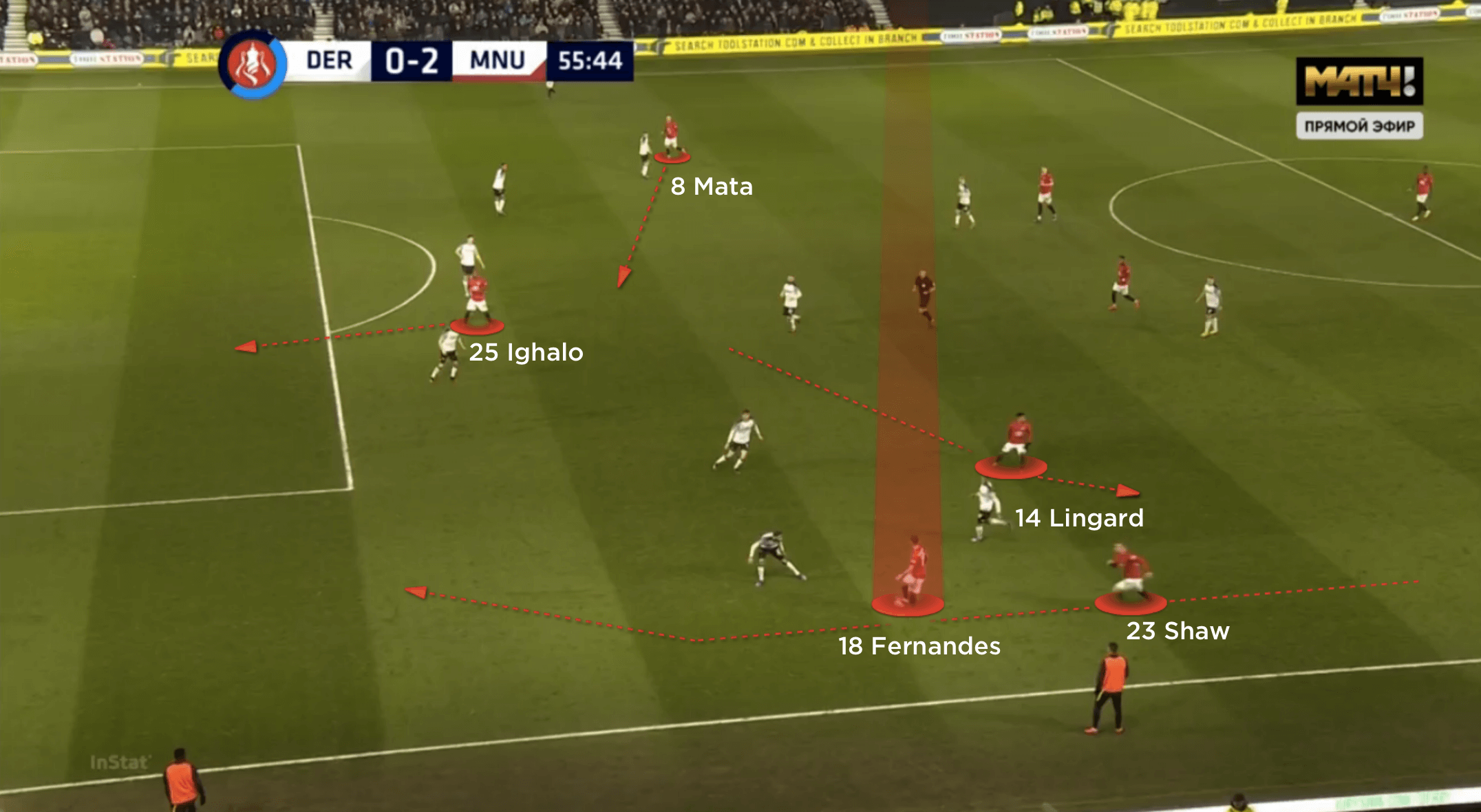 Role at Manchester United
Upon his arrival at United, Fernandes was initially used in a deeper attacking role than that seen at Sporting, even if he nominally started as their number 10, largely because those who feature in front of him – mostly Anthony Martial, Mason Greenwood and Marcus Rashford – already make runs in central areas and the spaces he often sought in Portugal. He is able to test opposing goalkeepers from outside the penalty area, and he has built a promising rapport with Paul Pogba.

Where the intelligent movements and combinations with others help create space for Fernandes to operate in between the lines, Pogba offers crisp, penetrative passing and driving forward runs that can create imbalances in opposing defences – exactly the kind of environment Fernandes relishes. Those qualities can be expected to continue to prove particularly valuable against opponents defending with numbers and in a lower block, which is when United have often struggled. 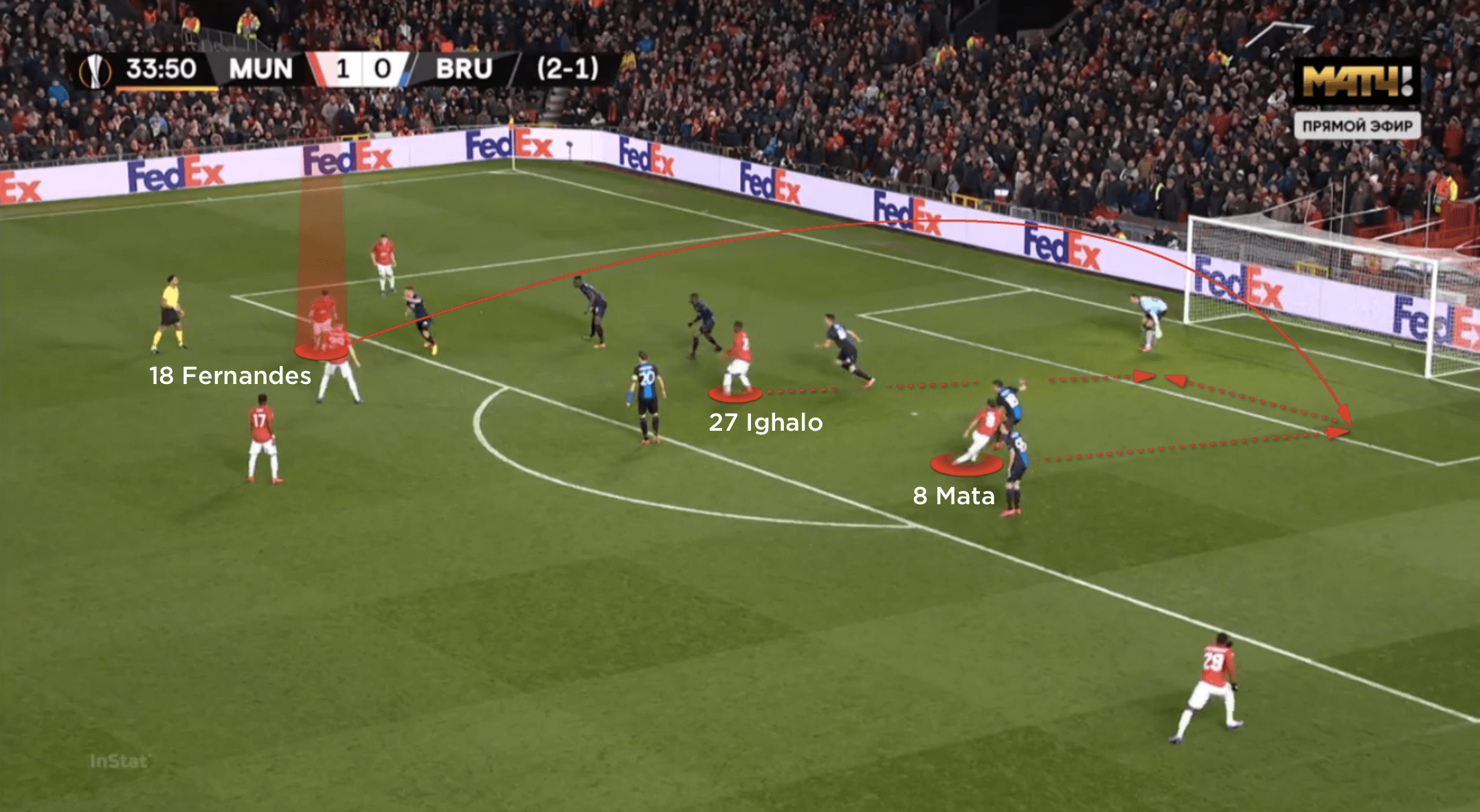 His variety means that he can unlock defences from central and wider positions, on both sides of the pitch, but the quality of his release, particularly from deeper positions, can sometimes lack accuracy. Even if Solskjaer intends on developing a team that is both attacking and dominates possession, United will need to retain the ability to swiftly attack on the counter from those deeper positions.

The development of his favoured 4-2-3-1 particularly intrigues. Fernandes is already combining effectively with an overlapping left-back, especially via passes inside the defending full-back; wider positions from his role as their number 10 invite him to play deft balls over or across opposing defences towards those attacking from the right (above). As the understanding between Solskjaer’s preferred front three develops – Greenwood has become the most common starter on the right – the influence of Fernandes is only likely to grow. 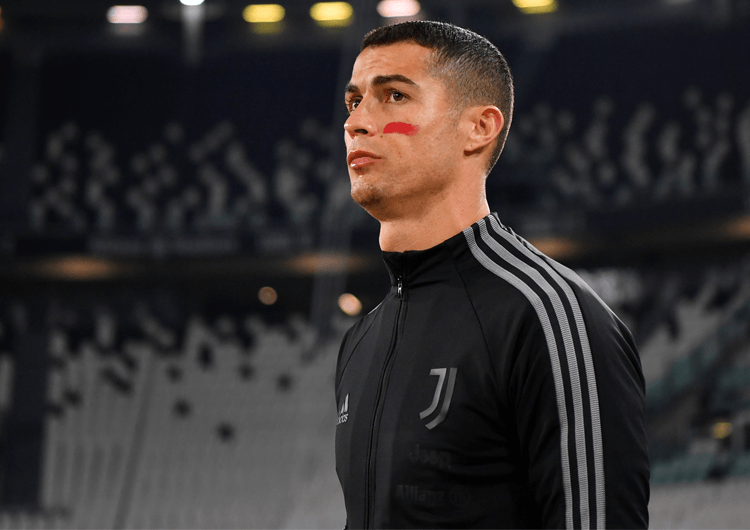 Cristiano Ronaldo has been tasked with inspiring Juventus to take their dominance of Serie A into the Champions League. We examine his qualities 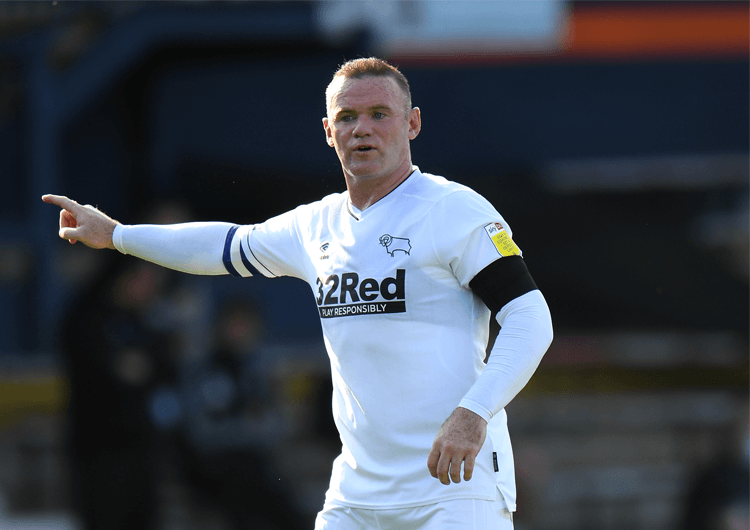 Wayne Rooney excelled in midfield for Derby County before retiring to become a manager. We assess the evolution of a great for both country and club