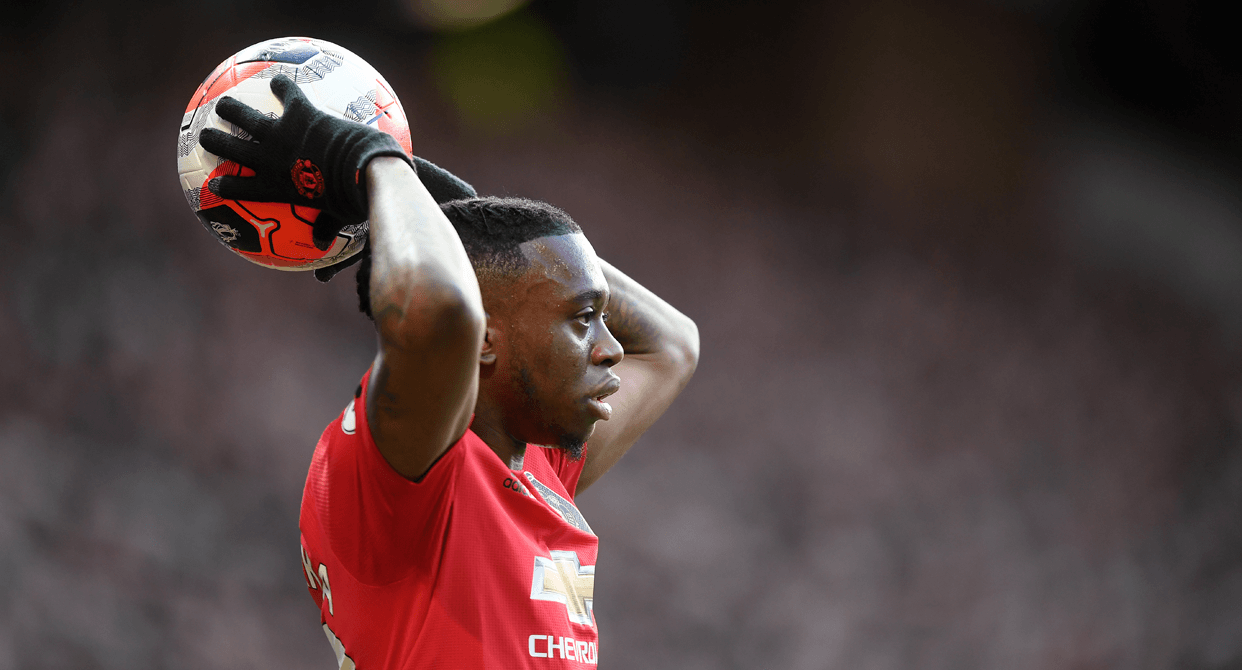 Profile
When Aaron Wan-Bissaka joined Manchester United from Crystal Palace, for a fee that could reach an eventual £50m, he essentially arrived as the long-term successor to their former captain Gary Neville. The injury problems that undermined so reliable a performer towards the end of his career had contributed to Wes Brown, John O'Shea, Rafael da Silva, Antonio Valencia, Diogo Dalot and Ashley Young each having runs as United's senior right-back, and perhaps only Valencia – a converted winger – consistently succeeded.

Roy Hodgson gave Wan-Bissaka his senior debut in February 2018, and he quickly established himself as an important player for Palace, requiring little more than full season of first-team football to convince United of his readiness to compete towards the top of the Premier League. In Kyle Walker, Trent Alexander-Arnold, Reece James, Max Aarons and Wan-Bissaka – and particularly given the way the latter has also impressed at wing-back for United – England have also perhaps never had finer options at right-back.

Tactical analysis
Wan-Bissaka’s greatest strength is his ability to defend one against one. His capacity to nimbly shift his feet and hips means he can jockey tricky wingers who, at the highest level, regularly pause and accelerate numerous times with short and frequent bursts in their attempts to beat their opposing defender.

He also favours encouraging his direct opponents along the touchline (below) and curving his press to minimise their opportunities to diagonally dribble infield, and leaving a slightly increased space when shepherding those opponents into wider spaces before committing to a direct race against them. He regularly attempts powerful sliding tackles – across both the ball and the relevant opponent – but, owing to the location of those tackles, attacks are only temporarily disabled because his technique means possession going out of play instead of being turned over.

For him to continue to improve, he will need to learn how to instead secure the ball for his team. It is when forced to press infield – perhaps against a wrong-footed winger – because the positioning of his teammates invites them to compete for or collect second balls, that that willingness to slide into tackles is more valuable.

The highest calibre of winger – the opponent he will most regularly have to defend against – has become as strong as he is fast, and Wan-Bissaka has similar physical abilities. He is capable of matching them, stride for stride, and of offering the necessary upper-body strength to duel directly with them or use his arm to delay their runs and movements.

It is when competing aerially that he is less effective (below), both physically and when duelling. If he is so far yet to be repeatedly exposed, direct balls towards a strong attacker – perhaps similar to Dele Alli or Richarlison – drifting away from an imposing central defender who may be occupied by a striker are likely to unsettle him.

Compared to many of his rivals, despite being a useful crosser of the ball – particularly when shifting it around an opponent and playing it low and powerfully across goal – he is also far less effective in the attacking half. Those balls succeed into a crowded penalty area; if he can complement them with deeper deliveries, perhaps by taking a bigger first touch out from his feet and then aiming towards the far post, and an improved positional awareness when not defending he will become even more rounded.

Role at Manchester United
Wan-Bissaka has, as expected, continued to defend superbly when one-on-one during his time at Old Trafford, contributing to the increased consistency and stability that had largely been absent from their defence since the declines of Rio Ferdinand and Nemanja Vidic. Throughout 2019/20 he made more tackles than any other teammate, and at an impressive success rate.

The sliding tackles he makes in central areas of the pitch are particularly effective from within Ole Gunnar Solskjaer's favoured 4-2-3-1 formation. United's options at the base of midfield are powerful and assertive – strong at duelling and both alert to and intelligent in judging where to press and move – and capable of recovering the loose balls those tackles lead to.

His ability to delay opponents is similarly influential. Daniel James, Mason Greenwood and Marcus Rashford represent fine counter-attacking options, and behind them Wan-Bissaka's defending increases United's potential during transitions in wide areas (above). By the full-back delaying the relevant opponent, the opposing full-back is likely to overlap and advance and, while that means the forward in front of Wan-Bissaka withdrawing into a deeper position, when possession has been won he can then released into an increased space.

Greenwood's increasing emergence towards the right of United's attack has contributed to Wan-Bissaka having increased spaces to attack into, and reduced attention from opponents. The former's desire to diagonally dribble into the penalty area, and the goal threat he poses, draws defenders, in turn leading to Wan-Bissaka making an increased number of assists. In combination, their age and potential may even draw comparisons with the partnership that once emerged between Neville and David Beckham.