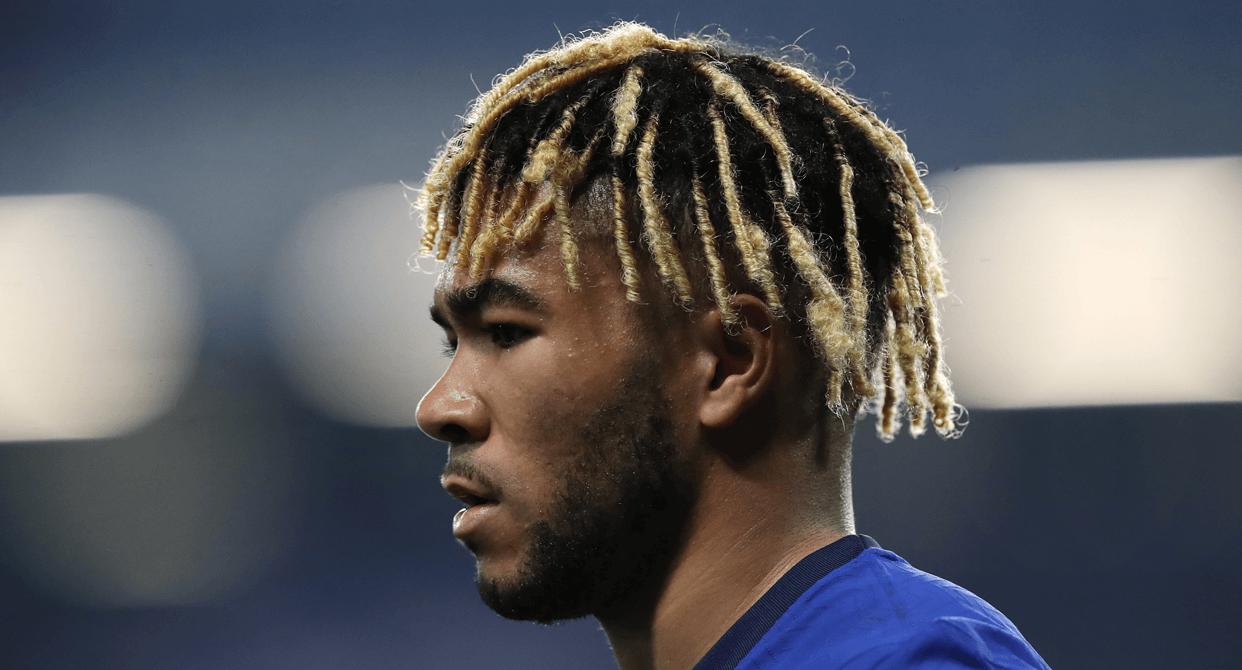 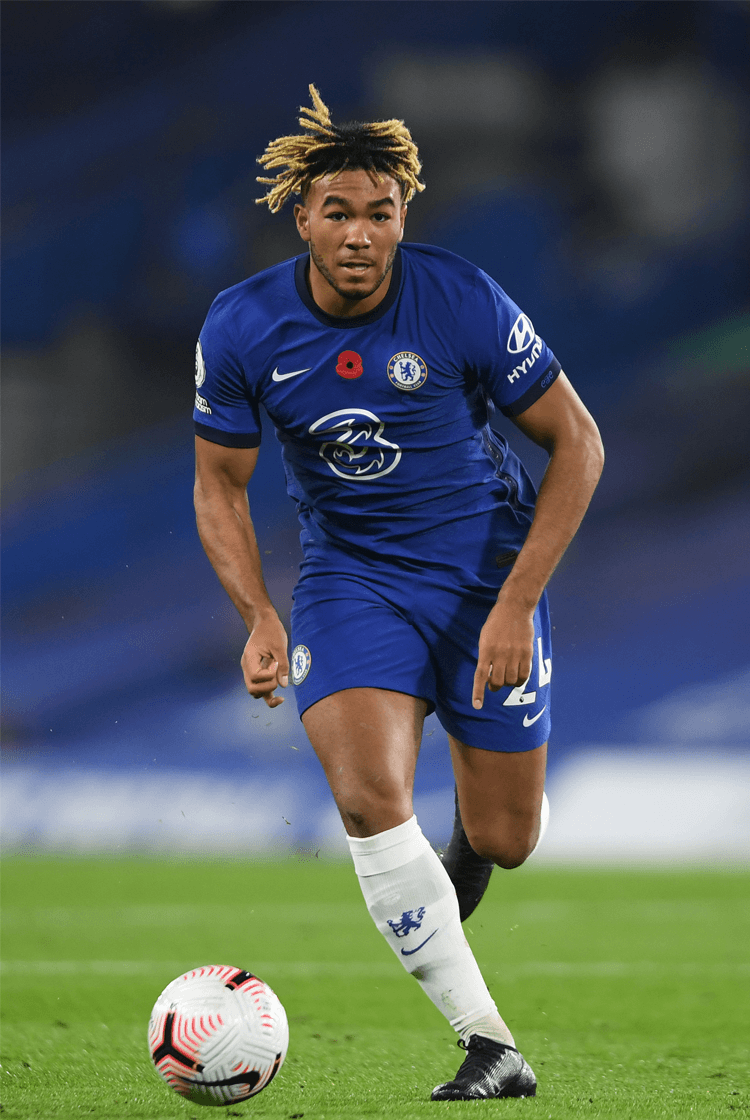 Profile
When it comes to young, English talent, these are exciting times – and in no position is that more apparent than at right-back. Trent Alexander-Arnold, Aaron Wan-Bissaka, James Justin, Matty Cash, Tariq Lamptey, Max Aarons and Chelsea’s Reece James promise a bright future for the national team.

James, who impressed on loan at Wigan in 2018/19 while gaining a full season’s experience in the Championship, showed upon his return to Chelsea that he was ready to play in the Premier League – and at the top end of the table. Under Thomas Tuchel in 2020/21, James is continuing to improve and has worked his way into Gareth Southgate’s England plans. “The style of play that he’s brought in was evident and clear for us to understand,” says James of Tuchel. “The more we play together, the stronger we will be. Game by game, we will get better and build together.”

Tactical analysis
James already looks close to the complete full-back. The breadth of his talents is highlighted by the fact that, as a teenager, he made 13 of 44 starts in his season with Wigan in the Championship in central midfield, where he looked perfectly comfortable and often shone. At Chelsea, he has played both at right-back and at right wing-back, with the experience of playing in midfield helping to make him ready to play in the Premier League in a position where he has slightly more time on the ball.

He is a technical footballer, and much of his most eye-catching work comes on the front foot. An attacking right-back who strides forward purposefully with the ball and can beat an opponent, James is always looking to get into a position to put a ball into the penalty area. He is adept at taking defenders on around the outside by pushing the ball ahead and beating his opponent for pace, but he also has the close control to wriggle his way out of trouble – a useful skill for a central midfielder, and one that makes him an even better full-back. There are occasions when his first touch lets him down slightly, but he manages to resist pressure with a drop of the shoulder, a quick change of direction or even a nutmeg to leave his opponent behind.

James’ former manager, Frank Lampard, called the right-back a natural crosser of the ball, and that is certainly the strongest aspect of his game. Much like Alexander-Arnold at Liverpool, he provides a consistent threat down the right flank, able to put balls into the middle with a variety of techniques and, as a result, from a variety of positions.

He is most dangerous when crossing from in line with the edge of the penalty area, when he has been afforded the space to bend his cross around the nearest defender. He strikes across the ball to generate significant outswinging curl, so he can bend the ball into the area between the goalkeeper and the last line of defenders for a teammate to attack (below).

James is good at finding himself space to cross, often doing so via a one-two with a central midfielder followed by a sprint towards the byline (below). He is fast enough that this regularly results in him finding space to cross, but his technique naturally suffers when he tries to cross while moving at speed. He is far less consistent in these situations, so he has more success when standing a cross up with a higher trajectory and less pace on it – making it easier to defend – than when he tries to whip it in. The latter often leads to him failing to beat the first man with his crosses.

What often makes James’ deliveries so dangerous is how early he puts a cross in after receiving the ball. He quickly lifts his head to identify his target after taking his first touch, before putting his cross in with his second. In doing so, he maintains the pace of his team’s attacks while affording the opposition defenders little time to prepare.

His technical ability extends to direct free-kicks and corners, and he retains accuracy with his dead-ball technique even when striking with power. He doesn’t provide the same level of set-piece threat as Alexander-Arnold, who is among the best in the world, but there are positive similarities between them as right-backs with the class to play in central midfield and superb crossing ability.

When defending, James prefers to show his opponent on the outside and use his body to manoeuvre the attacker off the ball. He therefore needs to do two things more consistently: he must not attempt to anticipate his opponent going around the outside, because he risks leaving too much space on the inside for them to dart into; and he also needs to stand off a little more, because particularly quick wingers could eliminate him with one big touch and expose the player behind him.

Role at Chelsea
After initially experimenting with Callum Hudson-Odoi at right wing-back, Tuchel has settled on James as his first choice on the right side in the 3-4-2-1 formation he has most often preferred since taking over at Chelsea. With the two attacking midfielders playing more like wide 10s than wingers, it is up to the wing-backs to provide the team’s width.

When Chelsea attack, they move into a 3-2-5 formation, with the three attackers staying narrow in an attempt to squeeze the opposition’s defence together, and the wing-backs pushing high to exploit any space on the outside (below).

James has struck up a positive relationship with Hakim Ziyech, who usually plays ahead of him on Chelsea’s right. Ziyech’s natural game is to move off the flank to create with his wand of a left foot, often with chipped balls from an inside-right position over the top of the defence. He is so dangerous doing this that the opposition’s left-back will generally be tempted to stay tight to Ziyech and try to prevent him using his left foot. This is where James comes into his own; if the left-back slot is left vacant, he will take up the opportunity to run into it.

Ziyech will also sometimes receive a pass in an inside-right position and take advantage of the fact that his closest opponent will want to show him on the outside, by accepting their invitation and quickly spreading the ball out to James, who will have advanced upon seeing him receive the ball. Under Lampard, there were more opportunities for James to move into and cross from the right half-space – with the winger taking up a wider position – but that is no longer the case under Tuchel’s lead.

Due to the high and wide position James is asked to take up, he often finds himself in an advanced position when Chelsea lose the ball, and so he is regularly involved in their pressing high up the pitch. He does this with enthusiasm and commitment, and selects his angle of approach well, cutting off passing lines as well as showing play towards his teammates – who, under Tuchel, attempt to crowd out the opposition by committing lots of players to a compact zone of the pitch. James plays an important role in these attempts to turn the ball over high up the pitch.

James is unquestionably a special talent with an extremely bright future. As is the case with so many of England’s young right-backs, he is most definitely worth getting excited about.