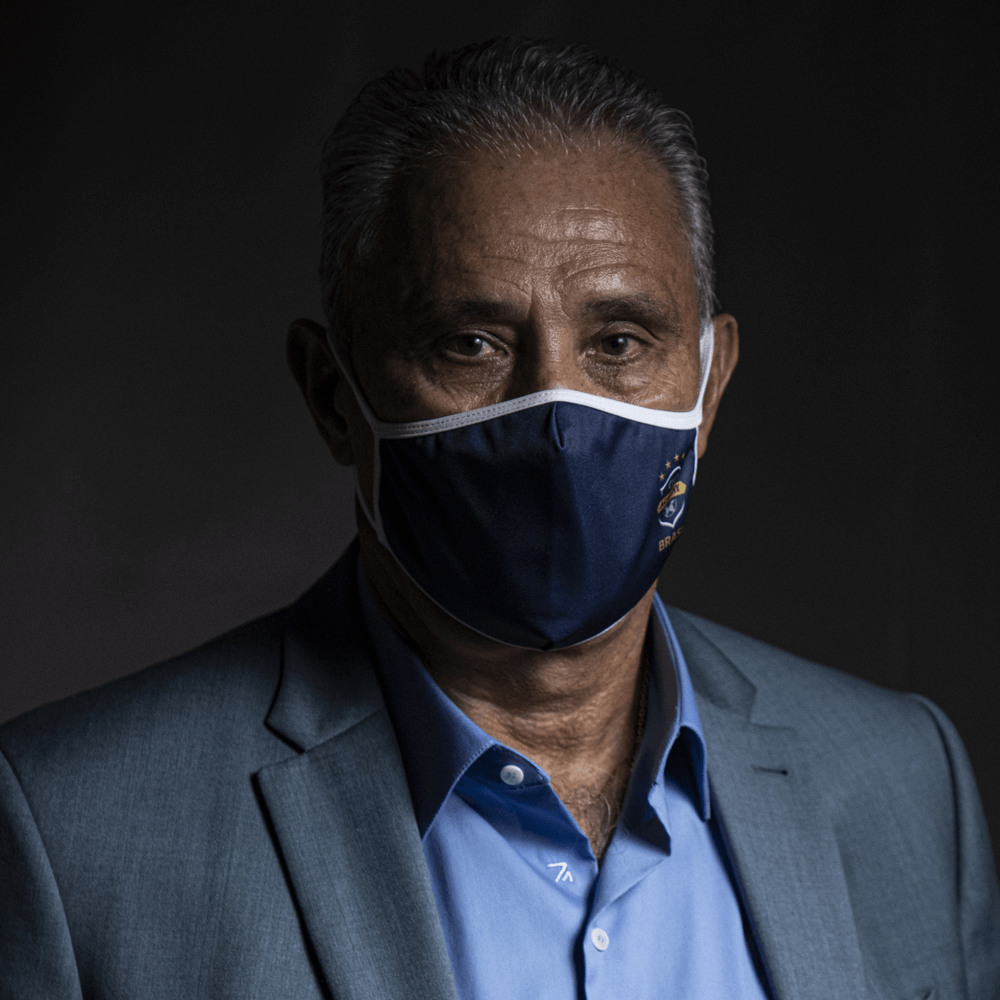 When Edu gave me the news, I could not believe it.

I knew it had to be something semi-serious because he’d been forced off, but I didn’t give it my full attention at the time.

During a game, because of the concentration levels needed, you have to constantly make a list of priorities. At that precise moment, I was focused on the team, its organisation and – crucially – who was going to replace Neymar.

This was a friendly against Qatar in June 2019. I was focused on winning the game.

After the final whistle, my thoughts turned to Neymar. I was told about the extent of his injury.

I was assured that our worst fears were indeed confirmed.

Neymar (below) was out of the Copa América.

It was an emotional night that night. When I saw Neymar, I gave him a big hug. We organised a dinner with the entire squad, where I told them the best way of honouring him was to respect and continue our work as a group.

More than ever, we had to show how we worked as a collective; how our team spirit was stronger than ever.

And the moment that proved that was true came at the tournament when, after our semi-final victory over Argentina, I saw Neymar heading for the changing room to celebrate with his teammates.

"we managed to neutralise messi and keep him quiet. It was right that we celebrated"

I like to leave my players to it in moments like that, so I didn’t go inside – but I saw the happiness in his face as he went into the changing room. I saw how much he was a part of that team without even playing.

That was a special moment, at what had been a special tournament.

We were playing at home, and there had been an expectation that we would repay the fans after the 2014 World Cup – which had ended with the 7-1 defeat to Germany.

We certainly wanted to.

In that semi final (above), our team was clever and produced a brilliant attacking performance against a great team: the Argentina of Lionel Messi, Sergio Agüero, Lautaro Martínez and many others.

In attack, we were very good – the build-up to our first goal was quite beautiful – and in defence we were solid. We managed to neutralise Messi and keep him quiet. It was right that we celebrated.

The players were entitled to celebrate the win. It would have been insensitive to try and deny them that joy.

"i hate losing. it makes me well-suited to the brazil job. there is a winning expectation"

But, while you can be pleased about beating Argentina and reaching the final, you can’t let that turn into arrogance – even if we were to face Peru in the final. There was no room for complacency, vanity or lack of focus on the job.

You have to be awake to that fact from early on in your preparations. As a coach, you can’t just expect to turn up on matchday, give a great speech and think that will be enough.

You have to make sure you’re satisfied with your preparations to give your team the best possible chance of winning. And I had to make sure we won that match.

I think that is something that makes me well-suited to the Brazil job. There is a winning expectation, a winning mentality.

That is something I proved I have, too, during my time at Corinthians.

It wasn’t until 2012 that I even considered that I might one day get to manage Brazil.

Up until then – when I won the Club World Cup with Corinthians – I would never have been in contention.

Then that title changed everything.

It meant I had a genuine chance of managing the Seleção one day.

I went on to have even more success with Corinthians. We won the 2015 Brazilian league title, breaking every record and playing some beautiful football. We were efficient, aggressive, played good football and created lots of chances.

After that, I was more than just a contender.

The previous manager was no longer in the job. The position was vacant.

I travelled to Rio for a meeting and heard about the Seleção project. It was just after Brazil had been eliminated at the group stage from the Copa América Centenario in 2016. They had finished below Peru (below) and Ecuador in a four-team group.

On top of that, they were sixth in South American qualifying for the 2018 World Cup. Qualification was far from certain.

I needed to know the association’s plans and ambitions for the future.

When the offer came, I took a day to weigh it up; but, really, I couldn’t turn it down.

Our form picked up, and we won eight qualifiers in a row to finish top of the qualifying group – a full 10 points clear of Uruguay in second.

"some say the belgium game was the best of the tournament – that is not for me to say, but it is hard to disagree"

There was a little nervous energy around the team going into the World Cup, after what had happened in 2014.

When we conceded an equaliser to Switzerland in our opening match, that feeling was even more noticeable. Nerves ran through the team, and we ended up drawing that match.

Then, our next game was a tough one against Costa Rica. We created lots of chances, but we lacked efficiency in front of goal. We tried and tried but struggled to find a way through.

But we were persistent and focused until the very end, which was really pleasing to see. Eventually we broke our opponents down, and scored twice in injury time to win 2-0 (below).

After that, we won comfortably against Serbia in our final group game. We were improving as the tournament went on, and we could feel it.

We put in another good performance against Mexico, which included one goal that was almost perfect in how we moved the ball around to pull our opponents apart. It’s the kind of goal that could be used in lectures to show how to create gaps in your opposition.

Some say it was the best game of the tournament. That’s not for me to say, but it is hard to disagree due to the technical quality, organisation and individual talent on both teams.

On one side: Kevin De Bruyne, Romelu Lukaku, Eden Hazard, Thibaut Courtois. On the other: Neymar, Marcelo, Fernandinho, Philippe Coutinho. There was incredible talent everywhere.

After about five minutes, we had to make an adjustment because they were already causing us problems. I told our right-back, Fagner, to stop attacking.

“Stay in position to deal with Hazard on the counter,” I told him. We needed an extra man back against their three dangerous forwards.

We played well and dominated the game, but Belgium were very good on the break. We went 2-0 down in the first half, but then pulled a goal back with 15 minutes to go.

We were the better team – even De Bruyne said so after the game – but we just couldn’t find the equaliser.

But it wasn’t to be, and we went out at the quarter-final stage.

I got very emotional when we arrived at the airport on our way back from Russia. At that point in time, the plan was for my coaching staff and I to leave, but fans were there to applaud us anyway.

"i believe that coaching brazil should be done in cycles of at least four years. i wanted to go to a copa américa"

That contact with the fans right after being knocked out was like a massage for the pain we were feeling. It was incredibly emotional.

I later got offered the chance to stay on in the job, and that experience with the fans was a huge part of the reason that I felt it was right to stay.

I also believe that coaching Brazil should be done in cycles of at least four years. I took over during a World Cup qualifying campaign, so I wanted to go to a Copa América.

So, I stayed on, meaning I had the chance to go one better than we did in Russia in a home Copa América in 2019.

And here we were, without Neymar, but we’d made it into the final (above).

Some people were expecting a 5-0 win against Peru. That was the score we’d beaten them by in the group stage, after all.

But I knew we couldn’t expect a repeat result.

I’d been sure to make sure we prepared properly. We had to have the right mentality. On this occasion we prepared really, really well.

"when richarlison scored to make it 3-1, i looked at the sky"

We went 1-0 up after 15 minutes, but Peru equalised. It was the first goal we’d conceded in the entire tournament and, to be honest, it surprised me.

I like to use the analogy of boxing. Conceding a goal is like taking a jab – you feel a bit dizzy and can’t attack straight away.

You have to wait to recover and find your feet again. Naturally, you are psychologically more vulnerable after conceding a goal. Your confidence levels drop. As a manager, you have to try to manage the transition between the two states of mind.

“What happened is in the past,” I tell my players after they concede. We let a goal in, but let’s move on. Try and get through the next few minutes so we can reset.

But here, in the final of the Copa América, my players had other ideas.

Under the pressure of Peru’s high press, we played out from the back, moved the ball around calmly, built a move, and went up the other end to score again (above).

I admit now that that level of resilience really did surprise me. I backed my team to win the match even after we’d conceded the equaliser. I thought our next goal would come, but I expected it to come later.

When Richarlison scored from the penalty spot to make it 3-1, I looked at the sky. There are defining moments when you feel the title is yours. You kind of feel it – and that was one of these moments.

The players’ celebrations; the celebrations on the bench, with everyone running towards the players on the pitch. In that moment, I felt immense pride. I was happy. I was grateful. I was thankful for this moment.

The Seleção has a successful history. In 1970, we had an extraordinary team – the best ever. When I travel overseas, people say: “Man, you deal with a lot of pressure!” And I say: “Yes. But I really believe that the main pressure is sticking to good moral values and trying to grow professionally.”

That’s the pressure I put on myself. Then, it’s about representing people who can identify with my values, behaviour and style. So representing them is not an obligation; it is a pleasure. I am proud to represent them.

I had really, really wanted to win the World Cup in 2018. If that had happened, I would have retired. There would have been nothing left to achieve.

But I’m glad I stayed on, so I had that moment after we won the Copa América. The final was my first game in charge of Brazil at the Maracana, and we lifted the trophy in front of 70,000 fans.

The supporters stayed in the stadium for a long time, celebrating with us. It’s hard to describe that feeling: celebrating a title with the fans.

I’m not sure how important that title was in the vastly successful history of the Seleção, but the fans were still part of it – and celebrating with them was an amazing feeling.

I’ve won nearly every trophy I have had the chance to compete for, but the World Cup still eludes me.

I hope she is right.