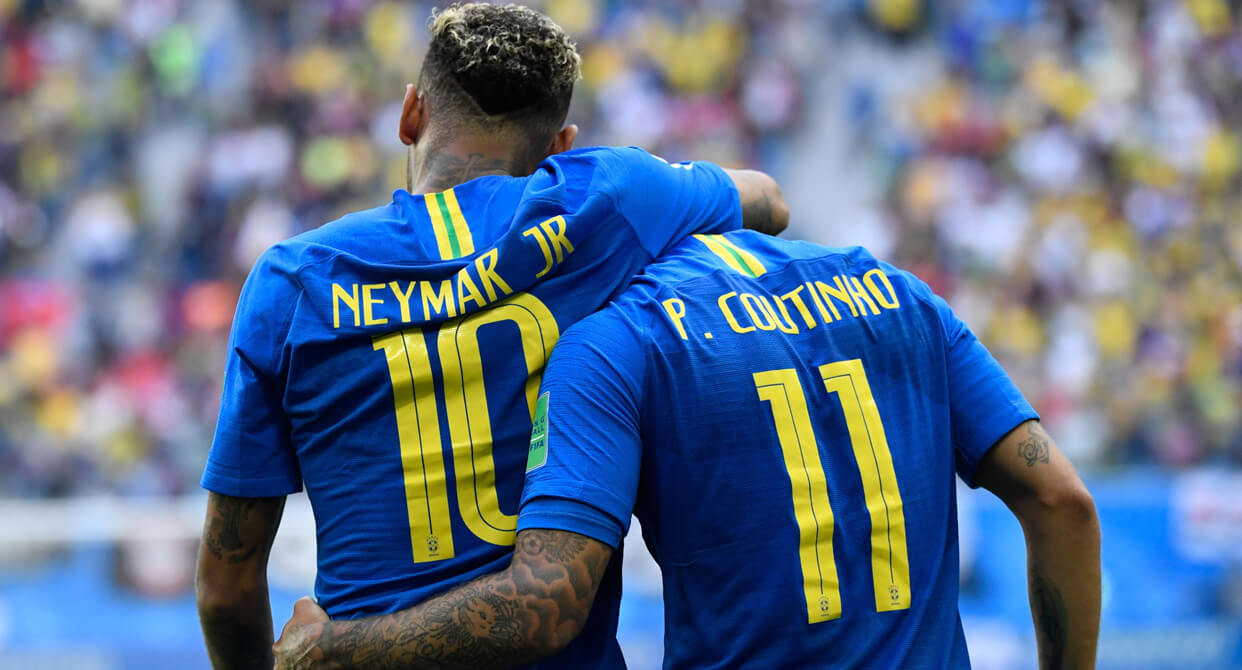 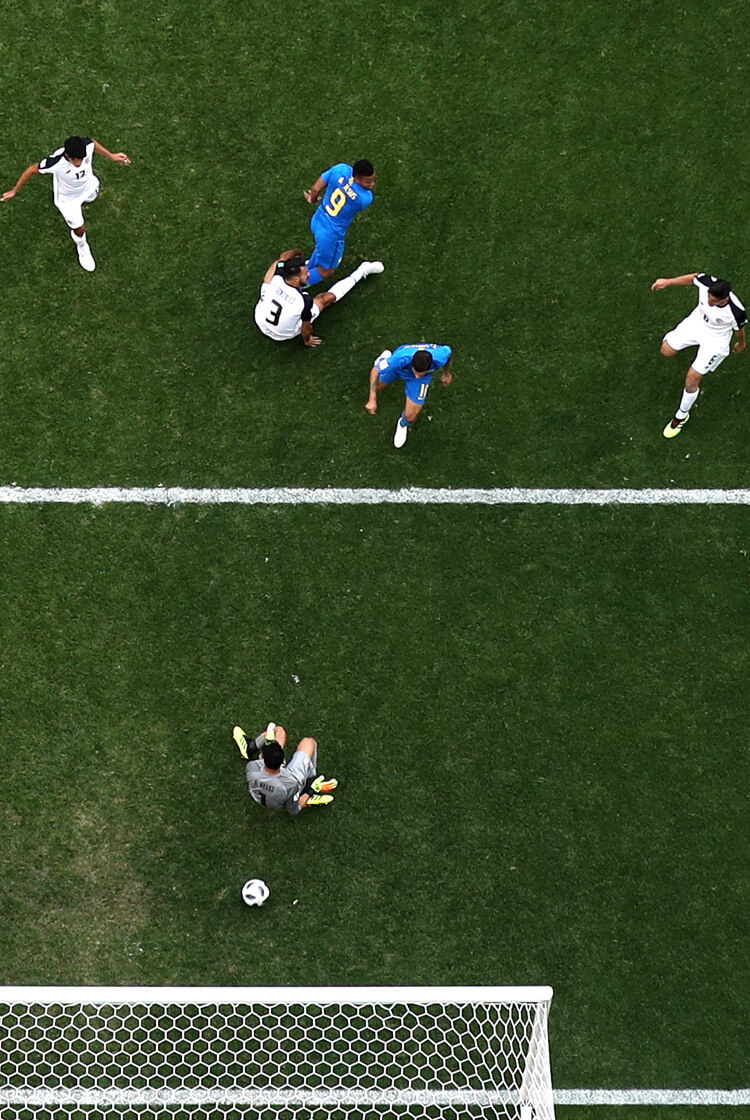 Philippe Coutinho and Neymar saved Brazil in stoppage time against Costa Rica, with a second consecutive draw of their 2018 World Cup finals looming. Tite’s team had dominated possession throughout, but had little to show for their efforts from another uninspiring display as full-time approached. But Coutinho poked the ball home in the 91st minute, before Neymar added a second with seconds remaining to secure a scoreline that flattered the Brazilians. Despite question marks remaining over their performance, they top Group E after two games – a draw against Serbia will send them through to the last 16. 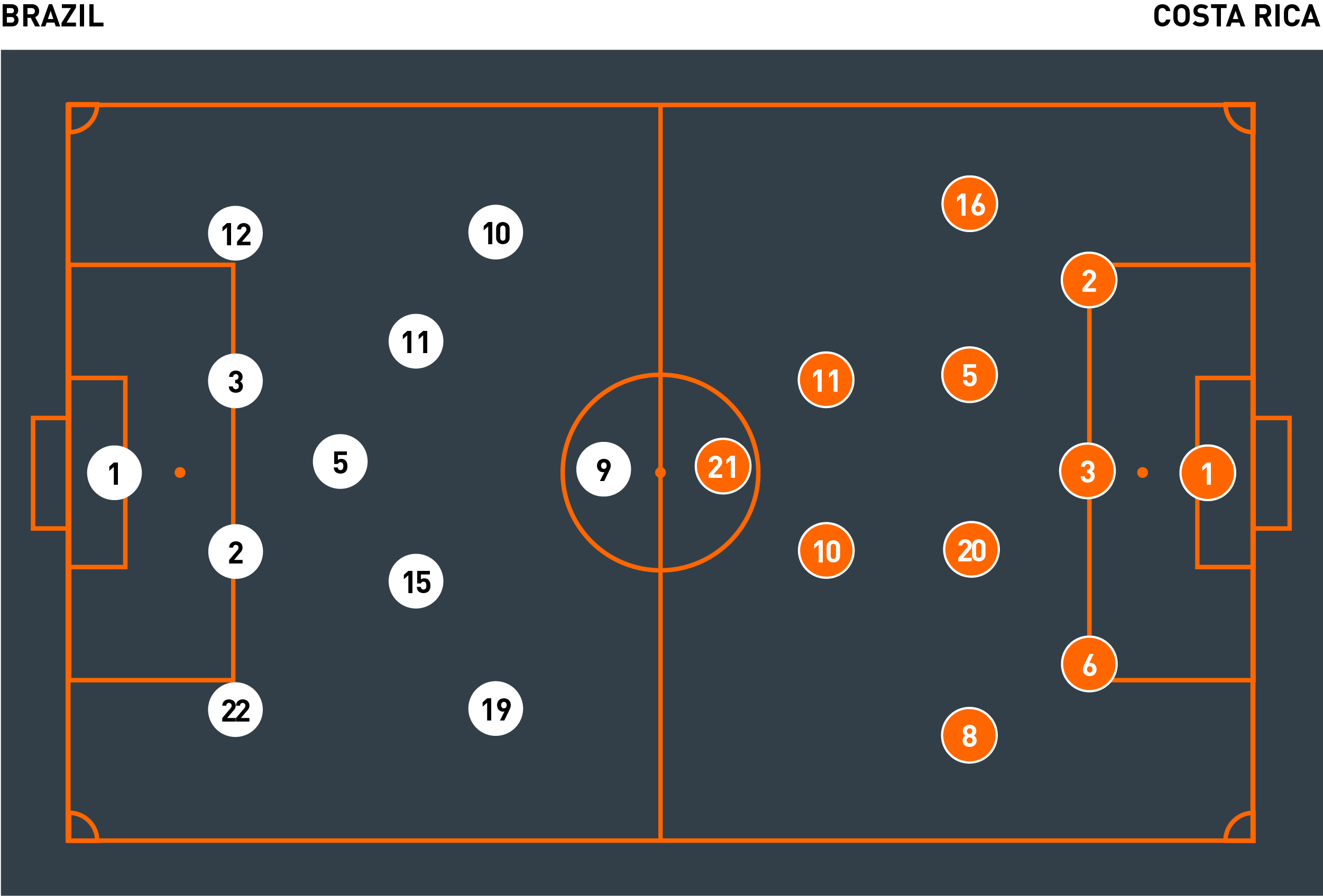 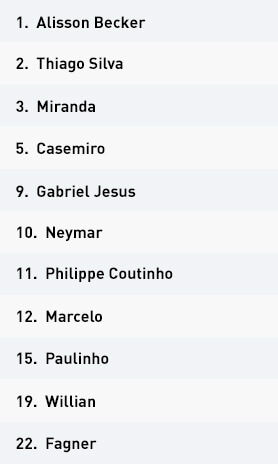 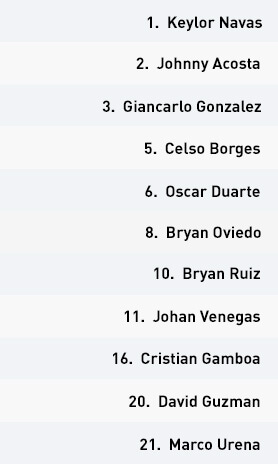 Brazil set up in a 4-3-3 in possession, with Philippe Coutinho and Paulinho playing centrally in front of Casemiro, while Neymar and Willian supported Gabriel Jesus from the wide areas.

Brazil had to demonstrate extreme patience against a Costa Rica side that played in a very compact and organised block. They tried a few different methods to try to create gaps within the block. This included dropping Coutinho or Paulinho in front of their opponents’ midfield line to try and entice them to press, but this didn’t have any effect. Neymar would occasionally make the same movement, usually bringing one opponent with him, but this also failed to create any real opportunities to penetrate.

Their best solution in the first half was to drop Jesus from the top line into an area between the lines and play the ball to his feet, while Neymar or Coutinho would run beyond him. These movements made the Costa Rica defence panic slightly, as they were unsure whether to follow Jesus or track the run of Neymar or Coutinho.

Douglas Costa came on for Willian to play on the right of the front three in the second half. He tended to stay wide with the intention of using his excellent one-on-one capabilities to beat players and get crosses in. This change – as well as Costa Rica’s decision to fall even deeper – meant that Marcelo pushed much further forward on the left, allowing Neymar to play more centrally.

Coutinho and Paulinho stopped coming deep to get on the ball. Instead, central defenders Thiago Silva and Miranda, along with Casemiro, would be in charge of looking to find the gaps, while Coutinho and Paulinho positioned themselves between the lines with Neymar. This essentially created a 4-1-4-1 in the second half.

Out of possession, Brazil were very strong. Their 70 per cent possession was not only a result of their ability to keep the ball, but also the intensity and quality with which they won it back in transition. Where Costa Rica had good possession, Brazil would set up in a 4-1-4-1 formation, with Casemiro between the two lines and wide attackers Neymar and Willian joining Coutinho and Paulinho to make a midfield four. There were also several occasions where Neymar would join Jesus in order to press the Costa Rica defenders higher and force them into an earlier, long pass.

Brazil’s counter-press was highly effective too, and they maintained this energy and intensity for the entire game. It was this relentless desire to win the ball back that led to Neymar’s goal after Costa Rica had been forced into an error in possession.

There is a potential weakness on the counter-attack if Brazil’s initial counter-press is either unsuccessful or not possible due to positioning at the moment of transition. It will, however, take a better side than Costa Rica to exploit it.

Costa Rica set up in a 5-2-3 formation in possession, with David Guzman and Celso Borges playing close together in central midfield, while Bryan Ruiz and Johan Venegas supported Marco Urena in attack.

This formation made it easier for Costa Rica to transition into their out-of-possession shape. Due to the intensity of Brazil’s press, they had very few opportunities to sustain any build-up of real quality. The first pass from Keylor Navas tended to go to one of the centre-backs, but the next pass would almost always go direct to one of the forwards.

Brazil had very little trouble in dealing with this, and Costa Rica appeared devoid of any other ideas – a comment justified by their zero shots on target. As the match progressed and they conceded possession and space to an even higher degree, the only fathomable option for them was the counter-attack, which they utilised on a few occasions.

The issue with this, however, was that they would need to commit bodies forward in order to beat the Brazil defence. In doing so, they inevitably left themselves vulnerable to a counter-attack themselves – as a result, these moments lacked the sufficient quality to create anything substantial.

Out of possession, Costa Rica were very organised and compact. They were set up in a 5-4-1 formation, where Bryan Oviedo and Cristian Gamboa played alongside the three centre-backs to make a back line of five. Venegas and Ruiz would drop in with Guzman and Borges, to make a midfield four behind Urena.

Costa Rica were happy for the Brazil centre-backs to have possession, and they were even happier for Philippe Coutinho and Paulinho to drop in front of them and receive the ball. They would remain unmoved, and even when they did press it was generally done with the intention of forcing mistakes rather than winning the ball; the pressing player would put the brakes on early so as not to be taken on.