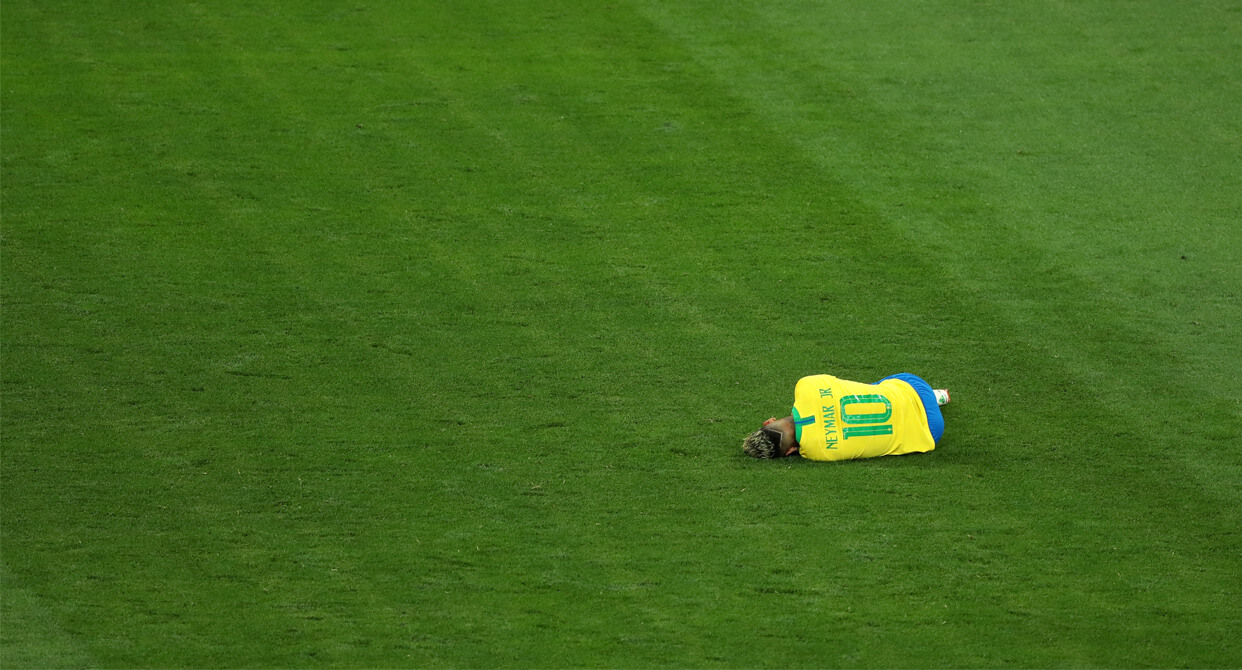 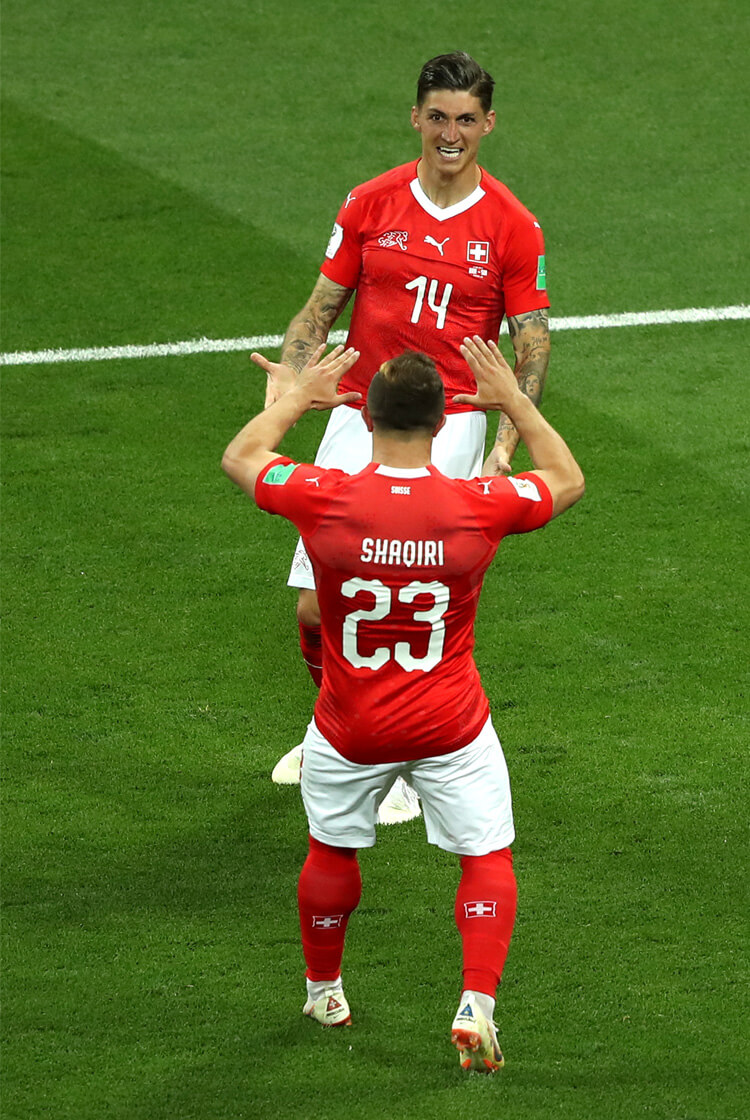 Switzerland held pre-tournament favourites Brazil to a draw in Group E at the 2018 World Cup finals. It’s been 40 years since Brazil failed to win their opening game of a World Cup, but the Swiss deserved their point. Barcelona midfielder Philippe Coutinho put Tite’s team ahead with a trademark curled finish in the 20th minute, but Steven Zuber responded with a header early in the second half and, despite fielding star man Neymar, Manchester City forward Gabriel Jesus and Liverpool’s Roberto Firmino, the five-time winners failed to create enough genuine chances to really threaten the well-marshalled Swiss goal. 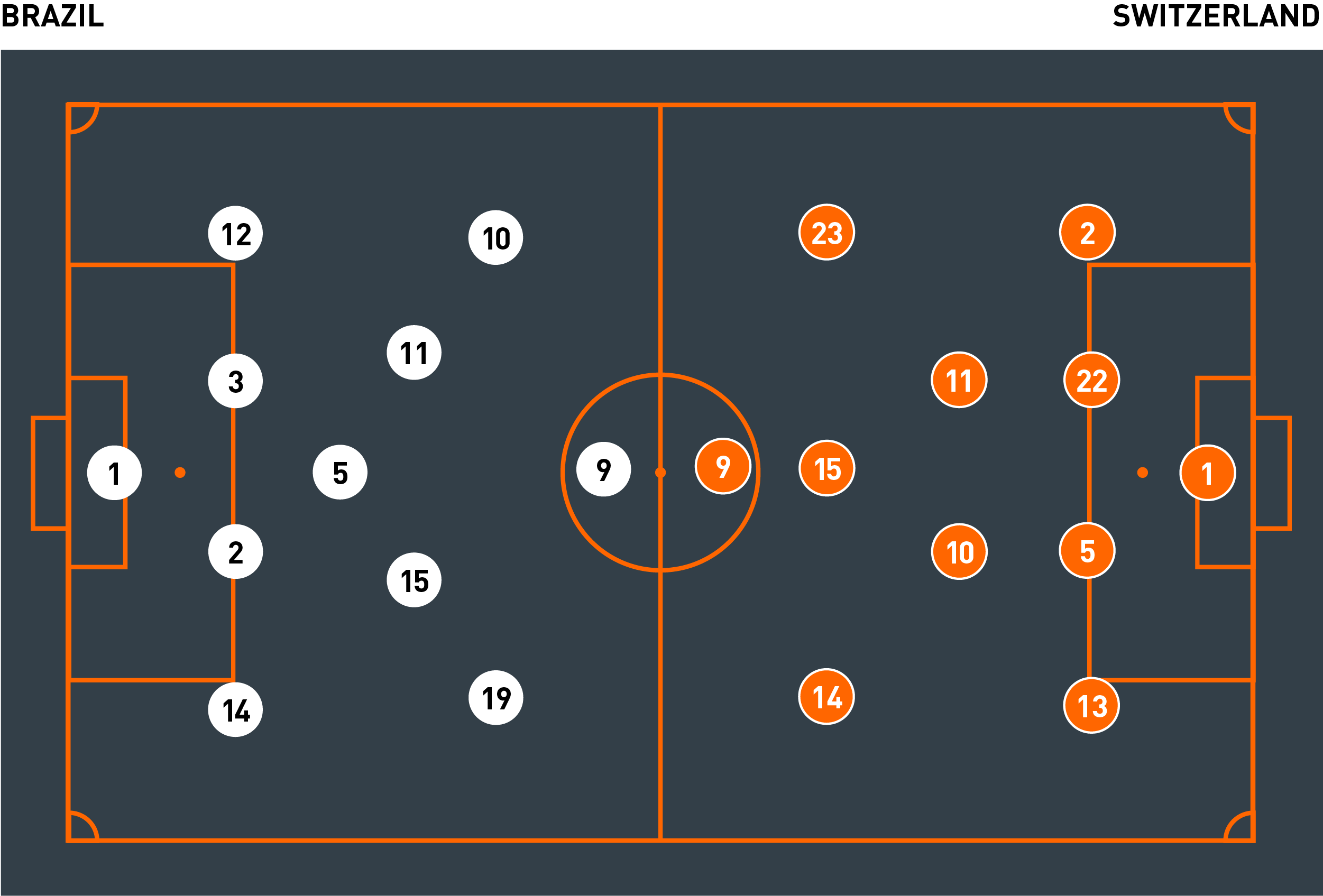 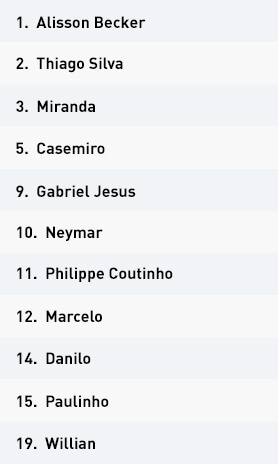 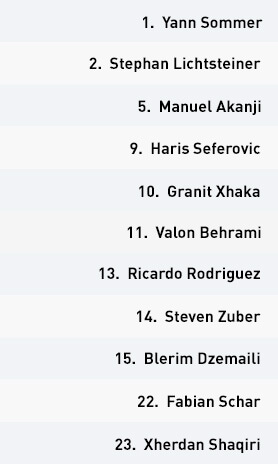 Brazil began the game in a 4-3-3 structure, with Philippe Coutinho looking to control the rhythm of the game from central midfield.

Initially, they looked to build using their left-sided trio of Neymar, Coutinho and Marcelo. Neymar would drift inside, looking to attack the space in between the Switzerland right-back and the closest centre-back. Coutinho would drop deeper, as he was an integral aspect of Brazil’s short build-up play, with Marcelo providing attacking width on the touchline.

Despite some early combinations, Brazil didn’t look to commit many players ahead of the ball, possibly wary of Switzerland on the counter. Their reserved approach restricted their opponents in possession, but limited their own attacks. Occasionally, Brazil would suddenly change up the tempo, with some fantastic one-touch patterns moving the ball at pace and Coutinho at the heart of the play.

Brazil’s first chance fell to Paulinho, whose ill-timed shot was well saved after a late run into the Switzerland penalty area. The move again stemmed from quick combinations along Brazil’s left, as Switzerland struggled to contain the fluid movements.

The Swiss began to nullify Neymar’s threat, as the midfield unit swarmed the wide forward each time he received the ball. Neymar was often forced back towards his own half, but soon found an escape plan. With the help of runs forward from Paulinho and Coutinho, Neymar’s disguised passing set the Brazil midfield away to attack with more numbers.

The opening goal for Brazil came from another flowing move again down the left, as Coutinho fired home a delightful effort from the edge of the penalty area. The ball curved into the far top corner, giving Yann Sommer in the Swiss goal no chance.

Surprisingly, Brazil lacked any form of tempo in the opening exchanges of the second half. They were lethargic in possession and grew frustrated with their lack of progress. In a similar fashion to the first half, they lacked numbers ahead of the ball and became predictable in attack – even down their more dangerous left side.

Marcelo’s forward runs became restricted, as his opposite number Shaqiri maintained a much higher position for the Swiss. Neymar – seemingly uninterested in helping out his left-sided teammate – also remained high for Brazil. This enabled the Swiss to transition into attack with much more room than previous. After the equaliser, Coutinho enjoyed a spell dictating possession, but he failed to drive Brazil forward in any meaningful way.

The introductions of Roberto Firmino and Renato Augusto briefly ignited the Brazilian spark, but they couldn’t create a single clear-cut chance on the Swiss goal. Neymar, Coutinho and Firmino all had chances late on, but they lacked real purpose. Central defender Miranda had the game’s final chance, as he shot wide after the ball landed at his feet from a corner.

Switzerland began in a 4-2-3-1 formation, which converted into a midfield five during prolonged periods of defending.

Valon Behrami was charged with nullifying the threat of Neymar, although to begin with the Brazilian talisman looked menacing on the left side. This didn’t last, however, as Behrami was defensively superb throughout – and not just with regards to Neymar. He provided the perfect protection for the defensive unit, also allowing defensive midfield partner Granit Xhaka to push the team forward with accurate passes over distance.

Despite some good periods of possession, Switzerland failed to link their central striker with the rest of the attack. At times, Haris Seferovic cut a lonely figure, as he desperately searched for balls to attack and link up with. His work rate couldn’t be questioned, but not having one single touch in the Brazil penalty area in the entire match is a testament to the lack of penetration from the Swiss midfield.

Throughout the second half, Switzerland looked much more comfortable in possession. Partly as a result of reduced performance from Brazil, the Swiss attacked in numbers as they searched for an equaliser. It eventually came from a routine corner, as midfielder Steven Zuber powerfully headed home from within the six-yard box.

The Swiss looked effective when transitioning down their right side, as Shaqiri remained in a much higher position than in the first half. This pinned back Marcelo, whose overlapping runs forward were few and far between.

Neymar’s unwillingness to track back provided Shaqiri with ample space to dribble and drive forward in attack. Veteran right-back and captain Stephan Lichtsteiner also moved forward and tried to provide deep crosses for the onrushing midfielders to attack.

In the end, Switzerland couldn’t grab a matchwinning second goal. Despite their efforts in the second half, Brazil eventually responded and the Swiss dropped into a mid/low defensive block. They defended in numbers, frustrating the Brazil attack for the remaining 10 minutes.

As the Brazilians could only muster half-chances, the Swiss looked comfortable both in and out of possession. The game fizzled out, and the Swiss deservedly held on to claim an invaluable point against the five-time world champions.