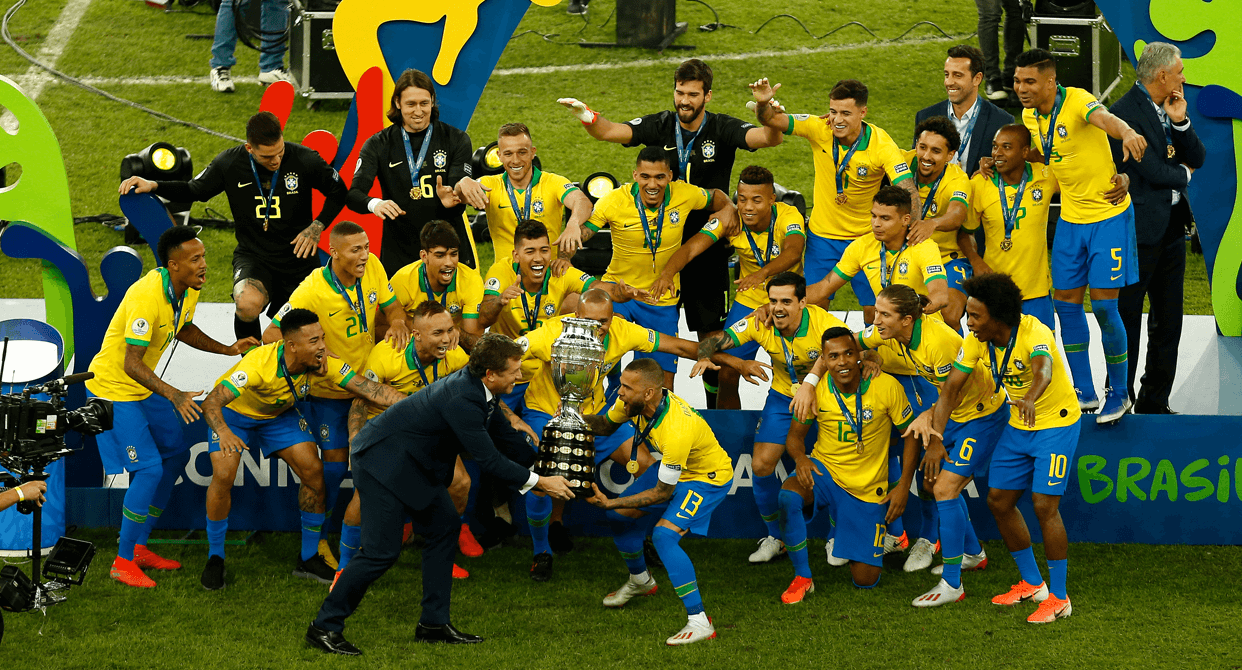 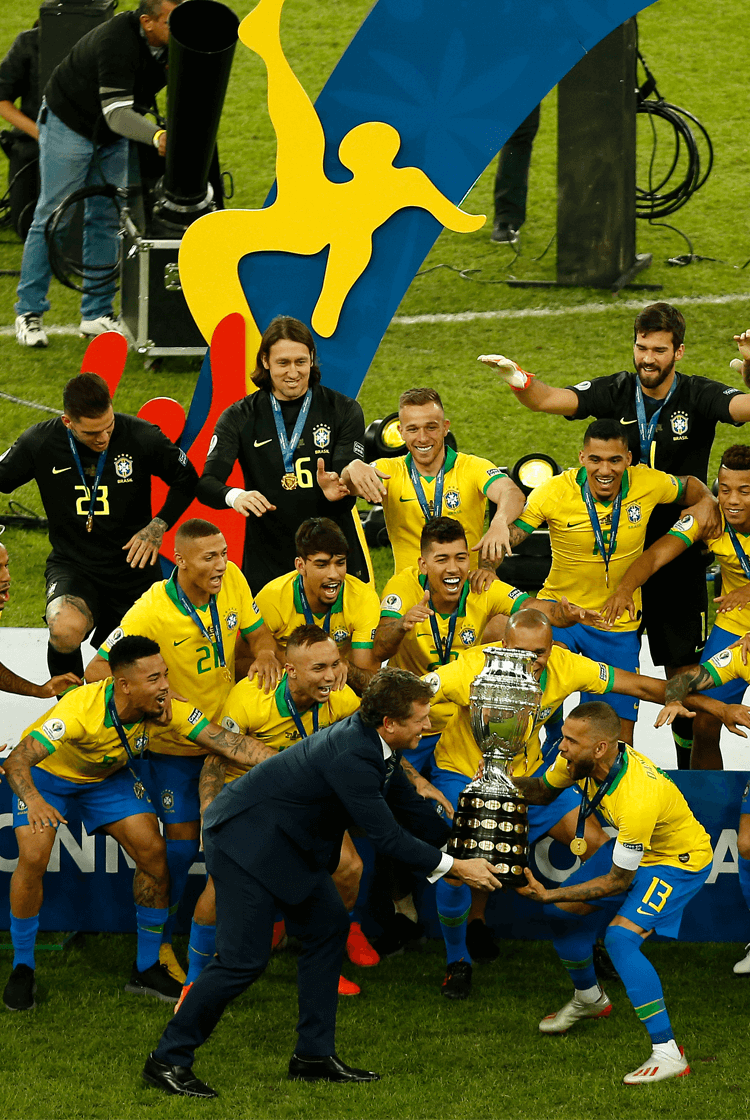 Brazil secured their ninth Copa America, and first tournament success since the 2016 Olympic Games, when they overcame the dismissal of Gabriel Jesus to defeat Peru 3-1 at the Maracana. Maintaining their record of winning the competition every time they have been hosts, the Seleção took the lead in the first half through Everton Soares and, after Paolo Guerrero had brought Peru level from the penalty spot, restored their lead in first-half stoppage time with a strike from Jesus. A second yellow card for the Manchester City forward with 20 minutes remaining added to the pressure on the favourites, but Richarlison added a third from the spot late on as Brazil won their first Copa America title for 12 years. 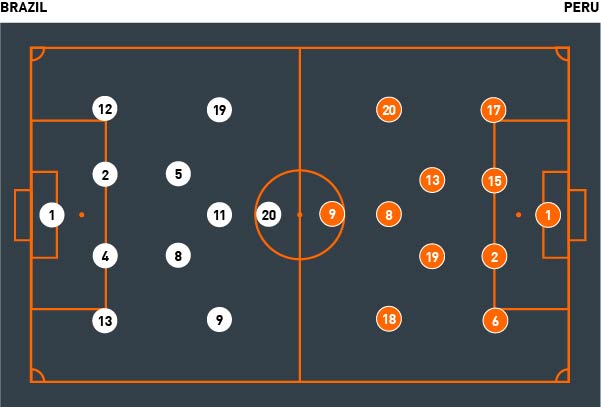 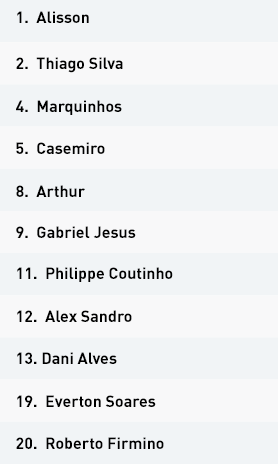 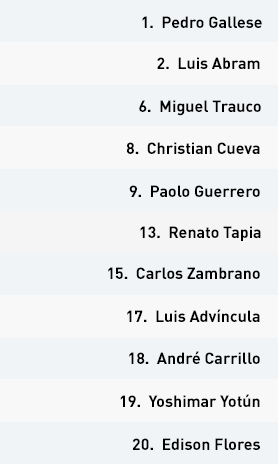 Brazil again started with a 4-2-3-1 formation while in possession, with Arthur and Casemiro as the two withdrawn central midfielders and Gabriel Jesus, Philippe Coutinho and Everton Soares as an attacking three supporting lone striker Roberto Firmino. They sought to play through Arthur and Casemiro, but Peru’s midfield allowed them minimal freedom; as a result, the midfield pair were increasingly and intelligently used as decoys during the early phases of build-ups.

If and when that tempted Peru’s midfield forward, greater space was left in front of their defence for the attacking four. Coutinho would also sometimes join Arthur in providing a decoy, creating potential one-on-ones in wide areas from which Jesus and Everton could attack Peru’s full-backs – as when the former crossed for the latter to open the scoring. When Jesus beat Miguel Trauco and crossed, Everton evaded Luis Advincula to finish past Pedro Gallese in the Peruvian goal.

Coutinho had further space to exploit in the second half and played with freedom, dropping into pockets to receive, turn and advance in possession, largely recreating the influence shown during his time at Liverpool. Peru occasionally attempted to man-mark him, but did so without success. When Christian Cueva pressed with Paolo Guerrero, Renato Tapia and Yoshimar Yotún were forced to join André Carrillo and Edison Flores in a midfield four, encouraging Coutinho to drop into the half-spaces, most commonly on the left, to receive from Arthur or Casemiro and bypass the Peruvian midfield.

Firmino also played intelligently, positioning himself by the furthest central defender and making runs across that forced him to follow. This created space for Coutinho to attack diagonally and combine with Jesus in two-on-one situations against left-back Trauco. Only the slow timing of release from Coutinho prevented them from capitalising.

Out of possession, Brazil’s 4-2-3-1 became a 4-1-4-1, as it did during their semi-final victory over Argentina. Casemiro withdrew to sit in front of the back four, while Arthur moved to join Coutinho as a more advanced central midfielder focusing on the potential threats posed by Yotún and Tapia. Firmino pressed Peru’s central defenders to force possession out wide, further limiting their opponents’ space. Brazil’s energy contributed to them committing 25 fouls – by way of comparison, the highest average of fouls per game in last season’s Premier League was Arsenal’s 12 – further disrupting Peru’s approach and allowing the Seleção to recover their defensive shape.

Jesus’ red card left Brazil to adopt a 4-4-1 shape out of possession, reducing the space between their defence and midfield and introducing the added energy of substitutes Richarlison and Eder Militao to continue working further up the pitch as they saw their victory out.

Peru set up in a 4-2-3-1 formation that was largely consistent both in and out of possession. Renato Tapia and Yoshimar Yotún patrolled the spaces in central midfield behind Edison Flores, André Carrillo and Christian Cueva, who assisted Paolo Guerrero with the press. Cueva and Yotún respectively man-marked Casemiro and Arthur, limiting their creative freedom. When Guerrero pressed Brazil’s central defenders Marquinhos and Thiago Silva, Tapia would push towards Casemiro, without man-marking him, to protect Peru’s defence against the risk of a four-on-four with Brazil’s attack. It was when they opted against pressing Brazil high that Carrillo, Cueva and Flores withdrew into a deeper block in what essentially became a 4-5-1.

While their intention was to play through their opponents, Roberto Firmino’s workrate as the first line of the press meant that Peru struggled to advance possession in the early stages, so they adapted by using rotation on the left, with Miguel Trauco, Yotún and Carrillo. Yotún’s withdrawal into the false full-back position between Abram and Trauco allowed the latter to advance and Carrillo to move inside; with Trauco then beyond Gabriel Jesus, Alex Sandro had to choose between following Carrillo inside or remaining wide to defend against the advancing Trauco.

During the first half they often succeeded with this approach, but in the second they sought to use the dribbling abilities of attacking individuals like Cueva to unlock the Brazilian defence. When an opponent is drawn to the dribbler, space opens elsewhere; Peru attempted to use that space to slide Guerrero in, but they were frustrated by Marquinhos and Thiago Silva convincingly defending the channels. In the end, they failed to beat Brazil goalkeeper Alisson beyond a first-half equaliser scored by Guerrero from the penalty spot.