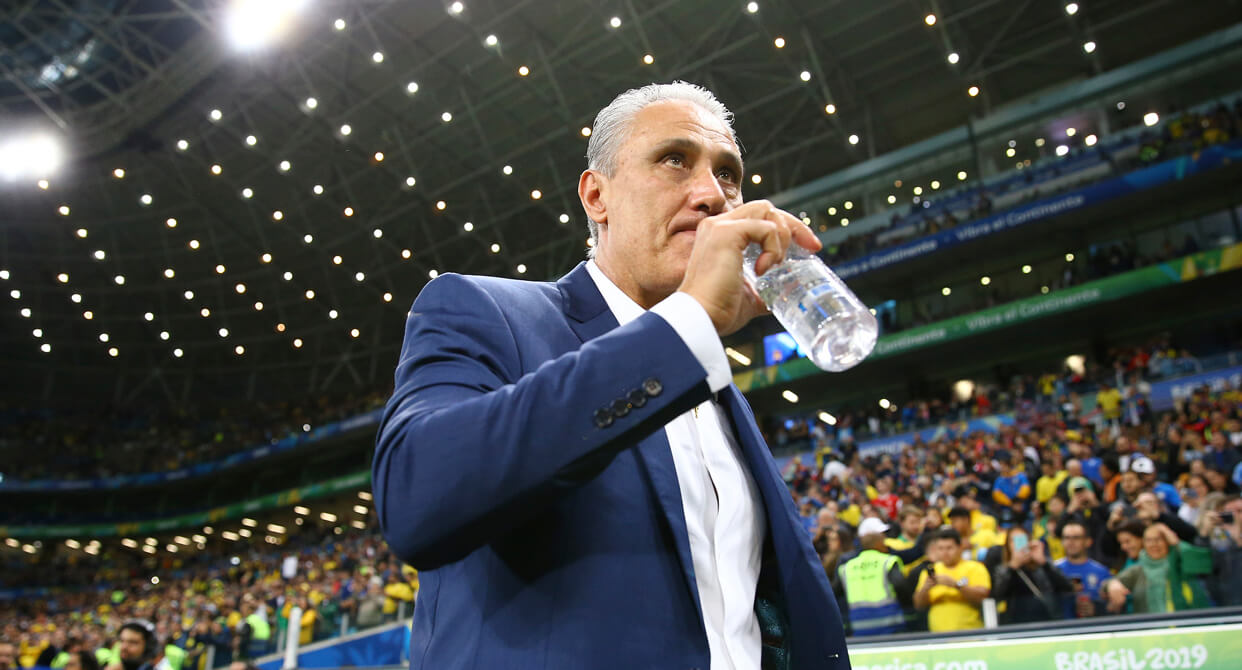 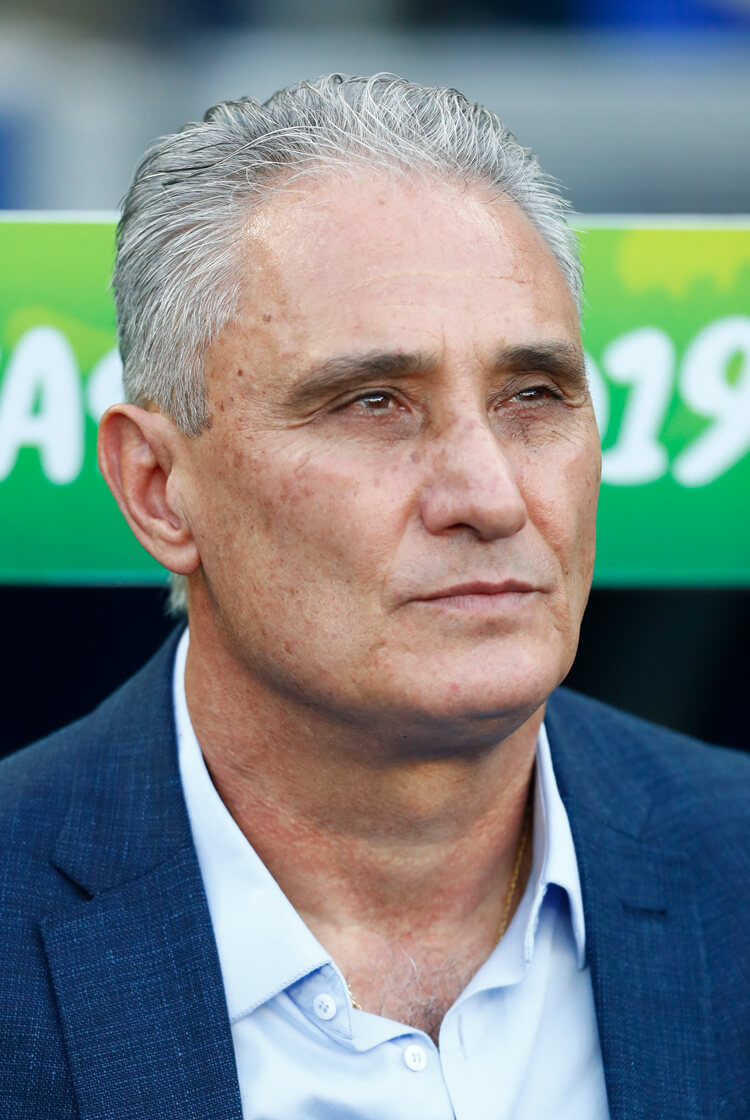 Profile
If Tite leads the Brazil national team into the 2022 World Cup, he will join Mario Zagallo and Tele Santana in a very select group of men to have coached the Seleção at consecutive World Cups. Brazilian football is not a place for long-term jobs, and many might have thought that the national team’s exit to Belgium in the quarter finals of the 2018 World Cup in Russia would spell the end of Tite’s reign.

The 58-year-old remains widely viewed as the best Brazilian coach of his generation, however. He also repaid the faith placed in him by leading Brazil to the Copa América title –their first in 12 years – on home soil in 2019.

Tite’s ability to keep a football team as organised and synchronised as an orchestra is what made him a winner at clubs including Gremio, Internacional and mostly famously Corinthians before he took the job with Brazil. In the second of his three spells with Corinthians, he won both the Copa Libertadores and the FIFA Club World Cup. The latter, earned with a 1-0 victory over Chelsea in 2012, remains the last time a South American club beat one from Europe in what represents a hugely symbolic fixture for a continent that sees itself as the true home of football.

Tite combines a tractable and friendly management style off the pitch with an astute tactical approach on it. His ability to convince a group to play in a meticulously organised way has long been recognised as one of his leading skills – everyone who plays must contribute.

He is also known for his commitment to studying the game. During a sabbatical from coaching in 2014, he watched and made copious notes on every single game at a World Cup held in his native Brazil – a tournament that ended so despairingly for the hosts at the hands of a ruthless Germany.

Later that year, he travelled to Spain to spend time with Carlo Ancelotti, who had recently won the Champions League with Real Madrid. Tite and Ancelotti exchanged training methods and game ideas, and the Brazilian returned home with ideas he implemented upon his return to Corinthians – and which led to another domestic title in 2015. It came as no surprise when, a year later, he was hired to replace Dunga as the head coach of the national team.

Playing style
Much of Tite’s success as a manager comes from the quality of his defensive systems. His early victories as a coach, including the 2001 Brazilian Cup with Gremio, were built on a defensive back three, but by the time he returned from a spell in the United Arab Emirates to take charge of Internacional in 2008 he had shifted to employing a back four.

At both Internacional and then Corinthians, he experimented with formations – 4-2-3-1, 4-3-1-2 and 4-4-2 – but all were built on a narrow and compact defensive line of four. Full-backs and central defenders must always play in the same rhythm, and always be in line – it was this approach that denied a young Neymar the spaces he so loves to attack in Corinthians’ Copa Libertadores semi-final victory over Santos in 2012 (below).

In possession, Tite favoured a simple attacking approach featuring frequent combinations between full-backs and wingers. In a 4-2-3-1 system, one central midfielder should maintain his positioning to protect the defence; the other was expected to make late runs to support the front line. At Corinthians, the latter role was often filled by future Tottenham midfielder Paulinho, who scored an important winner in the Copa Libertadores quarter-final tie against Vasco da Gama.

After his time away from coaching, and the aforementioned trip to see Ancelotti, Tite returned for his third spell at Corinthians as committed as ever to a defensive back four. Ahead of that, he shifted to a 4-1-4-1 shape with a single defensive midfielder and a line of four attacking midfielders in front of him. This shape also featured a ‘false 10’ on the right side of midfield, mirroring the way James Rodríguez was used for both Colombia and in his first season at Real. For this role, Tite looked to Jadson to start on the right side, but in possession come inside and combine with the likes of Renato Augusto, Elias, Malcom and Vágner Love. Those inside movements also created space for the right-back, most often Fagner, to join the attacks out wide.

The Seleção
The modern training methods and offensive mindset that Tite brought to Corinthians’ 2015 Brazilian championship win made him the obvious candidate to take the job with the national team after the failures of the 2014 World Cup and both 2015 and 2016 editions of the Copa América. The team’s early results under him only served to underline this; heading into the 2018 World Cup, the team had lost only once, in a friendly against Argentina.

Their impressive run was built on the same 4-1-4-1 formation, with a fast-paced circulation in possession based on triangular combinations. On the right, full-back Dani Alves combined with Willian and Paulinho; on the opposite side, left-back Marcelo attacked with Neymar and Renato Augusto (below). Centrally, Casemiro performed the same role for Brazil he did for Real – sitting in front of their central defence and covering any spaces exposed in defensive transition.

After a 4-1 World Cup qualifying win in Uruguay in March 2017, in which Paulinho scored a hat-trick, it looked like Tite had settled on his ideal midfield three: Casemiro sitting behind Renato Augusto on the left, and Paulinho. They combined intelligence and discipline, and understood the triangular patterns Tite preferred. Injury to Renato Augusto disrupted Tite’s preparations in the run-up to the World Cup, however. Philippe Coutinho, by now playing in a more central role for Barcelona, was one option, but there was another more defensive alternative.

In the 1-0 victory away in Germany in early 2018, Tite employed a much more rigid and narrow back four. The full-backs were much less offensive, Manchester City’s Fernandinho came into midfield and, in the absence of Neymar, Coutinho played as one of the wide attacking midfielders. Brazil had only 42 per cent possession, but won.

Unlike the injured Dani Alves, Renato Augusto made the squad for Russia, but he lacked the match fitness to start and his passing influence was missed. Against narrow and compact defensive systems, Tite adapted his team’s approach. Willian and Neymar remained wide (below), leaving Paulinho, Coutinho and central striker Gabriel Jesus to play between the lines.

The team had lots of possession, but struggled against solid defensive systems – they needed two late goals to beat Costa Rica in the group stage, and failed to convince against Mexico in the last 16. Despite having 58 per cent of possession against Belgium in the quarter finals, they went down to Fernandinho's own goal and Kevin De Bruyne's piledriver after a counter-attack that the suspended Casemiro may well have snuffed out. Renato Augusto’s late goal off the bench only served notice of how much his influence had been missed further forwards.

Copa adjustments
For the first Copa América to be staged in Brazil since 1989, Tite had to rethink his team. Doing so became even harder when Neymar was ruled out after picking up an ankle injury in a warm-up game against Qatar.

Retaining the same 4-1-4-1 shape, with Casemiro as the deepest-lying midfielder and Liverpool’s Roberto Firmino now as the preferred central striker, Tite could also make use of the returning Dani Alves. The captain would play as a regular right-back out of possession, but during periods of build-up he would move inside and operate almost as an authentic midfielder – not unlike the way Pep Guardiola has been known to use his full-backs, Philipp Lahm and Kyle Walker among them.

Dani Alves could now orchestrate attacking movements with Arthur or Coutinho (below), and connect passes with Firmino. The latter offered greater mobility, and created spaces in attack for Gabriel Jesus and Everton to attack from starting positions out wide.

It was a hit. Brazil won playing good football and conceding only one goal – to Peru, in a final they ultimately won 3-1. As a Copa América-winning coach, Tite’s reputation as a coach – already high – has been enhanced further. His next challenge is to develop his team still further – and to win the World Cup.

The challenge ahead
Question marks remain, most seriously over their central midfield. Tite speaks about a ritmista – a player to dictate the rhythm of his team’s play, but a role no one has been able to make their own in his team.

Arthur has been compared to Xavi and Andrés Iniesta for his skill and control, but he has not yet shown a natural instinct for occupying more attacking areas. Everton midfielder Allan and Lucas Paqueta of Lyon have both been tried, but are still to truly convince.

At the Copa América, Tite instead relied more on his full-backs to occupy central areas in possession and to open spaces through midfield with short passing combinations. With this approach, Dani Alves and whoever plays on the left would operate almost as box-to-box midfielders. The wide attackers – most likely Neymar and Gabriel Jesus – would stay wide, leaving Firmino and Coutinho to play between the lines.

Neymar’s propensity to make headlines off the pitch remains a wider concern, but there are also young players coming through. Atlético Madrid left-back Renan Lodi is 22, Everton is 24, and Real's Rodrygo and Vinícius Júnior are teenagers. At the other end of the age spectrum, can Dani Alves (below), who turned 37 in May, realistically see through his stated intention to lead them in 2022?

Tite has shown he is able to reorganise teams with little time. In five years across three spells at Corinthians, he tested at least five different systems. In one year at Internacional, he used two. In a few months at Palmeiras, he turned the club’s fortunes around by employing a 3-4-2-1 formation that got the best out of the 35-year-old Edmundo.

He is a coach who can reinvent both teams and, if necessary, himself. The only question that remains is whether he can lead the national team to what every Brazilian craves most – another World Cup.