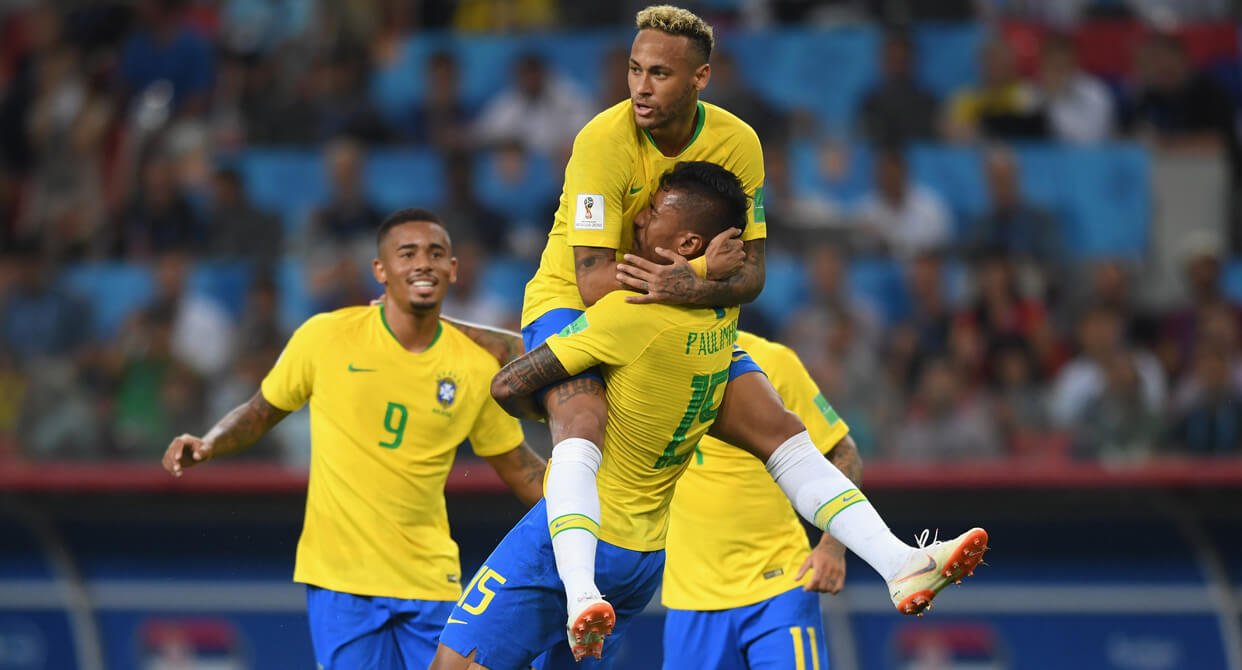 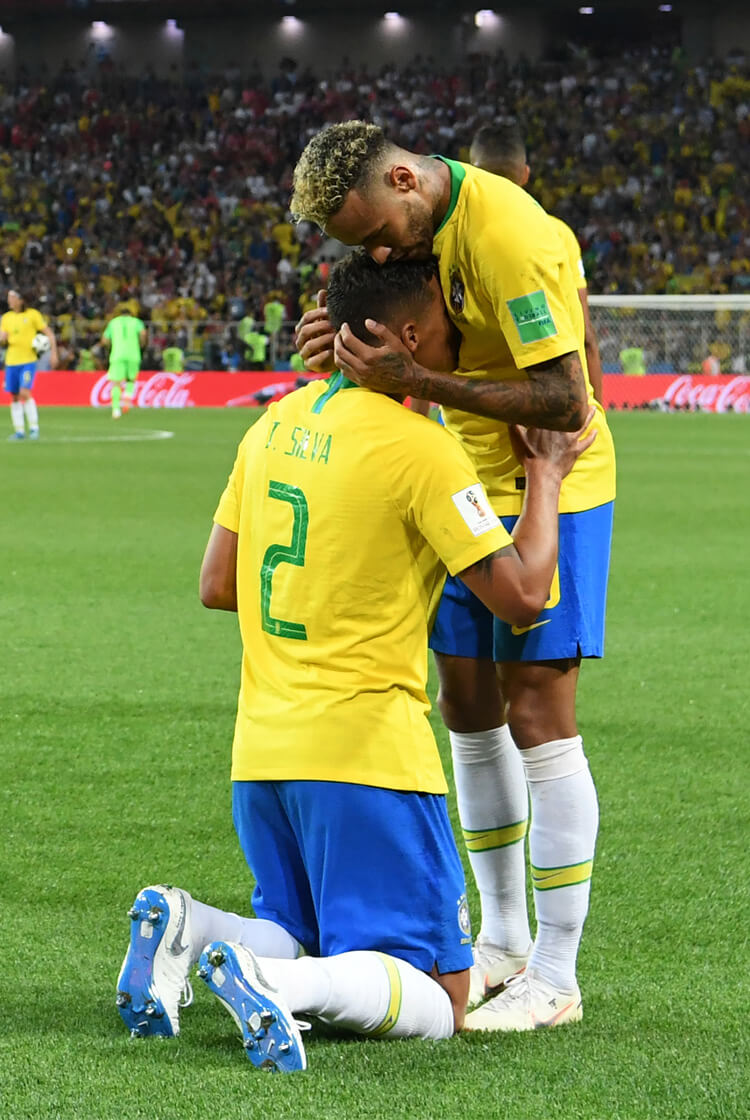 Brazil have yet to really get going at the 2018 World Cup tournament, but goals from Paulinho and and Thiago Silva secured the Selecao this 2-0 win over Serbia, top spot in Group E and a last-16 tie against Mexico. A perfectly timed run from Paulinho saw the Barcelona midfielder latch on to Philippe Coutinho’s ball over the defence to open the scoring late in the first half, while a second-half header from Paris Saint-Germain’s Thiago Silva – powering home from a corner taken by club teammate Neymar – ultimately settled the contest. Serbia weren’t without their threat, but Aleksandar Mitrovic couldn’t take his team’s best chances and they were duly eliminated. 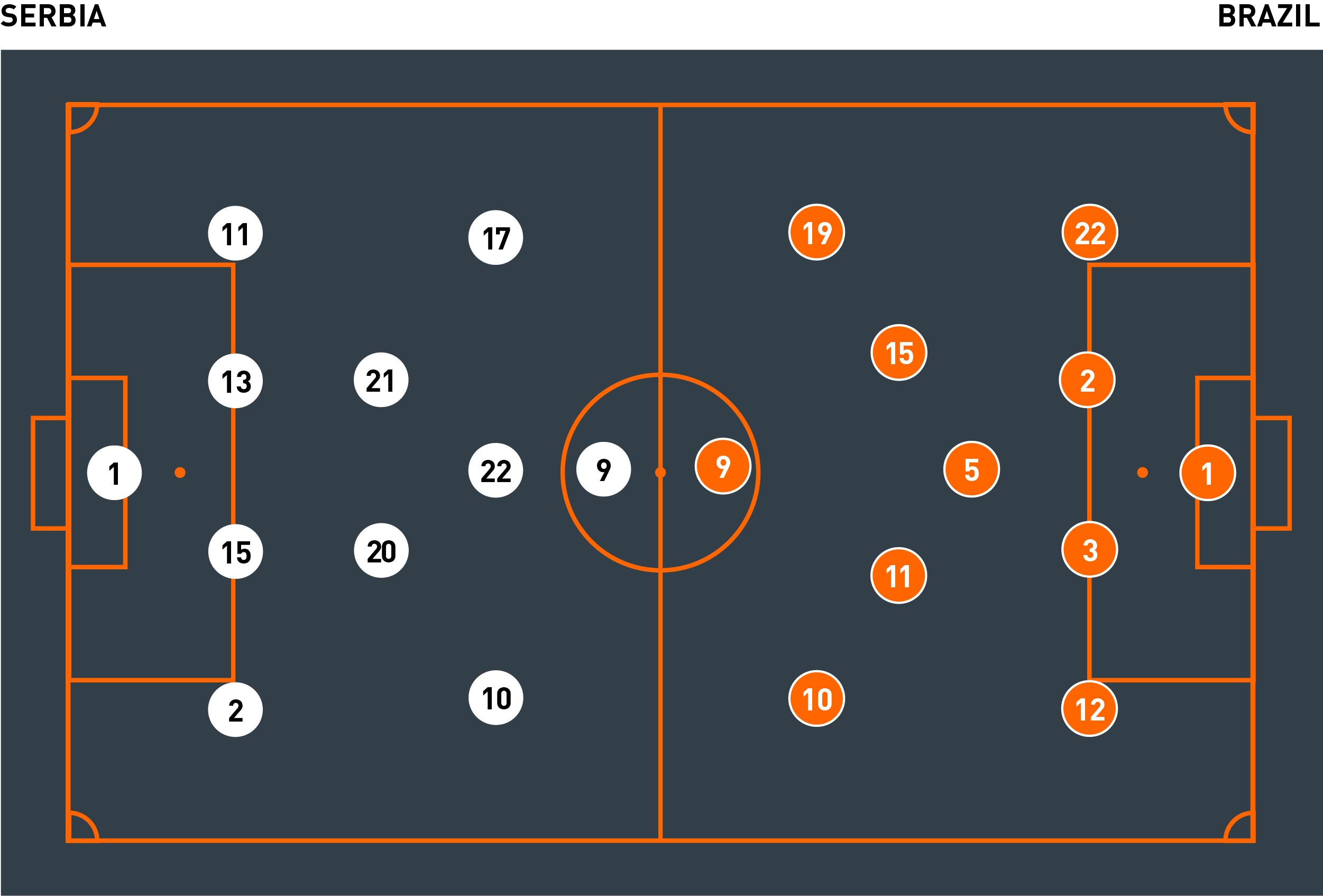 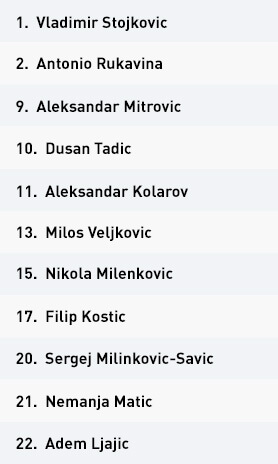 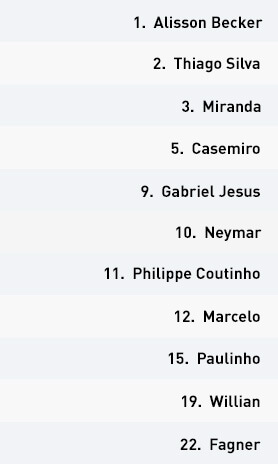 Serbia maintained the same 4-2-3-1 structure from their dramatic defeat to Switzerland. Milos Veljkovic came in to replace Dusko Tosic in central defence, as Sergej Milinkovic-Savic moved from the number 10 role into central midfield. Adem Ljajic started as the playmaker, looking to link with lone central striker Aleksandar Mitrovic in the central lane.

Serbia had little possession in the opening exchanges and searched for Dusan Tadic where possible. Tadic’s positioning began extremely wide on the right side, as he looked to cross early into Mitrovic. Their defensive line was susceptible to clips over the top, as their slow-turning defence failed to adjust to the quick movements of Gabriel Jesus and Neymar. Balls from the channels directed back into the central lane caused the most problems for Serbia. They struggled to maintain equal distances between their full-backs and central defenders – and well-timed runs from Brazil’s front line and midfield eventually led to Paulinho giving them the lead.

Tadic, Serbia’s main creative threat, could have potentially created more from the Serbian left, as he was hindered by the Brazilian focus on their own left. The former Southampton man was eventually required to provide more defensive work against the threat of Neymar, Philippe Coutinho and substitute Filipe Luis, an early replacement for the struggling Marcelo. Brazil’s right is much weaker, both offensively and defensively. Had Tadic less defensive work to fulfil, he could have fired in more crosses for Mitrovic to attack.

Despite their lack of attacking presence, signs of progress were being made by Serbia as half-time approached, particularly on the counter-attack. They grew into the second half and started the better in terms of both possession and attacking intent. With Neymar not tracking back, right-back Antonio Rukavina was able to rampage forward, with Filipe Luis unable to stop the barrage of attacking crosses. However, a distinct lack of quality pass choices reduced their threat.

Mitrovic cut an isolated figure for the majority of the game, as he regularly complained of a lack of service, specifically regarding aerial crosses. The Newcastle United striker seemed disinterested in any low deliveries into the box, as Serbia’s dominant period eventually began to fade.

The movements of Tadic briefly become an issue for Brazil. With Rukavina now providing attacking width on the right – and Neymar still not tracking back – Tadic was free to move into central positions, overloading Casemiro along with teammate Adem Ljajic. Brazil soon responded, however, by taking off Paulinho, and adding Manchester City’s Fernandinho to nullify Serbia’s midfield rotations. The Serbian threat soon dropped, and Thiago Silva soon headed home a second for Brazil.

This second goal killed off any Serbian momentum, which was most evident during their midfield pressing. Beforehand, they were aggressive and worked in units to block Brazil’s access forward. However, once the second goal went in, their intensity disappeared, with only individuals pressing the Brazilian ball-carrier.

Brazil expertly killed the game, with Serbia struggling to regain periods of possession. Serbia eventually succumbed to defeat and elimination from the tournament. Despite admirable performances against Switzerland and Brazil, they ultimately lacked the killer instinct to turn their chances into goals.

Five-time champions Brazil looked to secure their position in the knockout stages, knowing a win would send them through. They began in their familiar 4-3-3 shape, and remained unchanged from the starting line-up that beat Costa Rica in their previous group game.

Tite’s team began the match with tempo and flair, as so many Brazil teams have demonstrated over past World Cup tournaments. Philippe Coutinho moved much higher within the left inside channel, as Neymar initially dropped short to receive from the back line and then float across to the centre of the pitch to drive at the Serbian defence. With Neymar roaming and Coutinho ticking, Gabriel Jesus made multiple curved runs out towards the left side to re-establish attacking balance. Jesus was put through in only the third minute, but his shot was saved by a charging Vladimir Stojkovic in the Serbian goal.

Marcelo withdrew from proceedings before the 10th minute, evidently struggling but with no clear problem, and was replaced by Filipe Luis at left-back. On the right side, meanwhile, Brazil lacked meaningful attacks, as Willian’s body shape rarely enabled him to attack his marker. Repeated sets back to Fagner at right-back halted any progress, and Brazil soon prioritised their left flank.

They struggled to break a solid defensive block, as their slow build allowed Serbia to recover during defensive transitions. But they eventually broke the deadlock through a superb dinked finish from midfielder Paulinho, who had timed his run perfectly. Serbia gave Coutinho far too much time on the ball, and he found his Barcelona teammate with a simple yet accurate pass over the defence.

Neymar and Jesus continued to combine and create chances, however, as the former’s deeper position lured Serbia right-back Antonio Rukavina high. This provided the ideal gap for Jesus to bend his forward runs and penetrate in behind.

It took until the 51st minute for Willian to provide his first real attacking intent. A rapid shift and cross looked destined to be finished, but the Brazil front line couldn’t connect as Serbia cleared. Brazil’s left, meanwhile, was lacking the width and attacking threat that Marcelo offers. Filipe Luis rarely overlapped, meaning Neymar’s potentially destructive dribbling was limited by his being double-marked. Without a teammate overlapping to take away a marker, Neymar’s impact was reduced.

This killed any additional momentum from their opponents, as Brazil scored just as Serbia were at their most dangerous. For the remaining 20 minutes, Brazil demonstrated their top-level experience by strategically running down the clock with lengthy periods of secure possession. They kept numbers behind the ball, allowing Neymar a free run to attack along the left side, as Brazil now had two defensive midfielders to cover for their number 10’s lack of defensive input. They eventually secured the victory with a professional performance.