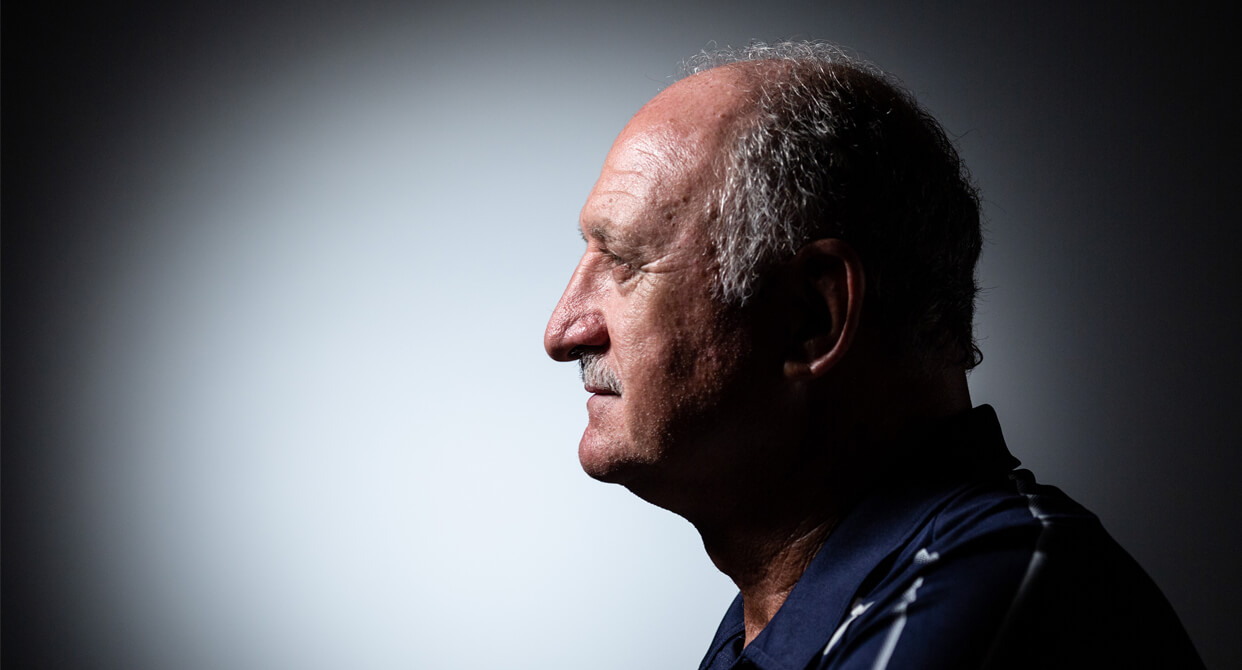 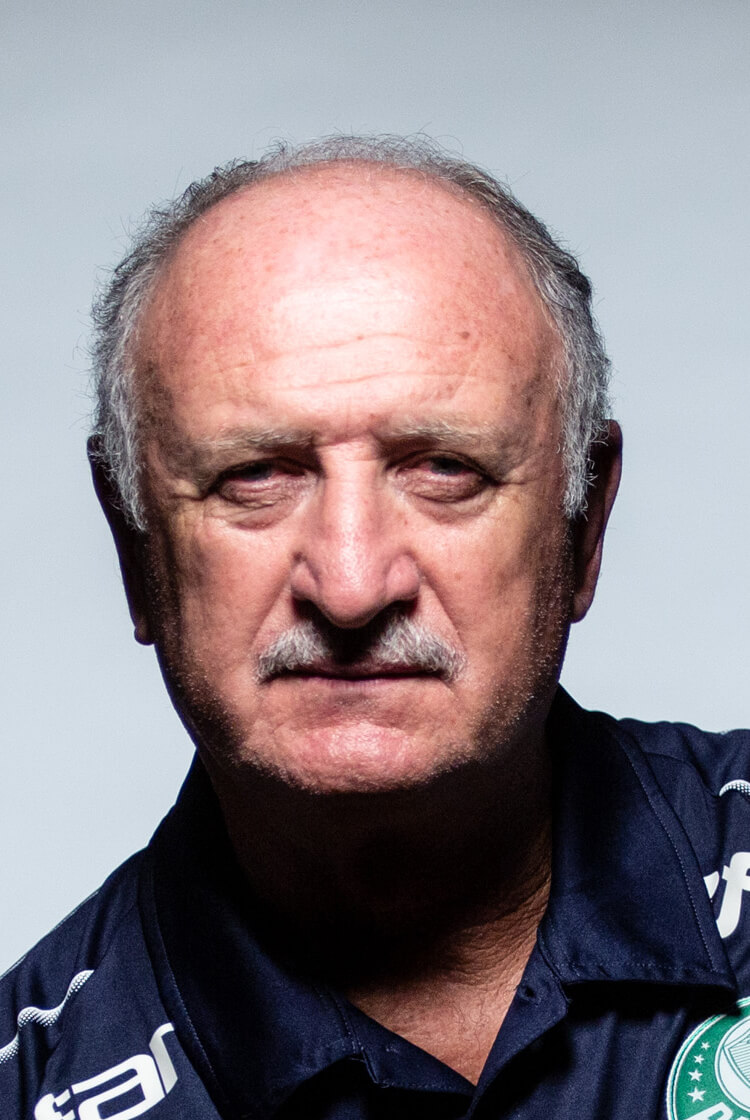 I always try to find the positives from each moment.

Even the worst ones.

I want to learn from them in order to do something different next time.

There will always be moments when you feel discouraged. Moments, like losing in tournaments at home, which I experienced with Portugal at the 2004 Euros and Brazil at the 2014 World Cup. Or even being beaten in the Copa Libertadores here in South America.

But life moves on. You try to learn from your mistakes, even if you don’t talk about it in public. You set new goals.

And then you look forward to the next challenge.

When it comes to doing that, I have always followed my instincts. Looking back, it has always proved to be the right call. I have worked in seven different countries, managed top clubs and big national teams. I like to think I’m respected around the world.

So that is my advice to everyone – follow your instinct. Move forward. Don’t ever say “I’m not doing it” or “I’m lost”. We all find ourselves in difficult situations sometimes, but we must find solutions and move on.

I’m proud of everything I have done in football, from the early days of my playing career, when I was 18 years old, to the present. I don’t like to think that I could have done better, because I’m aware of my limitations.

At the age of 70, I’m a fulfilled person. Pleased with my achievements.

There have been great victories, big trophies and good working environments. So many good things, it would be impossible to mention a specific moment as being the most special.

Of course, winning the World Cup with Brazil was a great achievement, but there have been many other special moments. For example, the first steps to becoming a football manager were also very important to me.

"I chose Rivaldo, a guy who doesn’t even say good morning when he gets up"

I was still a footballer, playing for Caxias, when I realised I would like to follow this path. At the time, I was also studying a course in physical education that specialised in football. So both at the club and in my work outside of it, I started to prepare myself to become a football manager.

Over the years that followed, I had two main idols as football coaches. First was Sergio Moacir Torres Nunes – a manager from Rio Grande do Sul, which is Brazil’s southernmost state. He was a very genuine and straightforward man.

The other is the ‘Captain’, Carlos Benevenuto Froner, who I worked with in the late days of my playing career. Therefore, I was able to understand some of his ideas, and his personality too. He naturally created a friendly environment protecting his players. The way he treated us was special; he was almost a father figure to all of us.

These are the two coaches who I admired most. The two whose steps I tried to follow when I became a coach myself.

By the time I first took charge of Brazil in 2001, I had been coaching for almost 20 years.

When I arrived, we were struggling to qualify for the World Cup – but one year later, we left Japan as world champions.

There are so many decisions you have to make at tournaments like a World Cup. Important decisions. Sometimes, these are made during matches; at other times, they have to be made in between games. But if I had to pick out one specific good call from that year, I would mention one that was made before the tournament even started – the choice of which players to take to the World Cup.

That was the best decision, and for several reasons. We experienced some situations during the competition that proved I was right to have chosen the squad I did.

You probably remember that, the day before our first match of the tournament, we lost our captain, Emerson, with a shoulder injury. Straight away, I asked Regina Brandao, our team psychologist at the time, what I could do. She said: “Felipe, at this time you should share the leadership of the Seleção among three, four or five players. Make them understand how it should be. And I believe you will be well represented.”

So that’s what I did.

I chose Cafu, a wonderful leader and a very honest person who had a natural influence in the squad. I chose Roque Junior, someone I had worked with at Palmeiras; he was a key player in our defence. Roberto Carlos, too – a guy who speaks more than the world. He was talking here, there, everywhere, so when something must be said, we looked to Roberto. Then I chose Rivaldo – a guy who doesn't even say good morning when he gets up. He is quiet, calm.

And there was a fifth... ah, yes, Ronaldo. Another type of leadership.

What did I tell them? “Rivaldo, you are my technical reference. Roberto Carlos, you're the spoken leader – you talk, you scream. Cafu is the overall leader. Roque, you lead the defence. Ronaldo, you are one of my leaders because you are the ideal man in attack. And you have experience in European football.”

It worked perfectly. Everyone understood their roles. And all of them had an influence in some important decisions before the final against Germany.

It was not until a few years later that my links with England started.

At first, it was just discussions. On two occasions, I met with the FA to talk about the national job. But at the time I was the head coach of Portugal, and we were about to play a World Cup – a tournament that England were also involved in. We could even meet them during the knockout stages – exactly as eventually happened.

But they didn’t understand my point. They wanted an immediate answer. So, I said: “No. I’m not going. I have a contract with Portugal and I can’t accept the offer now.”

Some English journalists who went to cover Portugal thought that it wasn’t right to decline England’s offer. But I didn’t decline the job. It was all about the situation.

"It’s about welcoming your colleague. They must understand that we are rivals on the pitch, but never off it"

Of course, two years later I did arrive in England... as manager of Chelsea.

It was only a short stay. Why? Because I was very truthful. I was honest with everything we had agreed. We agreed that players would do their recoveries at the club – that any surgery would be done, if possible, in London, as well as other several details that were not fulfilled.

Then I had some issues with one or another player. I was just trying to take care of their future.

So, we couldn’t build the environment I need to lead a team. A calm, correct and friendly environment for all.

In every job I do, I try to be as truthful as possible. I want my players to feel in our dialogues that what I say is my truth. Perhaps not everyone would agree with my truth, but it is mine and I would like it to happen.

I think this is the best manner to deal with people, to lead a group. That’s how we build empathy and a very good environment.

Although I was not there for long, it was in England that I experienced one of the most beautiful things in football – the respect for and from everyone. I had invitations from rival coaches to come to their houses before or after a match so we could talk about football, about life.

It was an experience that taught me to respect my colleagues even more than I already did. From the kick-off to the last whistle, it’s important to appreciate the managers of the other teams.

From then on, wherever I went, I did the same. It’s all about welcoming your colleague. They must understand that we are rivals on the pitch, but never off it.

Furthermore, living in London was wonderful. It’s a spectacular city, a special place to live in – as I did for almost a year.

I also learned how the fans have affection for their local clubs. We would play in the countryside, and the stadium would be packed with local supporters. They really support the club of their city. They don’t all support Liverpool, Chelsea or Manchester United. No, no. They support the team of their city.

This is beautiful, and I will never forget it.

"I used to observe Sir Alex’s manner, and tried to study his methodology. I still use it now"

Perhaps I would work in Europe again at some point. Why not?

At 70 years old, it’s a bit more difficult – the clubs and national teams are looking for younger professionals with a different approach, but perhaps I could do another function for them.

I don’t consider myself old. I still want to work for much more time.

I learnt how to do that from Sir Alex Ferguson (below). You know, I’m a disciple of his, and we had a nice relationship. We were in touch when Cristiano Ronaldo was coming to play for the national team, and Sir Alex was Manchester United’s coach. And then again, during my time at Chelsea.

I used to observe his manner. I tried to study his methodology, and I still use it nowadays.

It taught me to delegate more to the people who work with me. They can conduct things until a certain point, where I come to action. I believe that I do now something similar to what Ferguson did at Manchester United with Carlos Queiroz.

So, I keep working. I don’t see myself as useless. I see myself as someone capable of sharing my knowledge with those who are 30, 35 or 40 years old. They might be full of energy, but they do not have my experience.

I tell my players that they should always aim for good contracts. Every day is a different day. If you didn’t accept an opportunity today, you can always change your mind tomorrow.

In two years’ time, we can change our minds about what we think today and move to another place. This is what I say to my players.

In my case, it’s a bit more complicated. But, like I said, I’m still capable of doing things.

So I will continue to follow my instinct. It is the one thing I advise everyone to do, and I will always follow it myself.

Because, so far, it has served me very well.