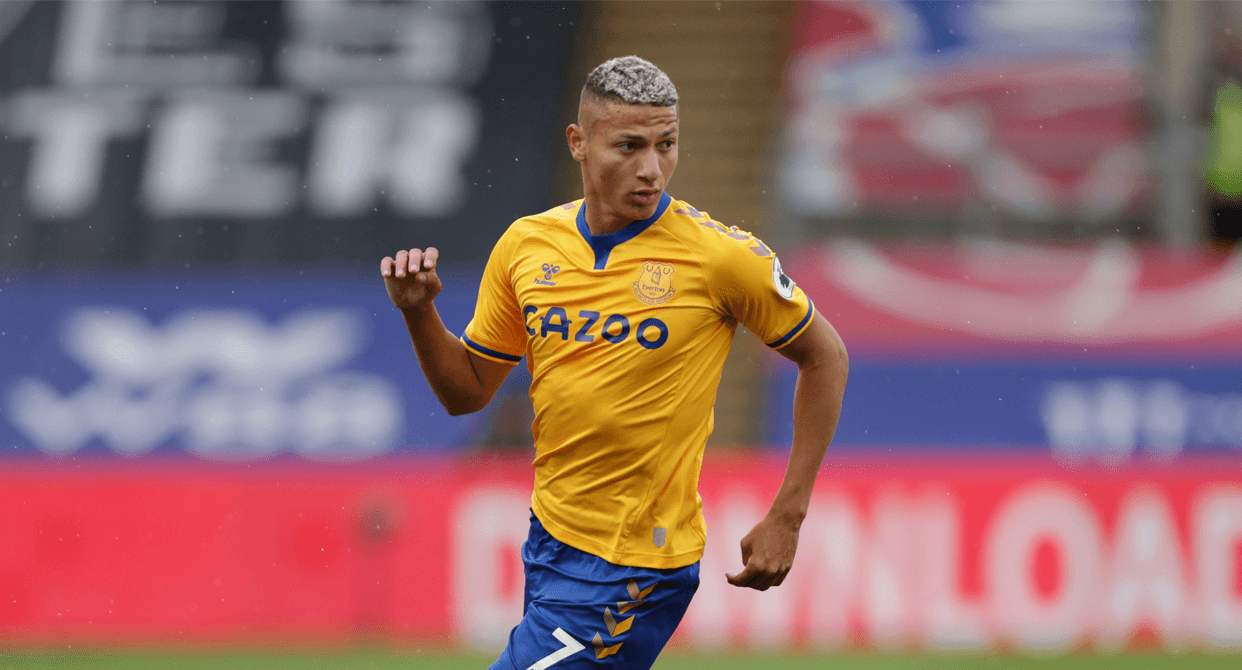 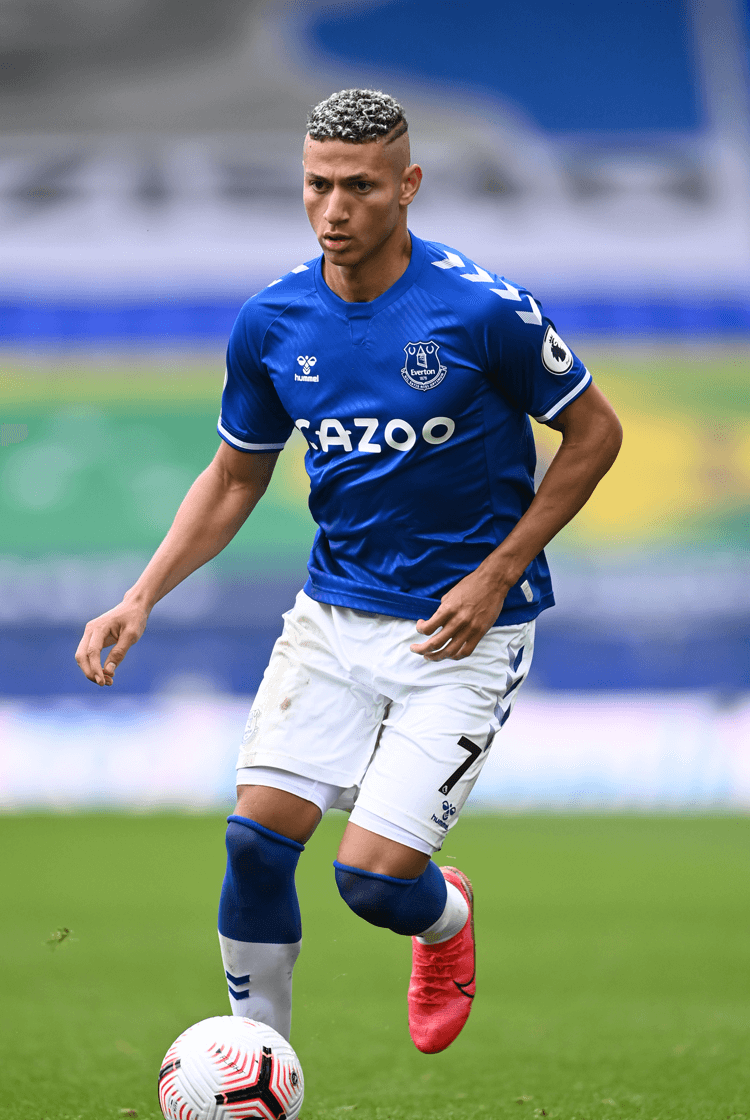 Profile
The £50m Everton paid Watford for the 21-year-old Richarlison in July 2018 raised eyebrows after an inconsistent period at Vicarage Road, but the Brazilian has been far more reliable on Merseyside and is fulfilling his undoubted potential. It was Marco Silva who took Richarlison to Goodison Park, in the same way he brought him to Watford, but the forward has since proved an important part of Carlo Ancelotti’s plans.

The Italian overhauled Everton's team in the summer of 2020 with the signings of James Rodríguez, Allan and Abdoulaye Doucouré – another signed from Watford – and although Richarlison was key throughout the first year of Ancelotti’s reign, raised standards at Everton mean there is more pressure on the Brazilian. “This season 20 goals is the minimum, but I expect even more from him,” Ancelotti said of Richarlison before the start of 2020/21. “He’s still young, but he has a lot of quality, a lot of character. He’s a fantastic player and he can improve.”

Tactical analysis
As a right-footed left winger, Richarlison naturally looks to cut inside from the left channel – the majority of his attacking play involves moving infield from a wider starting position (below), and his attempts to work a shooting opportunity for his favoured right foot mean defenders try to show him on the outside. Since joining Everton he has improved at finding a way back on to his right foot and getting a shot off.

He also combines well with other attackers – via quick and direct passing combinations – to attempt to unlock compact defences, though his primary aim is to work a shooting opportunity and he usually succeeds in doing so, having had more shots per game than any other Everton player in each of his first two full seasons with them. However, over those two seasons he also scored just 26 times from 177 attempts on goal in the Premier League. A conversion rate of lower than 15 per cent highlights a key area in which he needs to improve.

Given he is a Brazilian attacker, it is perhaps surprising he is not the most expressive in possession. More in the mould of Willian than Neymar, he prefers direct running in possession to the use of tricks and flicks, but he is incredibly difficult to stop and can be absolutely devastating. Opposing full-backs try to get close to him to press him on his first touch, in the hope of forcing him into sending a pass back to the left-back behind him, but if they even slightly mistime their challenge, Richarlison can skip away from them and dart away. He is particularly skilled at dinking the ball over a defender’s foot to escape them before bursting forwards.

He is also a significant threat in the air, possessing a huge leap and excellent timing when attacking crosses. At 5ft 10ins, he is often underestimated by opponents at set-pieces, and in open play he makes well-timed runs on the blindside of a defender to get into a position to aim a free header at goal.

As a player who is still learning, his decision-making remains a weakness. Richarlison will too often attempt to dribble his way out of trouble, so if opponents press him aggressively, he can be caught in possession, and he has even been caught on the ball in his own half. If he is successful with that kind of dribble he can relieve pressure on the defence behind him, but he attempts to do so too frequently when he would be better off simply protecting the ball, even if that delays a potential counter-attack.

Role at Everton
Ancelotti tends to play Richarlison on the left side of attack in their 4-2-3-1, though there have also been numerous occasions when he has favoured two up front in a 4-4-2. If he does, Richarlison is then instructed to play even closer to Dominic Calvert-Lewin.

Richarlison and Calvert-Lewin work well together. They both work tirelessly and run the channels constantly to create space for each other and for runners from midfield. Given both are so strong in the air, there has been an increased focus at Everton on getting into advanced, wide positions before putting crosses into the penalty area. In Lucas Digne and Gylfi Sigurdsson, Everton have two players who can deliver wicked balls there, and those are situations in which both Richarlison and Calvert-Lewin thrive.

With the arrival of Rodríguez, Everton’s approach slightly shifted. Richarlison remains on the left, and from the right Rodríguez has the freedom to drift around their front line and to look for pockets of space between the lines. He spends most of his time coming infield on to his left foot and looking to switch play towards Richarlison, who from the left has clear instructions to make consistent runs beyond Calvert-Lewin (above).

Their lop-sided attack, along with Rodríguez’s exceptional passing ability and vision, has the potential to increase Richarlison’s chances of getting in on goal and scoring more frequently. His tally of 13 Premier League goals in each of his first two seasons at Everton needs to improve if they are to realise their ambitions.

Given how often he has the chance to attack around the outside of his opposing right-back, Richarlison also needs to improve at creating chances once he isolates a defender. He far too frequently wastes opportunities to find a teammate from a dangerous position, rushing his attempt to cross, attempting to play a tough ball with the outside of his boot (above), or even cutting back on to his right foot to cross – a delivery that will be much harder for Calvert-Lewin to attack. He would usually be better served attacking the byline and looking for a cut-back. For a left-sided attacker, he isn’t strong or confident enough on his left foot.

Though it feels as if he has been around for a long time, Richarlison is still young, and he has such a good injury record that he has played a colossal amount of football over the past few seasons. In his first three years in England he started 100 of a possible 114 Premier League games and came on as a substitute in nine of the 14 matches he didn’t start. Inconsistency is a completely reasonable consequence of a young attacker playing so regularly. However, as he approaches his mid-twenties, to reach the level of Europe’s best wide forwards he needs to start performing – and scoring – more regularly.