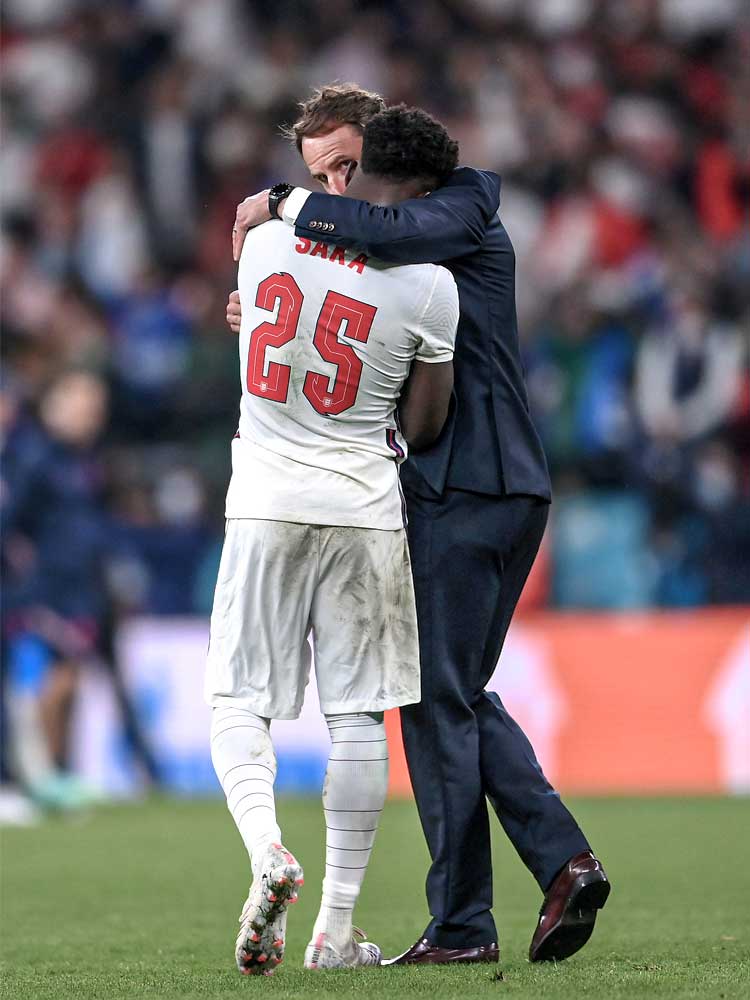 England at Euro 2020: A Tactical Breakdown

England's run to the final of Euro 2020 represented not only their second best performance at any major competition, but their best ever at a European Championship. Coming as it did after they reached the semi finals of the 2018 World Cup, it also demonstrated the extent to which they had evolved as a team, and to which Gareth Southgate and his staff had applied their experiences of what was also a memorable campaign.

For the first time in the modern era, England – vindicating Southgate's experiments since Russia 2018 – regularly changed shape and personnel without being forced to do so by injury or suspension. They also often controlled possession in a way they hadn't since perhaps the reign of Glenn Hoddle, from 1996-1999 – when Southgate so often played in central defence. England have finally adjusted to the demands of international football, and it is for that reason that, even after their defeat in the final by Italy, they will be optimistic about their chances of further success.

Evolving throughout Group D
England's opening fixture came against Croatia, the team that beat them in the semi finals of the 2018 World Cup. On that night they were committed to a 3-5-2, and largely reliant on their effectiveness at set-pieces. Three years on, from what was nominally a 4-2-3-1, they efficiently negated Croatia's attacking potential; Mason Mount drifted towards the left from his role as their starting number 10 to support Raheem Sterling in front of the right-footed Kieran Trippier, who held his position at left-back. Mount and Sterling rotated to take Sterling into a central position, often to the extent that, given Harry Kane's willingness to withdraw into deeper territory, there were moments he was their most advanced attacker; with Kalvin Phillips' forward runs – often into the inside right channel to balance their attack – that 4-2-3-1 regularly became a 4-3-3 (below). Phillips' aggression and timing when pressing was similarly influential in the way he forced Luka Modric into significantly deeper territory.

Using the same shape in their next game, they struggled to break down Scotland's back five. Reece James and Luke Shaw were selected at full-back – Kyle Walker had started at right-back against Croatia – but they largely resisted advancing beyond the wide forwards in front of them. The movements from Kane and Phillips that had been effective against Croatia were considerably less effective against a Scotland side that defended in numbers from their 5-3-2 defensive block. Kane was short of support; given the circumstances either Phillips, operating in a reserved role, or Declan Rice were probably expendable, and Jack Grealish wasn't given long enough to make the impact that was needed of him.

Against Czech Republic's aggressive press, England had increased space in behind to attack into, so Phil Foden was replaced with Bukayo Saka so that in Saka and Sterling, England had two direct wide players, either side of Grealish, their starting 10. All three received the ball with defensive pressure coming from behind them and rolled their direct opponent impressively. Phillips also again made forward runs around Saka who, unlike Foden, favoured dribbling infield and past opponents over combining via passes.

Shaw's performance at left-back proved essential to the way England evolved. He regularly advanced to provide attacking width and accurate crosses; when he supported Grealish or Sterling to attack down the left, England posed their greatest threat. Equally significant was the return to central defence of the fit-again Harry Maguire to make up – alongside John Stones and the recalled Walker – the back three that served England so well in Russia, whenever Shaw attacked. Maguire's ability to advance into midfield also gave those further forward greater freedom, enhancing their variety and their potential to rotate between the lines. Maguire's availability, as much as Shaw's performances and the understanding they have from playing alongside each other at Manchester United, also meant that Trippier wasn't again required out of position at left-back, where his defensive ability and leadership was more necessary when the less experienced Tyrone Mings was deputising for Maguire.

Matching Germany's back three
Until Italy in the final, Germany were England's strongest opponents. England had topped Group D with relative ease after recording two victories and a draw and three clean sheets, but Southgate rightly recognised that a 3-4-3 (above) would give them their greatest chance of winning their round-of-16 fixture. In Mount's absence, Saka and Sterling supported Kane as inside forwards, enhancing England's ability to counter from the 5-2-3 with which they defended; their back three and the double pivot formed by Phillips and Rice also offered a reliable base on which to build possession and meant that rotations weren't required to achieve their desired attacking shape. It was when Sterling was moved towards the right and advanced that they offered greater potential; he complemented Trippier's desire to get into crossing positions and switch play, after they had previously lacked the ability to combine through the inside channels when Germany defended deep.

When Grealish replaced Saka in the second half and featured towards the left, his desire to attack infield contributed to England's most effective period. Shaw advanced further forwards outside of him and, with Trippier's positioning helped Sterling to isolate Antonio Rüdiger, both goals came from England's left. The latter of those was Kane's first of the competition, and built a sense of momentum and confidence he and England had so far lacked in the competition. Robin Gosens poses a significant attacking threat from left wing-back, but England's out-of-possession 5-2-3 meant Walker and Trippier could double up on him, particularly given he was often the target of crosses Germany hoped to avoid playing towards Stones and Maguire.

Courage, conviction, and further variety
Southgate correctly identified that Ukraine and Denmark, respectively their quarter-final and semi-final opposition, demanded England should again revert to a back four, with further changes in personnel. For the 4-0 victory over Ukraine, who defended with a low block and a 5-3-2, fluid combinations between Sterling and Shaw offered particular potential; Kane also resisted withdrawing to the same degree, and Jadon Sancho was selected wide on the right to, unlike Saka, dribble outside of Ukraine's shape. The recalled Mount, in turn, instead drifted to the right to support Sancho, and Phillips remained reserved.

From the same starting shape against Denmark, Kane was again encouraged to move into deeper territory, and Mount towards the left (above), and therefore Sterling to again make runs infield. Kane often moved towards the right, where Saka again started in place of Sancho and where, for the first time, Rice advanced as regularly as Phillips had done earlier in the tournament. England used triangles both on the right and the left, and were able to recover from conceding their first goal of the tournament by eventually breaking down Denmark's tiring, but resilient, defensive block.

The same variety extended to when they defended. On the five occasions their starting shape featured a back four, England applied a high press, and both mid and deep, compact low blocks. Their compactness in central areas was a consistent strength, and was secured by their three central midfielders covering the territory in front of their two central defenders, and Kane working to help force the ball wide. There was a similar work ethic and understanding from their wide players; when quickly withdrawing into a lower block, their wide forwards worked back to prevent the full-backs behind them from being outnumbered (above). When a mid-block was required for lengthier periods, they adopted a 4-4-2 (below) that helped force the opposition wide and doing so proved particularly effective against teams with more than one player capable of building possession from the base of midfield. In a further sign of their improvement since 2018, they were also more effective at defending against crosses – as conceding only two goals throughout the tournament, both from set-pieces, demonstrated.

Walker's deeper position when England built possession was particularly valuable. His pace – and therefore ability to recover his defensive position – and his composure minimised opponents' attacking potential on their left, and the importance of his presence there meant that he was also instructed not to advance too far even when England were applying a high press. Stones and Maguire were similarly impressive when defending as individuals and when advancing to make interceptions or contest forward passes, often maintaining England's attacking momentum and contributing to the control they achieved during their knockout matches.

The fans' favourite
Not since the days of David Beckham has an England player been as popular as Grealish, and not since those of Michael Owen and Fabio Capello has a manager been asked so many questions about a player's potential inclusion. It was therefore inevitable Southgate's use of Grealish would divide opinion. Long proven as a left-sided wide forward, it took Shaw becoming established as an overlapping left-back for Grealish's favoured conditions to exist, even if he also impressed as England's number 10 against Czech Republic.

Kane's effectiveness in withdrawing to link play made it crucial that another player offered penetrations through the centre of the pitch, and Grealish provides those less than Sterling, Marcus Rashford and Sancho do. If Foden had also been selected, a player who instinctively favours threatening in behind would already have been sacrificed to include him, in turn making Grealish's inclusion harder to justify. Mount, his rival at number 10, offered greater defensive security and control in the centre of the pitch. Grealish proved most valuable against lower defensive blocks, such as that used by Scotland. There were periods when Germany, Italy and Denmark all used low blocks, and when Grealish then proved England's most threatening attacker.

The final hurdle
In the final, when Southgate reverted to the 3-4-3 that was so crucial to them beating Germany, England were presented with different problems. Italy's midfield three were significantly more comfortable on the ball for lengthier periods, and with at least one wide player always seeking to attack in the wide areas of the pitch, England were forced into their 5-2-3 deep defensive block for longer than they were against Germany. Italy's was also the first attack England struggled to contain, and the first defence they struggled to counter. They had issues on the break partly because Mount, who had been unavailable against Germany, was selected at the expense of a penetrative runner.

When Federico Chiesa was moved to the left and Lorenzo Insigne into the centre, England's 5-2-3 came under increased pressure, and they conceded the equalising goal. Southgate responded by reorganising his team into a 4-3-3 that matched Italy's structure, but England's attack lacked threat, even after Chiesa, Insigne and Marco Verratti – the Azzurri's three most influential attacking players – were replaced. Saka and Jordan Henderson were the first substitutes Southgate introduced, but they proved less effective at creating against Italy's admired defensive block than Grealish, who came on in extra time for Mount. Mount's moved into deep positions too often, thereby limiting the support for Sterling, who drove forwards beyond Italy right-back Giovanni Di Lorenzo.

Di Lorenzo often advanced to mark Shaw, but even when he did so Mount struggled to make runs beyond him, highlighting the effectiveness of penetrative runners against opponents – like Italy – likelier to control the ball. Mount is most influential when those around him are offering fluid movements, but from England's 3-4-3 there is less freedom than there is in a 4-3-3 or 4-2-3-1, even if his ability when duelling, pressing and defending was a strength when England were without the ball.