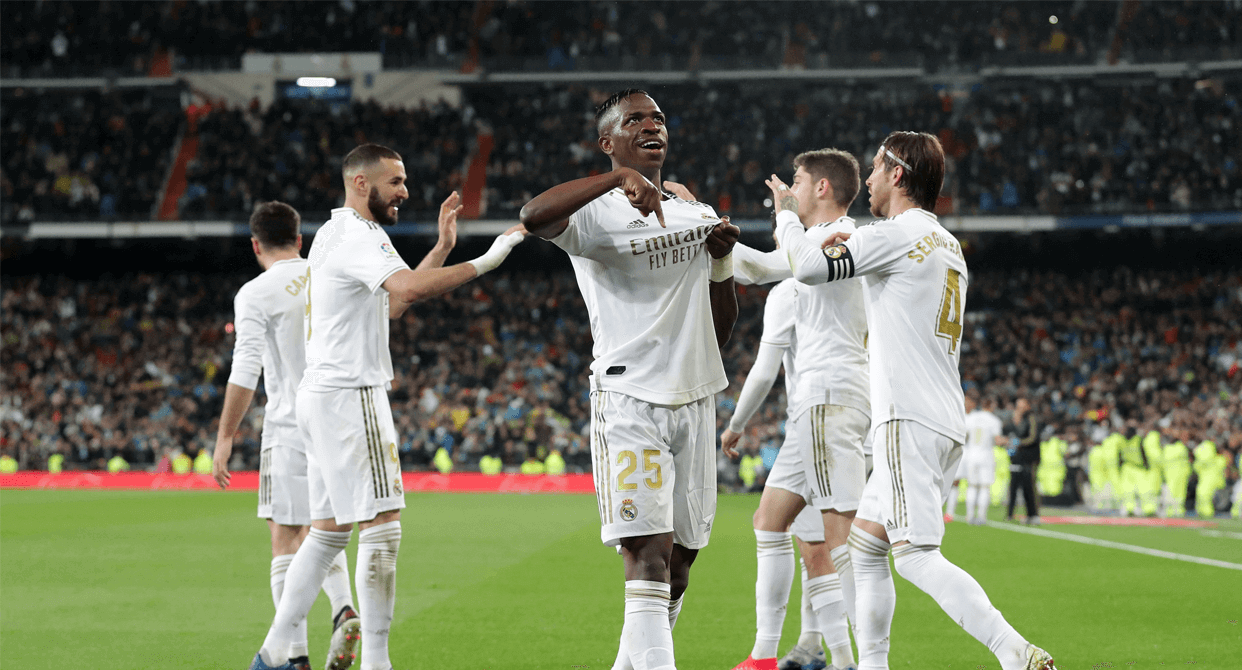 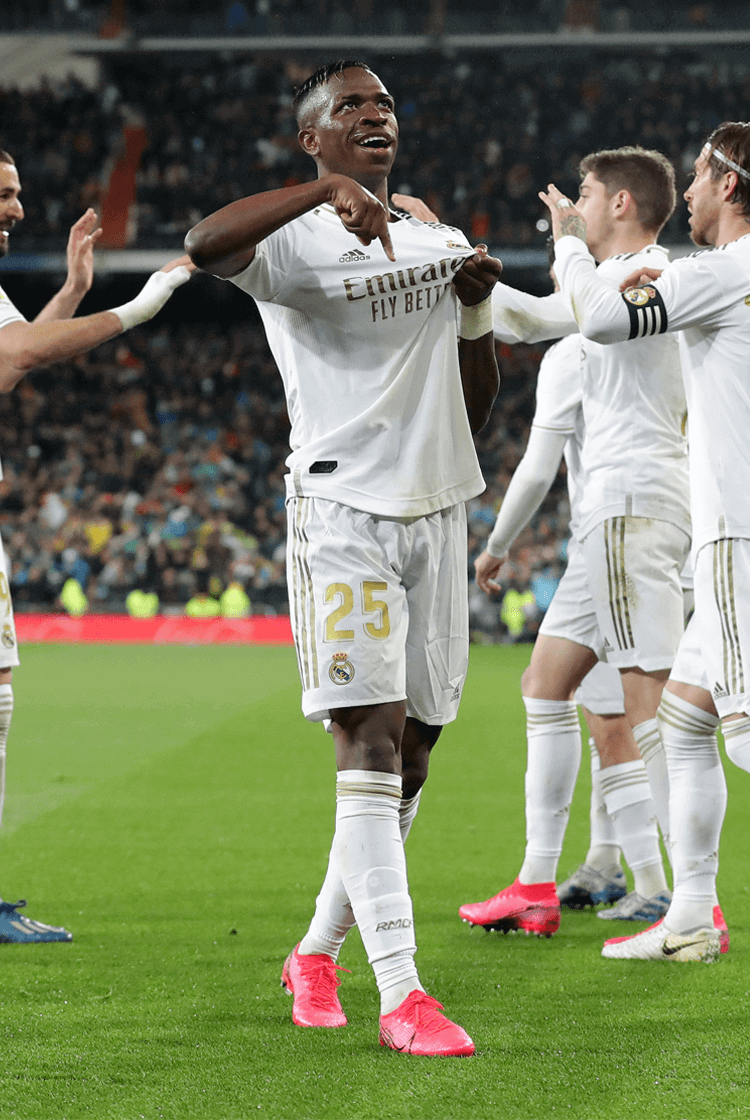 Real Madrid returned to the top of La Liga with victory over Barcelona, ensuring Zinedine Zidane’s team swiftly moved on from the disappointment of their home defeat by Manchester City in the Champions League. As has become customary in El Clásico, this was again a clash of styles; Quique Setién's possession-focused Barca dominated the ball for lengthy periods and Real attempted direct, speedy attacks. On this occasion Real’s pace eventually succeeded, when Vinícius Júnior gave them the lead with 20 minutes remaining, and when substitute Mariano added a further finish in stoppage time. "We deserved our victory for everything we did, in attack and defence," Zidane said afterwards. "It has been a complicated week for us and we had the chance to turn things around, and we did that. But this win also doesn't change anything. We have a long way to go and we have to continue. We've got three important points but we'll have more difficult games, and we will be criticised again." 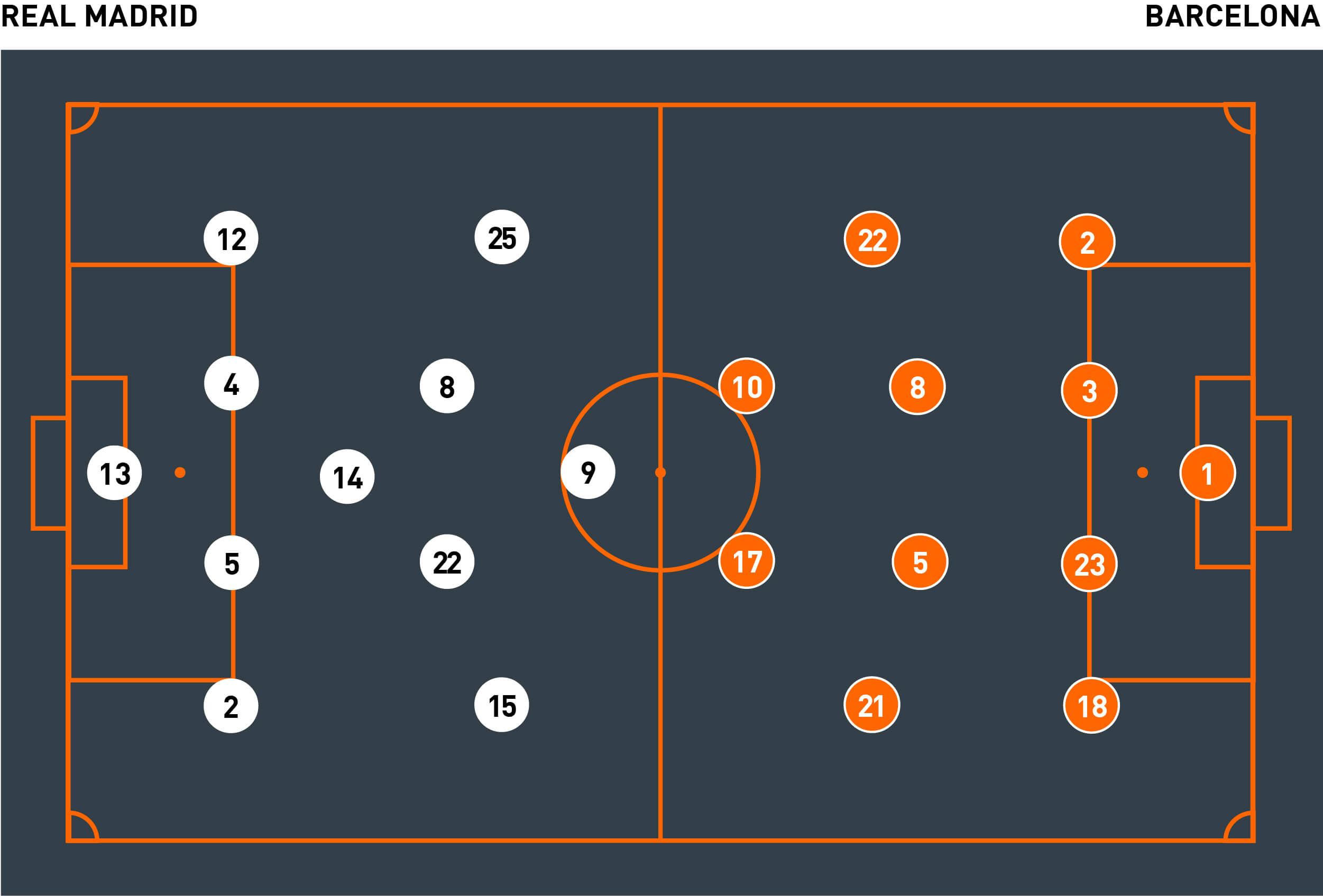 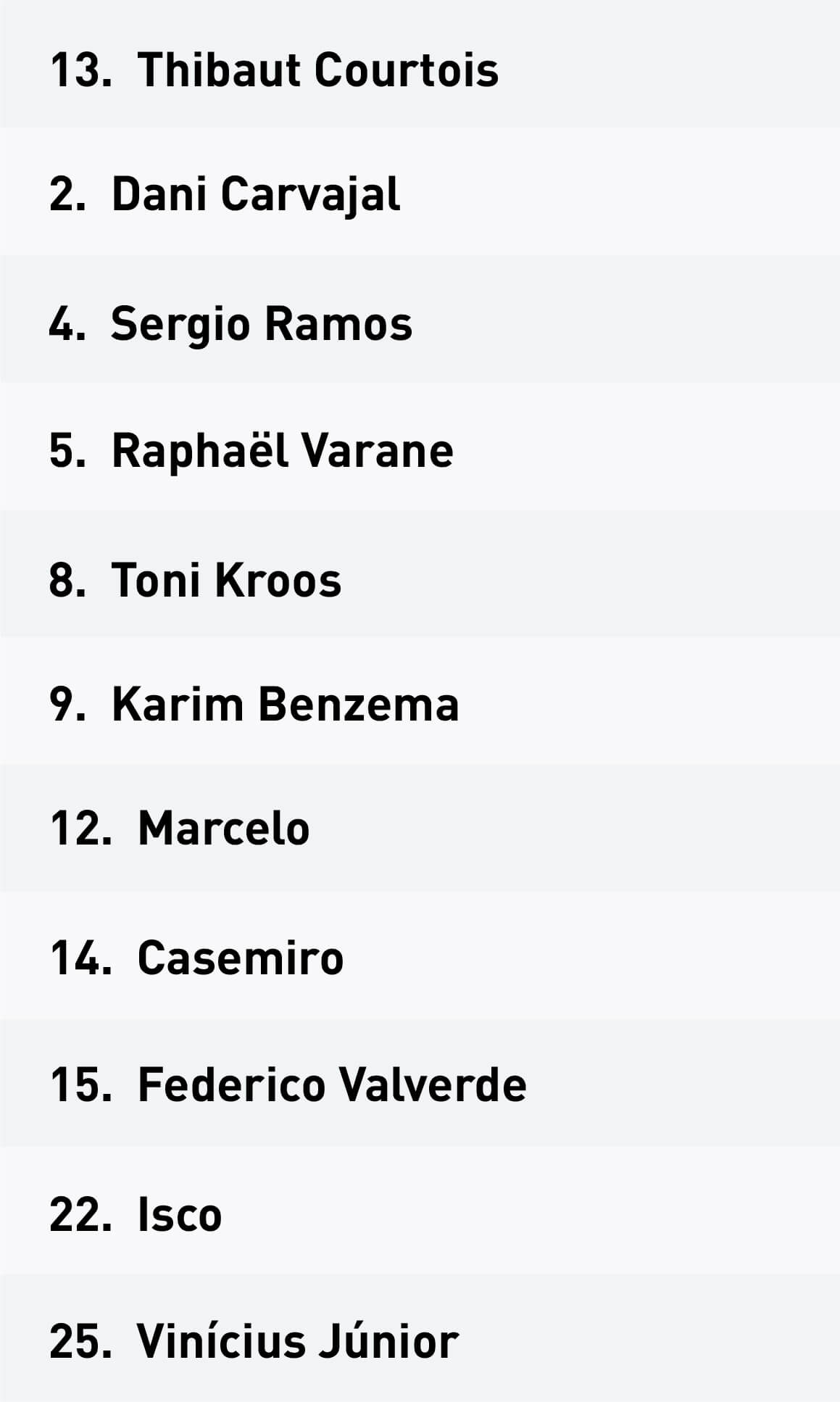 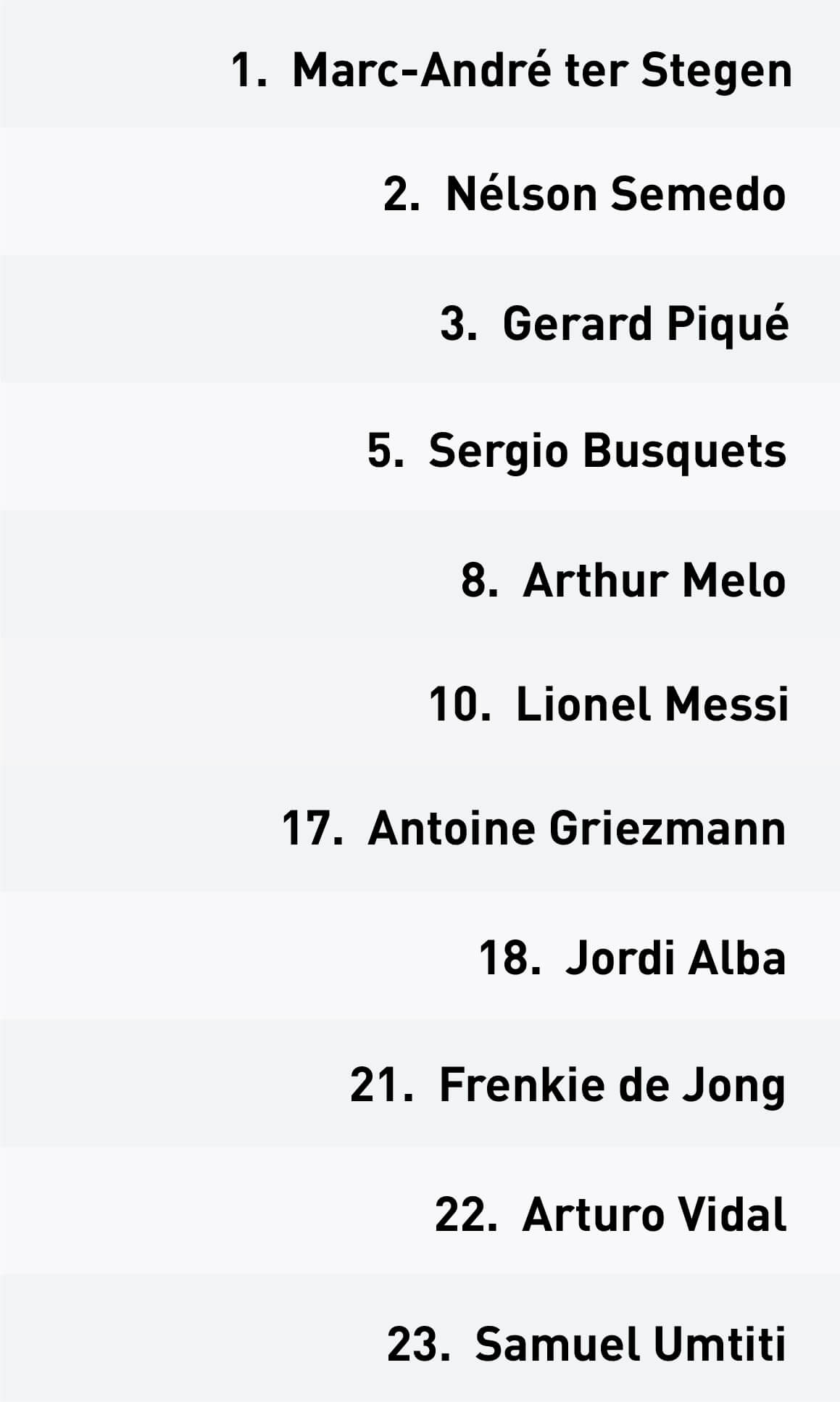 Real Madrid were organised by their manager Zinedine Zidane into a 4-3-3 formation, featuring Federico Valverde towards the right instead of in his usual central midfield position, and Isco in a free role behind Karim Benzema. Luka Modric was rested after his exertions in the Champions League against Manchester City, and Marcelo started at left-back, behind Vinícius Junior, who had previously impressed against Kyle Walker.

Real applied a direct approach with which they prioritised attacking towards the left, where Vinícius and Marcelo attempted to create overloads against Nélson Semedo, largely because Barcelona were using such a narrow midfield that Arturo Vidal’s positioning left Semedo exposed. The Brazilians regularly succeeded in doing so, and therefore posed many of the problems Barca encountered during the first half.

The hosts pressed with intensity, matching Barca player for player – without charging after the ball when it reached goalkeeper Marc-André ter Stegen, because doing so would have left one of Barca’s outfielders free to receive possession – and troubled their opponents by winning the ball in dangerous positions on several occasions. Yet as the first half progressed Real were increasingly content to back off from their opponents, and did so in a 4-4-2, with a mid-block.


Valverde’s leading responsibility became tracking Jordi Alba’s forward runs, so there were occasions when he dropped to so deep a position that he was stationed behind Dani Carvajal. After their early intensity, when Real regained possession they circulated it in defence in an attempt to draw their opponents, before complementing a swift change in tempo with a direct ball forwards, often towards Vinícius.

Real’s most encouraging moments came during the second half. They grew in confidence when the free-roaming Isco's influence grew, leading to him testing Ter Stegen from outside of the penalty area, and seeing a header cleared off of the line by Gerard Piqué.

A notable increase in intensity followed in the final 20 minutes, when Barca also struggled. As the visitors withdrew to towards their own goal, Vinícius found space in front Semedo, drew the right-back and, after Toni Kroos saw his run in behind, he cut inside and finished, via a deflection off of Piqué.

Barca were therefore under pressure to take more risks, and when they did so Casemiro excelled in winning back possession. Barca left spaces in defence, and Zidane’s decision to retain a striker was therefore rewarded when substitute Mariano scored a further goal.

Barcelona abandoned the 4-3-3 formation Quique Setién has so far largely demanded in favour of a 4-4-2, and a very narrow midfield comprised of Arturo Vidal, Frenkie de Jong, Sergio Busquets and Arthur Melo. Jordi Alba returned to provide an increased attacking threat from left-back, Nélson Semedo provided the width from the right, and Antoine Griezmann and Lionel Messi formed a front two.

Typically for one of Setién's teams, Barca retained the ball for long periods in an attempt to force Real back into their defensive half, built slowly from the back, and attempted to play through the central areas of the pitch. They also tried to crowd the central midfield area with four technically gifted midfielders, and to play quick, short passing combinations.

On several occasions Federico Valverde abandoned his job of tracking Alba’s runs, and instead adopted a narrower position to balance the numbers within central midfield. Messi’s movements between the lines also tested Casemiro and Raphaël Varane, because they often had to decide which of them should follow him.

Busquets played a key role in playing through Real’s midfield, finding pockets of space behind Isco, and turning to launch attacks; on one occasion during the first half he played Messi through on goal, before watching Thibaut Courtois make a crucial save. After a frantic start in which both teams counter-pressed and repeatedly won possession high up the pitch Barca took control, and retained the ball in their attempts to wear Real down.

The visitors' attackers played with freedom to roam and to withdraw into midfield to link play, producing moments of quality, but often at the expense of a focal point further forwards. If they attempted to overcome this through Vidal joining their attacks – particularly to attack crosses from Alba – the injured Luis Suárez's absence continued to tell.

For all of Marcelo’s attacking potential he remains vulnerable defensively; but Setién’s decision to play Vidal – and not a natural winger – on the right meant that he was too rarely tested. Martin Braithwaite was later introduced on the right when they adopted a 4-3-3, and he almost had an immediate impact when he was played in behind Marcelo, but he then struggled to finish.

Barca lost their shape as they pushed for an equalising goal, and while Messi also dropped deeper in an attempt to exert a greater influence, the threat he poses closer to goal was being sacrificed. Possession was repeatedly lost as they took more risks, ensuring that they were then punished on the counter.