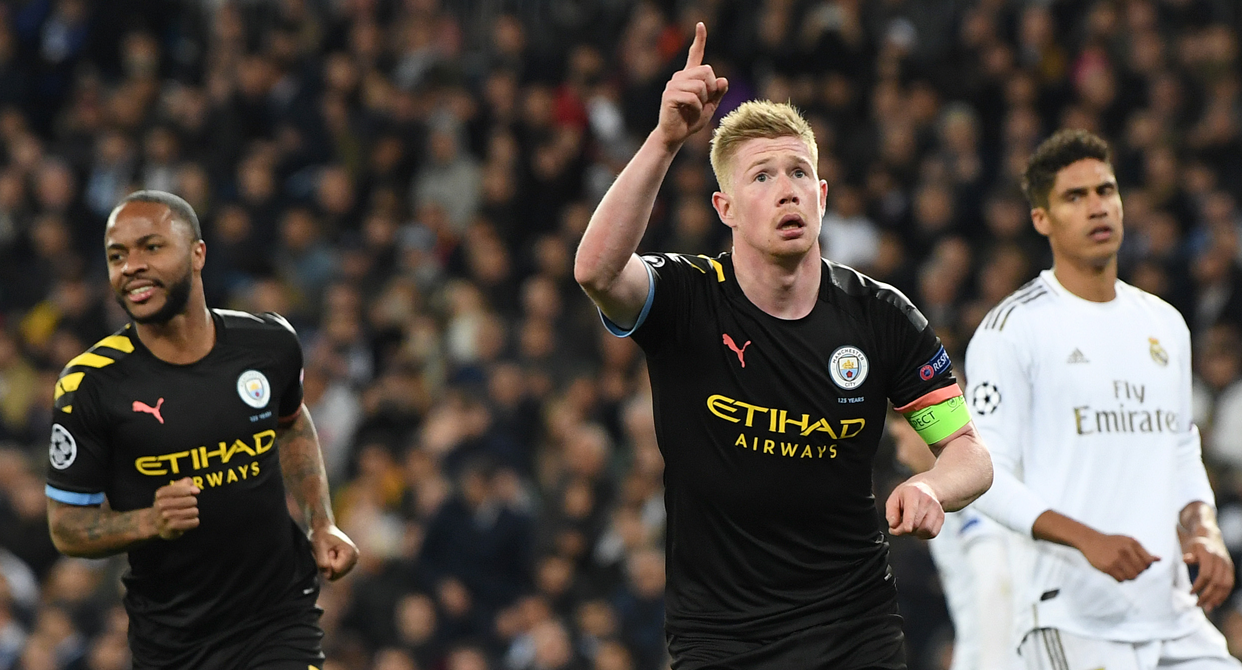 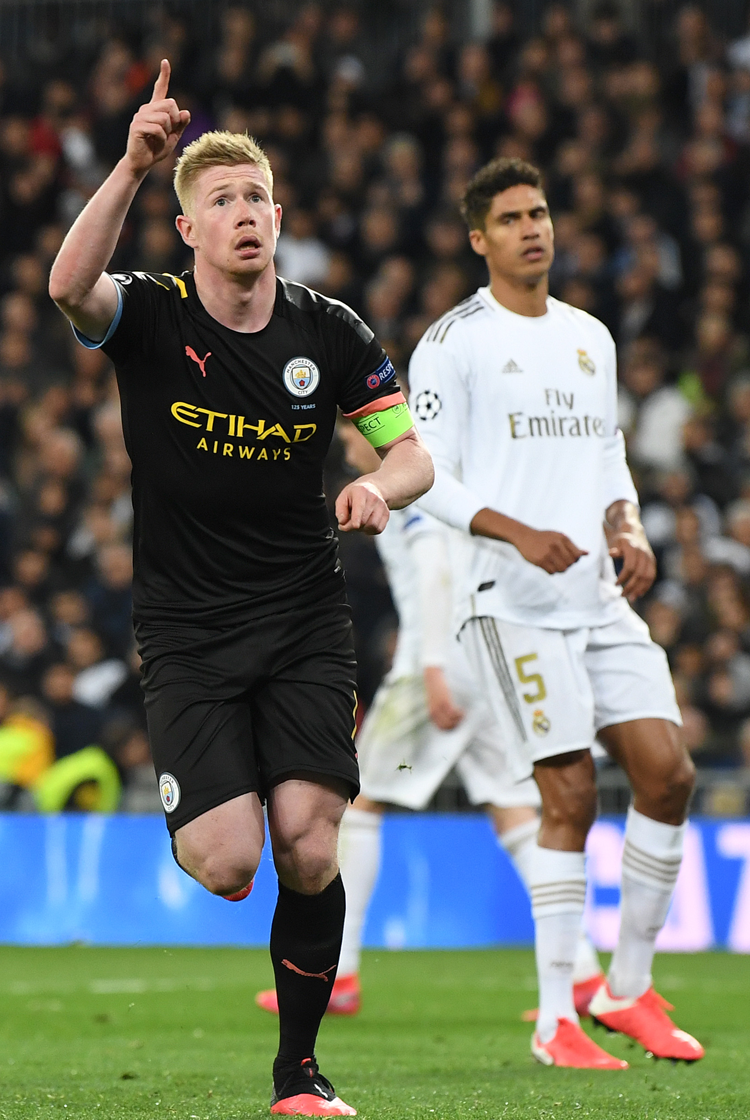 Manchester City secured their first ever victory over Real Madrid, when Pep Guardiola gambled on his return to the Santiago Bernabéu by naming David Silva and Sergio Agüero among City's substitutes, Gabriel Jesus on the left, and Kevin De Bruyne and Bernado Silva as false number nines. Even after Isco gave hosts Real the lead during the second half, finishes from Jesus and De Bruyne's penalty gave them an encouraging lead; their optimism will also have increased with Sergio Ramos' red card. "We tried to come here to win the game and we did," Guardiola said, having overcome Zinedine Zidane's team. "This is just the first part. If one team can overcome this situation, it's this club. When we were better, we conceded a goal. When they were better, we scored a goal. That's football. I remember the quarter-final (against Liverpool) a few seasons ago at Anfield when we played incredibly well and they scored all their shots on target." 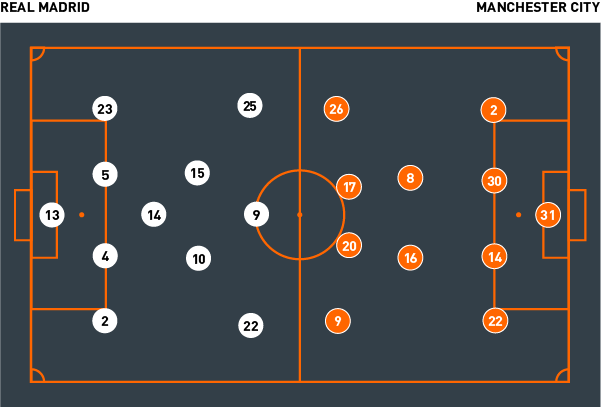 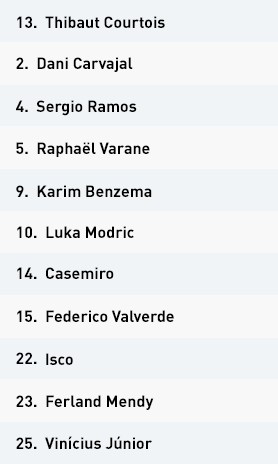 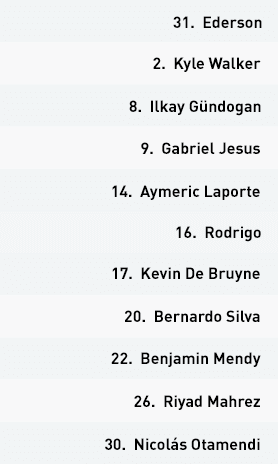 Zinedine Zidane organised Real Madrid into a 4-3-3 formation led by the front three of Isco, Karim Benzema and Vinicius Junior. They faced opponents who defended with a 4-4-2 formation, and who started with Gabriel Jesus in an unfamiliar position on the left side of midfield, and with Kevin De Bruyne and Bernardo Silva up front.

Manchester City withdrew, offering a lower line of engagement out of possession than has ordinarily been seen under Pep Guardiola, and therefore inviting Real into their half in the hope of then exploiting, on the break, the spaces that that created. Real circulated possession in pursuit of a way through City’s mid-block, and individuals switched positions in an attempt to open up passing lines.

These switches typically involved the wide attackers and central midfielders. Casemiro largely remained central, but Luka Modric regularly moved wide while Isco drifted inside – on the blind side of Jesus – to receive possession between the lines. City regularly had to pass opponents on to teammates, and to communicate with each other, to protect the central area of the pitch.


City’s compactness was intended to restrict any form of penetration through those areas. They sought to screen Real's midfielders, and to ensure that any individual who received a pass centrally was immediately pressured from behind so that he couldn’t turn. That Real had so little success with those passes reflected the extent to which City succeeded.

As the space between City’s lines was reduced, Real changed their approach by sending longer passes over the top of City's shape to encourage penetrative runs by their wingers or full-backs, but City’s full-backs Benjamin Mendy and Kyle Walker proved similarly quick. City therefore encouraged those longer passes when they engaged Real further forwards; De Bruyne and Silva pressed central defenders Sergio Ramos and Raphaël Varane but City’s midfielders, Ilkay Gündogan and Rodri, were positioned much closer to De Bruyne and Silva than their defence, forcing Real to play long instead of into a crowded area.

The only significant threat Real posed was when they recovered possession in City's half and launched a counter-attack with only a short distance to goal. When they won the ball they generally looked to their left and the pace, during transitions, of Vinicius, who attempted to make diagonal runs across Walker and into the penalty area. Real’s best chances – and their only goal – came in transitional moments after City made mistakes in possession.

Manchester City used a bold 4-2-4 formation while they had possession, involving Pep Guardiola positioning Riyad Mahrez and Gabriel Jesus as their wide attackers, and Kevin De Bruyne and Bernardo Silva operating as false number nines. Real Madrid defended with a 4-4-2.

City’s in-possession structure was intended to test how central defenders Sergio Ramos and Raphaël Varane handled the deep, central positioning of De Bruyne and Silva. City attempted to overload those central areas and to use their false nines to draw Ramos or Varane, to create space for Mahrez and Jesus to advance into, by running across the relevant full-back from a wide starting position. Varane proved the more disciplined of the two, in holding his position; Ramos aggressively stepped out to track City's false forwards, to prevent them from turning, and he often won possession.

Despite City’s intelligent approach they struggled to create much during the first half. Real kept a high and aggressive line while they were without the ball, forcing Ederson to make longer passes; the goalkeeper's usually excellent distribution was also poor, by his standards, and on several occasions he therefore gifted possession back to Real.

When City succeeded in playing through Real's press, De Bruyne and Silva withdrew into positions to receive the ball on the blind side of Real's midfield but at a suitable distance from Ramos and Varane to continue to test them. Zinedine Zidane's team responded through their central midfielders Federico Valverde and Casemiro following De Bruyne and Silva, but City’s playmakers persisted with their position behind Real's midfield, in turn creating space for central midfielders Ilkay Gündogan and Rodri.

Raheem Sterling’s introduction gave City greater quality in front of goal, through Jesus moving centrally, and Sterling attempting to stretch Real with regular runs in behind. City became increasingly dangerous during transitions, when they looked to create an immediate passing line to one of De Bruyne or Jesus, their false nines. They combined with Sterling and Mahrez to launch counter-attacks, resulting in their two late goals.