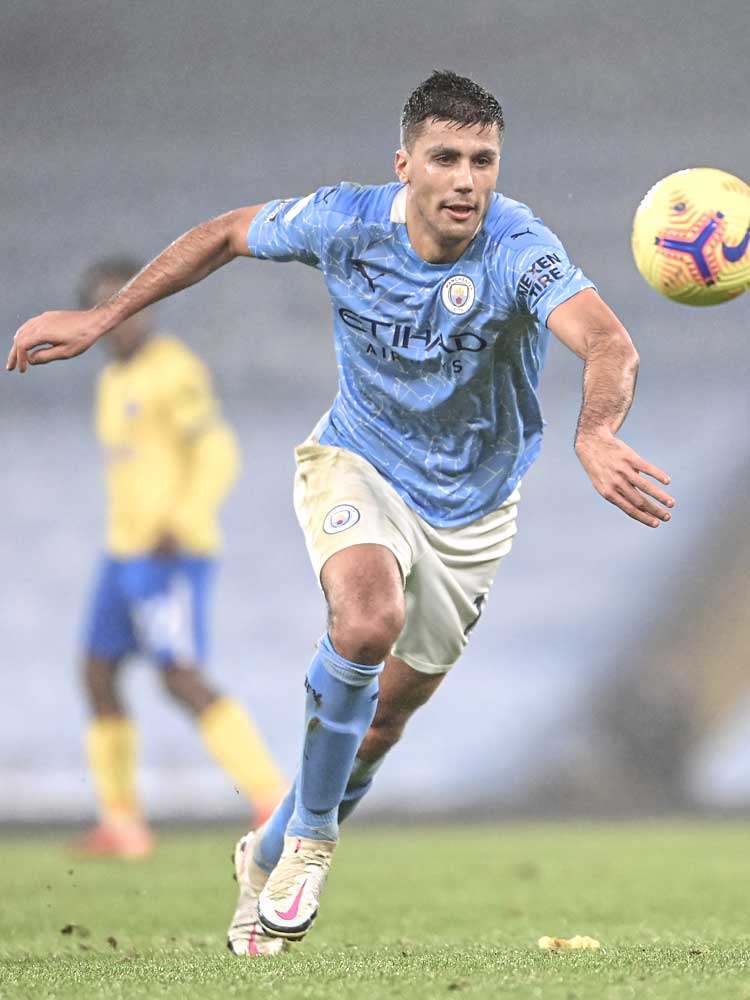 Profile
When Manchester City signed Rodri for a club-record fee of £62.8m in July 2019, they were taking a big risk on a 22-year-old who had played for Atlético Madrid for just one season following two impressive campaigns at Villarreal. Making his way in Champions League-level football, Rodri was brought to the Etihad as the long-term successor to Fernandinho in City’s midfield. After needing a period to settle, he has become an important member of one of the best teams in Premier League history, under the guidance of one of football’s true innovators in Pep Guardiola.

“He’s improving a lot,” Guardiola said. “He is starting to read what happens better. Still he’s trying to solve it with his incredible energy, but he is starting to think (more). We have the feeling that he has made an incredible step forward in the way we play.”

Tactical analysis
Rodri the player is a long way from the perception of the typical Spanish central midfielder. Tall, lean and physically imposing, he is an energetic, combative and tenacious midfielder who excels in regaining possession as much as he does with the ball. He covers lots of ground, supporting attacks from the base of midfield but also providing security against counter-attacks by rarely moving ahead of the ball. He has brilliant anticipation and is particularly effective at dispossessing opponents by nipping in to steal the ball as a pass approaches an opponent.

Given his size, nationality and position, comparisons have inevitably been made with Sergio Busquets, who was once so influential under Guardiola at Barcelona. Just like Busquets, Rodri records consistently impressive defensive numbers, regaining the ball through tackles or through picking up second balls through adopting good, effective positions in central midfield.

They are also similar in that Rodri rarely goes to ground, preferring to jockey or delay attackers before using his upper body strength to manoeuvre them off the ball. Even when chasing an opponent or making a recovery run, he rarely commits to a slide tackle. Instead, he chooses to bide his time to wait for the opportune moment to attempt a tackle, and he tends to win the ball more often than not when he does. His tackling numbers are, predictably, given how much City dominate possession, far lower for City than they were at Atlético, but it is an impressive indication of his ability that he has been able to perform a defensive midfield role for two teams with such contrasting styles.

That is ultimately because, while his reputation has largely been built on his significant defensive abilities, Rodri is also extremely adept in the building phases of possession, both when he has time on the ball to distribute passes and when resisting pressure. He often leaves the more adventurous passes to his more attack-minded teammates, but he is capable of breaking lines with incisive, vertical passing, and that has been particularly useful as City attempt to feed their talented attacking midfielders between the lines.

Both at Atlético and at City, Rodri has displayed particular skill when playing chipped passes in behind for a right-sided attacker to run on to. A well orchestrated move where, as the opposing defence pushes up once the ball is moved to Rodri at the base of midfield, his team’s attack retreat before the right-sided attacker quickly bursts forwards and Rodri lifts a pass into their path (above). The right-sided attacker can then play a ball across the face of goal for a simple finish, in typical fashion for Guardiola’s City.

Role at Manchester City
Guardiola has used both a single and a double pivot during his tenure as City's manager, and Rodri’s ball-winning capabilities, physical prowess and ability in possession allow City to use a formation that requires just a single pivot – 4-3-3 is the most common. The way City build in possession, however, they often flit between a single and double pivot mid-game.

City often build in a 3-4-3 formation, with Rodri and one of their full-backs – João Cancelo has proved particularly comfortable doing so – at the base of a narrow box that they form with their two number eights (below). Those two more advanced midfielders take up positions between the lines to receive the ball from Rodri or Cancelo, who look to get the ball from defence and play forwards. Their wingers stay high and wide to stretch the opposing defence, so that if one of their number eights can turn on the ball, there will be gaps to play through immediately.

Rodri will remain behind the ball and provide security along with the four defenders if the ball is lost and the opposition launch a counter-attack. At defensive transitions, City had been too vulnerable when Fernandinho wasn’t available in central midfield, but Rodri has given his team some much-needed stability.

He impressively senses opportunities to win the ball, and he is not scared to push forwards, and while he normally provides the second wave of City’s press by following their attackers’ press, there are occasions when he spots a chance for a regain and will move beyond the other midfielders to press (below). Doing so represents a high-risk approach given the gaps he might leave in central midfield, but he has a good enough reading of the game and presses with enough aggression that when he goes for the ball, he is often successful.

He is also very good in the air, and playing for a manager like Guardiola, who places more importance on technical ability than physique, Rodri’s size is extremely useful. He plays a key role at defensive set-pieces, consistently making important clearances, and also does a good job of winning clearances after one of City’s attacks breaks down and of securing possession for his side – key to City being able to pile pressure on the opposition by starting a new attack as quickly as possible following a clearance.

His price tag and the need for an alternative to Fernandinho in central midfield meant that Rodri arrived with expectations high. He took time to settle, but he has reached the level of importance City had hoped he would when they signed him. He has become crucial to a team that has very few weaknesses.