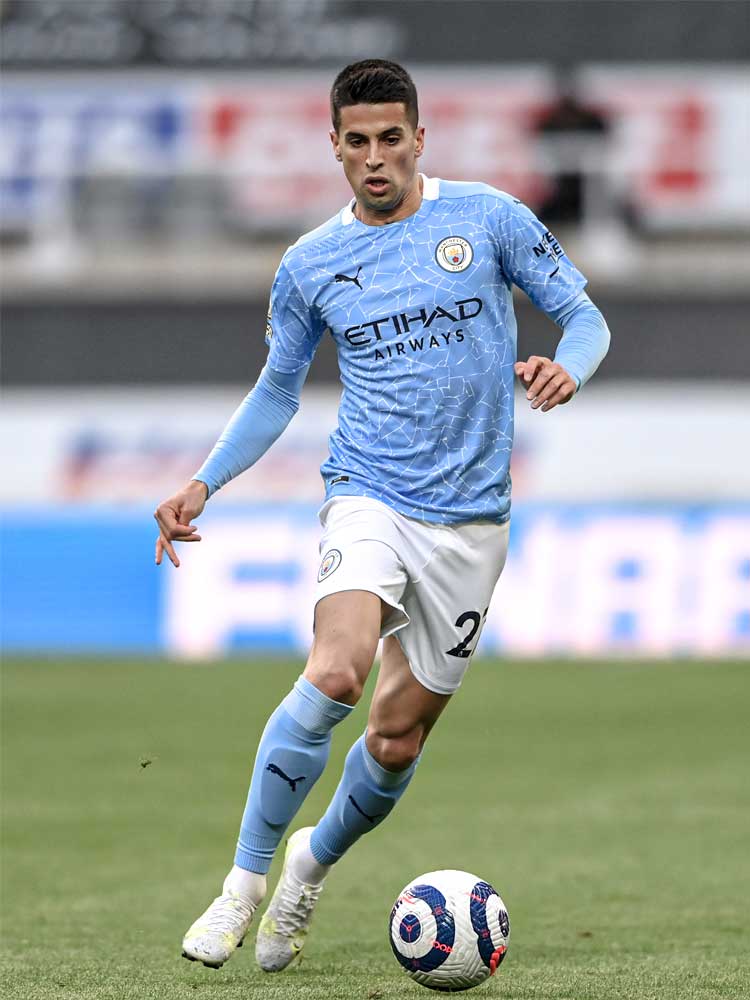 Profile
João Cancelo made a slow start at Manchester City following his £60m move from Juventus in the summer of 2019, and doubts soon surfaced as to whether the club had been right to sanction another expensive addition, then 25, to Pep Guardiola’s defensive options. With Cancelo having since settled, however, those doubts have dissipated, because the former Inter Milan and Valencia defender has developed into a key player in a rejuvenated team.

Able to play on either side of defence and – crucially – also comfortable moving into midfield to add an extra number alongside Rodri when City have the ball, Cancelo has been a revelation. He is affecting play at both ends of the pitch, and Guardiola has been impressed with how quickly the Portugal international has taken to his midfield role. “No (he had never played there before),” Guardiola said. “But you see the training sessions; the games; how he moves; how he controls it; how he handles the relationship with teammates inside and outside. Other players in the back cannot play (in midfield). They can play wide, but he has the skills to play there.”

Tactical analysis
Cancelo has been most regularly used as a right-back throughout his career, but he has proved a both a versatile and malleable option wherever he has gone – something that will have added to his appeal to Guardiola before his move to City. Cancelo is capable of playing either as a full-back or a wing-back on the right, and has played numerous games for City at left-back. Such is his comfort on the ball that he has been developed under Guardiola into one of his hybrid players who plays both at full-back and in central midfield in the same game.

When playing as a traditional full-back – traditional in the sense that he sticks to his wing rather than moving into midfield – he times his forward runs well. He tends to move forward when in possession rather than making lung-busting overlapping runs around the outside of a teammate, and he prefers to receive to feet rather than chase through balls. On the ball, he is equally capable of cutting infield from the right as he is going around the outside, and will regularly look to cross with his weaker left foot or drive inside the opposing left-back and look to combine with those further forward.

He is a very strong dribbler and that ability, combined with the fact he is confident on either foot, makes him extremely difficult to defend against. He is adept at skipping away from an opponent from a standing position, and he can cross off of either foot, so he is very good at finding a way to put a cross into the penalty area having received a pass to feet. He whips his crosses in at pace, avoiding putting them in at too great a height and instead aiming for a specific teammate in the hope that they can use the speed of his cross to simply guide the ball towards goal.

He is extremely comfortable in possession, and he shows impressive composure when under pressure, often happy to dribble his way out of trouble – even in his own half. Teammates can trust him with the ball in crowded areas, and he is also extremely adept at securing possession following a clearance by the opposition. He shows good anticipation of where the ball will fall and cushions it with real skill – often with his head – to get it under control so that another attack can immediately be launched (below).

Defensively, he shows a good understanding of his responsibilities, keeping the space between himself and the centre-backs to a minimum when the opposition have the ball. When he does break away from defence, it is usually because he has spotted an opportunity to intercept.

He is also fast enough that he can recover well at defensive transitions, and is always aware of the space he leaves behind him when his team attacks. He is quite strong in one-on-one situations and never shirks a tackle, but he sometimes struggles to shift his weight to his left if an opponent quickly moves the ball and takes him on on that side. If he were to have a weakness for opponents to target, it would be dribbling at him on his left.

Role at Manchester City
Cancelo’s fascinating role under Guardiola has helped transform their fortunes. He seems to be equally comfortable at right-back and left-back, and that versatility has been extremely useful in a pandemic-hit 2020/21 when injuries have occurred and rotation has been necessary. Whichever side he plays on, though, when City have the ball, he is more like a central midfielder.

City most commonly start with a 4-3-3 formation – the shape they take up when out of possession – but when building play from the back they shift to a back three, with Cancelo moving into central midfield alongside Rodri, leaving five players to form their attacking line. Their wide forwards stay high and wide to stretch the opposition’s defence across the pitch, and the three remaining players make runs in opposite directions – for example, one in behind and two back towards the ball – to try and create space to receive between the lines.

With their back three spread wide across the pitch – and able to guarantee numerical superiority over the opposition’s attack by using Ederson, where necessary, to make a four – Cancelo, Rodri and two attacking midfielders often form a box in midfield to overload central areas (above). If the opposition react by remaining narrow to maintain parity in midfield, there will be a direct pass from defence to a wide forward. If City can instead play centrally, Cancelo is often their target – he has proved brilliant at receiving in central midfield and progressing play with daring and accurate forward passes.

Cancelo isn’t just there to move the ball to their attacking players, though. He has become one of City’s most effective creative players, often adopting positions in either half-space before delivering a ball into the penalty area or slipping a through ball between defenders. He has good vision for those types of passes and looks remarkably comfortable playing the final ball in a move given he is in such a new role.

He is particularly effective at finding a late-running number eight in the area, and it is no coincidence that Cancelo’s growth in his new role has coincided with the best goalscoring form of Ilkay Gündogan’s career at City. When in a more withdrawn position, meanwhile, Cancelo is adept at moving into central midfield and picking out a ball over the top for a runner in behind (above).

While he has contributed so much to City’s improvement with the ball, his position also makes City more solid without it. Previously, City had often used a single pivot in midfield and a back four, which meant that if a full-back joined their attack they had too few numbers left behind the ball. With Cancelo instead adding an extra body in midfield, their attack still has sufficient strength, and City are better set up to deal with defensive transitions. He and Rodri are fantastic at sweeping up second balls in midfield, and helping regain the ball quickly to lay the foundations for City’s next attack. Cancelo has proved a revelation, and City are reaping the benefits.