Profile
Antoine Griezmann found life at Barcelona challenging following his £107m move from Atlético Madrid. Having become one of the most influential players in Diego Simeone’s side, he had to readjust to life in the shadow of others – namely Lionel Messi – at the Camp Nou.

However, after a difficult and trophyless first season under Ernesto Valverde and Quique Setién, the departure of Luis Suárez to Atlético and Ronald Koeman’s arrival as manager have improved Griezmann’s prospects. While he is still playing in a wide position, there are more opportunities for him to get closer to goal and to score more often.

Tactical analysis
Griezmann combines the goalscoring instincts of a number nine with the creative qualities of a 10. He likes dropping into deeper positions to receive passes to feet before turning and advancing play with a pass, but he also gets into the penalty area and has more close-range chances than a traditional 10 would.

At Atlético, Griezmann was accustomed to playing in a front two, but would usually be the more withdrawn of that two. Aged 27 he helped France win the 2018 World Cup, meanwhile, in a front three alongside Olivier Giroud and Kylian Mbappé. He is a versatile forward who can do a number of different jobs and offers a threat in a variety of ways.

Much of his effectiveness owes to him drifting away from his position – wherever he plays – and therefore forcing opposing defenders into a decision over whether to follow him or to pass him on to a teammate, potentially leaving him free to collect possession in midfield. Griezmann is skilled at moving into positions that make it difficult for the opposition to know whose responsibility he is, thereby increasing the chances that he will be left free. He also has the ability find a forward pass after a defender follows him out of position, creating the possibility of a teammate getting in on goal (below).

When he drifts around the attacking third, Griezmann scans constantly and looks for where spaces are opening up so that he knows where to play when he receives possession, or where to run. With the picture he builds in his mind he knows when he is able to turn and play forwards and when he has to play back to a teammate in the direction he is facing, and he makes good decisions regarding which option to take, which is very important given Barça’s dominance of possession. It is nearer to goal that his predatory instincts emerge. The majority of his goals come from close range and owe to his anticipation of where the ball will be delivered. He often lets play drift ahead of him in the build-up phases before bursting into the penalty area on the blindside of his opponent to meet a low cross. 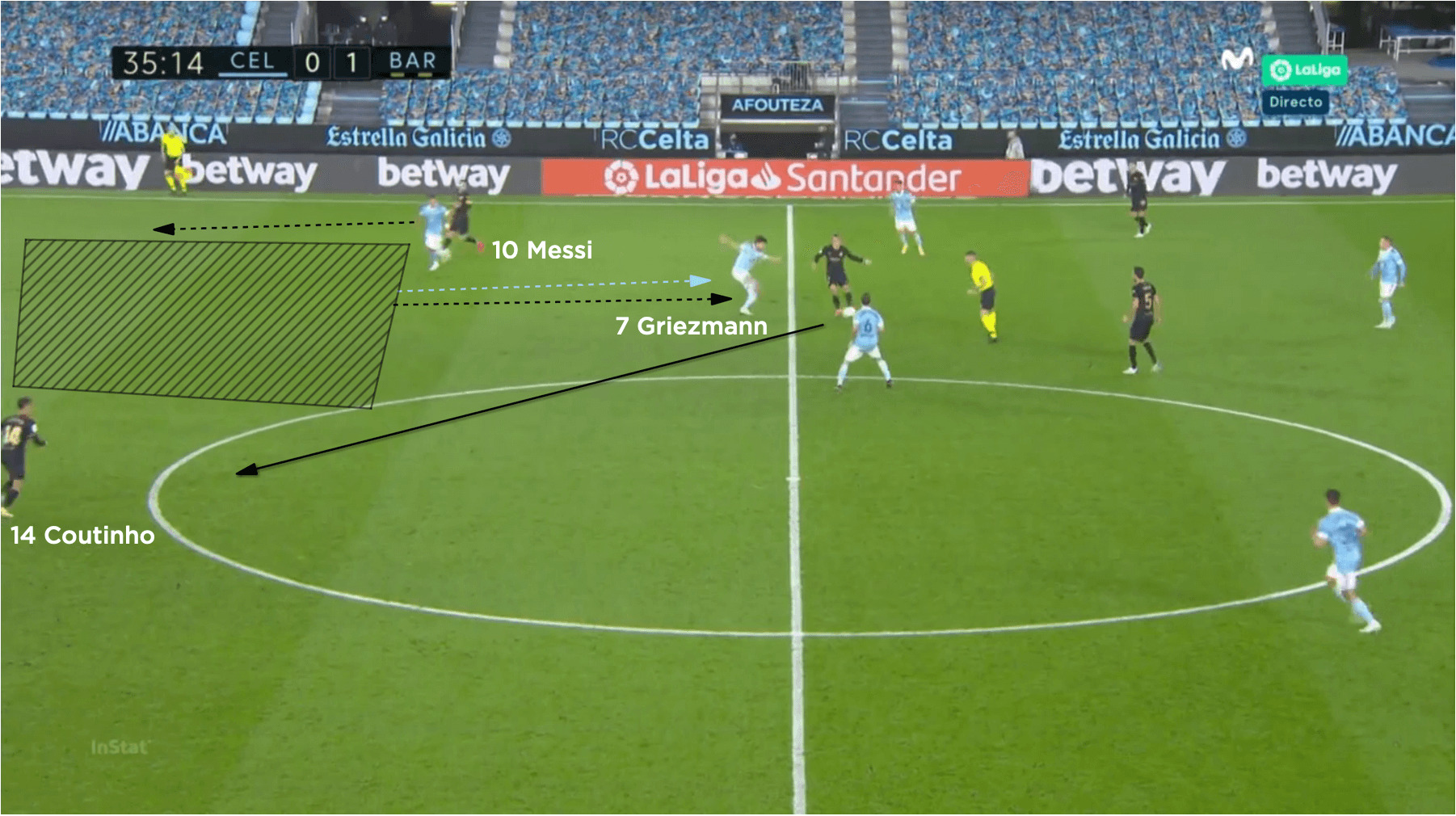 Role at Barcelona
Barça’s decision to spend heavily on Griezmann appeared a curious one when Suárez remained and was still among their first-choice forwards. Griezmann, Suárez and Messi are all versatile forwards but, with Messi’s move to the right to accommodate Suárez having helped produce some of both players’ best form, the obvious route to having all three in the same XI was to play Griezmann on the left. However, he often looked uncomfortable there and had a largely underwhelming first season at the club, scoring only nine league goals in 35 appearances despite playing alongside Messi at his creative best as the Argentinian’s 21 broke the record for the most assists in a Liga season.

Suárez’s departure for Atlético, following Koeman’s appointment as manager, meant a place on the right side of their attack, and Griezmann immediately appeared more convincing. Alongside Suárez, Griezmann spent too much time out wide and often went around the outside of his opponent to move on to his left foot; from the right he is able to turn towards the middle of the pitch and to use his stronger foot to provide a direct threat on goal. 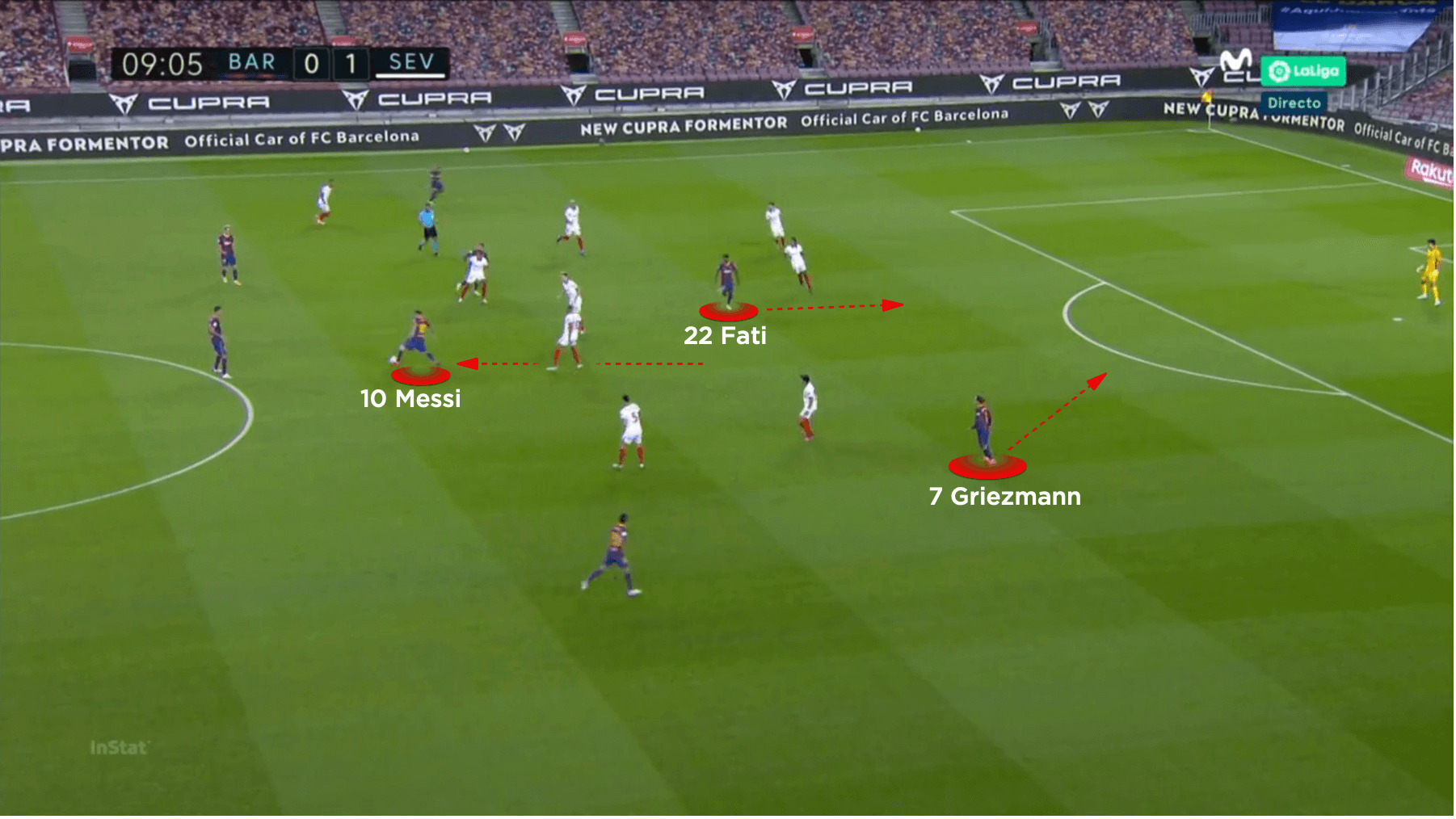 Messi is again playing through the middle, though he plays as a false nine and with freedom, and he consistently drops into midfield to create from a number 10’s position. There is lots of pressure on Griezmann and their left-sided attacker Ansu Fati to stretch the opposition and run beyond their defensive line towards goal (above). With the passing talent of Messi, Philippe Coutinho, Frenkie de Jong and Sergio Busquets in deeper positions, there is a good chance of those runs being found. Griezmann has tended to play alongside another forward who is more inclined to make that type of run while he drops deep, so he is still learning and he could still improve the timing of his runs.

In Koeman’s set-up, Griezmann and Ansu do not provide much width – that, instead, comes from their overlapping full-backs, Jordi Alba and Sergi Roberto (below) or Sergiño Dest. Roberto is encouraged to push up as much as possible and to get close to Griezmann, and they have shown a good understanding of each other’s games. Griezmann sometimes hold his position out wide to create space on the inside for Roberto to make an underlapping run, though those situations are infrequent, and it is so common that Roberto gets around the outside that Griezmann can sometimes play blind passes based on the assumption that Roberto will be making the run he expects. 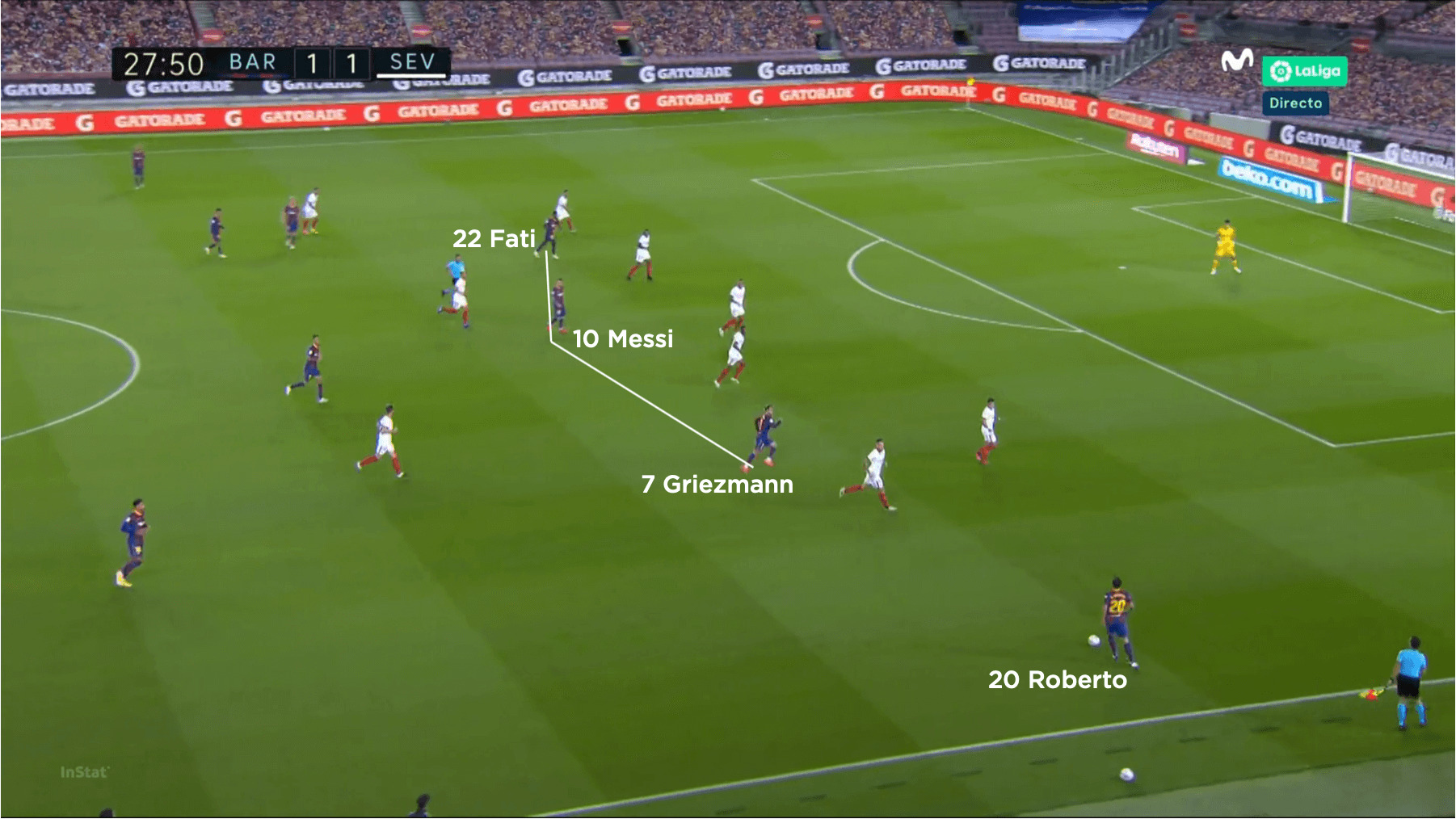 Griezmann was lethal on the counter-attack at Atlético, but Barça are so dominant in possession that chances on the break are rarer. He needs to improve his finishing to take advantage of half-chances when surrounded by opponents in a low block. He could also improve the accuracy of his final balls, given the packed defences they encounter.

The style of play of the teams in which Griezmann has shone – Atlético and France – compared with Barça meant it was always going to take time for him to settle. However, in a position that suits his game more, though perhaps not quite to the extent at his previous club, he has more chance of making his time there a success.

Barcelona’s Ansu Fati has excited since making history against Valencia, and to the extent that he may soon become their greatest asset. We assess him 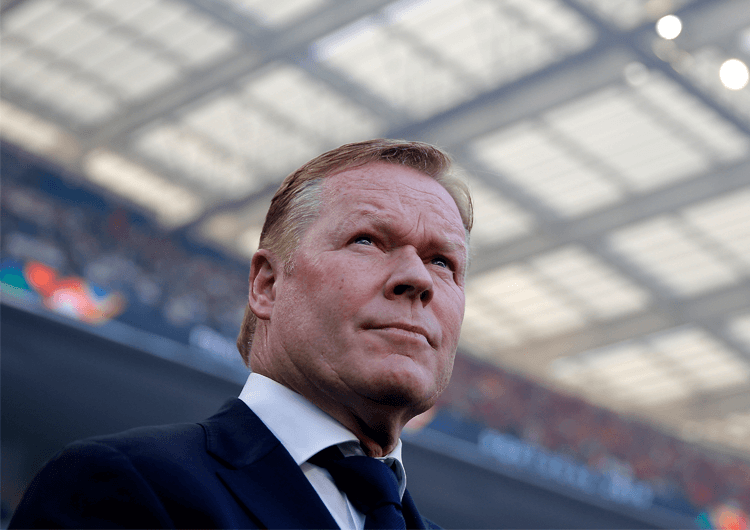 Barcelona turned to Dutch great Ronald Koeman when appointing a new manager to replace the departed Quique Setién. We assess his coaching philosophy