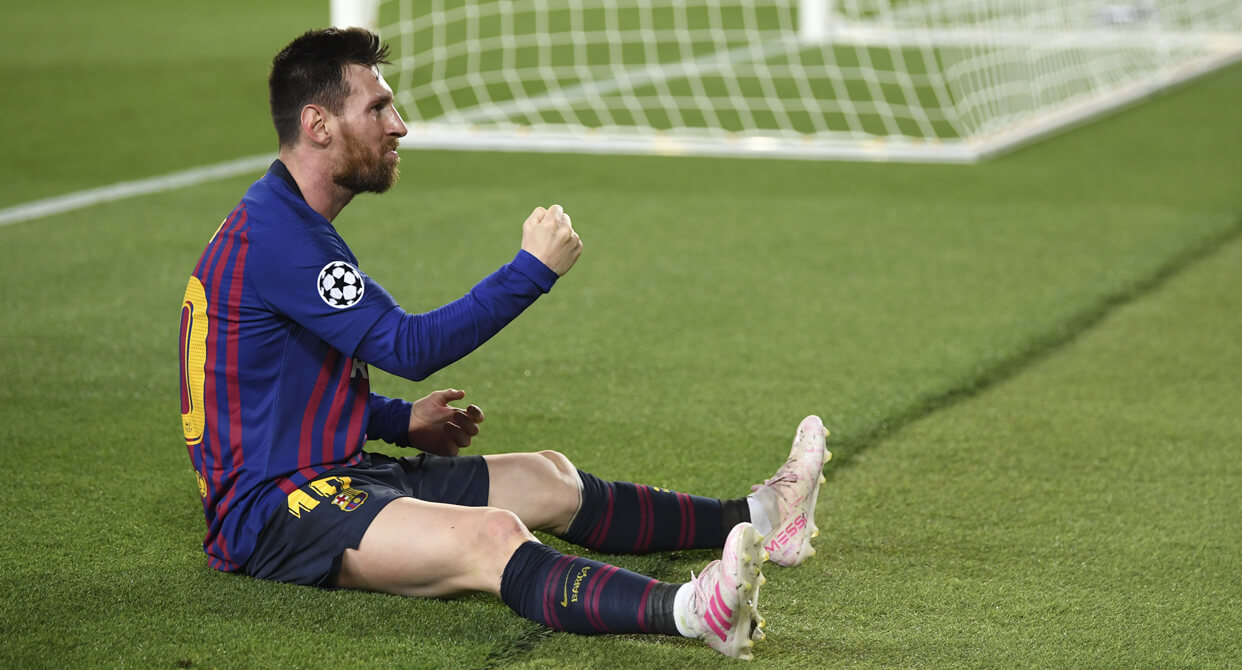 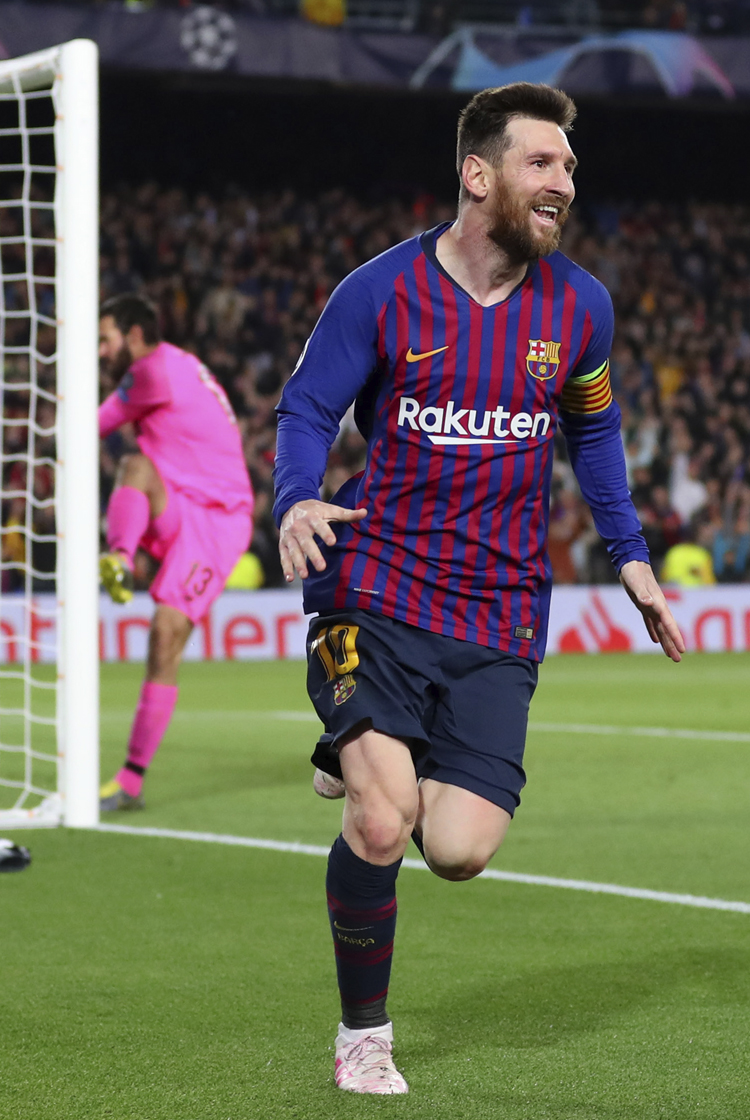 Lionel Messi once again excelled, recording a further two goals to take his total for Barcelona to 600, as they convincingly overcame Liverpool to leave their opponents at risk of elimination from the Champions League. Jürgen Klopp’s team, pursuing a place in a second successive Champions League final, were competitive for long periods of a thrilling encounter at the Camp Nou, but fell behind when Jordi Alba played in Luis Suárez and the forward demonstrated his composure to finish beyond Alisson. If at one-goal down the visitors always looked capable of finding an equalising goal, both Sadio Mané and James Milner missed fine opportunities, and Liverpool were then punished when Messi stole in to score with 15 minutes remaining. The Argentinian had a further contribution to make, which came when he curled a superb free-kick into the top left corner. 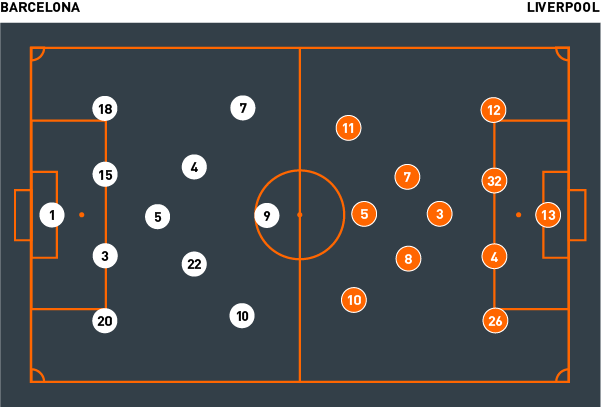 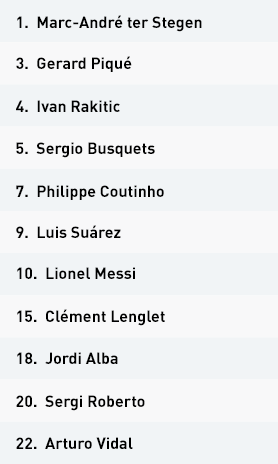 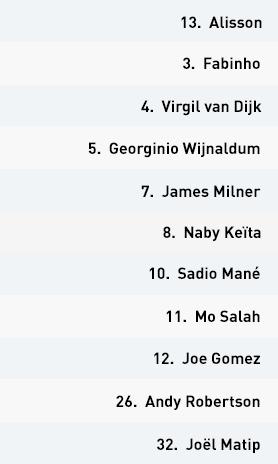 The visitors’ back line condensed to mark Barca’s tight front three of Philippe Coutinho, Luis Suárez and Lionel Messi, meaning that much of the hosts’ play into midfield was through their advancing full-backs in wide areas. They were patient in their build-up – Coutinho’s movement inside from the left pulled Joe Gomez infield and created space for Jordi Alba to advance behind. It was from Alba's pass that Suárez stole in between Joël Matip and Virgil van Dijk to score the opening goal in the 26th minute

Despite leading, Barca’s attacking possession was rare; Liverpool pressed their short build and dominated the ball through their wider combinations. The visitors forced possession one way from goalkeeper Marc-André ter Stegen, cutting off the switch. From there, Liverpool’s central midfield marked in between two opponents, thus setting the trap out wide. As the aerial pass travelled wide, Alba and Coutinho were under constant pressure on the left. The hosts ended up searching desperately for Messi or Suárez with ineffectual forward passes.


This continued into the second half, when Barca struggled to play direct passes into their front line. Messi withdrew very deep to help orchestrate play and to create an extra passing option around the ball, but even he couldn’t link with forward runs from Coutinho and Suárez.

Busquets' guile in central territory helped Barca survive Liverpool’s dominant spell – Messi’s move to the right inside channel made use of their substitute Nelson Semedo’s overlapping runs from right-back. This also invited Suárez to play blindside of Liverpool's central defenders as they faced the ball; Messi’s through balls were gradually having an impact. The Argentinian eventually made the difference in front of goal, scoring twice; his first was a simple tap-in after Suárez’s shot had come back off of the crossbar, and his second was a superb free-kick. Unlike Liverpool, Barca took their chances.

Without the ball, the hosts formed a 4-4-2, usually in a mid-block. The distance between their defence and forwards remained relatively compact, however, and Liverpool tested the spaces that existed in behind via direct balls forward. The pace of Sadio Mané and Mo Salah posed a consistent threat – if those passes were hit diagonally across goal; Ter Stegen was alert to any between their central defenders.

Liverpool’s build proved most effective on their left, where rotations from Mané and Georginio Wijnaldum created spaces for Andy Robertson to test Barca's defence with deliveries into the penalty area. Barca's defence generally negated those crosses, however, and the second-half introduction of Semedo at right-back – Sergi Roberto moved forward into midfield, and Arturo Vidal took Coutinho’s place on the left – also strengthened them, defensively. They then withdrew into a much lower defensive block, congesting the space to limit the threat coming from Liverpool’s low crosses.

Jürgen Klopp had organised Liverpool into a 4-3-3 formation during the periods they were attacking. Georginio Wijnaldum featured as their central attacker in place of Roberto Firmino. Joe Gomez was also introduced at right-back, and James Milner and Naby Keïta supported the single pivot of Fabinho in central midfield. Keïta covered, at left-back, Andy Robertson, who was pushed forward to attack the spaces in behind Arturo Vidal. Sadio Mané then moved inside to create another passing option ahead of his central midfielders, which also created spaces for Robertson to move around Barcelona’s defensive block.

Wijnaldum moved away from the centre during these periods to work off of Mané’s movements, but he withdrew to towards the ball while Liverpool built, from the left, through Virgil van Dijk or Keïta, in an attempt to draw Barca's right-back Sergi Roberto into a more central position. An injury meant Keïta being replaced midway through the first half, however, and Milner moving across to the left side of central midfield and Jordan Henderson playing from the right. This contributed to a more conservative approach from Robertson, although Henderson moved wider on the right, inviting Salah to occupy more central positions around Barca’s central defence. One superb pass from Henderson fell perfectly to Mané, who was making a diagonal run from the left, but he struck over when an equalising goal looked easier.

Liverpool’s pressure continued into the second half; their pressing trap on Jordi Alba led to a number of regains on the right. Robertson again began to advance, and Joël Matip drove out from central defence to draw Barca’s midfielders, creating more space between the lines that Mané withdrew into to create even more space for Robertson to overlap.


Their threat from both wings was demonstrated when Salah cut back for Milner, who shot straight at Ter Stegen, but they couldn’t take their chances. They subsequently struggled to break through Barca’s increasingly lower block, and conceded a third goal in Messi's free-kick. Rakitic’s superb clearance off the line, moments after Barca’s third goal, then fell to Salah, who hit the post from the kindest of positions.

Liverpool also maintained their 4-3-3 while they defended, when their attack focused on Barca’s back three. The hosts’ central midfielders received passes between this first line of pressure, but with Liverpool’s back line so compact, horizontally, their central midfield had to mirror this, creating more space for Barca’s advanced full-backs, particularly Alba on the left.

Milner initially moved to the right to assist in covering Alba’s advances, and Fabinho and Keïta prioritised Ivan Rakitic and Arturo Vidal. If this led to an increased spell of possession midway through the first half, Liverpool also slowly moved into a mid-block, and Barca took the lead. A switch of play found Philippe Coutinho, who set back for Alba to tease in an early ball for Luis Suárez, who broke in between Liverpool’s static central defenders.

Liverpool’s strategy to force play one way, restrict central midfield and then trap the remaining full-back continued, and worked effectively deep into the second half. Their regains in wider territory not only stopped Barca from playing out, but also helped them attack using Robertson and Henderson. Lionel Messi’s deeper position eventually helped Barca to secure more possession in Liverpool’s half; Roberto, Suárez, Alba and Vidal ran ahead to attack in behind the visitors’ defence. In the end, Messi’s link between midfield and attack – plus two mentally draining goals – secured an intimidating first-leg lead for the hosts.