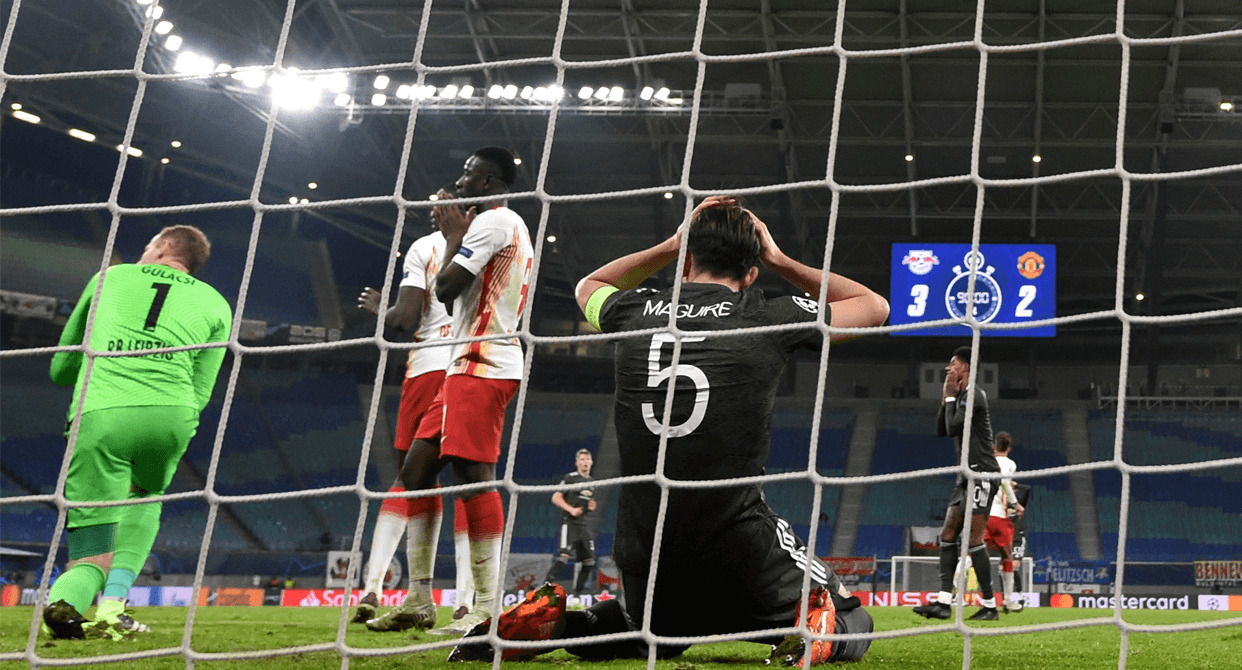 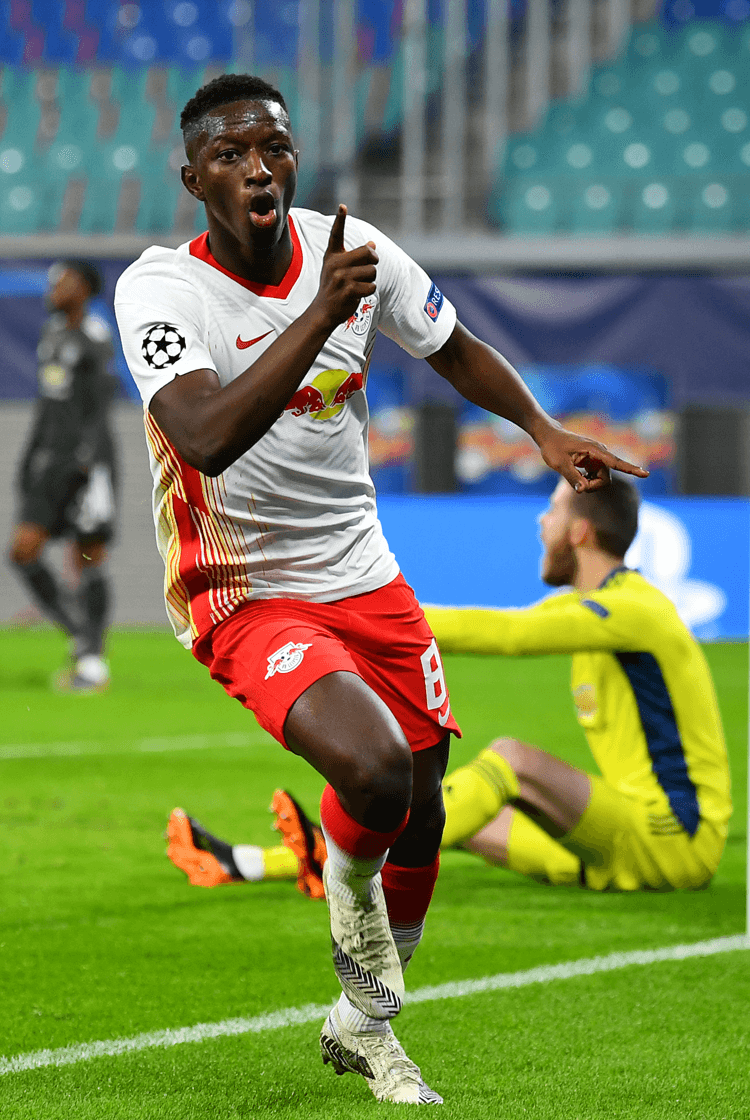 Manchester United were eliminated from the Champions League when the 2019/20 semi finalists RB Leipzig convincingly beat them to secure first place in Group H, and to progress to the knockout stages alongside Paris Saint-Germain. Ole Gunnar Solskjaer's team needed only a draw to go through, but they conceded twice in the opening 13 minutes, when Angeliño and Amadou Haidara scored. Willi Orban had a finish ruled out for offside later in the first half, but Leipzig went 3-0 up in the second when Justin Kluivert scored amid some confused defending from Harry Maguire and David de Gea. Bruno Fernandes' penalty, and the own goal scored by Ibrahmia Konaté, ultimately proved little more than consolations. Solskjaer's post-match press conference was largely focused on comments made by Mino Raiola, the agent of Paul Pogba, about the midfielder's future. “As soon as Paul’s agent realises this is a team sport and we work together, the better," Solskjaer said. "That’s probably the last thing I’ll say about that. I don’t want to spend energy on that." Nagelsmann said: "It was a very intense final minutes of the game. We played a good game for a long time. The boys are machines, they showed that again." 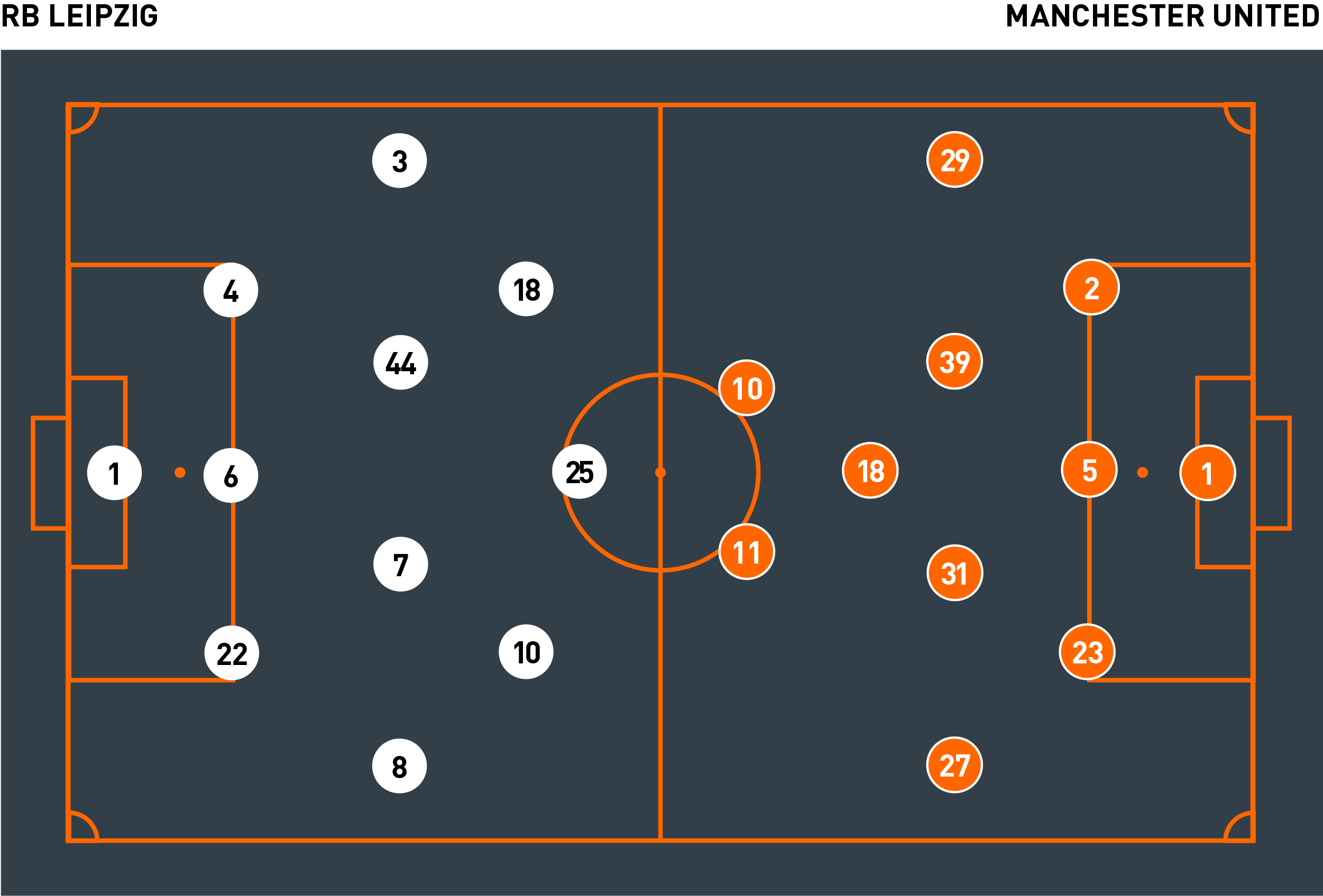 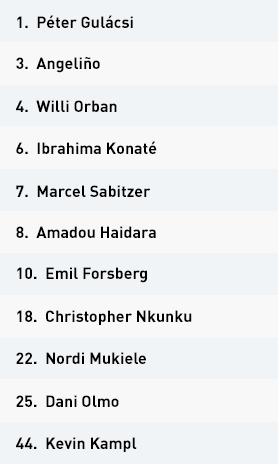 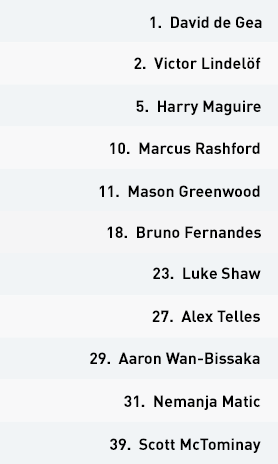 Julian Nagelsmann set RB Leipzig up in a 3-5-2 formation led by the front two of Emil Forsberg and Dani Olmo. Their visitors, Manchester United, defended with a 5-2-3, via Aaron Wan-Bissaka and Alex Telles withdrawing into defence.

United sought to press their opponents via Bruno Fernandes taking Kevin Kampl and Marcus Rashford and Mason Greenwood working to occupy Leipzig's back three. Ibrahima Konaté sought to draw Fernandes away from Kampl before playing the ball to a wing-back or wider central defender and then to Kampl, progressing beyond the first line of United's structure while doing so. That United – particularly their central midfielders Scott McTominay and Nemanja Matic – moved too far to cover if possession was on one side of the pitch meant that Leipzig played diagonal switches of play to the opposite wing. One such switch led to their opening goal.

It was United's narrow structure, and their attackers' positioning, that ultimately encouraged those switches. When the ball was on one side of the pitch, the furthest United attacker remained with Leipzig's furthest central defender; if that gave them a counter-attacking option and prevented their hosts from circulating possession in defence, it left them more vulnerable in midfield, from where they were punished.


Forsberg and Olmo also withdrew into midfield to create overloads there and to test the positioning of United's three central defenders – and their willingness to follow them there. United also defended poorly when possession was wide. Their defensive line was guilty of offering closed body positions that meant that they saw only the ball and not their opponents, who capitalised when attacking crosses.

Matic and McTominay similarly offered insufficient protection from midfield, contributing to United's wider central defenders being drawn into a wider position to track runners, and by extension leaving spaces in the centre of the pitch, where those midfielders struggled to track runners into the penalty area. That lack of compactness and protection meant that three preventable goals, which came from wide deliveries, were scored.

Manchester United were organised by their manager Ole Gunnar Solskjaer into the 3-4-1-2 formation he regularly favours against their highest quality opponents; Marcus Rashford and Mason Greenwood formed their front two, and were supported by Bruno Fernandes. Their hosts, RB Leipzig, pressed with a 3-5-2, and adopted a 5-3-2 when instead defending with a mid-block.

United struggled to play through Leipzig's defensive setup, and not least because they lacked creativity. They targeted playing passes to the feet of Fernandes, Rashford and Greenwood, but all three received under pressure and when penetrative movements weren't being offered elsewhere. Longer passes into the channels, for their front two to pursue, were also attempted, but Leipzig were comfortable defending against them.


Later in the first half the visitors recognised that they could create a free man in midfield if they switched possession across their back three to tempt Marcel Sabitzer to press one of their wider central defenders – potentially Matic dropping into that position so that Shaw received while wider. But if they succeeded in progressing beyond the first line of Leipzig's press, they still posed minimal attacking threat in the final third. Leipzig applied intense pressure to the ball when United moved it into the wide areas of the pitch – they flooded those areas with numbers to try to force a mistake, in the knowledge that they could switch play if transitioning into an attack.

United reorganised into a 4-2-3-1 and introduced Donny van de Beek – he replaced Telles and featured as their left-sided wide forward – for the second half. They therefore had an additonal point of attack, which gave them increased attacking potential, and complemented that by offering more forward runs off the ball and quicker, shorter passes.

Quality goalscoring chances regardless continued to elude them, but the front three of Rashford, Greenwood and Van de Beek continued to moved to towards the ball, and increasingly had teammates around them with which whom could combine. Paul Pogba was also brought on, and offered increased technical quality over Matic, who he had replaced. Their second-half approach would have given United an increased chance of victory had they used it from kick-off, but it would also have risked the defensive solidity they sought against opponents who relish space.