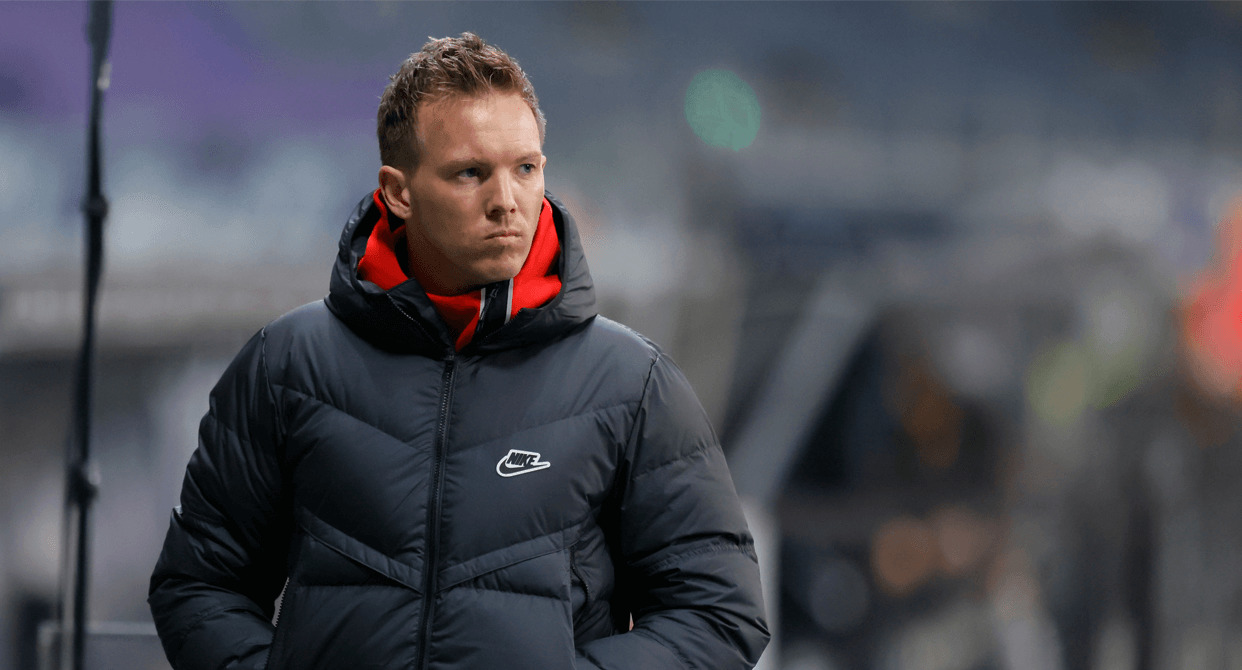 Profile
Julian Nagelsmann was only 28 years old when Hoffenheim made him the Bundesliga's youngest ever head coach. To provide further perspective he was only 16 when in 2004 José Mourinho, who he has often been compared with, inspired Porto to win the Champions League, and was born in 1987, the year after Sir Alex Ferguson was appointed manager by Manchester United.

Nagelsmann has been heavily influenced by the pressing philosophy of Ralf Rangnick, who was influential in RB Leipzig recruiting him from Hoffenheim in 2019. He was also once coached by Thomas Tuchel, who was overseeing Augsburg’s second team when the then 20-year-old Nagelsmann suffered the knee injury that ended his playing career. Tuchel first asked him to start scouting opponents, and later appointed him the coach of 1860 Munich's under-17s.

"Thirty per cent of coaching is tactics, 70 per cent social competence,” Nagelsmann once said of his approach to the most demanding of jobs. "Every player is motivated by different things and needs to be addressed accordingly. At this level, the quality of the players at your disposal will ensure that you play well within a good tactical set-up – if the psychological condition is right."

Playing style
Germany’s Nagelsmann is an innovative coach recognised for his willingness to experiment with new technologies and data in his pursuit of improvement, both as a manager and for his team. While at Hoffenheim a giant screen was erected at the training ground, and used to contribute to attempts to correct player and unit positioning as training was unfolding, and without requiring lengthy pauses to the relevant training sessions. Those training sessions are known to remain dynamic, and to take place at a high tempo.

While still at Hoffenheim, he regularly tweaked a mostly attacking system that largely represented a 3-5-2 formation while they had possession, and a 3-4-3 or 5-3-2 during the periods they were having to defend. His three central defenders were responsible for building possession – Kevin Vogt, in particular, was given responsibility for playing the ball into the areas that encouraged more passing options, and to progress that possession. From central midfield Florian Grillitsch protected their central defenders, covered Hoffenheim’s wing-backs when they advanced, and even withdrew into defence to offer an additional figure there. Two further midfielders were positioned ahead of Grillitsch and, in combination with their forwards Mark Uth and Serge Gnabry, created a square structure encouraged to continue progressing possession and in which they offered supporting attacking runs.

With the superior squad he is overseeing at Leipzig, Nagelsmann's favoured approach has evolved. If his team's basic structure is the 5-2-3 from which they seek spaces to play the ball, they demonstrate similar principles to those witnessed within Hoffenheim's 3-5-2 (below) and 3-4-3.

Increased rotations through the central lanes have contributed to them offering a greater variety of penetrative movements behind opposing defences; until Timo Werner's departure, he provided, often from a front two, the majority of those movements and was supported by secondary runs; his strike partner would also often drop into midfield to hold play, feed teammates, and stretch opponents. Since Werner's move to Chelsea, the identity of their most advanced attacker has increasingly been fluid, and from what has also sometimes become a 4-2-3-1.

There also exists an increased variety both when they are building possession and when they are attacking. Their wing-backs – most consistently Angeliño from the left, and Nordi Mukiele from the right – initially move to provide their attacking width, but Leipzig's increased focus on central rotations (below) means that they later move infield to attack alongside their most advanced attacker. When they do so cover is provided by a central midfielder, and the most advanced central midfielder withdraws into a deeper position to create the potential for rotations through both the inside channels and wide areas; further rotations occur between their central striker and those offering supporting runs.

Opponents regularly respond to the numbers attacking in those areas by defending them with similar numbers, in turn leaving them vulnerable to Leipzig attacking around them with increased width before working possession back infield. If the rotations made by their attacking midfielders are similar to those seen at Hoffenheim, further rotations are offered from those positioned deeper in midfield and, strengthened by the versatility of Marcel Sabitzer, Dani Olmo, Emil Forsberg and more, Leipzig's attempts to build possession and create in the final third isn't compromised.

Defending and pressing
Where Leipzig previously pressed with a front two, they are succeeding in pressing with a lone striker who is supported by two attacking central midfielders taking opponents behind him at the base of midfield. The first line of their press has become less effective at blocking access forward, but an improved press exists behind that first line, and the aggressive positioning of their wing-backs means that opponents are encouraged to build short, where they are then often sent into a wider pressing trap.

If possession remains central, one of Leipzig's deeper-positioned midfielders advances to support behind the two already further forwards, creating a diamond structure (below) that is not only difficult to play through, but that can contribute to overloading opposing midfield threes and to secondary pressure being applied to central defenders and goalkeepers. After allowing passes out from goal-kicks to be played under reduced pressure, those in defence then advance as high as possible so that that diamond has less ground to cover.

If possession is instead being built in wider areas, that diamond drifts in the relevant direction, and the far-side wing-back moves infield to form a double pivot with the spare defensive midfielder behind that diamond – which also moves to support individual presses being applied by either wing-back. Attacks that continue along the touchline are, in turn, defended against by the relevant wing-back, the closest attacking midfielder, and potentially the nearest central defender, when a further midfielder will also move across to cover and the far-side wing-back either moves into midfield or to operate at full-back.

Should that mean they become vulnerable to switches of play, the distance the ball is required to travel gives their pressing unit time to move across. Nagelsmann has encouraged a higher press, led by those numbers in central areas, throughout 2020/21, and he has been rewarded with an increased number of regains in the attacking half and attacking third. A further consequence is that opponents are often forced to attempt long balls over that press, leading to battles for second balls, and therefore Leipzig having to be organised in preparation for those battles – something that is particularly common against technically inferior teams.

They have been seen both directly and indirectly, when they have a numerical advantage over their opponent, pursuing second balls. When an individual duel is lost those closest to the ball are in a position to respond and potentially recover it, when the favoured pattern involves a safe pass, followed by the start of a swift attack. What that also means is that against technically gifted teams capable of playing with a high tempo – particularly during build-up phases of play – they can encounter problems. If their timing is not as it should be, any attempts to apply their press can then be ineffective.

Nagelsmann regardless continues to show a willingness to organise his team into a different shape if the relevant fixture demands it, and, on the occasions they don't succeed in regaining possession in advanced areas, their priority becomes preventing opponents from carrying it through central channels by reducing the spaces in those channels.  That they have such confidence in their press means that they consistently approach applying it with an impressive level of energy and coordination.