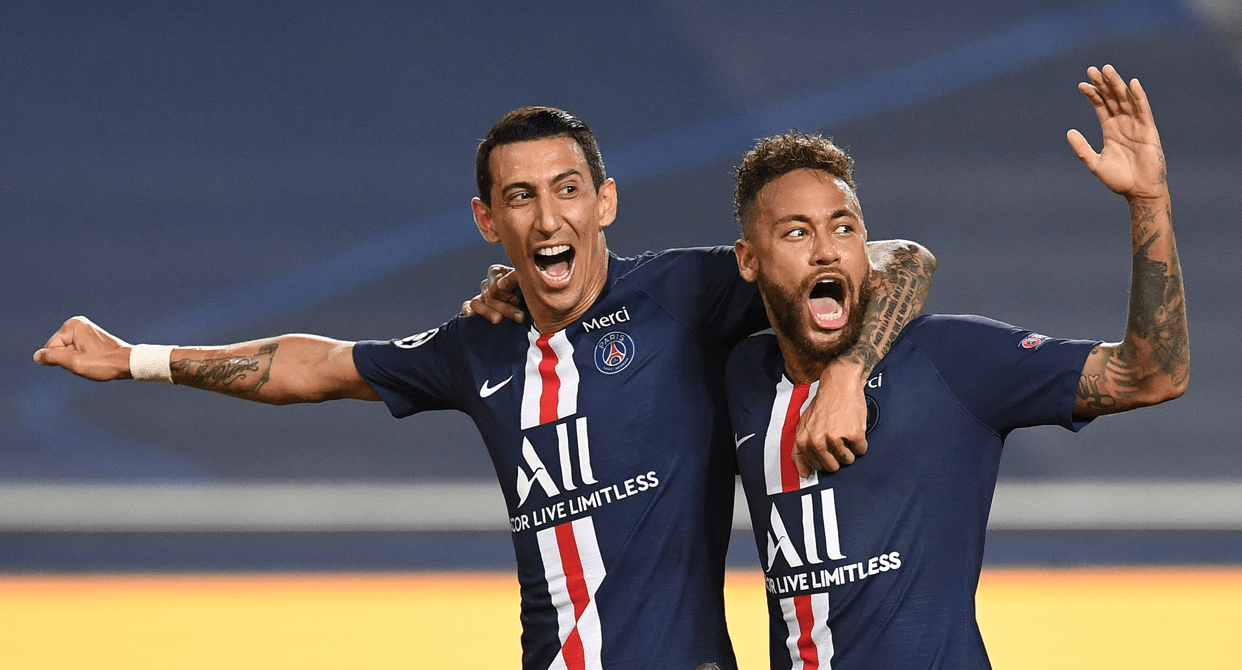 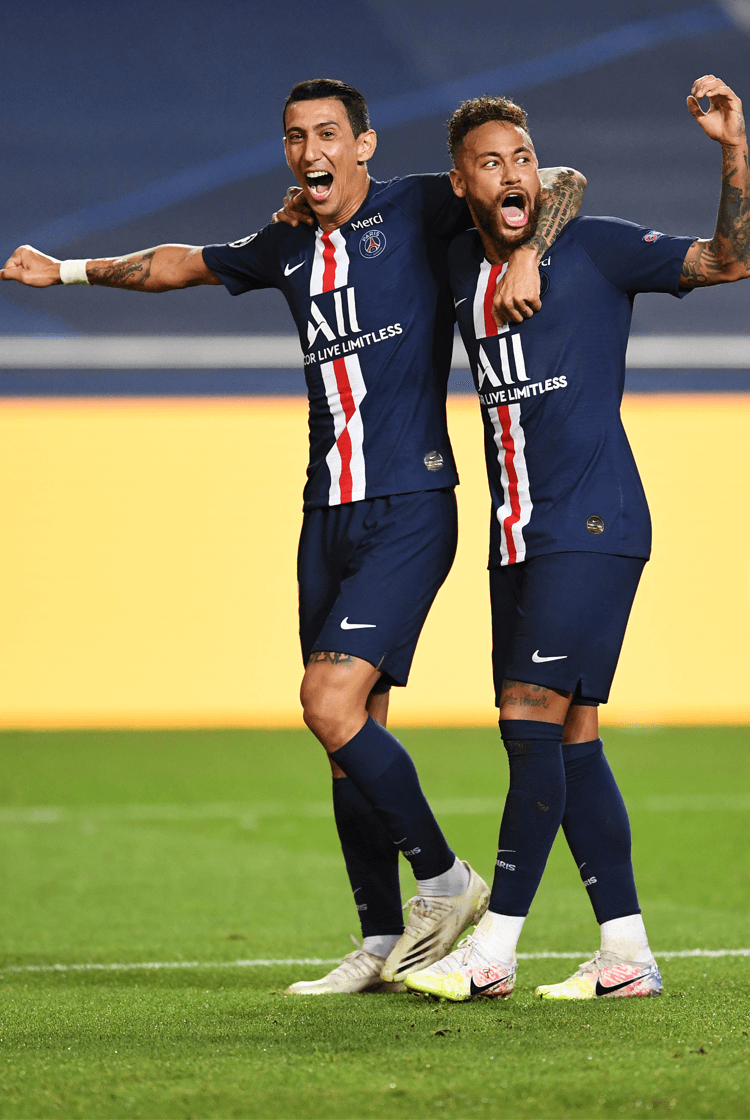 Paris Saint-Germain reached their first ever Champions League final at the expense of RB Leipzig reaching theirs after securing a convincing semi-final victory over their opponents. First-half goals from Marquinhos and Ángel Di María, and another in the second from Juan Bernat, gave Thomas Tuchel’s team command against Julian Nagelsmann's in the encounter between the two widely-admired German managers. They will next meet either Bayern Munich, managed by a further admired German coach in Hansi Flick, or Olympique Lyonnais. "We stayed faithful to our style of play," said Tuchel. "When possible, we looked to control the half-spaces and control their counter-attacks, and we used the acceleration of Ángel, Kylian and Neymar with the ball between the lines." 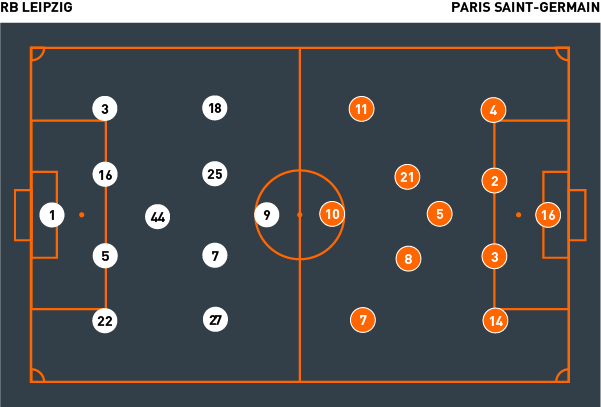 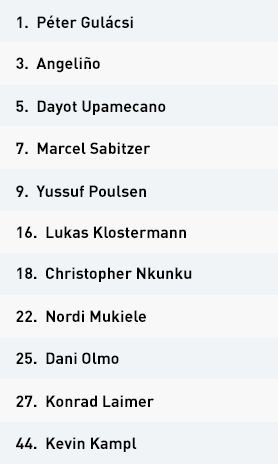 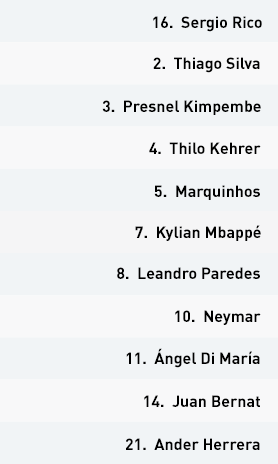 As has sometimes been a feature of Julian Nagelsmann's management, RB Leipzig used a variety of formations, and on this occasion their most common was a 3-1-5-1. Paris Saint-Germain defended with a more familiar 4-3-3.

Leipzig sought to build from the back, and offered a different structure in open play to that used at goal-kicks, when Dayot Upamecano would move to alongside Kevin Kampl to form a double pivot and Nordi Mukiele withdrew into central defence, ultimately forming a 4-2-4 with the intention of creating two-on-ones in wide areas against an opposing midfielder. PSG attempted to apply an aggressive press, via their front three and the ball-side central midfielder, at those goal-kicks, and when their efforts eliminated the option of passing to the three nearest players, Leipzig had little choice but to clip longer passes or risk mistakes, as was witnessed when they conceded their second goal and when PSG had a further effort disallowed.

When they had a more solid grasp of possession, Mukiele, Upamecano and Lukas Klostermann combined to form a line of three, and Angeliño advanced to operate from midfield. Nagelsmann's team sought to build via diagonal passes beyond PSG's front three, and followed those with a second pass, backwards, towards a forward-facing receiver who would then continue to progress possession. Those moves were also complemented by players adopting wide and central positions and in the half-spaces, and Yussuf Poulsen withdrawing towards possession to receive.

Play therefore often moved wide, from where Leipzig were in position to cross, but they played straight balls instead of bending them in behind PSG's defence, and their attacking players didn't capitalise on them. In the earliest phases of their build-ups, Leipzig had also sought to circulate possession in defence, and Upamecano was central to their attempts to do so, through playing diagonal passes into half-spaces from central defence.


The changes they made at half-time involved them adopting a 3-5-2, Konrad Laimer and Angeliño advancing to operate as wing-backs, and Patrick Schick joining Yussuf Poulsen in their front two. The structural change meant their front two remaining in positions that meant they could combine with each other, often through one stretching play while the other contributed to building possession in midfield, and to provide an improved presence to meet those crosses.

It also meant them having a more gradual build that included one of that front two combining to create a four-on-three in midfield, similar to that PSG favoured during the first half. At 3-0 up, Thomas Tuchel's team also operated from deeper territory, and focused on attacking on the counter; the protection their midfield three offered to the defence behind them also negated most of Leipzig's attempts to penetrate in central areas of the pitch. Marquinhos, particularly, was aware of his opponents' positioning, and he, Ander Herrera and Leandro Paredes remained sufficiently close together that Leipzig could only realistically make progress in wide areas. With Ángel Di María and Kylian Mbappé also contributing to their defensive efforts, the Bundesliga contenders were given minimal chance to recover.

Paris Saint-Germain were organised by their manager Thomas Tuchel into a 4-3-3 formation led by the talented front three of Ángel Di María, Kylian Mbappé and Neymar, against opponents who defended with a 4-1-4-1. The Ligue 1 champions dominated possession, and therefore had to concentrate on breaking down RB Leipzig's mid-block.

Julian Nagelsmann's team sought to engage with their opponents around the halfway line; against that, Leandro Paredes was encouraged to withdraw to in front of Leipzig's midfield block, so that alongside Presnel Kimpembe, Thiago Silva and Marquinhos they built through four players, and attacked with the six positioned further forwards.

Where Paredes typically moved to the left half-space, Ander Herrera adopted positions between Leipzig's defence and midfield. Neymar also withdrew into midfield where he often moved into a position similar to Herrera's, but towards the left, ensuring that they had an overload in the first phases of their build-up and the potential to eliminate Leipzig's midfield by accessing he or Herrera. In combination with Herrera, Marquinhos and Paredes, Neymar contributed to the formation of a rhombus shape that encouraged them to play line-breaking diagonal passes; if the pressing angle taken by the relevant opponent dictated they should, they could just as routinely instead play horizontal passes. Leipzig struggled to negate either option, and therefore to discourage penetrations through their midfield.

Those positions in midfield forced Leipzig to play with a higher defensive line, which in turn meant Mbappé, largely operating as their left-sided attacker, having increased spaces to attack – spaces Paredes and Kimpembe often accessed with clipped passes. They built differently towards the right, where Herrera remained between the lines and Di María operated as a wide attacker and where, with Thilo Kehrer, they used a variety of triangles and rotations to advance.


For all of the options they were increasingly effective with, their goals came via different methods – after a blocking exercise at a set-piece, through a high-intensity press, and from an uncharacteristic defensive error by their opponents. Tuchel will be aware that they cannot rely on repeats unfolding in the final.

Leipzig reorganised into a 5-3-2 during the second half, through Patrick Schick joining Yussuf Poulsen in a front two and Emil Forsberg replacing Christopher Nkunku. Their change in shape meant them pressing PSG's defence with a front two and their three midfielders pressing in a man-oriented manner, preserving their back five and ensuring that the spaces that previously existed behind them were being protected and that the movements being attempted between the lines by PSG's players were defended against.

If PSG had opportunties to attack on the counter, they were guilty of wasting them. Their pass selection and the detail on those passes meant that their potential during transitions was too often wasted. Against a superior opponent that will also need to improve.