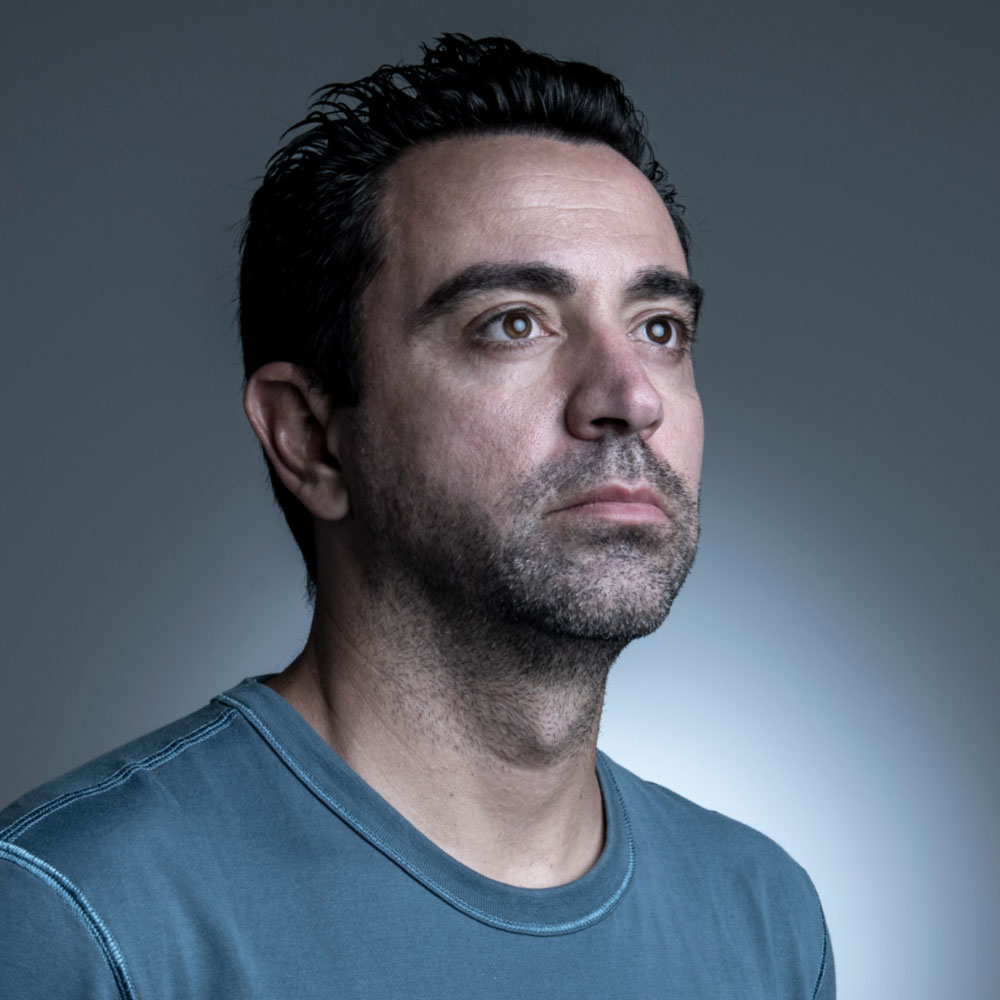 I had the good fortune to enjoy a close relationship with Johan Cruyff in the last years of his life.

I always remember something he said to me: “Xavi, the closest thing to being a footballer is coaching.”

This is the way I went. The tactical bug bit me, and so I started my coaching courses.

I had already learned a lot of things from different coaches – both from my time in the Barcelona youth team and then at professional level.

In some ways, I have been putting my ideas in order. That has led me to be able to say that I now I have my own model of play, which I try to apply. I try to convince the players that, through this path, you can play well and achieve success.

This is something that Cruyff (below) himself achieved with great success at Barcelona. As did three of the important coaches I had during my time as a player at the club.

Frank Rijkaard arrived at a time when everything began to change at the club. Joan Laporta won the presidential elections in the summer of 2003, and chose him as coach.

I could highlight many virtues about Frank. But there is one that, for me, stands out above all: his human qualities. You could feel that, emotionally, he is close to his players – comparable to how Vicente del Bosque was with the Spanish national team.

A ‘consensus guy’, as we players would say.

That doesn’t take away the fact that Frank was also direct and demanding at the same time, but he was always very level-headed. He got on well with the players and, in the end, the fact that you see your coach is a good person helps you form a group.

The first few months were not easy for him. The team wasn’t getting the results they expected, and there were doubts about him as Barcelona coach. There was even talk from outside that he could leave at any time if the situation did not improve.

Despite that, as I said, the team was a very united group – and united with the coach, too.

"We are going to give everything – first of all for the good of the team, but also for Rijkaard.”

In the dressing room, we were on the same page. We wanted him to stay with us.

Frank (below) knew how to manage a group of great players. Ronaldinho, Deco, Samuel Eto’o and Rafa Márquez joined a team that already included players like Víctor Valdés and Carles Puyol. In hindsight, the dressing room of a big team is not an easy thing to manage. He knew how to handle it perfectly and naturally.

Pep Guardiola also arrived at a difficult time, because in the previous two years we hadn’t won any important titles. For a team like Barcelona, that is only ever a bad thing.

I knew Pep from his playing days. I had been a teammate of his for several seasons. Even without talking to him as a coach, I already had the feeling that things would go well.

The feeling that the club had made the right decision in signing him.

"I ASKED PEP HOW HE SAW MY PLACE IN THE TEAM. HIS ANSWER WAS VERY DIRECT AND VERY PERSONAL"

Pep is a person who is demanding with himself, with others and, above all, obsessive in his work. No detail escapes him. He was already like that as a player, so as a coach I imagined he would be the same – along with his personality, and his ability to communicate.

The first conversation I had with Pep the coach was in pre-season, in the summer of 2008. He made the players who had just won the European Championship with Spain (below) come back earlier. We had fewer holidays, but he wanted to have the whole group together from the start to work calmly with us.

At that time, I had doubts about my future at Barcelona. Months earlier, I had heard rumours that Txiki Begiristain – the team’s then sporting director – didn’t want me in the team. He was looking for a sale.

I arrived for pre-season after a fantastic European Championship, at which I was named Player of the Tournament.

In that first conversation with Pep, I asked him how he saw my place in the team. Was he going to give me a relevant role or not?

His answer was very direct, and very personal.

“I can’t imagine the team without you.”

"WE COULD SEE BUSQUETS' TALENT – THE WAY HE KEPT THE BALL, HOW HE LIFTED HIS HEAD"

That was it for me. From then on, my head was focused on Barça. I never wanted to leave Barcelona anyway, but even less so after Pep’s words.

I was 100 per cent convinced. Just as Pep was convinced of the changes he made to the team.

His background as a player at the club earned him a lot of support to do so, but he also had the experience of being coach of Barça B the previous season.

However, it was still a surprise for us to see how he brought Pedro and Sergio Busquets in from the reserve team. These were players who had never played at the top level, but Pep knew who could perform. He had no hesitation in introducing them to the first team.

We quickly understood why.

We could see Busquets’ talent. His performance in a rondo, the way he kept the ball, how he lifted his head. With Pedro, we saw how he attacked space, his timing when coming in to receive the ball, or to give support. They were players, like others who came up later, who had learned from their time with Pep.

"WE FACED A UNITED TEAM WITH GREAT PLAYERS, INCLUDING CRISTIANO – BUT WE WERE SUPERIOR"

There were no doubts about what we were doing. Although we lost at Numancia on the first match day of the league season, and then drew at home to Racing Santander, I had the feeling that this team was going to do important things.

It was like that because of the way we trained, Pep’s demands and the way we played. I had a premonition of a Barcelona that would be spectacular.

What I never imagined was reaching the level that allowed us to win six titles in that first year, and all those that came afterwards. It is also – and maybe even more importantly so – how they were achieved. We played with absolute brilliance.

Of all the great moments we experienced, the most special for me is the Champions League final of 2009. We won 2-0 against Manchester United in Rome.

That night, we faced a United team with great players, including Cristiano Ronaldo. Cristiano himself caused us a lot of problems in the first few minutes. From then on, after stringing a series of passes together for the first time, we were far superior.

We enjoyed ourselves on the pitch.

That is also true of our time with Luis Enrique. Before the start of the 2014/15 season, I had already decided to leave Barcelona. I told the president, Josep María Bartomeu, and the then sporting director, Andoni Zubizarreta.

And I also told Luis.

"I WAS NO LONGER AS IMPORTANT ON THE PITCH AS I WAS UNDER FRANK OR PEP, BUT I WAS STILL JUST AS IMPORTANT IN THE DRESSING ROOM"

Shortly afterwards, we arranged a meeting in his office. I was going to explain to him that I would stay with the team until December. Then I was leaving for New York City, a club with whom I had an agreement.

That way, I could play until that date and then say goodbye to the fans. In the meeting, though, Luis asked me to stay for the whole season.

His words convinced me to do so. He told me that we were all starting from zero, but also that I wasn’t going to play every game. Luis was clear and direct with me, but above all he was honest. He told me the whole truth.

I left that meeting with the same feeling I had when Guardiola was signed. “This is going to be good,” I told my people.

It ended up being an incredible year. All the stars aligned so that I could say goodbye incredibly well to the fans, lifting every possible title as captain: La Liga, the Copa del Rey and the Champions League in Berlin.

I was no longer as important to the team on the pitch as I might have been under Frank or Pep, but I was still important outside and inside the dressing room.

I felt I was an important part of all the successes in that treble.

"JOHAN CRUYFF WAS RIGHT: BEING A COACH IS THE CLOSEST THING TO BEING A FOOTBALLER"

With all those experiences accumulated at Barcelona, I arrived at Al Sadd to finish my time as a player. It was a final stage that made me adapt to new situations: a new competition, and new teammates.

Also, ultimately, to take the step to becoming a coach.

Al Sadd was the right place for me to start, I think. I have learned, tested myself and gained a lot of experience. I am grateful to the club for trusting a coach who was starting from scratch, and at a big club like Al Sadd in Qatar. That is not always easy.

This time has helped me realise that Johan was right. It is true: coaching is the closest thing to being a footballer.