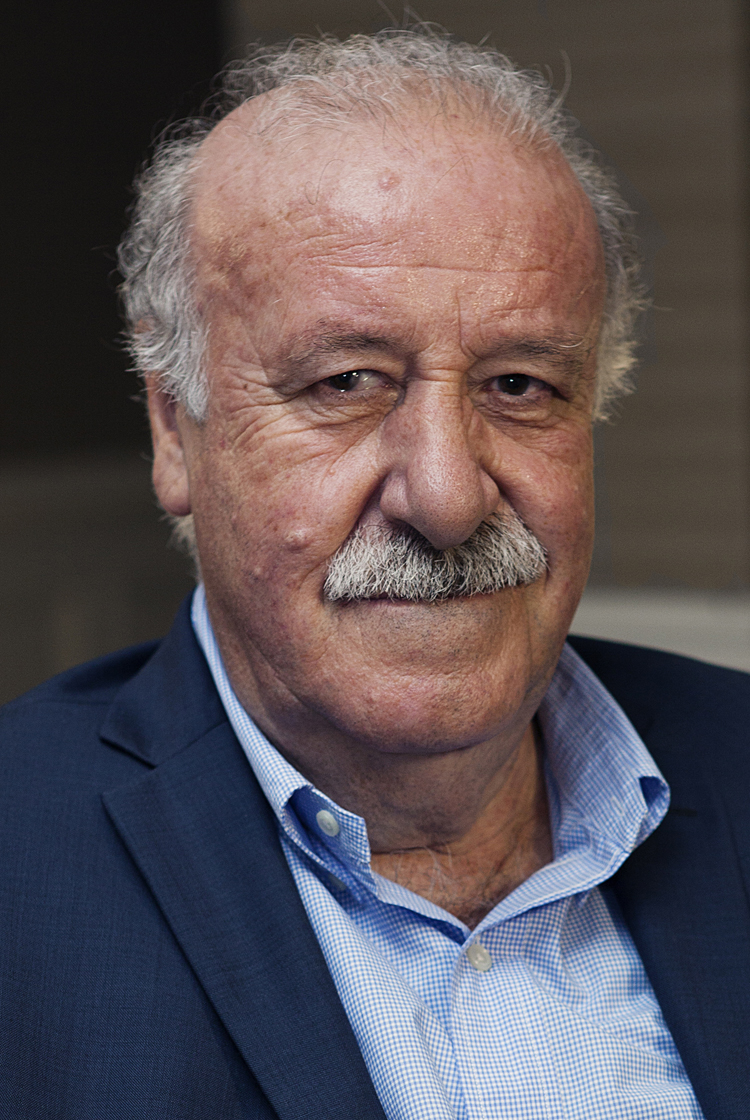 People told me it was the worst possible time to be in charge.

But I had a different view.

Spain had a very well-defined style, a great group of players, a top structure established at academy level. Many things were already on our side, and now we had become the European champions.

Receiving that legacy was not a burden. It was the cherry on top of the cake.

I knew before Euro 2008 had started that I had been given the chance to succeed Luis Aragones.

I followed the whole tournament alone at home, watching the games in a quiet place. But I had always had my own vision of Spanish football, and it was inevitable that I started to draw in my head the picture of what I wanted.

I still remember the noise when Fernando Torres scored the winning goal against Germany, and the people's celebrations after the game.

There seemed no better place to be carrying out my ideas than with this squad, and no better time than now.

"We weren't going to ignore the job Luis Aragones did. We were simply going to add new things"

Luis was a bit older than me, but we always respected each other. And I knew I could earn the players' respect by showing my appreciation of the former coach. That way, they sensed we weren't going to ignore the job he did. We were simply going to add new things.

The team we inherited had good habits, and we had no intention of vanishing the hallmarks that made them champions. Our idea was to strengthen those aspects that had worked in the past, but try to progress with caution and build another group.

Some players blossomed, and we brought new blood into the team. Changes were necessary to avoid stagnation, but players like Gerard Pique, Sergio Busquets and Juan Mata also improved the squad's quality.

The most difficult part was casting away players who had been pivotal to Spain's success at Euro 2008.

The prime example was Marcos Senna.

Senna (below) had probably been Spain's best player at the Euros. We had always rated him highly and he had enormous talent, but he was excluded from the World Cup squad despite having been part of the team in 2009. Busquets was the new big thing, and we thought he was even better.

I cannot deny it was intimidating to be considered favourites ahead of the World Cup.

Spanish football was experiencing a great moment, that's unquestionable, but there were not big differences between the top teams and there is a very thin line between success and failure.

In fact, failure is always the most likely result.

And then we lost our first game.

"I told the players that if we won the next six games, we would be champions. It didn't look difficult. It was just six games"

After the 1-0 defeat to Switzerland, a few players came to me and said: "Mister, I thought we played quite well."

They were right. I watched the game again, and I saw no reason not to persevere with our idea. No mood swings. No nerves. No radical changes.

The manager has to be coherent with his narrative. Our work had taken us where we were, and the problem could be solved. I told the players that if we won the next six games, we would be champions. It didn't look that difficult. It was just six games.

There were acidic reviews of Busquets' performance against Switzerland, but he was one of the players we trusted more.

He and Xabi Alonso were an important backbone for the team. They were not simply holding midfielders – they did everything. They played the ball and they built our game, but they also reached the opponents' box.

We cannot forget the likes of Iniesta, Xavi, Villa, Torres and all the players we had in the squad. But we built the team around the Busquets-Alonso partnership.

As the tournament progressed, an optimistic feeling settled in the players' minds. They really believed they could be world champions.

And we followed our usual game plan. The only player we put an extra focus on was Philipp Lahm, who was pivotal to Germany's offensive game, in the semi final.

We didn't employ an extra defender to control Lahm's offensive runs, though. Instead, we decided to start Pedro, meaning Lahm would have to be more vigilant. Pedro's freshness turned out to be very beneficial to the whole team, and we won 1-0.

Now we were going through a historic moment for our players and the country. We were one step away from our target, of being champions of the world.

Many generations in the past had tried and been unsuccessful, but we had to alleviate the drama. In the days building up to the final, we were nothing more than footballers willing ourselves to be the best we could.

"We reminded the players that we were not soldiers. It was a World Cup final, and they must enjoy the game as footballers"

On the day itself, I got up ready to prepare for a game as usual. I had no worries about the emotional aspect of the day. It was a World Cup final. It would have been impossible to inject any more emotion into my players.

My staff and I reminded them that we were not soldiers. Many youngsters in Spain would give anything to be in their boots, and they must enjoy the game as footballers.

All the players were young but mature. Cesc Fabregas, to name one, had been Arsenal's captain from a very young age. The majority all had long careers behind them. That made us confident.

The Netherlands had very experienced players in their squad. It was the third time they had reached a World Cup final, which meant a lot for a country that had never won the tournament. I would like to remember them for their technique and style.

As a coach, I am loath to look for solutions that are not in our hands. Instead, at half-time, we focused on our strong points and our biggest challenges, such as Arjen Robben's speed or Wesley Sneijder's playmaking. We focused on the Netherlands' potential and refused to talk about the referee.

When the game went to extra time, I was confident that we would win.

Jesus Navas was our secret weapon. Spain hadn't been used to playing with wingers when we took over, but we knew his speed on the right would be difficult to handle for Gio van Bronckhorst, who had already played 90 minutes and was playing his last ever game.

When Andres Iniesta finally scored, I felt we were very close to achieving our dream. But the first thing on my mind was Slaven Bilic.

At a managers' summit after Euro 2008, Bilic had admitted that, in Croatia's quarter final against Turkey, he spent too much energy celebrating his side's goal instead of making sure he worked out tactics for the remaining seconds of the game.

Soon after, a Turkish player blasted the ball into the top corner – and Turkey went on to knock the Croatians out.

So, in that moment, Bilic's anecdote had an impact on me. There were four minutes remaining. Even against 10 men, we had to be cautious, to avoid celebrating. We had to stay strong for four more minutes.

I don't know if we slept a lot that night. Probably not. To begin with, I don't think we were aware of our victory's repercussions in Spain. As the hours went by, we started to realise that winning the World Cup was a fantastic achievement for our country.

Me? I celebrated with everyone. But I am not the kind of person to go over the top. Win or lose, I take pride in keeping a cool head.

People still remind me of the World Cup, but I try not to take too much delight in the past. We do not dwell there. We always look to the future.