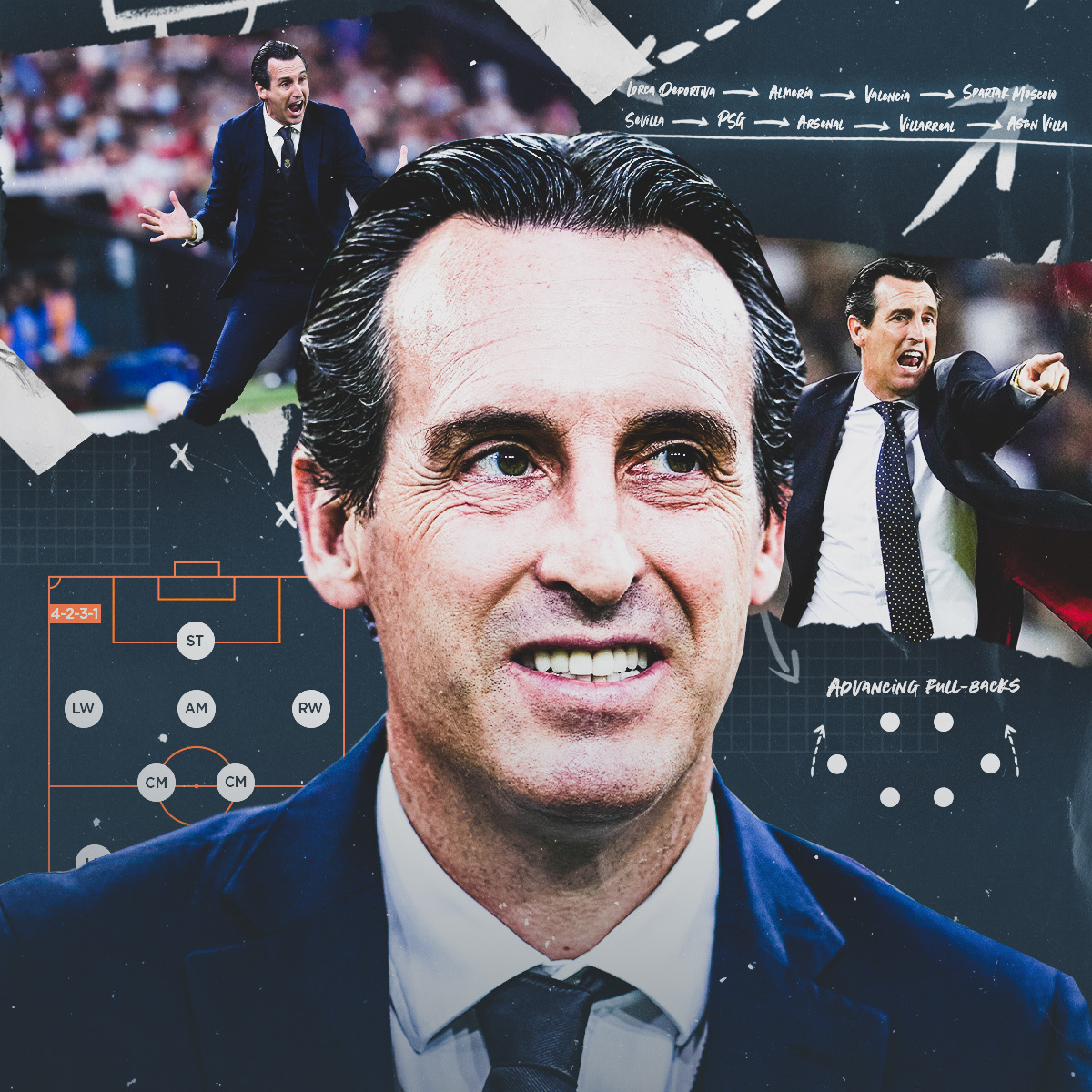 Profile
Unai Emery built his reputation in La Liga and Ligue 1 before moving to join Arsenal, who he left six months after guiding them to the Europa League final, and then returning to Spain with Villarreal. A manager accustomed to building teams with both limited and near-limitless budgets, he is also recognised for his exceptional ability in negotiating the Europa League, which he has won a record four times. Six months after leading Villarreal to the Champions League semi finals in the 2021/22 season, Emery was announced as the new head coach at Premier League Aston Villa in October 2022.

Edinson Cavani, who worked with Emery at Paris Saint-Germain between excelling under a variety of managers in Serie A and the Premier League, said of the Spaniard: "From the moment Unai arrived at Paris, he showed his passion for football. I really liked his way of working. It’s the small details that determine these kinds of games; they are won in the small aspects, and for that you need to be very focused. He’s a hard-working coach and that is why he has won titles, trophies, wherever he’s worked."

Playing style
Emery has long most commonly favoured a 4-2-3-1 formation, though there have also been occasions he has preferred a 4-4-2. With both systems his team's ability to attack is led by their central midfielders, and the double pivot so often used. At Valencia, David Silva and Éver Banega were influential where at Sevilla, it was Stéphane M'Bia and Daniel Carriço and at Arsenal, Mattéo Guendouzi and Granit Xhaka. Most recently, Dani Parejo and Étienne Capoue or Francis Coquelin have become crucial at Villarreal.

Valencia and Sevilla both largely employed a counter-attacking 4-2-3-1, but featured the players required to, when necessary, dominate possession via a 4-4-2. Sevilla offered direct play, in wide territory, to progress possession, and partly because of the aerial authority and off-the-ball runs made by M'Bia and Vicente Iborra.

Ivan Rakitic, José Antonio Reyes and Vitolo often combined to support Carlos Bacca (above), their leading striker who attacked defenders with his power and speed. By Sevilla quickly progressing the ball into attacking territory, Bacca's ability to attack one-on-one, and the rotations that existed between Rakitic, Vitolo and Reyes – one moved wider, without the ball – offered significant potential.

Paris Saint-Germain most commonly used a 4-2-3-1 and 4-3-3, largely owing to the presence of those – Cavani was prominent among them – who favoured vertical attacks. Their back four's defensive strength, and the work ethic of Thiago Motta, Adrien Rabiot and Marco Verratti, enhanced both their ability to link play to those in the attacking third and the potential of Emery's favoured attacking transitions.

During their lengthier periods of possession – they were regularly dominant against domestic opposition – Emery often favoured a 4-3-3 (above) in which his defensive midfielder would withdraw into central defence, encouraging their full-backs to advance, and their front three to adopt a narrower shape and to rotate.  One of his attacking midfielders moved to provide a shorter passing option from defence and into attack; the other provided a further run behind their front three.

When he first arrived at Arsenal, they, too, sought to attack with speed on the counter, and like PSG to, when necessary, retain possession. Xhaka regularly withdrew into a deeper position (below) from his starting role in midfield, in an attempt to both draw opponents to follow him and to progress possession. To get the most from Pierre-Emerick Aubameyang and Alexandre Lacazette, they also offered the variety of selecting two strikers. The latter withdrew into a deeper position to link play when they countered through the centre of the pitch and to stretch their opposing defenders, in turn encouraging Aubameyang to attack with pace, perhaps similarly to Bacca at Sevilla.

A further approach involved Hector Bellerín driving infield from right-back to draw opponents away from those who offer so much potential in the centre – Lacazette and Mesut Özil both benefitted by receiving in increased spaces before switching play or feeding those making forward runs. If they were instead attacking via lengthier periods of possession, and therefore resembling Valencia and Sevilla, they reorganised to attack with two wing-backs ahead of a back three (below); Xhaka held his central position, and Guendouzi made forward runs to support wider attacks, enhancing their potential in those areas and offering cover against potential counters.

Villarreal have more consistently been organised into a 4-4-2, in addition to Emery's long-favoured 4-2-3-1. With either system they attack with numerous players in a narrow shape, and their front two – two of Bacca, Gerard Moreno and Paco Alcácer – work to occupy their opposing central defenders, often encouraging counters via a striker withdrawing into a deeper position and the closest wide player providing a forward run and in behind, to preserve their front two.

If a more sustained period of possession is unfolding, Villarreal's full-backs advance, and their wide midfielders move infield to support either their two central midfielders or front two. Should Manu Trigueros be one of those wide players, he adopts a slightly withdrawn role (below) to provide support via his passing range, instead of via direct runs.

Defending and pressing
Emery's teams typically adopt high defensive lines in an attempt to play possession and defend away from goal, increasing their emphasis on an aggressive press, and to minimise spaces between the lines to enhance not only their defensive strength, but their ability to transition into counter-attacks via the spaces they can create. If a high defensive line is impractical or an opponent has progressed beyond their higher pressure, Emery will instead organise his players to defend with a mid-block. The double pivot he so regularly relies on provides cover in front of his central defenders, who are often capable of defending both as individuals and as a pair.

Sevilla's defenders were particularly proven against direct play and crosses into the penalty area, and Rakitic, Vitolo and Bacca contributed further forwards from within their defensive block (below), most commonly by screening. That they did so made their double pivot even more of a strength; a willingness to defend, and to duel as individuals and with aggression and intensity, is similarly essential for one of Emery's players, and largely because they can expect to defend for lengthy periods before being required to counter.

PSG competed against Europe's strongest teams in the Champions League, so they often defended with a reserved 4-5-1 (below) from which the influential Ángel Di María was often sacrificed so that Cavani could feature in midfield, and Neymar remained wide to lead their counters. If they were instead pressing with aggression, an attacking midfielder would advance to form a front two, and their wide midfielders would tuck infield to support either their double pivot or the lone defensive midfielder in an in-possession 4-3-3. Even if their potential to counter was reduced, they were more effective at defending the central lane and, like Sevilla, at forcing opponents and possession wide.

Arsenal relied on Xhaka, Guendouzi, Lucas Torreira and Aaron Ramsey to preserve their defensive balance, and varied between defending with a 4-2-3-1 and a 4-4-1-1, when the distances between the different lines of their structure and remaining compact were again priorities. Özil and Aubameyang were given wide roles when they were without the ball so that, like Neymar, they could provide a suitable outlet to lead counters.

If a higher defensive block (below) was instead being used, Aubameyang would often press higher on one side of the pitch than the right-sided wide player would on the other. The right-sided player would instead tuck infield to cover their two defensive midfielders; when Arsenal's number 10 advanced, Lacazette moved to cover, and attempts were made to force possession into a pressing trap that would involve surrounding the ball with numbers. They, regardless, did not prove as successful at doing so as they did when defending with their mid-block.

Arsenal, like Villarreal, were more effective when employing a mid-block and slightly dropping off before targeting the ball with pressure. Villarreal have regularly used a 4-4-2 mid-block from which they work to force play away from the centre of the pitch. That their shape is lead by two strikers makes it easier to do so, via the closest of the two engaging across the pitch to restrict the ball to one side. They are also effective at minimising the spaces between the lines of their shape.

From their 4-4-2 mid-block (below), the spaces between wide and central midfielders are likelier to be targeted by opponents, demanding Villarreal's central defenders aggressively move to press those spaces, and that their wide players track those making runs in behind. If their central midfielders are close enough, they will instead aggressively press forwards from within a narrower midfield that remains ready to press into a wide area if the ball has successfully been forced there.

On the occasions a more aggressive defensive approach is demanded, similarly to as was sometimes seen with PSG, a central midfielder advanced to add an additional number up front. If the wide forwards in a 4-3-3 have worked to recover back, four players are maintained in the second line of their structure.

It is that that Emery is increasingly demanding with El Submarino Amarillo. Should a central midfielder do so from their 4-4-2, he risks his fellow midfielders becoming stretched.

Their 4-4-2 mid-block has so far proved their most effective defensive approach. It encourages Villarreal to quickly attack after regains, or to secure possession before building with the numbers they offer in the centre of the pitch.