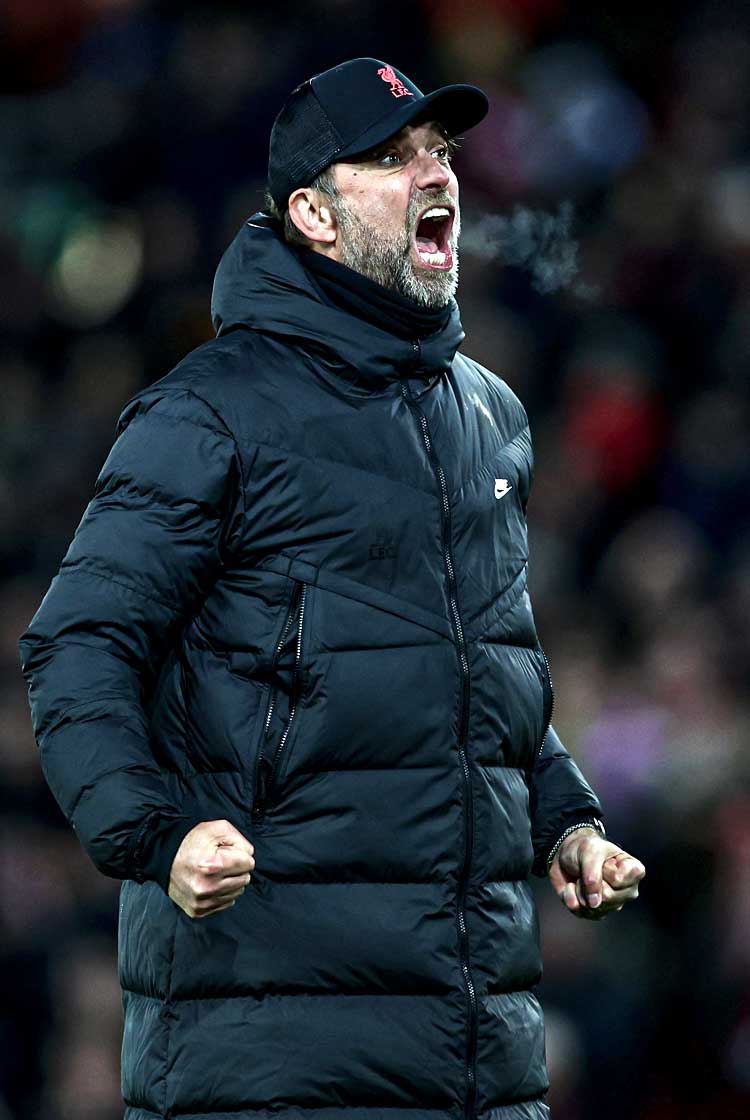 Counter-pressing is a strategy used to disrupt the opposition as soon as possession is lost – the point of defensive transition. It involves aggressively pressing the ball and the opponents near to the ball with several players. The aim is to win possession back as quickly as possible, before the opposition can settle on the ball.

Where does the term ‘counter-pressing’ originate?

Pressing, or applying pressure to the ball, is one of the five defensive principles of play, and has been an aspect of the game since football was invented. It grew in prominence from the 1960s onwards, when the likes of Viktor Maslov, Ernst Happel, Rinus Michels, Valeriy Lobanovskyi and Arrigo Sacchi all had their teams adopt an aggressive press.

More specifically, counter-pressing is a translation from the German word ‘gegenpress'. Many German coaches, including Wolfgang Frank, Ralf Rangnick, Jürgen Klopp, Thomas Tuchel and Julian Nagelsmann, have developed and used this strategy at various clubs.

When adopting a counter-pressing strategy, what do the players do when in possession?

In general, teams make the pitch as big as possible when in possession by placing players all over the pitch. The aim is to increase the space to play in and the distances that the opposition have to cover when defending.

However, if a team wants to counter-press, that will come into their thinking when they have the ball. The attackers must be close enough to the ball to be ready to press immediately, should possession be turned over. The balance that has to be struck here often dictates both how a team attacks and how quickly they can counter-press.

When adopting a counter-pressing strategy, what do the players do when out of possession?

The success of a team’s counter-pressing often relies on the players’ ability to react quicker than the opposition. Players will aggressively engage the ball-carrier as quickly as possible once a defensive transition has occurred. The aim is to regain possession immediately through tackles, interceptions and individual duels.

Other teammates then swarm around the ball, condensing the space the opposition has to play out, and form a compact structure. These teammates will either man-mark tightly, staying ready to press and engage their direct opponent should they receive a pass, or mark zonally, covering passing lanes between opponents to intercept the ball. A third option is that players will do a combination of the two approaches.

Which teams and coaches are best at counter-pressing?

The German used aggressive counter-pressing with great success at Borussia Dortmund. This was done high up the pitch in most domestic games, and in the middle third of the pitch against stronger sides in European competition. More recently, his Liverpool side have become known for their suffocating counter-pressing in all areas of the pitch (below). However, they have come to counter-press less with time, and have developed into a different side.

Guardiola has merged aggressive counter-pressing with his possession-based style of play. The use of full-backs who move infield, a false nine and inverted wingers mean his teams have extra bodies in central positions, ready to counter-press following a defensive transition. His Barcelona side focused on interceptions and covering spaces, whereas his combative Bayern Munich squad individually duelled and went man-for-man (below). With Manchester City, meanwhile, there has been an impressive blend of the two.

The former Leeds United manager asks his teams to aggressively counter-press all over the pitch. When in possession, his players rotate positions constantly and are free to move all over the pitch. Bielsa then relies on the players closest to the ball to aggressively swarm around the ball-carrier (below). He asks his players to man-mark when they press, with lots of defensive actions in the form of attempted tackles, duels and blocks.

With both RB Leipzig and Southampton, Hasenhüttl’s counter-pressing in midfield has proved a productive way of creating chances for his side through counter-attacks. From a compact 4-4-2 shape (below), his players crowd the space around the ball and limit the opposition’s chances of playing out of trouble. As teams then expand further to avoid the press, more space is created for Hasenhüttl’s side to exploit should they regain possession.

Which other coaches use counter-pressing most effectively

What are the benefits of counter-pressing?

The main benefit of counter-pressing is that it can lead to quick regains high up the pitch. This can then lead to chances, because the team is in possession close to goal and the opposition may have started to transition to their in-possession shape, which could leave gaps in their structure. Teams that counter-press well score lots of their goals following turnovers high up the pitch.

Counter-pressing is also ideal for sides that create chances through sustained spells of possession. If they win the ball back quickly, they will spend little time out of possession and chasing the ball. This means they can control the game.

Successful counter-pressing also stops the opposition launching counter-attacks, as the aggressive pressure can delay forward progress and even force the ball backwards. Even if a counter-pressing team doesn't regain possession, there is still a good chance they can force the ball out of play or concede a free-kick. These are both effective ways of delaying opposition progress.

Counter-pressing can also help to nullify specific opposing players who may pose a significant threat in certain areas of the pitch, by crowding them out.

What are the disadvantages to counter-pressing?

The main issue for teams that counter-press is the space they leave for the opposition to exploit. By committing players forward to counter-press, space is left in behind the back line. If the opposition manages to beat the press, the defence is left vulnerable to opposition counter-attacks, with overloads easier to create.

Successful counter-pressing relies heavily on organisation. If one player doesn’t fulfil their role properly, then the opposition stands a greater chance of beating the press. It also relies on individual players having the tactical intelligence to react quickly – almost instinctively – to a loss of possession. If players don’t have the game intelligence and concentration levels to press consistently, then the strategy can fail.

Due to the physical demands of counter-pressing, it also requires very fit and agile players. If one player cannot maintain the required output, then gaps will appear and the press will fail. Counter-pressing consistently over a prolonged period can lead to fatigued players, both late in games and over the course of a season.

What are the alternatives?

Instead of trying to regain possession immediately, players can delay the opposition by applying pressure without attempting to win the ball back, unless there is an obvious chance to do so. This blocking and screening of any forward play allows teammates to recover back into a more reserved defensive block.

Alternatively, teams can choose not to press at all, and make quick recovery runs back into a mid-block or low block.