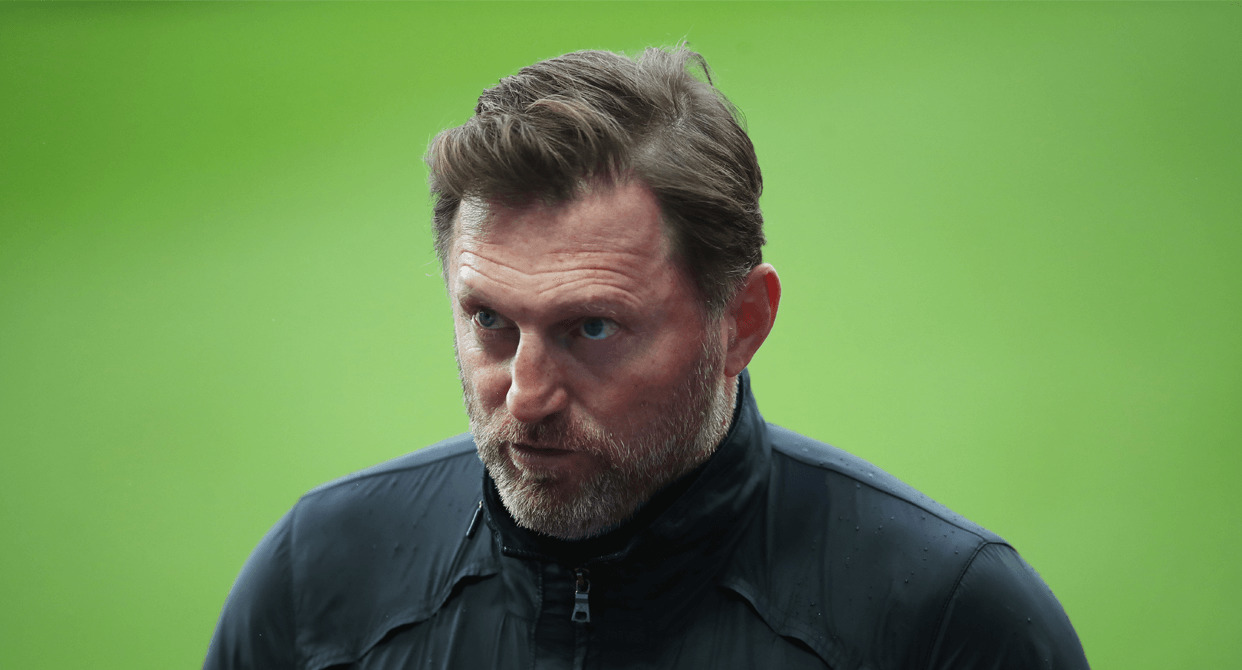 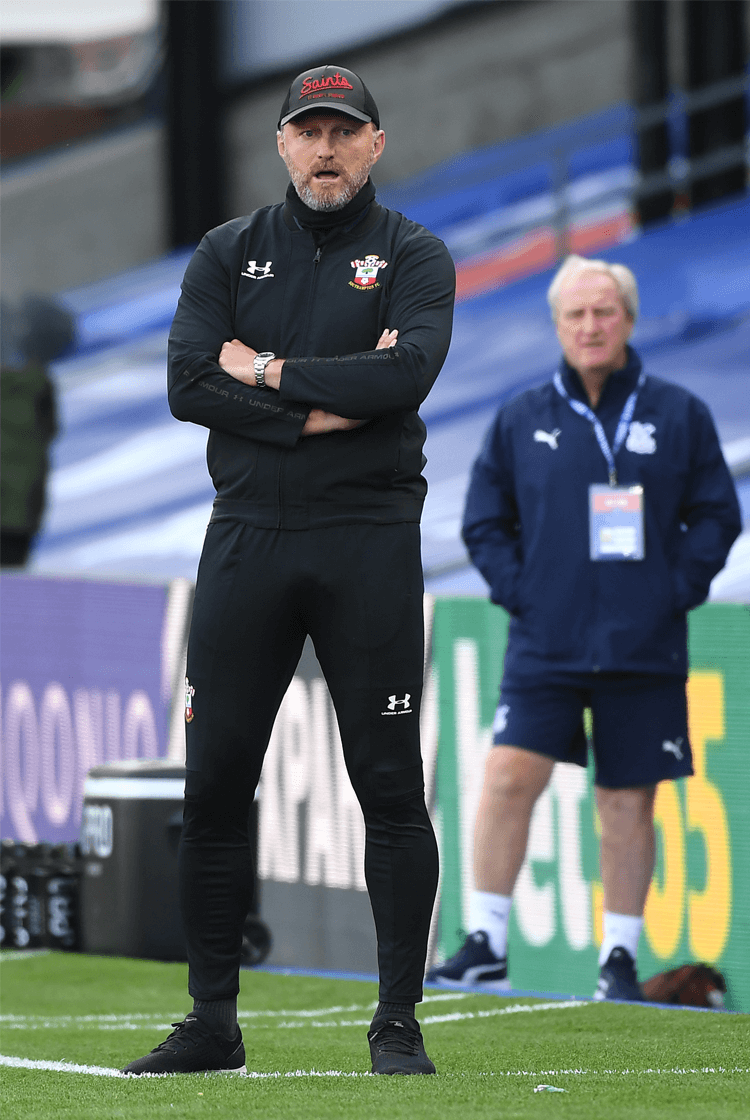 Profile
There is perhaps no Premier League manager whose reputation has been enhanced throughout the course of 2020/21 than Southampton’s Ralph Hasenhüttl. Despite a relatively thin squad – one that was battling relegation at the time of his appointment in December 2018 – and, by the standards of English football, a relatively small budget, he has transformed their prospects to the extent they are competing with the established so-called big six.

That that is the case is largely because of his nurturing of, among others, promising talents like James Ward-Prowse and Danny Ings, whose careers had stalled, his ruthlessness in selling those he considered expendable, and his ability to organise them and oversee so effective a press. "Southampton have an exceptional manager," Pep Guardiola recently said. "I know him a little bit from my time in Germany. (Red Bull) Leipzig played in a specific style. No surprise in their success."

Playing style
His teams' flexibility has long been central to Hasenhüttl's approach. At Ingolstadt of the Bundesliga he oversaw a 4-3-3 that featured wide attackers operating with little width on the outside shoulder of their opposing central defenders, in front of one, if not two, advanced attacking central midfielders. When Ingolstadt reached the attacking third (below) that 4-3-3 often became a narrow 4-2-3-1 or 4-2-4 in which their full-backs operated alongside their two deep-lying central midfielders to provide width, but largely resisted overlapping further forwards.

If an attack was progressing on one side of the pitch, the furthest wide forward drifted infield into a position as a second striker, owing to Hasenhüttl's desire to ensure numbers in the central lane – an orthodox striker was even often selected in a wider starting position to encourage that. Similarly significant was that 55 per cent of their league goals came at set-pieces.

A similar attacking approach at RB Leipzig was built on the foundation provided by a 4-4-2 that became a 4-2-2-2. Their front two remained advanced, but was supported by two wide midfielders who attacked infield, and two central midfielders who consistently offered cover. Their ability to attack on the counter – Timo Werner and Naby Keïta were both influential – and the variety involved in their transitions particularly impressed. Werner provided a threat in behind because of his pace, and he consistently played alongside either Yussuf Poulsen – who offered an aerial presence and the ability to link play with his back to goal – or Jean-Kévin Augustin, who contributed to quality combinations and had the potential to penetrate through limited spaces.

If seeking space elsewhere, Werner drifted towards the left, and the wider midfielders behind him – most consistently Emil Forsberg, Marcel Sabitzer, and Bruma – moved further infield to ensure they continued to have options around and between the opposing central defenders. They linked with Leipzig's front two, and from a deeper position Keïta drove forward through crowded areas of the pitch.

After experimenting with the back three he inherited from Mark Hughes at Southampton, Hasenhüttl, then aged 51, began building a team with similar methods to those seen with Leipzig. Ings and Che Adams have consistently formed their front two, and have been supported by the pace provided by Nathan Redmond, Theo Walcott, Stuart Armstrong and Moussa Djenepo as, nominally, Southampton's wide midfielders, either side of Ward-Prowse, Oriol Romeu, and Ibrahima Diallo.

They do not offer the same, explosive pace in behind, so Ings and Adams instead move slightly wider – not unlike Werner – to attack around opposing central defenders and wait for support from midfield, and they therefore offer fewer penetrations into the penalty area. During lengthier periods of attacking possession, Southampton's four midfielders form an attacking box that invites their full-backs to advance, even if their manager's preference is to continue to attack through the centre of the pitch (below) and to resist the temptation to attack with width and deliver crosses into the penalty area. Assists from open play from outside the width of the area are rare.

Defending and pressing
A team that places as much importance on attacking transitions as Hasenhüttl’s must also place an increased emphasis on its press. There was a time in the Bundesliga when only Bayern Munich, then managed by Guardiola, recorded a higher number of regains than did Ingolstadt under Hasenhüttl. The most attacking central midfielder in their 4-3-3 remained high to contribute to the aggressive press led by their narrow front three, and the double pivot behind him supported at the second phase – a similar tactic to the 4-2-2-2 with which Leipzig and Southampton later pressed. Opponents regularly seek to avoid the narrow press Hasenhüttl's teams apply, so the Austrian regularly instructs his players to use a trap that involves them containing possession in a wider area of the pitch via an outwards press (below).

His use of a front two also means that the opposing goalkeeper and central defender can be pressed in advanced territory, and also that passes into opponents at the base of midfield can be covered without a change of shape being required. The secondary press is most commonly applied from behind the ball carrier – perhaps via a striker pressing a defensive midfielder after first taking a central defender – to discourage teams from playing backwards in their attempts to resist pressure, and to instead risk playing into the centre of the pitch and into numerous opponents. To that end, Hasenhüttl's two central midfielders are also instructed to press with aggression.

Southampton's press, in comparison to Leipzig's, places an increased focus on regaining possession further forwards. Where Leipzig were more successful when pressing from a somewhat deeper mid-block and because of Werner's pace over a longer distance – they regularly won the ball near the halfway line and played the striker into space – Southampton use a flatter 4-2-2-2 (below). Leipzig also had to negotiate fixtures in European competition, giving them a more intense calendar and therefore making it more essential that their energy levels were preserved via a mid-block.

The 4-2-2-1-1 with which occasionally Leipzig, and previously Ingolstadt, pressed and that had started as a 4-3-3 and involved an attacking midfielder pressing from behind a lone striker has only been used at Southampton when Walcott has been selected in their front two. When Ings and Adams are favoured, they lack Walcott's – and, indeed, Werner's – potential to sprint in behind over an increased distance.

Similarly, Hasenhüttl’s full-backs are instructed to advance to support potential pressing traps in wide areas, and his central defenders to cover behind those full-backs. There have been occasions when Southampton have adopted a back three because a wider press has committed them to one side of the pitch. Their full-backs are regardless consistently required to remain energetic – their compact 4-4-2 risks one side of the pitch being too open if they struggle to cover the necessary ground, contributing to the fact that they overlap less than many of their rivals at other teams.