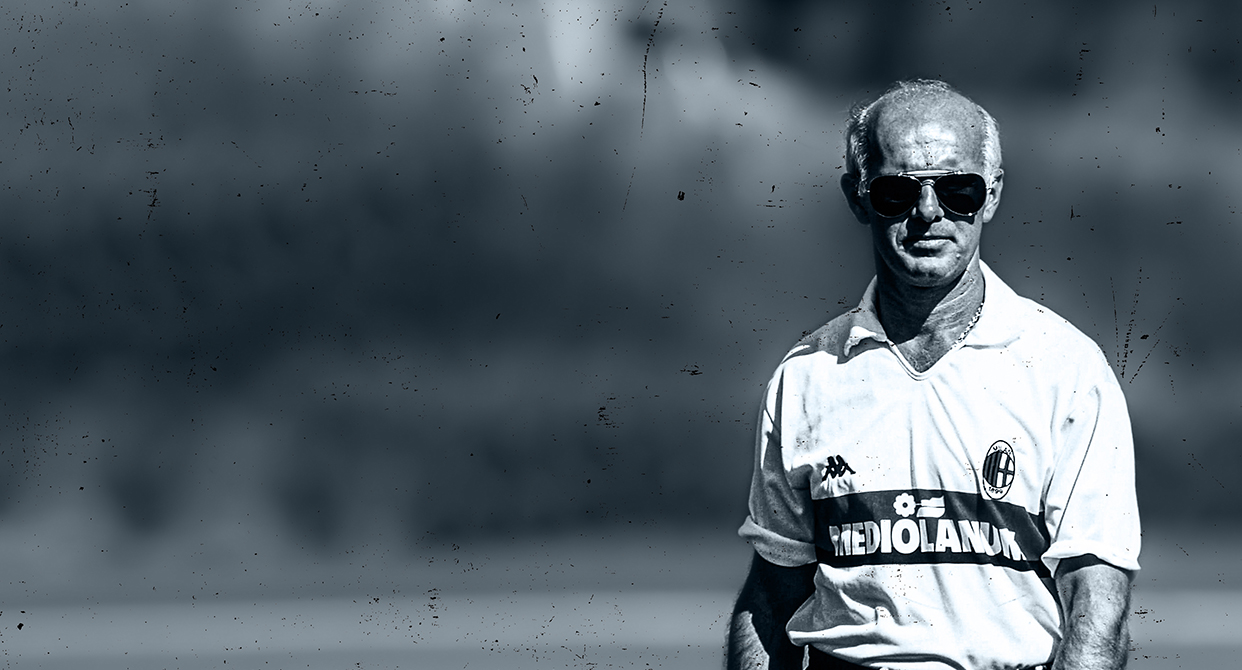 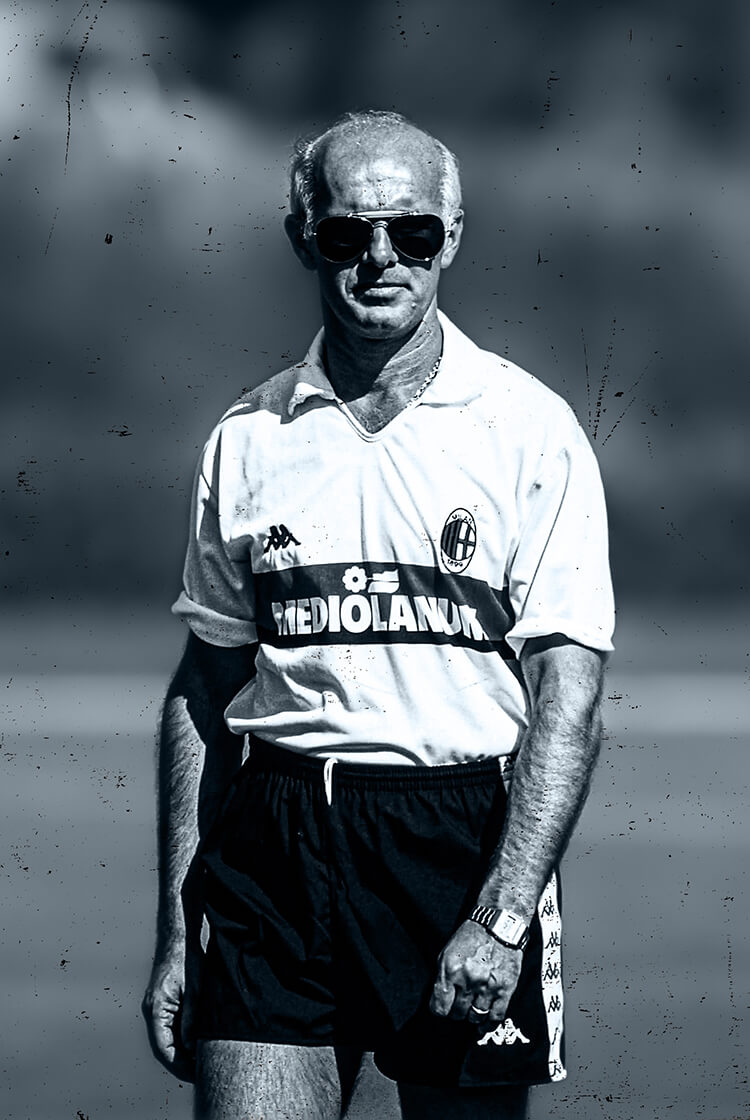 Profile
If a manager is to be defined by the best team they ever coached, then few in history can match Arrigo Sacchi.

In four seasons at the helm of AC Milan, between 1987 and 1991, Sacchi led his team to only one Serie A title – and that in his first year in charge, when he also claimed an Italian Super Cup. It is for the team’s exploits in Europe, however, that Sacchi is most revered. Back-to-back European Cup wins in 1989 and 1990 (below), followed by European Super Cup victories on each occasion, represent the product of a communion between world-class footballers and the work of a visionary, non-conformist and revolutionary coach.

Sacchi arrived in Milan to no great fanfare. He had spent all of his 14-year coaching career to that point operating in the lower reaches of Italian football, but he had led Parma to the Serie C1 title in 1986 – and in the following season his team fell only three points short of an immediate promotion to Serie A.

Along the way, however, Sacchi masterminded not one but two Coppa Italia wins over mighty AC Milan, with a style of play that captured the attention of Silvio Berlusconi. The Rossoneri’s majority shareholder acted quickly, appointing Sacchi as a replacement for the young caretaker manager Fabio Capello in time for the start of the 1987-88 season.

Zones and pressing were the concepts on which the Italian built his methodology. Sacchi was never in tune with Catenaccio – the ultra-conservative, defence-first philosophy that had traditionally dominated Italian football. Instead, he preferred to be influenced by the Dutch-inspired concept of Total Football that had emerged under the leadership of Rinus Michels in the 1970s.

Sacchi’s career at the top of football was, by modern standards, short and intense. He returned to Milan for a second spell after five years in charge of the Italian national team – during which he led them to the 1994 World Cup final – before his one and only season outside of Italy with Atlético Madrid. His final spell as a head coach came back at his old club Parma in 2001.

Unlike many of the great modern coaches, Sacchi had never been a professional footballer – but, as you might expect from a man happy to ignore decades of Italian football tradition, it bothered him little. “I never realised that to become a jockey," he famously replied when questioned on the matter, “you had to be a horse first.”

Style of play
Sacchi’s first job at Milan was to create a new team culture. He wanted his players to cast aside the traditional Italian mentality of defending close to their own goal, and instead become a proactive team that defended on the front foot against opposition attacks.

“The football I wanted was active also in the defensive phase,” he later wrote in his autobiography. “The players had to be protagonists through pressing.”

Sacchi educated his forwards in the work of putting pressure on their opposing central defenders in their build-up and control of the ball. This was based on a solid 4-4-2 formation, in which all players had to understand their positional relationship to each other.

The Italian coach insisted that his side should be in a short and compact block (below), with no more than 25 metres between the defensive and front lines. In this way, pressing did not represent a great physical effort for his players, and would allow those behind the first line of pressure line to organise and act immediately if that line was broken. This also made it very difficult for any opponent to find genuine and effective passing options.

In possession, Sacchi’s Milan was a dynamic team, always looking to create spaces to enable their progression towards the opposition half. The synchronised nature of their movements was the product of exhausting training sessions in which the head coach worked hard to educate his players in his very different philosophy.

And there were plenty of new ideas for the players to embrace: the concept of a zonal defence – something that allowed Milan to generate numerical superiority when the time came to press the ball-carrier; the progression of the full-backs to give depth to offensive advances, create more and better partnerships in attack, and allow the wide midfielders to move central; and the constant appearance of the defensive midfielders in more advanced areas.

All of these behaviours were with the same central tenet in mind: to build a team to control matches and, importantly, control the ball. To a nation of Italians more interested in – almost obssessed by – the defensive aspect of the game, and used to offensive actions being limited to just a few players, Sacchi’s style came as a huge surprise.

Offensive phase
Italian teams were used to retreating and defending in their own backyard. The culture of the libero, one defender in a position deeper than the rest of the defensive line, who acted as one final barrier between the attackers and goal, still reigned. The idea of defenders actually being used as agents of build-up was almost unknown.

At Sacchi’s Milan, though, the build-up started with the defenders. The back line, typically made up of Mauro Tassotti, Alessandro Costacurta, Franco Baresi and Paolo Maldini, was responsible for carrying the ball forward. In doing so, the defenders – and in particular the superb Baresi – forced their opponents to leave their natural zones and press the ball; this in turn created spaces further forward for a midfield line of four that featured Frank Rijkaard and Carlo Ancelotti at its centre.

Rijkaard and Ancelotti were the most common first receivers, with wide attackers Roberto Donadoni and Angelo Colombo also available (above) – but all four were instructed to move constantly with the same two objectives. First, to take advantage of any spaces created by their opponents leaving their shape to stop the ball-carrier; and second, to cover areas that might become exposed should they lose possession and face a counter-attack.

The use of the flanks in the 4-4-2 was essential to Sacchi’s offensive strategy – not only to take advantage of the whole width of the pitch, but also to give opponents more to worry about than they were used to. Donadoni and Colombo were both comfortable operating from the flanks, but they were equally happy making diagonal runs forward or shifting into central areas to combine with teammates. When they did so, the space was created for the full-backs – and in particular the rampaging Maldini on the left – to progress.

Sacchi was not averse to direct play, however, and in Ruud Gullit and Marco van Basten he had two attackers physical enough to win plenty of first balls and technical enough to carry a huge threat playing off the other.

Again, it was Baresi or Maldini – the two better technicians in the back four – who would most often play direct in to the front two; both Gullit and Van Basten were superb finishers and powerful in the air, but equally adept at combining with midfielders making late runs into advanced areas. This gave Sacchi’s team a hugely effective added dimension when facing teams that liked to employ a high press.

Defensive phase
Sacchi’s defensive approach was most defined by his use of the press, which he employed to exploit the offside law as it stood at the time. For him, offside was less a tool to protect his defence, and more the first step in recovering possession and beginning another advance towards the opposition half.

At that time, any attacker in advance of the defensive line was deemed offside – and Sacchi knew how to take advantage of this. He argued that his team should adopt an active approach in defence, rather than reactive, which resulted in the defensive line being set high, far from the goal defended by goalkeeper Giovanni Galli (below).

This move, in line with the offside rule, minimised any advance by the opponent. When Baresi, the leader of his defence, gave the order, the back line advanced as one, with the intention of blocking the ball-carrier and leaving any possible receivers offside. This facilitated the recovery of the ball and the beginning of counter-attacks that would often find opposition defences in disarray.

In using this tactic, Sacchi convinced his players that the best way to defend was not to run backwards towards their own area, but to apply pressure that reduced the useful spaces for the opposing attack. The offside rule thus became a tool of construction – or, as the man himself described it, a way of “attacking the opponents’ attack”.

If an opposing team managed to beat the press, the defence would drop and reorganise in a way that prioritised the protection of central areas and encouraged opposition attackers into wide areas, thus limiting passing lines into the penalty area. This is no different to how many of the world’s best club teams react to their press being penetrated now, although in this case it afforded Sacchi’s defensive line time to reform and once again look to catch their opponents offside.

The other important defensive aspect of Sacchi’s 4-4-2 formation was the use of two defensive pivots in Rijkaard and Ancelotti, which ensured that the distance between the lines was as limited as Sacchi demanded. The coach’s instructions required that the team move through all areas of the pitch as a short and compact block without cracks, but the design was always the same – to facilitate recovery of the ball, and thus start the next attack.

The Italian job
Sacchi succeeded Azeglio Vicini as the head coach of the Italy national team in November 1991. During his spell in charge, he used three main structures: his favoured 4-4-2, the 4-3-1-2 and 3-4-1-2, although the second and third of these were typically used when out of possession and with the objective of defensive reorganisation before re-engaging with the press.

First and foremost, Sacchi looked to retain the tactical ideas he had implemented to such great success with Milan. His team featured a core of those players – Baresi, Maldini, Costacurta, Tassotti, Donadoni and the younger central midfielder Demetrio Albertini – together with a selection of others who offered ability in link-up play and, in the case of Roberto Baggio, a supreme talent with the potential to unlock the best defences in world football.

In the offensive phase, the team started from Sacchi’s 4-4-2 shape. Antonio Conte and Donadoni offered width and depth on the flanks, while Baggio provided his significant threat through the middle. As with Milan, Italy played as a high and compact block in which the midfielders were regularly expected to get into scoring positions.

Defensively, Sacchi had more difficulty in establishing the pressing game he favoured at Milan. Players such as Antonio Benarrivo, Luigi Apolloni and Roberto Mussi had been educated in the traditionally Italian form of reactive defence, so their natural behaviour when faced with opposition attacks was to withdraw.

As with Milan, however, he looked to the double defensive pivot in midfield, bringing in the powerful Dino Baggio to sit alongside Albertini – the pair would eventually line up together in the 1994 World Cup final in the United States (above), in front of centre-backs Baresi and Maldini. Having kept the Brazil team of Romario and Bebeto out for a full 120 minutes, it was cruel indeed that Baresi and Roberto Baggio – respectively, the defensive heart and creative spark of the team – were among those to miss penalties in the resulting shootout.

So Sacchi would never be a World Cup-winning coach, but his work with a truly iconic Milan team earned him admiration across the world of football. And to develop and then implement an attack-minded philosophy that succeeded in the nation of Catenaccio was arguably a greater trick altogether.