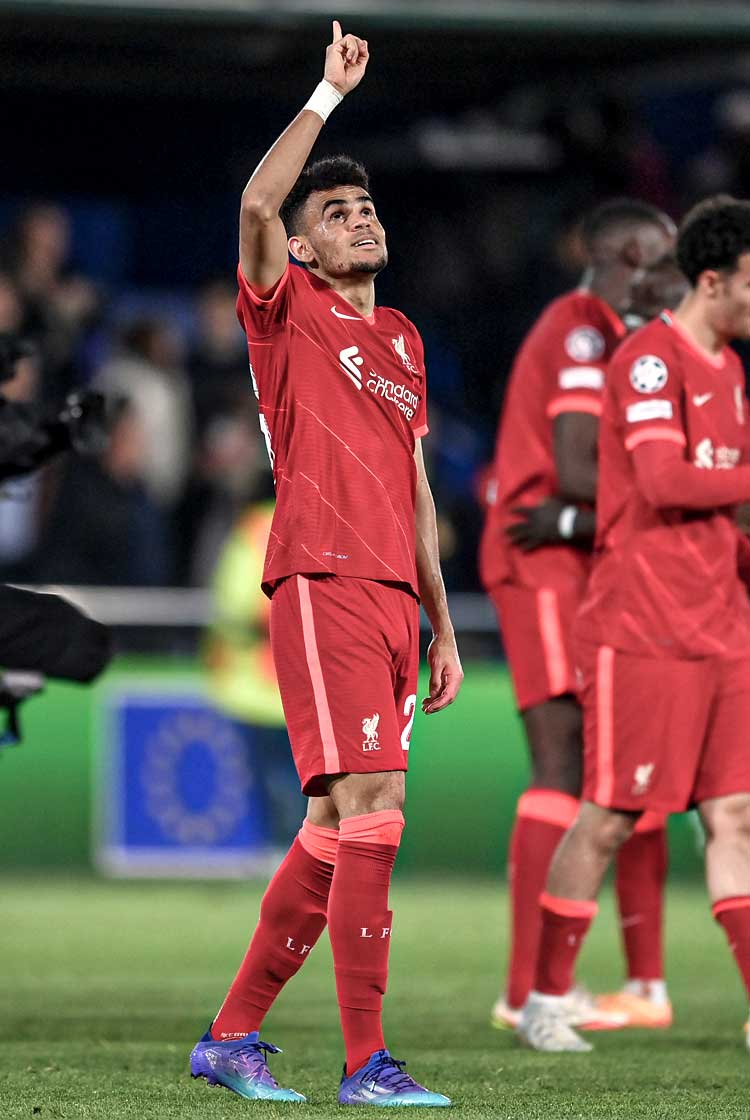 Liverpool will contest their third Champions League final in five years after surviving an early scare at Villarreal to progress. Having enjoyed near total domination of the first leg at Anfield, Jürgen Klopp's side came to Spain with very few expecting any difficulties at all. However, Villarreal started quickly, and swiftly went ahead on the night through Boulaye Dia, before former Tottenham midfielder Étienne Capoue set up former Arsenal man Francis Coquelin to level the tie at 2-2.

At half-time, Klopp introduced Luis Díaz, and as Liverpool finally settled into their natural rhythm, the game turned on its head. Three goals in the space of 12 second-half minutes – with a helping hand or two from Villarreal goalkeeper Gerónimo Rulli – saw Liverpool take an unassailable aggregate lead.

Klopp was effusive in his delight after the turnaround. “It feels so special because it was so difficult for us," he said. "Before the game, I told the boys I wanted the headlines to be the mentality monsters were in town. How we came back in the second half was so special. It was a top performance.”

Unai Emery set Villarreal up in a 4-box-2 formation in possession, with Giovani Lo Celso and Francis Coquelin ahead of Daniel Parejo and Étienne Capoue in midfield (below). Villarreal's width was provided either by the full-backs, by Lo Celso or Coquelin moving wide, or by a centre-forward running into the wide channels. Occasionally, Capoue drifted into the wider areas, too. This flexibility made Villarreal’s play unpredictable, and allowed individuals to take up positions in pockets that eliminated players in Liverpool’s structure. The front two provided width but also threatened the space in behind, while the two attacking midfielders also made penetrative runs from deep.

The key to Villarreal’s success in the first half was how they overloaded the Liverpool midfield. As the hosts built from the back, Liverpool pressed aggressively, with the front three engaging high. Thiago and Naby Keïta then looked to affect Parejo and Capoue, which left Fabinho with Lo Celso and Coquelin either side of him (below). The Liverpool centre-backs couldn’t step out because the two Villarreal forwards were pinning them back. This allowed Villarreal to play passes between the lines on a regular basis. In addition, as the Liverpool wide attackers engaged so high up the pitch, Villarreal’s full-backs had lots of space to advance into. Liverpool's full-backs occasionally helped Fabinho out by moving centrally to affect the second attacking midfielder, but this just gave the Villarreal full-backs even more space to advance into.

Midway through the first half, Villarreal switched to a lopsided 4-3-3 shape. Parejo played as a single pivot, with Coquelin to his left and Capoue to his right, while Lo Celso pushed up to play wide on the right. Gerard Moreno and Boulaye Dia took up more central positions, which allowed Pervis Estupiñán to join attacks down the left. Lo Celso played more like a winger, which created space for Capoue to make forward runs off the ball through the inside channel (below). In fact, two of these runs – one from the 4-box-2 and one from the 4-3-3 – led to Villarreal's goals, with Capoue contributing assists for both.

Liverpool set up in a 4-3-3 formation in possession, and tried to stretch their opponents, with Mo Salah and Sadio Mané on the shoulder of the defensive line and the full-backs maintaining the team's width (below). The aim was to try and take advantage of the narrow out-of-possession structure that Villarreal used. As Liverpool boast many players with an exceptional passing range, this approach made complete sense to eliminate as many Villarreal players as possible with a single pass, as opposed to playing shorter passes through crowded areas. The aim was for Liverpool to stretch Villarreal, and open up more space on the inside.

Why Liverpool struggled in the first half

Villarreal used a high-energy, man-oriented press in the hope of suffocating Liverpool’s possession in its early stages. The intensity of the press led to a large number of fouls being conceded, as the Villarreal players often continued their press through the player, rather than slowing down as they approached. This strategy disrupted Liverpool’s momentum, and was a key reason for the visitors struggling in the first half.

However, Liverpool started to notice that, when Moreno and Dia pressed the centre-backs, Parejo was drawn towards Fabinho, leaving Keïta free between the lines (below). The knock-on effect of this was Pau Torres leaving his slot to go and engage with Keïta, leaving more space in behind for Salah, Mané and Jota to run into. If Torres chose to hold his position, Keïta was free to receive, turn and advance. However, in the first half, the detail of Liverpool's passes was poor. They consistently lost possession through poor passing.

After the half-time introduction of Luís Diaz, Liverpool's game plan remained the same but was executed with much more quality. They continued to stretch Villarreal with their forwards and full-backs making the pitch as big as possible. The main difference in the second half was the fact that Liverpool scored a goal, as Villarreal then had to chase the game again. The first goal came about through an uncharacteristic forward run from Fabinho that took advantage of Villarreal’s man-oriented defensive approach.

Villarreal then had to engage further up the pitch again – and Liverpool, now in the ascendency, started to play with more confidence. They were able to create overloads as they played through Villarreal, which drew more opponents towards the ball and created more space in behind for the forwards to exploit. In the first half, the passes for these forward players were often wildly overhit, but Liverpool managed to find them with more precision after Fabinho's strike. They took advantage with two more goals to kill the tie.