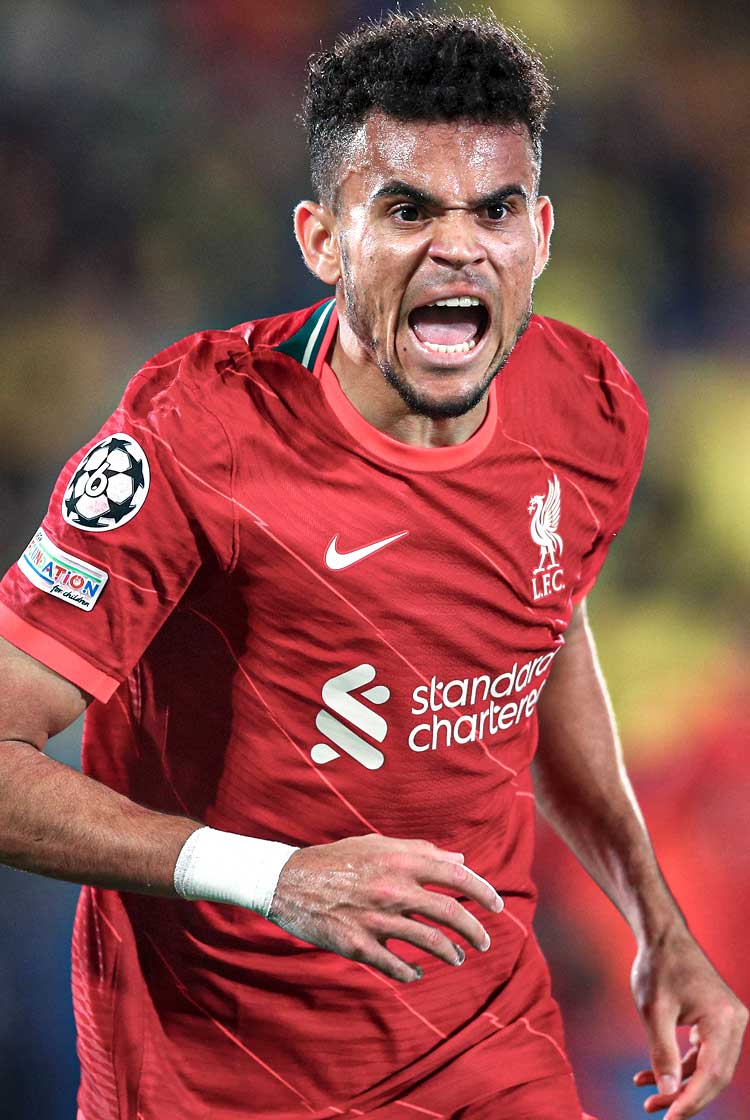 Luis Díaz had a remarkably instant impact at Liverpool following his January 2022 move from Porto. Liverpool initially planned on waiting until the summer to make their move, but their hand was forced when word got around of Tottenham’s interest in the Colombian, before a phone call from Jürgen Klopp helped convince Díaz to change destination. And yet, despite Liverpool being the Premier League’s top scorers in 2021/22 at the time, with a frightening first-choice front line of Mo Salah, Diogo Jota and Sadio Mané, Díaz worked his way into Klopp’s team. It was no surprise that he ended up starting in the Champions League final against Real Madrid.

Díaz had caught Klopp’s eye in Liverpool's two Champions League group-stage meetings with Porto earlier in the season, but even the Liverpool manager admitted he was surprised by how quickly Díaz settled in. "Every coach would say the same about a January signing,” Klopp said. “You do it, but if you could, you would do it in the summer. Yes, the start has been really good, but he is a long-term project for us and we are a long-term project for him. There is loads more to come."

Díaz is a quick, right-footed left winger who plays high up the pitch and often looks to run in behind. He will make runs laterally across the pitch to remain onside and ensure he is in a central position to receive a pass in behind (below). This out-to-in movement also allows him to receive on his right foot, making it easier for him to finish without breaking stride. He times his runs well, starting his movement as the ball travels into midfield and pre-empting a teammate playing him in. This gives him the best possible chance of breaking the last line and getting in on goal. At Liverpool, however, he will often come up against teams who leave little space in behind. Díaz has had to adapt his game to get into goalscoring positions against deep blocks.

Díaz’s dribbling is his greatest strength. He can change speed and direction at pace while maintaining close control of the ball. He is incredibly quick and explosive, meaning he can burst past opponents, but he can also decelerate at pace, too. This helps him open up passing lanes or create shooting opportunities, because his direct opponent will usually struggle to remain tight to him. This ability to create these openings is a big part of what makes him so dangerous; he regularly finds a way to progress up the pitch where others wouldn’t be able to.

When he gets up to speed, Díaz can either beat his opponent by cutting inside to combine or shoot or by going outside; his right foot is stronger, but he can and does use his left foot, too. His ability to decelerate after an initial burst is extremely useful because he can shoot, cross or pass from a more solid base than if he were travelling at full speed. Most of the chances he creates and his assists come from crosses or opportunities he has created for himself. Once he has isolated a defender, he consistently works enough space – often just half a yard – to pass or cross the ball to a teammate. He prefers to cut back on to his right foot (below), but he has worked hard on his left-footed delivery, because defenders will often try and show him down the outside. He is now almost as dangerous on that side as when cutting inside to bend a cross towards goal.

When he goes outside, he uses a longer touch before driving past his opponent to get to the byline. He prefers to look for a cut-back from these positions rather than lifting the ball with his weaker foot but, whichever option he chooses, he tends to aim for a specific teammate rather than an area. Díaz will often beat his direct opponent, which means the opposition must commit another player to the ball. This creates space for teammates inside the penalty area, and often frees up a teammate for Díaz to target.

Watching Díaz, it's clear to see his confidence. He is calm and composed in front of goal, and rarely panics when one on one with the goalkeeper, while he regularly plays no-look passes to throw his opponent off. When shooting, he requires little backlift to generate power. Combined with his dribbling ability, this makes him a threat against a congested defence in a deep block.

Outside the area, Díaz will dribble diagonally or laterally across the pitch to shoot with his right foot. He uses small touches to move the ball past opponents, often changing the ball’s path so that it moves slightly away from goal in order to evade defenders’ attempts to tackle him. This often means he is running at a right angle to the goal when he shoots (below), but he can rotate his body and shoot when off balance impressively. He has already scored some memorable goals from distance following dribbles off the left flank.

Without the ball, Díaz’s pace, agility and ability to change speed quickly make him an effective pressing forward, which would have been a large part of the reason Klopp wanted to sign him. He works hard to win the ball back, and will also press opponents from behind once he has been bypassed to force play into a more crowded part of the pitch, where a teammate can turn play over. He shows tenacity and aggression when competing in individual duels, and will burst forward to launch or support a counter-attack once the ball has been won.

Under Sérgio Conceição at Porto, Díaz was used on the left in a 4-2-3-1 or in a 4-4-2. When playing in a 4-2-3-1, Díaz moved into the centre of the pitch to provide a threat in behind and join the striker up front. When Porto played in a 4-4-2, they adapted their shape to allow Díaz to run in behind, while one of the two centre-forwards dropped into midfield. The full-backs were encouraged to push forward to provide the team’s width, and the midfielder on the right – usually Otávio – would drift inside. This created a midfield three, with Díaz in the front line in a 4-3-3 (below). The extra player in midfield allowed Díaz to remain in a central position in attack for longer. When the ball moved forward on the right, Díaz was expected to get close to goal and attack crosses.

Liverpool only ever start games in a 4-3-3, and Díaz has almost exclusively played on the left side of the front three. He plays almost as a left-sided centre-forward in what is a narrow front three (below), making his role similar to that which he played for Porto. While the centre-forward comes deep looking for the ball, Díaz will look to take up positions to threaten the space in behind the opposition.

He benefits from the false-nine movements usually made by Liverpool’s starting centre-forward. That player will drag a centre-back away from play to create space for Díaz to run or dribble into. The number of chances Liverpool create means plenty of chances come his way – but, due to the quality in their front line, there is less pressure on Díaz to shoot or score. It is no surprise that his shot volume decreased after joining Liverpool, yet he still provides a significant and consistent threat on goal.

Díaz’s wide-left position in Porto’s 4-2-3-1 enabled regular dribbles around the outside before putting a cross or cut-back into the middle. Porto’s centre-forward and number 10 were the targets for Díaz’s balls into the middle, while the full-backs pushed forward to provide attacking options further from goal.

When Díaz cut inside to cross on his right foot, the Porto number 10 often made runs towards the far post for him to target. This movement also allowed the right-sided midfielder to move inside to compete for second balls in a central position.

At Liverpool, the width on the left is usually provided by Andy Robertson, so Díaz takes up positions to receive in the inside channels. He uses the runs that Robertson makes to create room for a cross or shot; when Robertson pulls wide, he will also make runs on the blindside of the opposition's right-back to get in down the left before crossing (below).

Liverpool’s front three rotate constantly, and that means Díaz may well end up on the right side of attack. After making a run across the front line – having moved from the left to a central position – Díaz sometimes continues his run while Mo Salah drifts into the middle to threaten goal. Díaz is far less dangerous when shooting across goal from the right, however. Instead, he will usually look to beat his opponent on the outside before putting a cross into the middle.

There are many examples of South Americans successfully making the jump to Europe having made their name at Porto, but it is hard to think of many other January signings – hailing from any club or country – to have hit the ground running quite like Luis Díaz. The evidence so far suggests he has an extremely bright future at Liverpool.