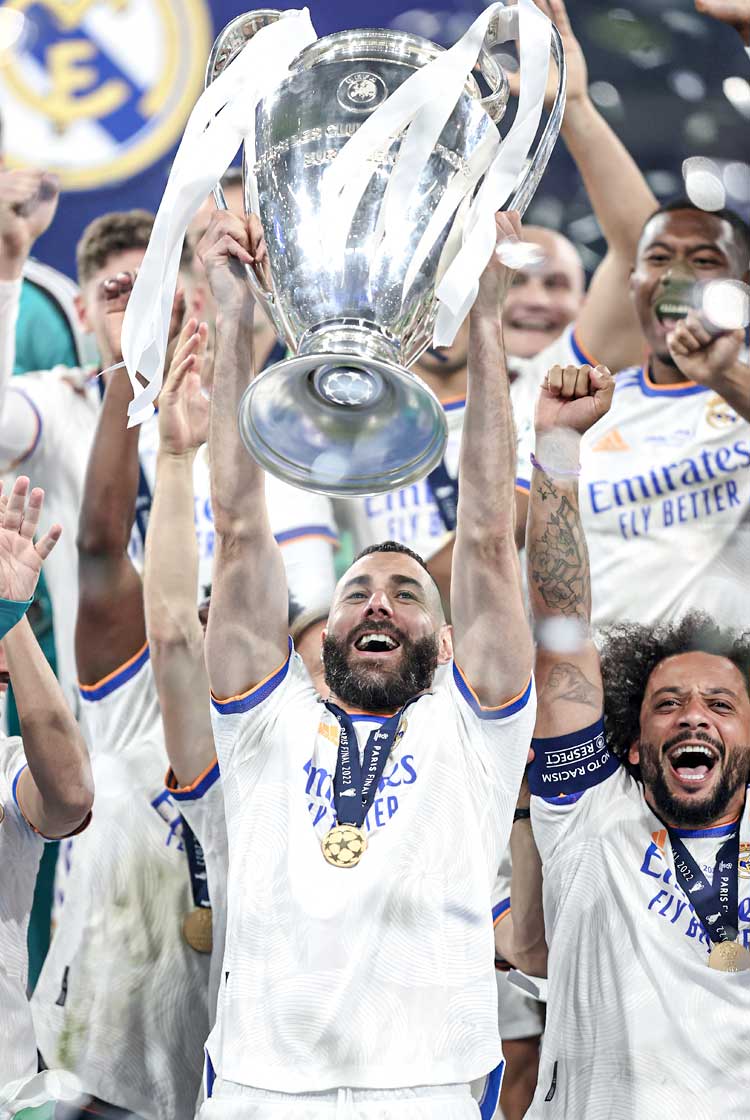 Real Madrid won a 14th European Cup or Champions League title as Vinícius Júnior's second-half strike proved the difference between the teams in Paris. Liverpool had the better of the chances – though Madrid did have a first-half goal controversially ruled out for offside – but were kept at bay by some extraordinary goalkeeping from Thibaut Courtois in the Real goal. The Spanish giants have now won twice as many European Cups as any other team, with some of this year's team, including Luka Modric and Dani Carvajal, celebrating a fifth Champions League win in the last decade. Carlo Ancelotti, meanwhile, is now the competition's most successful ever manager, with this his fourth title.

“I think Liverpool were strong," Ancelotti said. "But if you keep a high defence and give them room to attack behind you, that’s where you struggle, so our defenders did well to close those spaces. I think it helped that Liverpool were easier to decipher than the others, because they have a very clear identity and we could prepare the way that we did. We knew what strategy to take, don’t give them space behind the defence to run into.”

Opposite number Jürgen Klopp was defiant in defeat. "I have a strong feeling we will come again," he said. "The boys are competitive. We will have an outstanding group next season. Where's the final next season? Istanbul? Book the hotel."

Liverpool used a 4-3-3 shape in possession, against Real Madrid in a 4-4-2 block. Rotations on Liverpool’s right side appeared as though they might provide some joy early on, with their first chances created down that flank. Fabinho and Thiago formed a double pivot, while Luis Díaz attacked inwards from Liverpool’s left so that Andy Robertson could overlap, and centre-forward Sadio Mané dropped to connect the double pivot to the wide forwards (below). Liverpool’s lack of numbers on the left drew Madrid across to their right side; switches of play out to Díaz or Robertson also provided some early signs of promise.

As the first half progressed, Díaz’s inwards runs from a wide starting position tested Madrid right-back Dani Carvajal, especially with Mané moving over to pin the right-sided centre-back (below). In the inside channel, the two combined particularly well, and Thibaut Courtois was forced into a superb save to deny Mané. When Díaz delayed his movement inside, Robertson found himself in a position to cross more often. Liverpool’s right side continued to rotate, with Mo Salah moving inside Madrid left-back Ferland Mendy whenever possible.

Madrid spent long periods defending in a mid-block or low block. After going ahead, they dropped deep inside their own half. To protect Carvajal against Díaz and Robertson, Fede Valverde dropped back more consistently, and Madrid then defended with a back five (below). The central-midfield three covered the spaces between the lines, with Liverpool often unable to access the centre-forward who dropped into that area. Any central-midfield run from Jordan Henderson was covered by Madrid’s spare centre-back, with Vinícius Júnior positioned to cover Trent Alexander-Arnold’s advances, and Mendy marking Salah.

Jürgen Klopp’s last throw of the dice was to introduce Roberto Firmino and Diogo Jota, creating a box of four in attack (below). Firmino dropped through the right inside channel, allowing Salah to move across to receive between the lines or run beyond the Madrid defence. Time and again, though, Courtois denied him in what proved a man-of-the-match display. Jota and Mané rotated on the left of the narrow attacking line, with the full-backs providing the width. Despite breaking around and over Madrid’s back line on several occasions in the second half – especially when playing from left to right – Liverpool’s forwards couldn’t find a way past Courtois.

Real Madrid used a 4-3-3 attacking shape, and came up against a Liverpool side that pressed from a 4-3-3 out-of-possession shape. Toni Kroos and Casemiro rotated as Madrid’s single pivot, while Luka Modric tended to be positioned slightly higher. Early on, this was through the right inside channel, while Fede Valverde moved inside just enough to free up overlapping right-back Dani Carvajal (below). Karim Benzema drifted over to the left to get close to Vinícius Júnior, who Madrid repeatedly tried to play in behind Trent Alexander-Arnold.

It was no coincidence that, once Kroos and Modric got on the ball more consistently, Madrid began to establish some control of possession. They flipped their central-midfield structure when building, with Casemiro pushing higher and Kroos and Modric dropping (below). Valverde moved inside to support central midfield, often taking up Modric’s previous position, with the full-backs both moving forward simultaneously. Benzema continued to remain close to Vinícius, but Madrid looked most threatening when switching play from left to right, with Benzema then moving into the centre.

Madrid constantly faced a high press from Liverpool. Liverpool's front three pressed Real’s two centre-backs and goalkeeper, with Jordan Henderson and Thiago jumping out to Madrid’s double pivot (below). Modric dragged Fabinho over, leaving Benzema free as a dropping forward. Height from the two wingers created more room for Benzema, who held the ball up superbly before bringing others into the game. Real used a 4-4-2 to build against Liverpool’s high press in the second half.

Madrid’s most effective play in the second half came through combinations down their right. Although Modric roamed all over the pitch, Madrid threatened most through patterns of play that saw him drop and move wider. Width from Valverde and Vinícius stretched Liverpool’s back line, with Carvajal moving inside to try and draw Robertson out of position (below). Ultimately, the match-winning goal came from build-up on Madrid’s right, before Vinícius came in from the left to finish and claim yet another Champions League win for Real Madrid.